There’s nothing better than nonsensical movie tie-in toys. Who thought a Mr. Potato Head version of X-Men’s Wolverine would be a good idea? Who at Hot Wheels thought it would be clever to sell Wonder Woman’s Invisible Jet as a package with literally nothing inside?

The 90s were probably peak “Wild West” for outrageous toy tie-ins thanks to Happy Meals and Transformers (those things were everywhere, right?), but by no means has this tradition gone away. Now, with basically the entire slate of Marvel Superheroes entering true legend status thanks to the insane success of the latest crop of movies, toy manufacturers have more well-known characters to confuse people with than ever before. We came across some hilarious and totally unnecessary Marvel toy car tie-ins that we wanted to share with you. They don’t make any sense at all, but most of them are still pretty cool, and if your kid loves superheroes, this could be a great way to start them on the path to becoming a little gearhead as well.

First up, we’ve got Cap. Steve Rogers, aka Captain America, is the quintessential American action hero. The character is a representation of who we all should strive to be. He demonstrates absolute selflessness, true leadership, unrelenting resilience, but above all, an ungodly amount of superhuman strength. So, what better car to pair with the Boy in Blue than a 2006 Mustang? Has Cap ever driven this car in any of the movies? Nah, why would he? Mr. Rogers is a motorcycle guy, after all. But if we’re going to make totally arbitrary connections between cars and superheroes, you could do worse than sticking him in some pure American muscle. Interested in picking this up? You can do so right here. 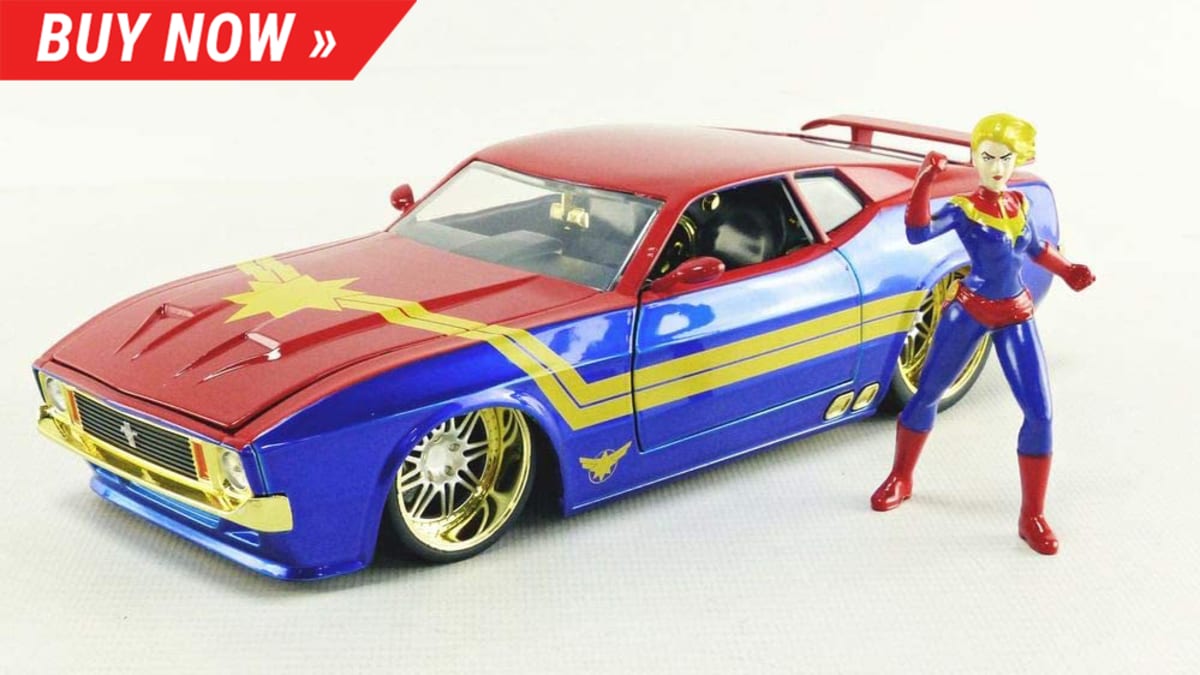 Captain Marvel, otherwise known as Carol Danvers, is a character that has been around for decades, but never really broke through to the mainstream until very recently thanks to the fantastic big-screen portrayal by Brie Larson in 2019. If you’re unfamiliar with the character, just imagine Captain America, but for outer space. We know there’s at least one car floating around in space, but it’s definitely not a 1973 Mustang. Danvers, in both the movies and the comic books, is primarily concerned with flying planes when she’s not doing space stuff, not driving cars. Also, she’s basically the Marvel universe’s version of Superman, so there’s really no reason for her to use any vehicle of any kind to get around. Regardless, this is definitely a cool design, so if you’re looking for some sweet Captain Marvel bling for your shelf, you can check this out right here. 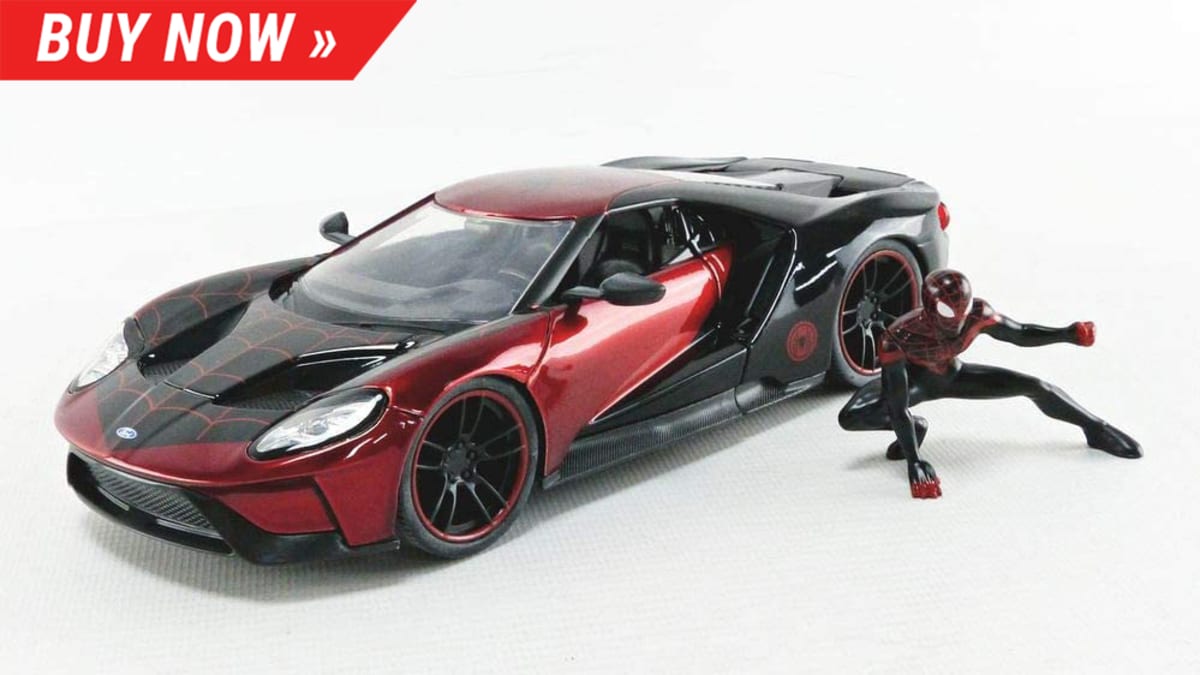 If you’re not an uber-nerd then you might not know that there are multiple versions of every major superhero. No, really, every major superhero. Bruce Wayne, Dick Grayson, and more have worn the Batman Cowl. Tony Stark, James Rodes, Riri Williams and even Dr. Doom have donned the Iron Man suit. Even the Superman moniker has been shared between Clark Kent, John Henry Irons, Martian Manhunter and more. But the one hero that has more alternate versions than any other is Spider-Man. Spidey has easily hundreds of versions that exist throughout the comics, movies, and games, but other than the O.G. Peter Parker, only one stands above the rest as the best “second up” character to ever take up an already legendary mantle. We’re talking about the incomparable Miles Morales. Miles debuted in a 2011 comic and has been growing in popularity ever since. The character was recently thrust into the spotlight thanks to the jaw-droppingly good animated movie, Spider-Man: Into The Spider-Verse from 2018. If you know anything about Miles though, you know that he’s most often portrayed as a middle-class 13 year old kid. Outside of the fact that a 2017 Ford GT would cost an actual fortune, the kid wouldn’t even legally be able to drive it. Maybe the Avengers dropped it off as a “thank you” after a mission? Or maybe whoever made these toys were just throwing darts at a poster on the wall to pair up the heroes with their cars. Anyways, regardless of realism, the Ford GT will never not be sexy, and Miles Morales has one of the best Spidey suits that exists, so the mash-up is still a fun pairing. You can check it out here. 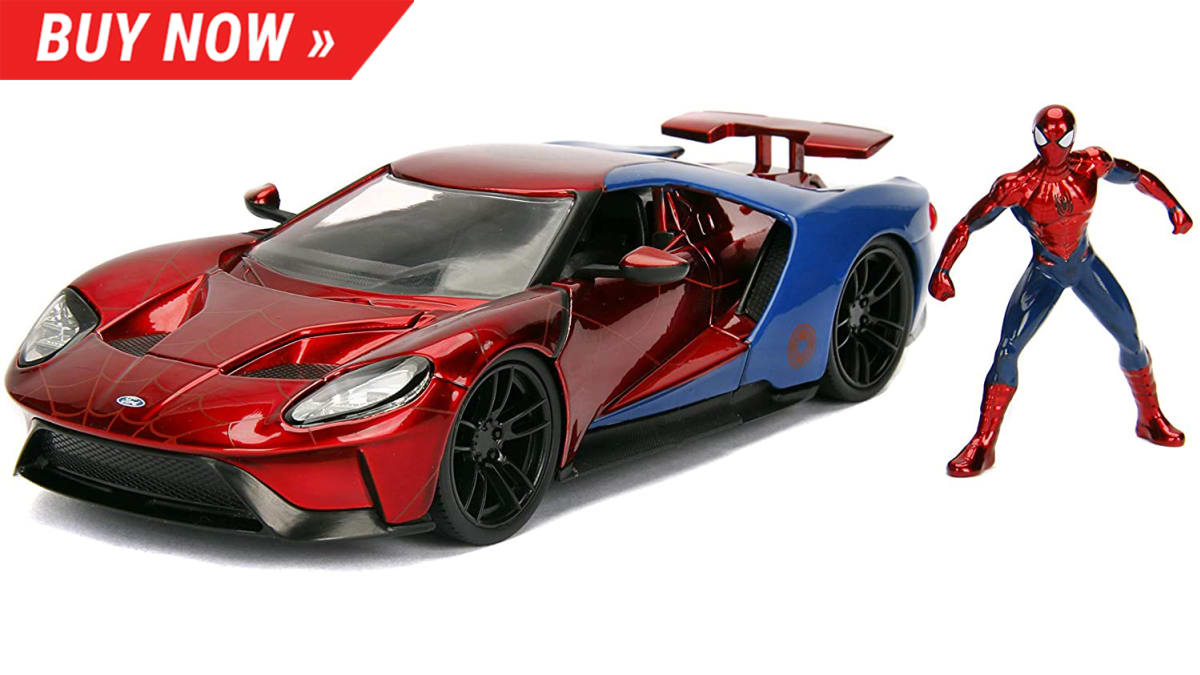 If that last guy looked familiar but you’ve never heard of Miles Morales, then you’ll probably be much more familiar with the name Peter Parker — The Spectacular Spider-Man. For our money, Spidey is probably the best superhero ever dreamt up and certainly one of the most popular, worldwide. This version of the character has been the most visible for going on 60 years now. For once, there actually is a version of this character heavily associated with a vehicle! The Spider-Mobile debuted in 1974 and stuck around for, well, probably way too long, but the important thing to note is that it definitely never looked anything like a 2017 Ford GT. Why pair the Spider-Men with Ford GTs? Because they’re fast and agile? Who knows. Again though, they did a nice job making the design not totally ridiculous. And this one’s got a big wing on the back, too. If you’re looking for a Peter-Parker-style GT, you can find it right here. 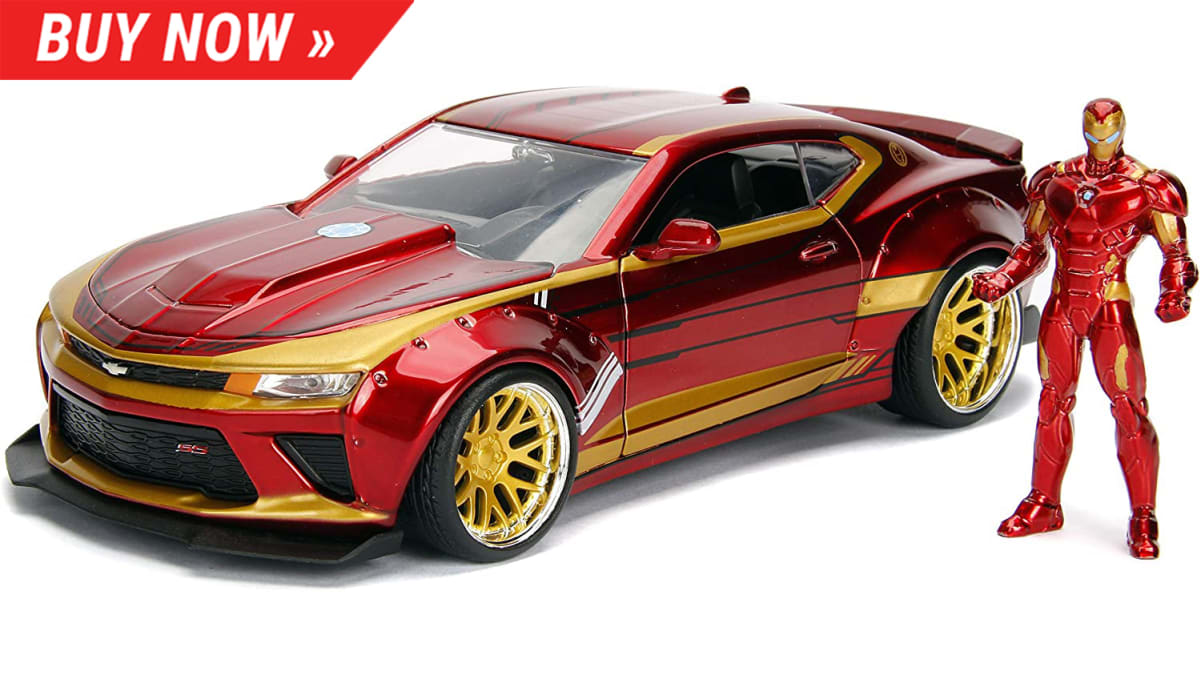 Last but not least, we come to the character that’s most to thank for Marvel’s current worldwide popularity. The billionaire, playboy, philanthropist himself: Tony Stark, aka Iron Man. This mash-up is maybe the funniest of all, because of all the characters in this list, Iron Man actually has a specific brand of car that he’s heavily tied to in nearly all of the movies. Is that brand Chevrolet? Of course not! That would be too easy. In the movies, Stark is an Audi enthusiast through and through. Never has he driven or even mentioned a 2016 Camaro. Despite that, this is one of our favorite designs here. It’s loud and maybe a bit gaudy, yes, but if that ain’t Iron Man, we don’t know what is. You can check out the toy right here.