It will be a while yet before we get unrestricted access to the 2021 Ford Bronco and Bronco Sport, but as part of the company’s “Bronco Day” celebrations the second week of August, Ford invited media out for a sneak peek and ride-along in both the new two-door Bronco and the “Baby” Bronco Sport at the new Holly Oaks ORV park in Holly, Mich., to get a feel for its new 4x4s. Let’s get this out of the way straight from the top: These suckers are the real deal.

Ford had two trucks present for ride-alongs: a two-door Bronco and a Bronco Sport. Both were Badlands models equipped with optional off-road tires that were crucial for the loose surfaces and grades we encountered at the park. The Bronco was equipped with the base 2.3-liter, 270-horsepower turbocharged four-cylinder and seven-speed manual transmission – that’s six traditional forward gears, plus a crawler gear for off-road purposes. The Sport was equipped with the more powerful of the model’s two available engines – the 2.0-liter, 245-horsepower turbo-four – which is standard on Badlands models.

The Bronco Sport’s Badlands model isn’t quite as rugged, but it still packs the model’s most trail-friendly all-wheel-drive system. While lower-end Sport models get a pretty typical setup for a streetgoing crossover, the Badlands gets an upgraded system with a twin-clutch rear drive unit that enables torque vectoring for improved power distribution and control. It also gets 28.5-inch Falken WildPeak all-terrain tires on 17-inch wheels and, like its big brother, a seven-mode GOAT system.

When you look at them on paper, the basic story is pretty clear. The Bronco Sport tops out right about where the basic Bronco checks in, offering 8.8 inches of ground clearance and reasonable approach/departure angles, but as you work your way up to a Bronco Badlands, especially one with the optional Sasquatch package (which adds 35” tires), there’s really no contest. With more than 11 inches of ground clearance, quite a bit more suspension travel and an additional foot of water fording depth, the Bronco is always going to come out on top. 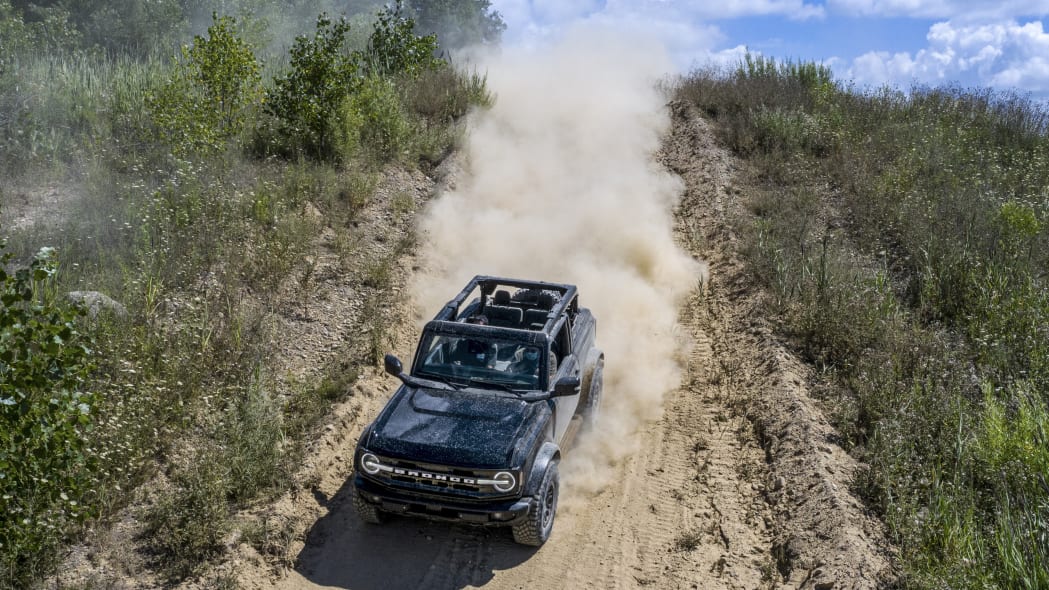 We started off in the Sport, and to our (pleasant) surprise, we headed right up the same loose incline we’d seen the two-door Bronco tackling just moments before. Credit Ford’s tire selection for this one. The Sport charged right on up with zero drama. In fact, it wasn’t until our Ford driver deliberately put his foot in it on a loose, level surface that the Sport ever got squirrely. The all-wheel-drive system allowed the driver to hang the rear end out at speed and stay on the throttle, converting what at first felt like chaos into a composed – if aggressive – four-wheel drift.

From there, we diverged from the trail shared with the big Bronco, bypassing the articulation and break-over tests, which were planned to showcase the body-on-frame Bronco’s more flexible suspension. The Sport also got its own, shallower water feature.

The Sport is not going to draw buyers who want a seriously capable 4×4, but like Jeep’s various crossover-based Trailhawk models, it’s not to be dismissed out of hand. While we might be inclined to prefer the little Renegade’s smaller footprint for tighter trails, the equivalently sized Compass will definitely have its hands full dealing with the turbo-powered Bronco Sport, with one key exception.

Unlike the smaller unibody Jeeps, the Bronco Sport is not offered with any sort of two-speed transfer case or other reduction solution, meaning it is not likely to be the best option for low-speed crawling. If you’re keeping the speed up, as we were at Holly Oaks, you won’t miss it; if you’re looking at some hardcore rock-crawling or trails with serious downhill grades, you’re going to have to approach them with a great deal more finesse – and in the case of the downhill sections, a whole lot of brakes.

That said, we weren’t crawling in the big Bronco, either. After a five-minute break, we hopped into the two-door model and set off up the hill yet again, which turned out to be just the start of a pretty wild roller coast ride. We weren’t allowed in the driver’s seat, and competitors like the Jeep Wrangler weren’t available, so we can’t offer any meaningful comparisons. But we can say that the Bronco makes use of its independent front suspension where it counts, improving ride quality significantly over broken terrain, and from our brief exposure, the compromises don’t seem like deal-breakers.

While bombing around didn’t show off the Bronco’s ability to finesse tighter or more difficult trails, it did reinforce Ford’s confidence in the Ranger-based 4×4. Save for the articulation and break-over obstacles, which were approached using the Bronco’s uber-short crawler gear (and the former only after disconnecting the front sway bar via the dash-mounted toggle), we hit everything at speed – including the water bath, which we entered with enough gusto to splash water up and over the windshield and into the open cabin. 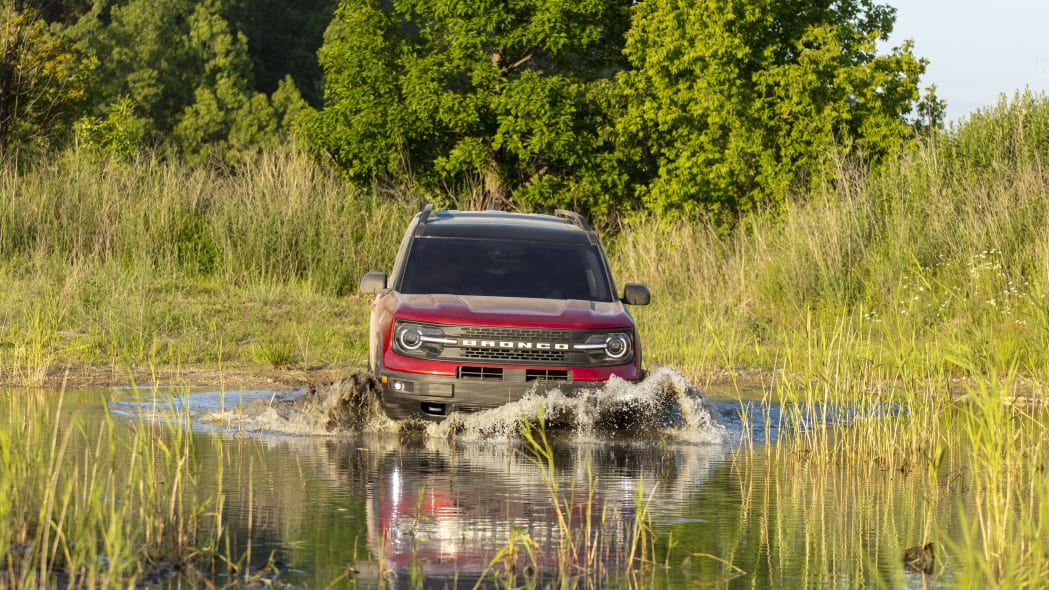 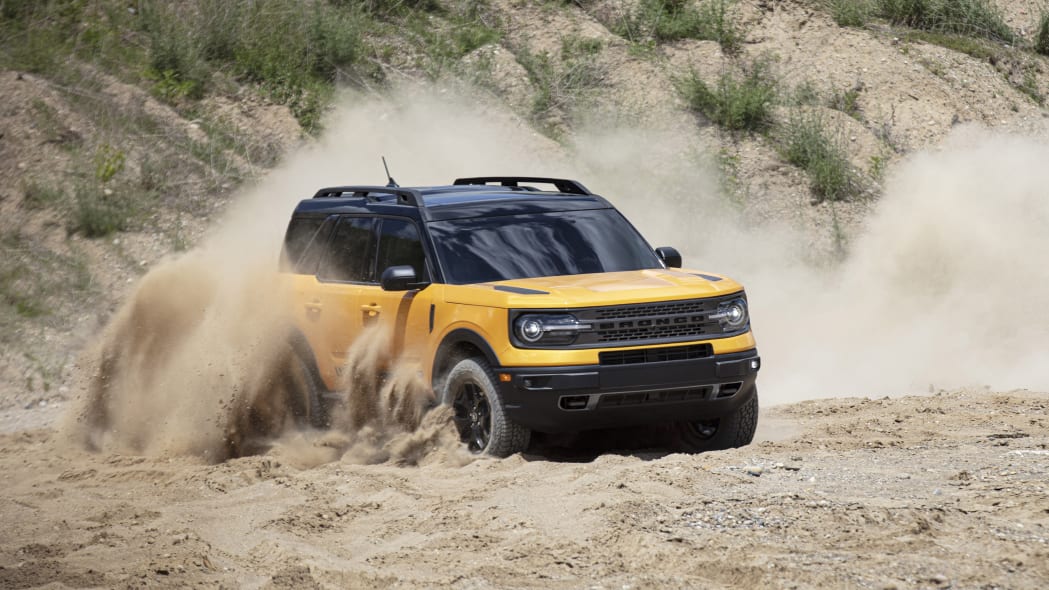 Ford urged us to avoid paying too much attention to the parts and materials used in either truck’s interior, stressing the fact that they were effectively pre-production prototypes without all of their final, production-spec parts. That’s fair, but we couldn’t help but look (and yeah, feel) around a bit on our rides, and what we saw was largely promising.

The Bronco Sport has an Escape-like feel to it, which isn’t surprising given that it’s based on the same platform. The look and materials up front are unique enough that you don’t feel like you’re just in an Escape that had some cosmetic surgery done, but once you start looking at the rear portions of the center console and the second row of seating, the Bronco vibes fade quickly. The Escape is already a pricy crossover, so we could see some people being let down by the similar materials in the equally expensive Bronco Sport.

As for the big Bronco, well, it has a very Wrangler-like feel to it, for better or for worse. Squint enough that the details fade out of focus and you could probably convince yourself that you’re actually in a Jeep. That’s no bad thing. While a Wrangler makes for a fairly ho-hum daily driver, its purpose-built, compact cabin shrinks around you as you move off-pavement and need to be able to quickly identify where your rig ends and the big, mean rocks begin. A front-facing trail camera that can be activated at low speeds helps expand your visibility.

From what we can tell, the 2021 Ford Bronco Sport will do a convincing job of straddling the line between rugged road-goer and occasional trail work. While it may lack a low range setup, it offers gutsy powertrains that are head and shoulders above what you’ll find in a Jeep Compass (or a Subaru Crosstrek for that matter, while we’re talking about lifted crossovers without low-range gearboxes).

We’re eager to get the big 2021 Ford Bronco out on some trails to see just how it handles the rugged, low-speed stuff that has made the Wrangler the darling of car-based rock crawlers. At this point, we should be mere months away from finally getting that chance, but based on what we’ve seen so far, we can’t help but be cautiously optimistic. Stay tuned!