That didn’t take long. The 2021 Ram 1500 TRX was only revealed yesterday, but the configurator is already up and running. Here’s the link.

We surveyed the room to see how all of us would spec out their supercharged pickup. For a truck that starts above $70,000, there are a surprising number of option boxes available to check. If money doesn’t matter, you can spec out a TRX that’s over $90,000. Even reasonably-equipped trucks will crest $80,000 quickly.

There isn’t unanimous agreement about whether we like the truck or not either. Spoiler alert: Green Editor John Snyder isn’t a fan. Fuel economy in Challenger and Charger Hellcats can easily dip into the single digits when driven aggressively, and we can guarantee that the truck will only be worse. Others adore its silliness and FCA’s current strategy of shoving its supercharged V8 into any vehicle that will accommodate one. We could go for a Pacificat next. The Previa can’t have all the supercharged minivan fun.

Read on to see our builds, and let us know how you’d spec a TRX out in the comments below.

Road Test Editor Zac Palmer: There’s no making this truck cheap. The TRX is extremely expensive, and anybody buying one will just have to accept it. That’s why I’ve decided to go nearly all out with my build. After all, if you’re paying luxury car money for a vehicle, you might as well enjoy a luxury experience.

My TRX costs $88,665. It has $16,975 worth of options on it, which isn’t entirely out of the ordinary for trucks these days. On the outside, I chose the bright Hydro-Blue Pearl paint. For only $100, I couldn’t say no to a color. The TRX would look menacing in black or gray, but I think a bright color is much more fitting for an off-road play truck. I also went with the all-black non-beadlock wheels, because I prefer the look and probably don’t need the capability. Rock rails and the bed-mounted tire carrier were also on my list. It’s not like I want to carry a tire around in my bed, but it sure does look the part. Again, this is a silly truck. Optioning it with silly add-ons is what it deserves. The interior options are boring, but I was able to spruce it up a smidge with TRX red interior accents.

My biggest purchase was the TR2 trim package, though. You get … well, pretty much everything for $7,920. Ram does luxury better than any other truck maker right now, and it’s good enough that I’d want to spend my make-believe money on all the features and fancy materials you get with the package. Now, time to go make some supercharger noises. 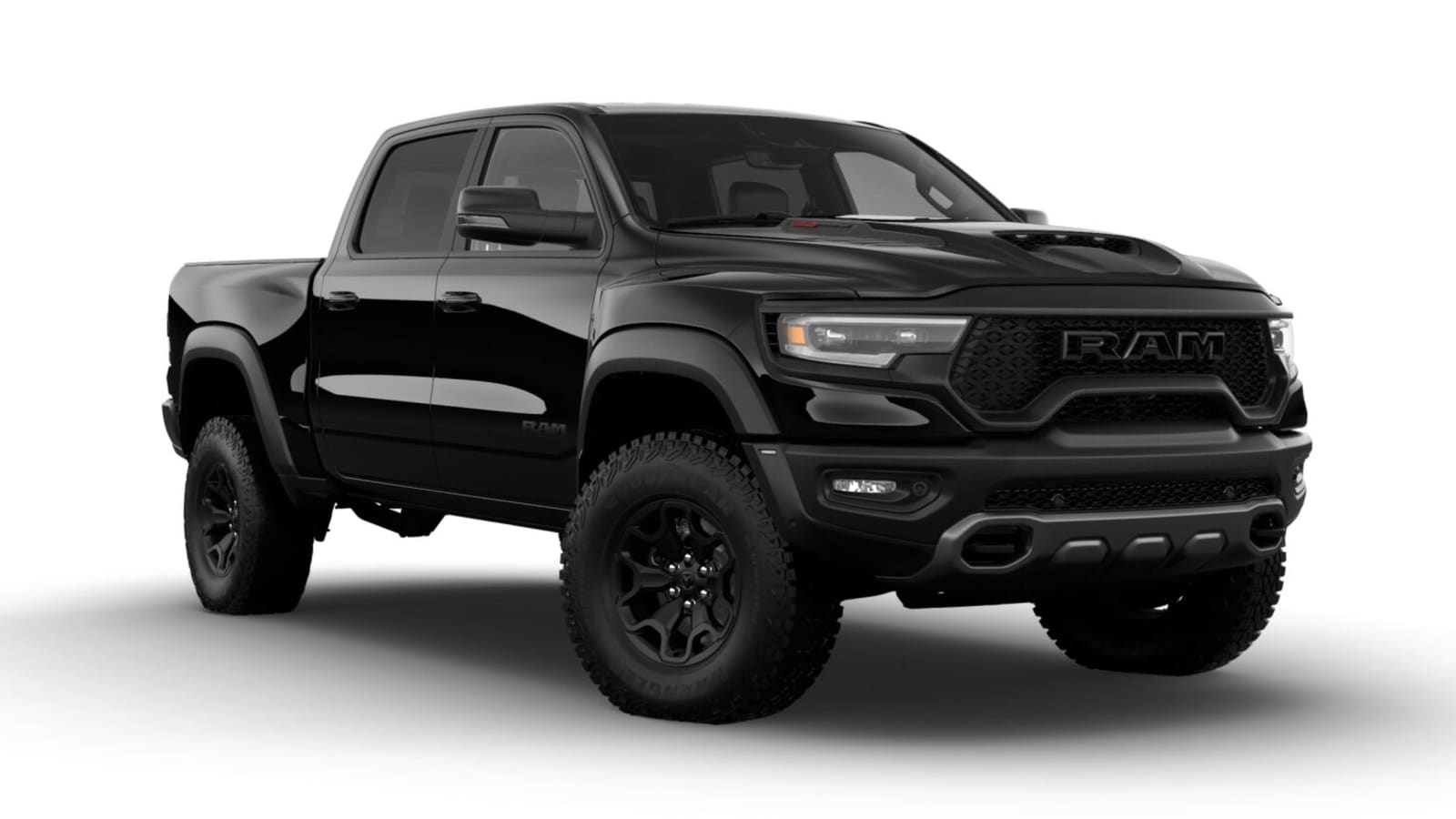 Senior Editor, Green, John Beltz Snyder: The only way I’m buying this is if the Truck Gods emerge from the woods and tell me I either have to buy this thing or sacrifice my large son to them. The only option I really want is adaptive cruise control (part of the $995 advanced safety group), but this forces me to get the $7,920 Level 2 Equipment Group. So be it. The Truck Gods already have me at their mercy, might as well spend another 10 grand to keep my family safe on the road, and enjoy the ventilated seats along the way. That’s it, though. That’s my build. I’ll get a bedliner elsewhere.

Wait, I have to pay $100 for a monochrome exterior, just so I don’t have to pay more for two-tone paint or graphics? I can hear the Truck Gods now: “We are altering the deal. Pray we don’t alter it any further.” Total price: $80,705. My son better really like this truck. 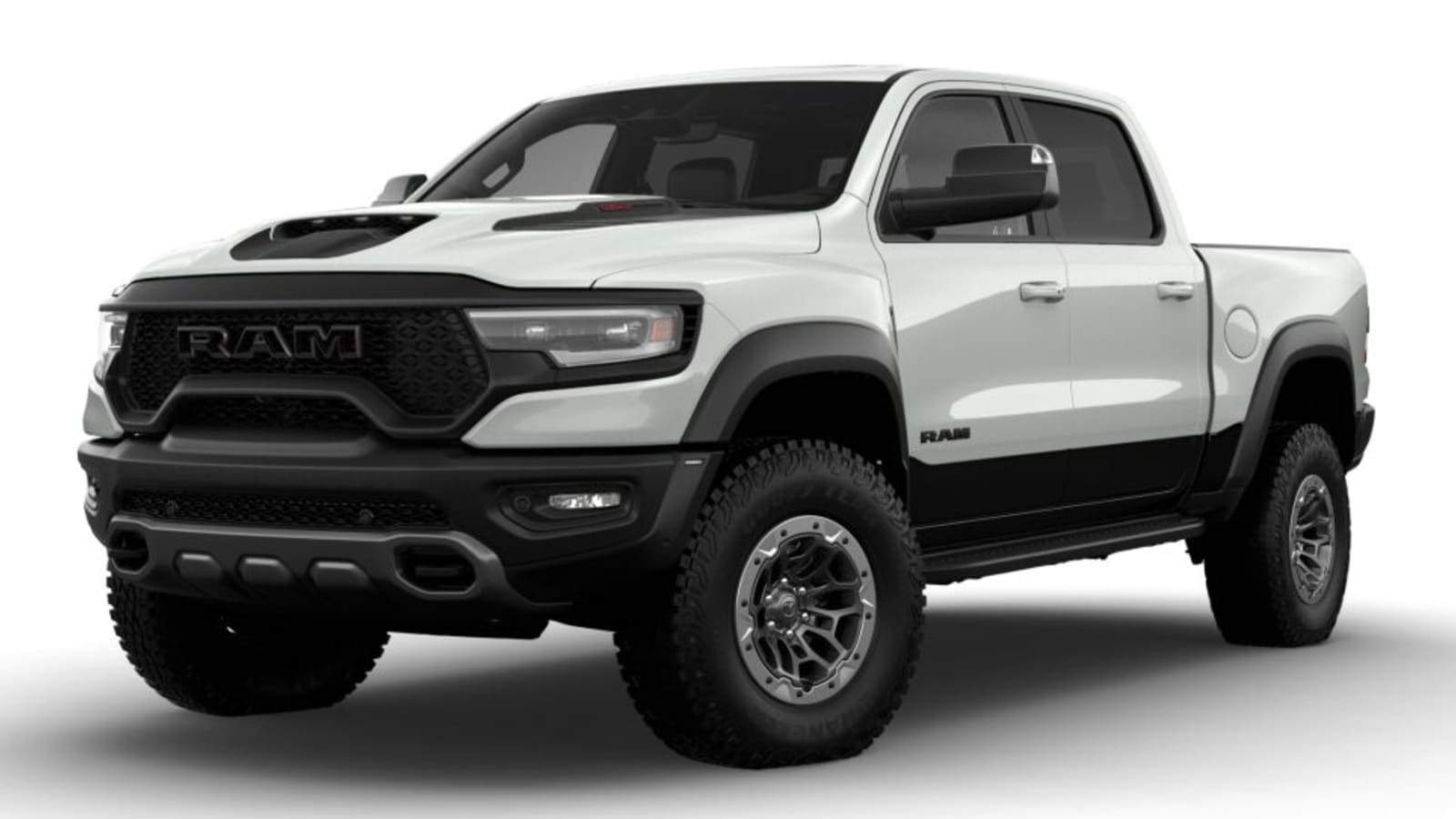 Consumer Editor Jeremy Korzeniewski: Wow. I know others have commented on the price of this thing, but what really stood out to me while I was configuring the Ram TRX is how quickly the already sky-high base price rises with a few options. The issue is that everything you might really want is bundled with a bunch of stuff you couldn’t care less about. It’s not fair to pin this trend solely on Ram, because it’s true of every automaker these days, but adding an $8,000 package right off the bat makes me feel cheated.

Moving on. I sucked it up (it’s virtual money after all) and added the $7,920 Level 2 Equipment Group to my two-tone white and black TRX. That gets me stuff I want like parking sensors, a 360-degree camera, memory for the seats and mirrors, remote keyless entry, remote tailgate release and a trailer brake control. After seeing the price I realized there’s no sense skimping on the TRX, so I added the package with adaptive cruise control, the package with a head-up display and the package with a spray-in bedliner. Power folding mirrors are a good idea on a truck this size, beadlock-capable wheels seem like a solid choice, and running boards will make life easier on my wife. May as well add the dual-pane sunroof while I’m at it, since it already costs as much as a starter home in a decent Midwestern neighborhood. Final tally: $88,715. 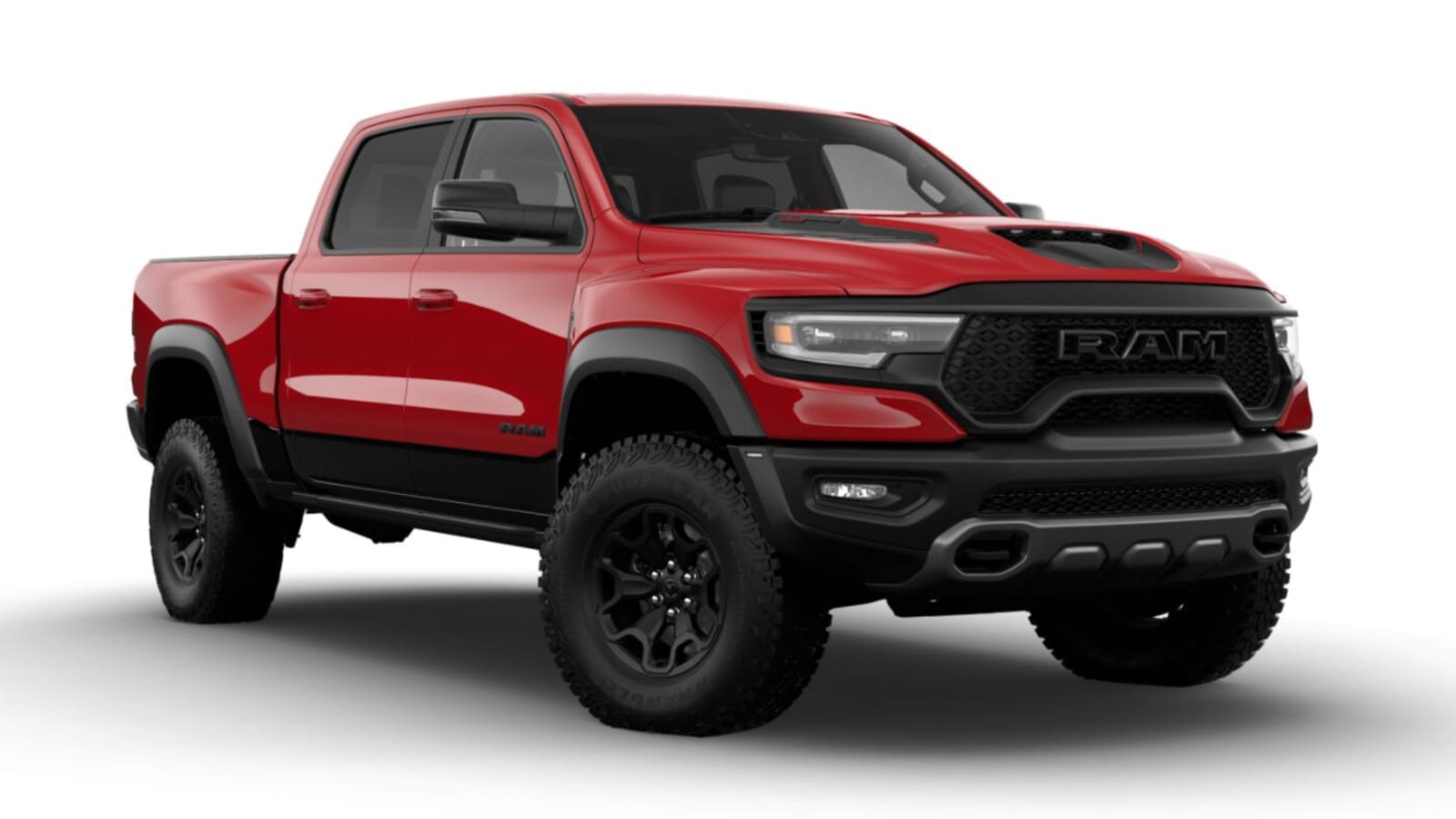 Managing Editor Greg Rasa: A truck that starts at over $71K before adding a single option … pardon me while I tend to this brain bleed. Fortunately, options can be kept to a minimum. I wanted blue paint, but that required buying into the TRX Level 1 ($3,420) or Level 2 ($7,920) equipment groups, so let’s go with Flame Red, which does not have any such strings attached but costs $250 for lower two-tone paint.

Beadlock wheels for $1,895, yes. The configurator won’t allow a selection of both “off-road style running boards” and rock rails, so presumably that means the running boards have rock rails incorporated, so we’ll go with those at $1,195. The Trailer Tow Group has a brake controller, light-check system and trailer tire-pressure sensor, not bad for $395 — but I can back a trailer, so we’ll skip the trailer reverse steering control for $495.  Spray-in bed liner and a bed step come in a package that again requires addition of the Level 1 or 2 groups, so I’ll do the liner aftermarket and step up by myself like a big boy. Because, do I care if the door handles are body color, or there’s leather seating or rear-door accent lighting? No! This is a truck, dammit. Albeit a relatively stripped truck costing $75,425. 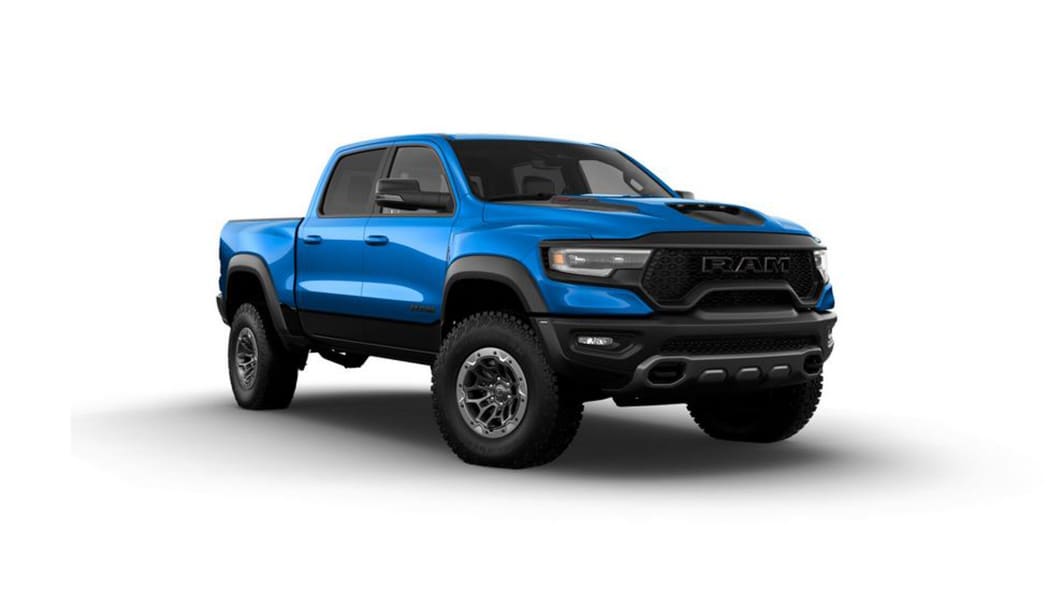 Associate Editor Byron Hurd: I figured my build would be relatively bare bones compared to the rest of the team, but as it turns out, we all seem to be experiencing a bit of sticker shock. Checking in at $79,790 (yes, I like that symmetry too), my configuration turned out to be quite a bit more mid-pack than I’d expected.

I kept it pretty simple. What do I want to be able to do with my TRX? Trail, tow and haul, basically. You know: truck things. So I checked the boxes for the Trailer-Tow ($395) and Bed Utility ($845) Groups, which didn’t do much damage. Then, I made the mistake of looking at the main TRX equipment packages. I do love a heated steering wheel. Do I still love it when attached to the $3,420 TR1 pack? Yeah, as it turns out, I do. Again, this is fake money, but hey. As much as I like a nice HUD, the basic digital cluster readout will do the job to my liking, so I skipped the tech package; adaptive cruise et al can likewise take a seat. The 19-speaker Harman Kardon system, though? Oh, yeah. Don’t mind if I do. 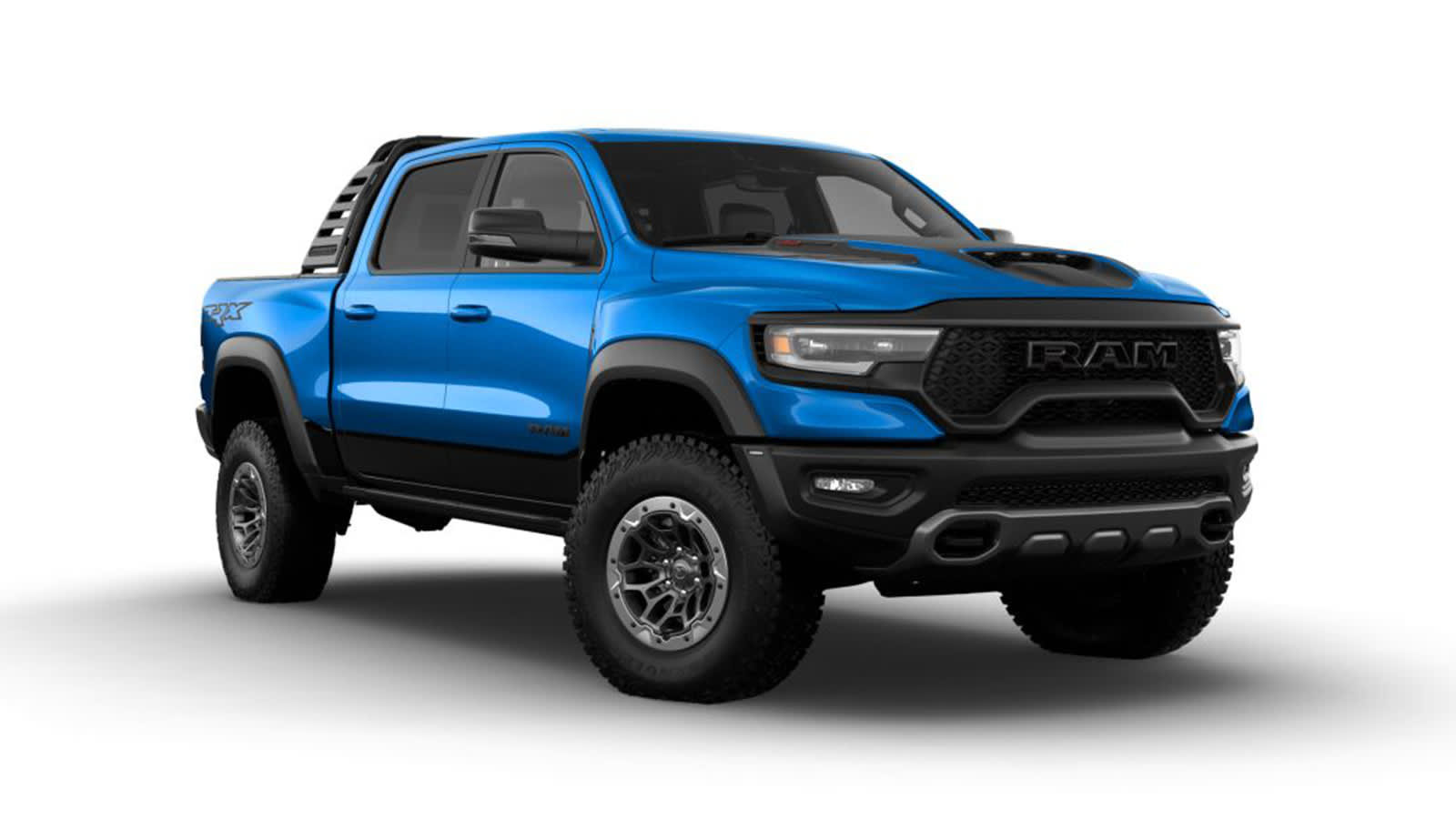 News Editor Joel Stocksdale: Like a lot of my colleagues, I tried to not go crazy with the options and send the price sky high, but wasn’t particularly successful. My build came in at $85,065. I wouldn’t regret my choices, though.

Starting from the outside, the Hydro-Blue paint was destined for me. It’s bright and flashy like this truck. And fitting the theme, I had to get all the TRX fender ($495) and hood ($895) graphics. Some of the exterior upgrades have practical considerations. The $995 rock rails will look nice and help protect the body of this expensive truck when it does go off road. The bead-lock capable wheels ($1,895) will be great when combined with beadlocks for helping keep the tires when low pressure is needed for more traction. And the $1,895 RamBar over the bed is perfect for some sweet off-road lights. As cool as it was, I skipped the bed-mounted spare tire carrier since I would actually use this as a truck from time to time. Related to that was the choice of the $845 Bed Utility Group that added a spray-in bedliner.

As for comfort and convenience features, I was forced into at least the Level 1 Equipment Group, a $3,420 charge. But besides that, I only added the panoramic sunroof, blind-spot monitoring and the surround-view camera (very useful for a wider-version of an already large truck), which I would enjoy using while out in the wilderness. The sunroof added $1,495 to the price. The blind-spot monitoring added $595 and the camera system $495.