Last week, we brought you this list of Marvel superhero toy car tie-ins that don’t make any sense. This week, we were going to do the same for DC, but, well… DC’s toy people may have a bit more tact when it comes to signing random money-grab die-cast car deals, since we couldn’t really find anything too egregious on this side of the superhero fence. A big, practical reason for that is probably because, in DC land, there’s really only one hero who stands head and shoulders above the rest in terms of fan popularity. Sure, people know Superman and Wonder Woman. The Flash is pretty mainstream, and hell, Harley Quinn is making huge waves as the lead character in a movie and TV series. But we all know who the big money maker is for DC, originally known as Detective Comics. That’s right, it’s the world’s greatest detective, the Caped Crusader, the Dark Knight himself, Batman. Although we couldn’t find too many totally arbitrary DC hero/car mashups, what we did find is an absolute boatload of Batmobiles, so strap in for our top 6 die-cast toy Bat-cars driven by old Brucie boy throughout the ages.

There’s no better place to start than at the beginning. Behold the “original” Batmobile in all its glory. This is the first version of the iconic vehicle to ever appear on screen, debuting in the 1966 Batman TV series starring Adam West. “Original” is only in quotes because, if we’re being technical, there were versions of the car in the comic books dating all the way back to 1939, but in a practical sense, this is the one everyone thinks of as the first. The design is based on a modified 1955 Ford Lincoln Futura and we have say, to our eyes, it definitely still holds up. If this design tickles your fancy, you can grab this die-cast model as well as Batman and Robin figurines right here for just $19.99. Holy great deal Batman! 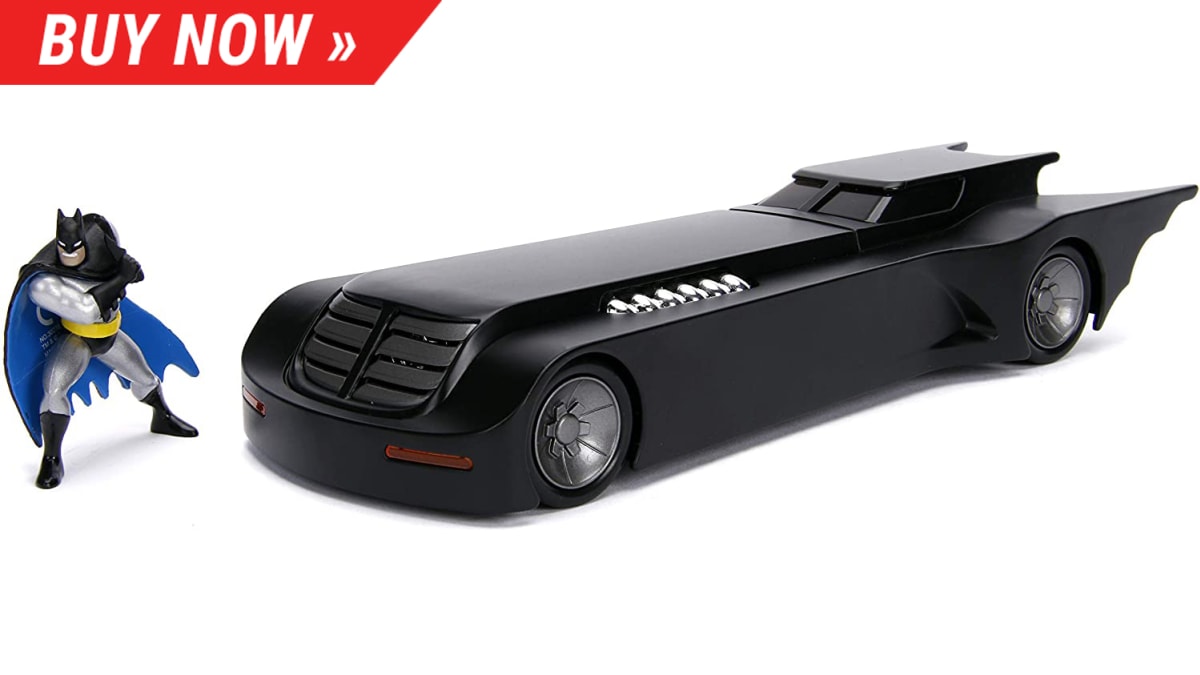 Next up, we have the design from “Batman: The Animated Series.” Many fans might not realize it, but this series is largely responsible for the tone and characters of the modern Batman universe. Many things we take for granted as having always been a part of Batman lore were actually introduced in the ’90s via the show. Before “The Animated Series,” Mr. Freeze was kind of a nobody, B-tier villain, now he’s one of Batman’s most interesting and dangerous rogues. The series also introduced the character of Harley Quinn, even before she made an appearance in the comics. And, perhaps most importantly, the series brought us this super sweet Batmobile. Clearly a huge departure from the last design, this vehicle looks more like a limousine than a 1950’s coupe. According to the “Batman: The Animated Series” wiki page, this version of the Batmobile had superheroic features such as “a turbine jet, grappling hook, ejection seats, on-board navigation and computer with video uplink, oil slick and caltrops.” Not bad, eh? If you’re looking to relive the best cartoon of your childhood you can pick up this model along with the Batman figure for just $25.77 right here. 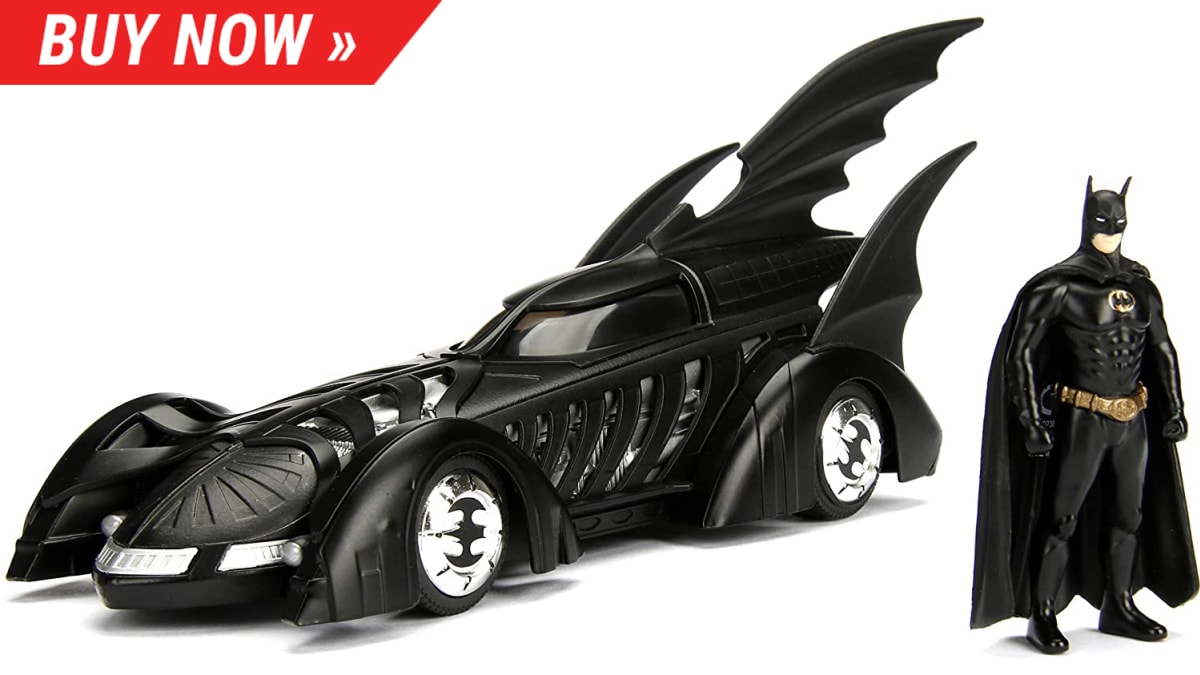 What can we really say about the 1995 cinematic masterpiece that is “Batman Forever”? That it’s the best Batman movie? That it changed cinema forever? Haha, just kidding, this movie is really bad and everyone knows it. If you don’t remember why, let us refresh your memory … bat suit nipples. For all of the hate the movie gets though, there are certainly some fun elements. Jim Carrey as The Riddler is peak Jim Carrey, and Tommy Lee Jones is fun to watch as the Two-Faced Harvey Dent. Not only that, but the Batmobile was pretty cool. This version seems to be something more akin to a drag racer than anything else, and that giant fin on the back can’t be great for clearance while cruising around the tunnels of Gotham, but there’s probably some crazy bat-tech that makes it all okay. Want to pick one of these miniature versions up for your shelf? You can do that right here for $27.06. 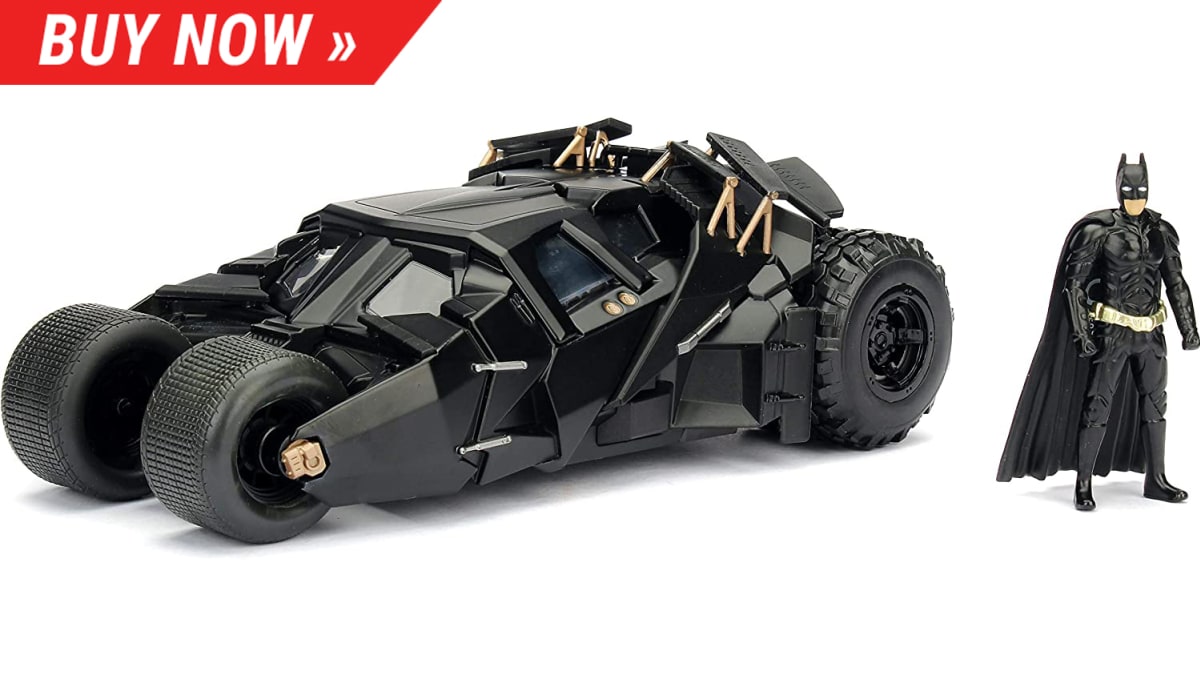 This version of the Batmobile is one of the most popular, thanks to the success of the movie it debuted in. The most controversial thing about this one is that it technically isn’t called a Batmobile, but rather, it’s The Tumbler, which first appeared in “Batman Begins” and reappeared in “The Dark Knight”. It looks more like a tank than any past Batmobile, and that’s because it basically was, with the movie explaining that it was a piece of leftover defense technology from Wayne Enterprises. The latter movie is almost certainly the best Batman movie to date, despite taking some creative leaps with the car. The movie also gave us, arguably, the most definitive on-screen version of The Joker thanks to a brilliant performance from Heath Ledger (although Joaquin Phoenix’s recent foray into the depths of Joker’s mind is surely high on the list for many people as well). We’re not entirely sure why Batman thought it was necessary to have a military-grade vehicle in this version of the mythos to fight an anarchist in clown makeup, but hey, whatever the reasoning, it certainly resulted in a cool new look for the iconic vehicle. You can pick up a die-cast version of it right here. 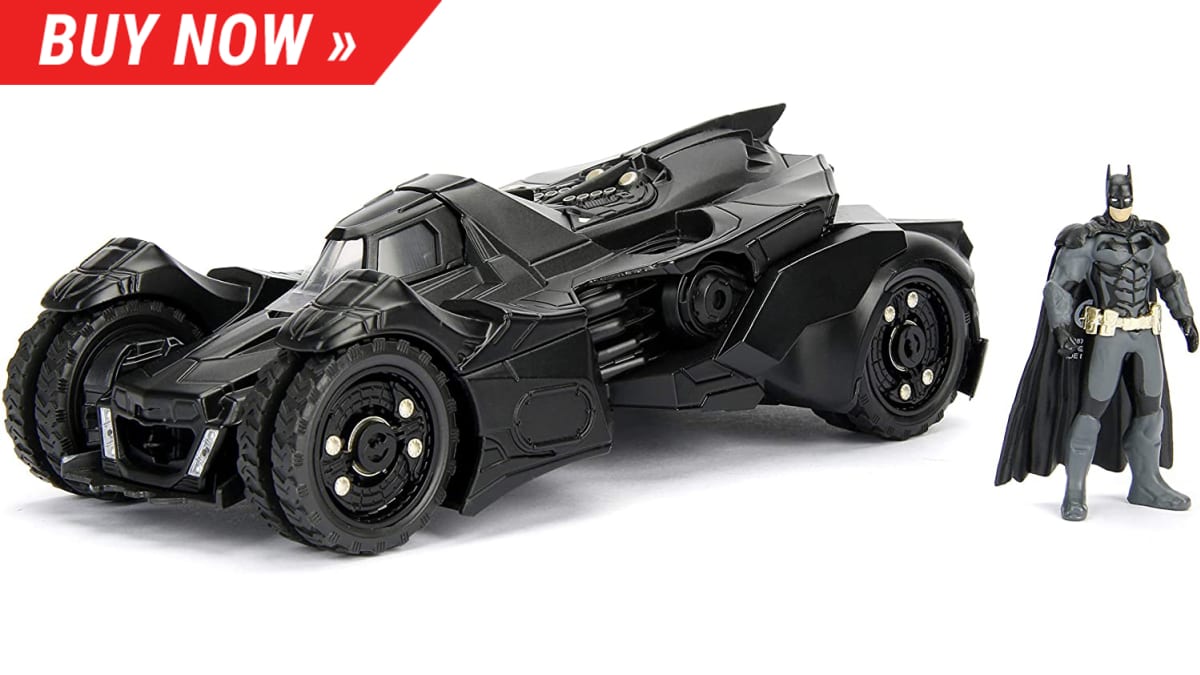 We hate to say it, but since The Tumbler, the new Batmobiles have pretty much been all downhill from there. This version of the vehicle comes from the video game “Batman: Arkham Knight” where it was a controversial addition. Design-wise, it’s basically just a poor man’s version of the Tumbler; It’s fine, there’s nothing overtly offensive about it. But if you played the video game it debuted in, you’ll know that there are some bad memories associated with this vehicle. The game’s Batmobile sequences were some of the most undercooked and least fun in the entire Arkham series. The plot was also hurt by the fact that any serious Batman fan could pretty obviously deduce who the villainous Arkham Knight was his first appearance in a cutscene, totally eliminating any mystery or suspense. That said though, we’re sure there is someone out there who has tapped this as their favorite Batman game, and that’s great! Who are we to judge. Like what you like and don’t let anyone shame you for it. If that person is you, you can pick up this Batmobile right here for 27% off. 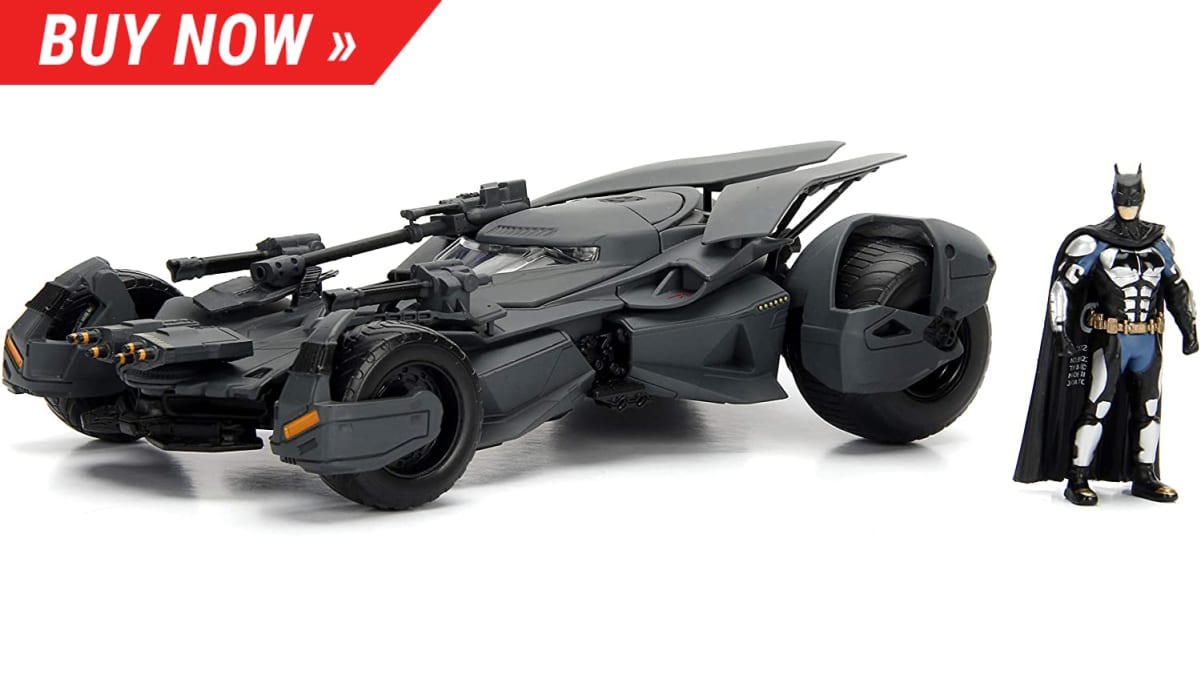 We wish we could end this list with a bang rather than a whimper, but unfortunately the most recent mainstream version of the Batmobile is from the 2017 movie “Justice League”. This movie is so historically bad that it’s set to be the first movie ever to get an actual redo and re-release via HBO’s new streaming service HBO Max. To be completely fair, the production of this movie was a total disaster. The director Zach Snyder had to leave the production halfway through filming due to unforeseen circumstances, and he was replaced by Joss Whedon, director of “The Avengers“. That movie series has been critically acclaimed, but the Marvel Cinematic Universe has a drastically different tone from the dark and broody DC group. The end result was, well, it was definitely technically a movie we guess. That’s about the nicest thing we can say. Some people may use that as a justification for why it didn’t meet the original director’s expectations, but for our money, this was doomed to be a dud from the jump, and we’re not necessarily holding out hope for the “Snyder Cut” on HBO Max to be all that much better. One of the many headscratch-inducing choices made in the movie was to include, not one, not two, but three large chain guns on the front of the Batmobile. If you know anything about Batman, you know he’s pretty anti-gun and anti-murder. It’s kind of his thing. This version of the character apparently doesn’t share those views, though. Perhaps we shouldn’t be so surprised, since Superman, also pretty anti-murder, killed his foe in Snyder’s “Man of Steel”. At the very least, it definitely makes for a unique version of the car. If murdery Batman floats your boat, you can pick up this die-cast car and an inexplicably shiny Batman figure right here for just $24.99.