A tenet of good writing says you can’t modify a superlative. “Very best” gilds the lily, and “one of the best” is a hedge. Best is all you need say. That’s the spirit of the phrase “the Rolls-Royce of …,” which gets applied to any kind of thing, say a particularly nice vacuum cleaner, and it is immediately understood. “Rolls-Royce” equals “best” or “finest.” It’s enshrined in the English language.

So it’s a rare event when the pinnacle of automotive excellence, and the expression of supremacy in everything wrought by human hands, heaves to in one’s driveway. The Rolls in this case was the 2020 Roll-Royce Cullinan, the most expensive SUV in the world.

Automotive writers’ neighbors probably think we’re drug dealers when they see everything from Alfa to 370Z come and go, though even Walter White stepped up only as far as a Chrysler. A $394,275 (as optioned) Rolls-Royce sends a different signal — that the queen has come for dinner.

This Cullinan arrived in lustrous Jubilee Silver (a big improvement over the purple one our contributor Jason Harper drove a few months ago). The car appeared to be carved from a silver ingot. Our first-drive review back in 2018 called the three-ton Cullinan a monolith, and that’s spot-on. It looks imposing and not to be trifled with, like a British warship. And in fact this car was built to a nautical theme, with a two-tone interior of Charles Blue / Navy Blue. A hand-painted coachline of Charles Blue traced its gunwales.

Cullinan even sounds a bit like a British warship (they have the best names). But its namesake is the 3,100-karat Cullinan diamond, the largest ever discovered, chunks of which are part of the Crown Jewels. The car is an enduring symbol of British Empire, though with a lot of German parts. 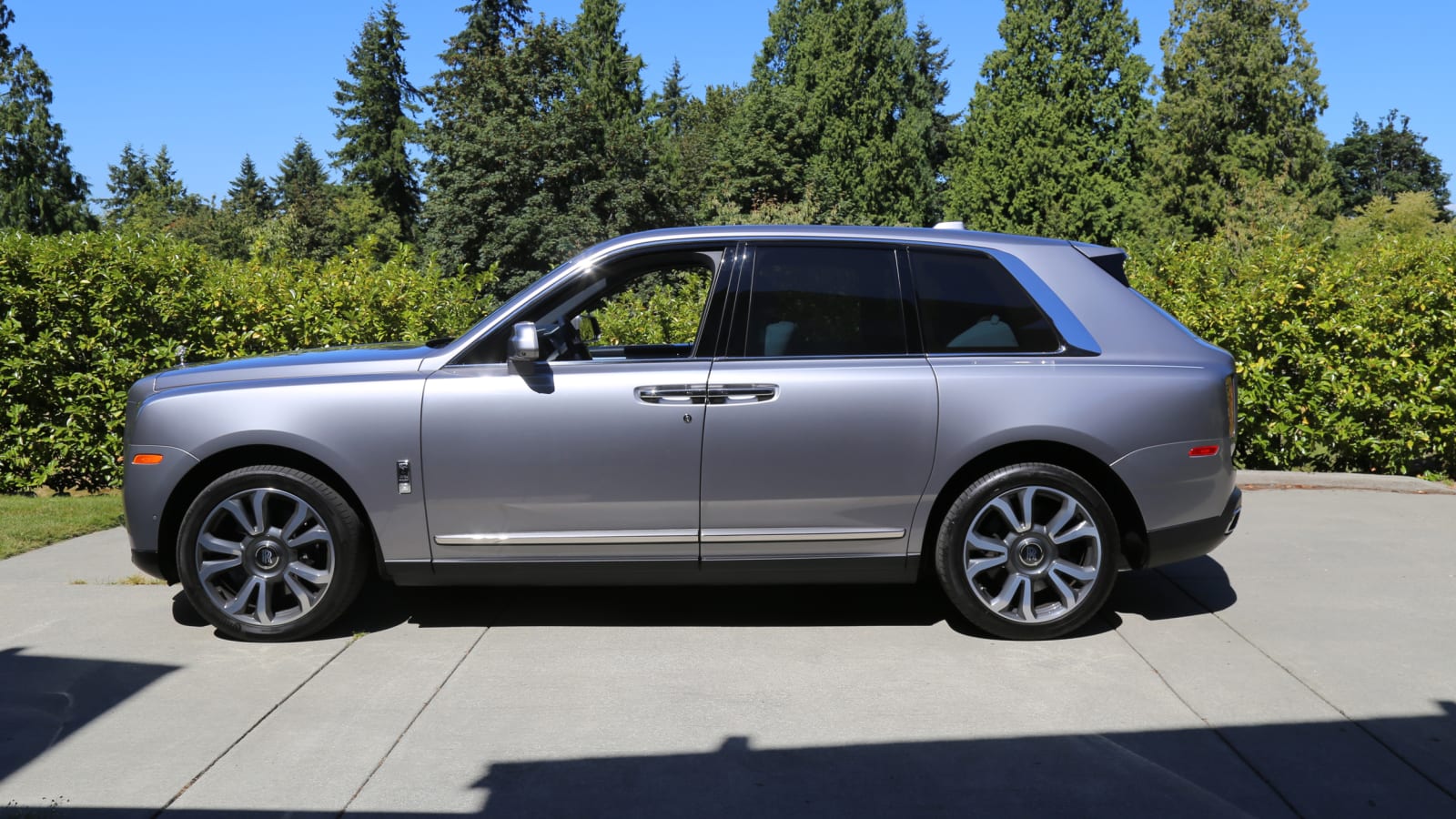 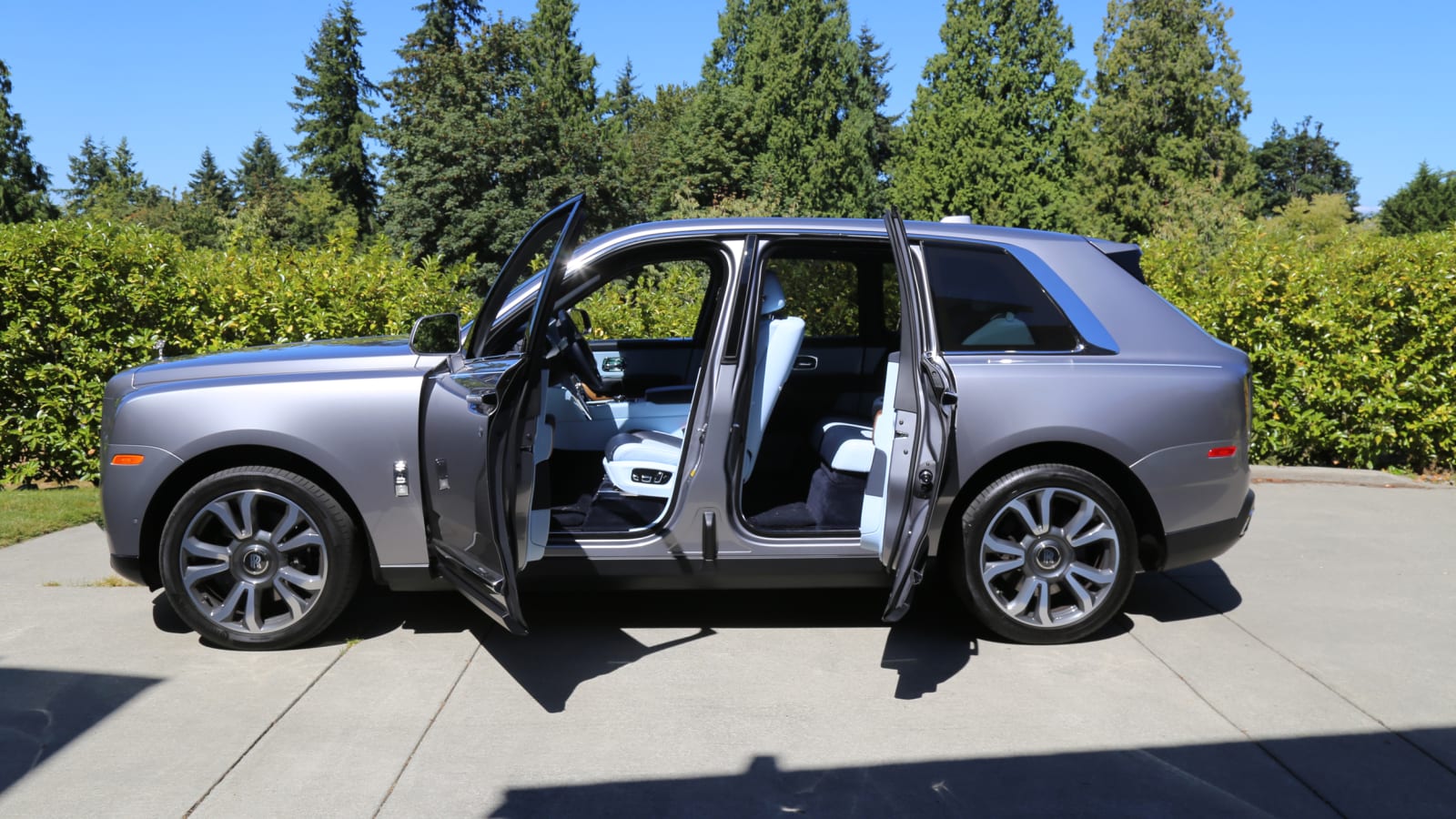 What can one say?

We drive a lot of expensive cars at Autoblog, but it’s a bit hard to understand why there even is such a thing as a Rolls-Royce press vehicle. What sort of information could a critic impart? Do you expect to hear it wasn’t nice? Well, it was. Was the V12 not smooth? Like English cream. Was it not comfortable? Its cabin was expansive and its seats accommodating, and its ride was every bit the “magic carpet” Rolls promises, with sensors alerting the air suspension of upcoming unpleasantries in the road surface. And like a magic carpet, the system settles the car back down to earth for a gentle landing when you’ve arrived. Yet the self-righting wheel centers make it appear as if you’d never left.

And who would benefit from criticisms, if there were any? Few reading this have the means, but those who do would likely choose something more anonymous for real-world use, such as a top-trim Range Rover. Even a Bentley Bentayga would be less expensive, if only slightly less attention-getting. In Seattle, a town with its share of billionaires, I’ve seen a Cullinan on the road only once. Bill Gates, to name just one, is a Porsche man. A Rolls-Royce, though made for motoring, is more of a status symbol for pro athletes or rock stars. It’s collected, and for what it is, not what it does. That said, the company sold 5,152 cars in 2019, up 25%, largely because of the Cullinan.

Perhaps a Rolls-Royce press car exists simply because Rolls is proud of its life’s work and is willing to appease the voyeur in all of us. This $400,000 car wasn’t even that heavily optioned, what with no tea service, no cargo-area picnic seating for watching the polo ponies, and no reclining right rear throne. Yet it’s in the same class of object as a cathedral — timeless and inspiring awe. Admire it or dismiss it, that’s up to you. As with any other work of art. 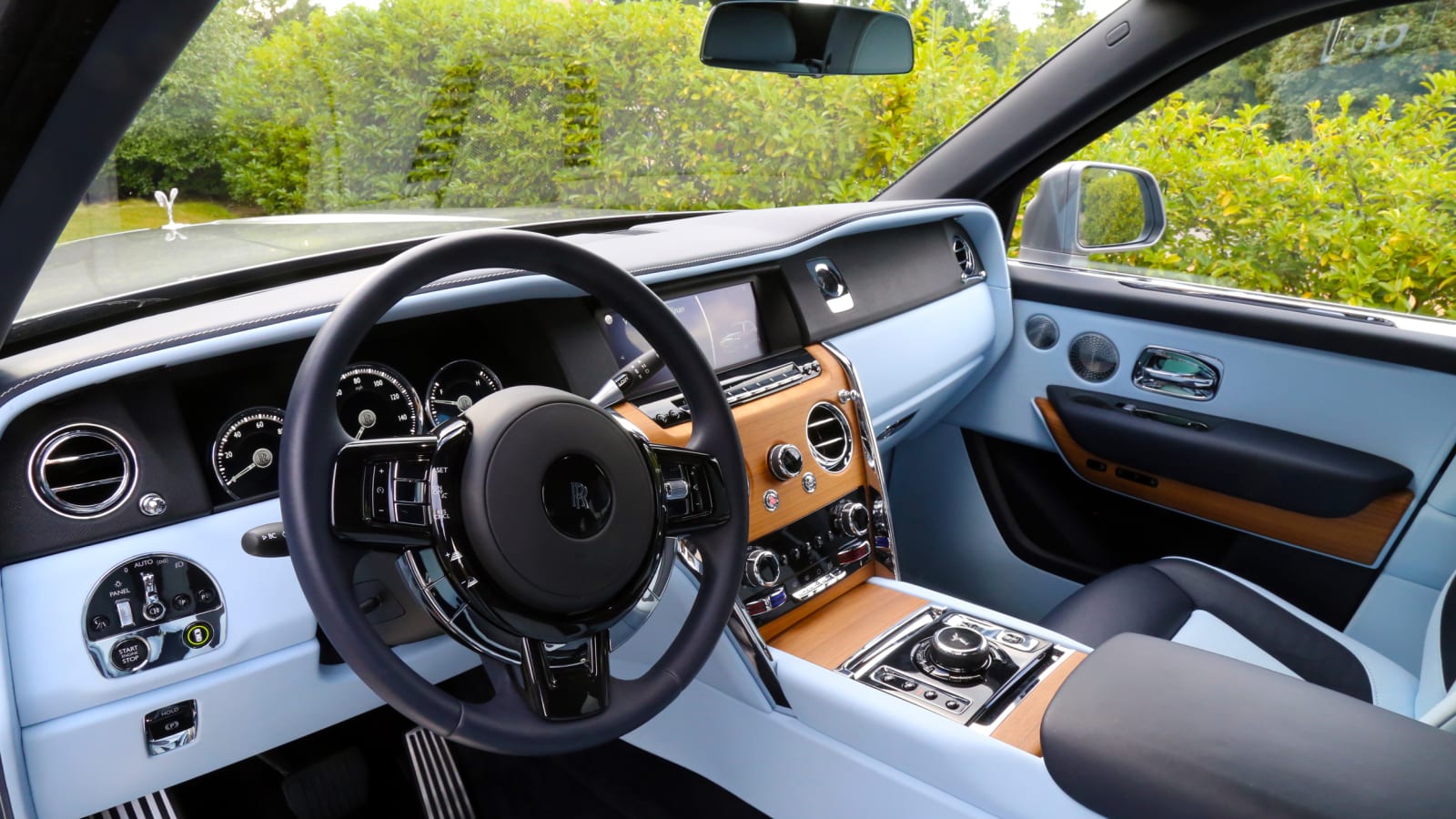 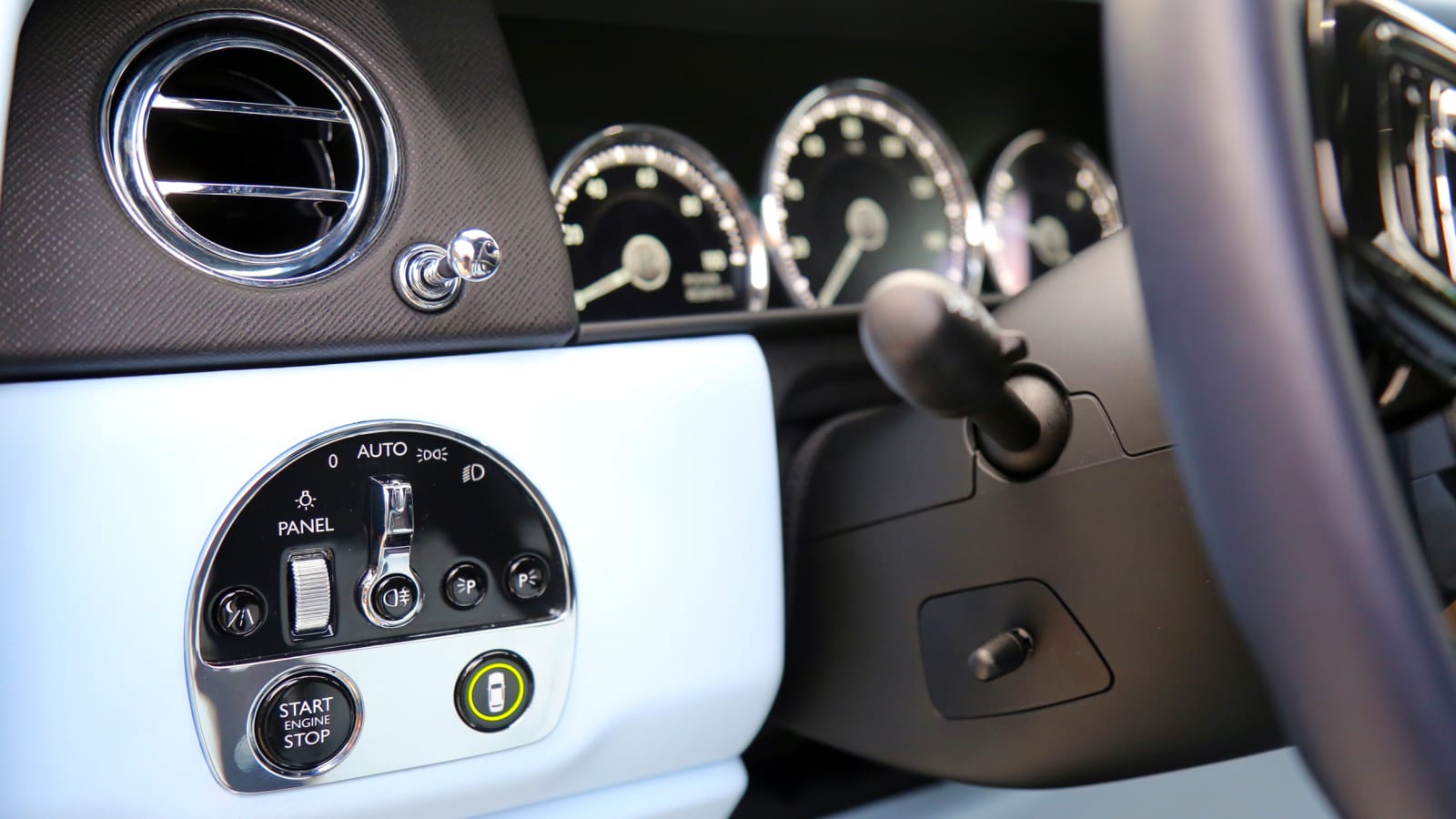 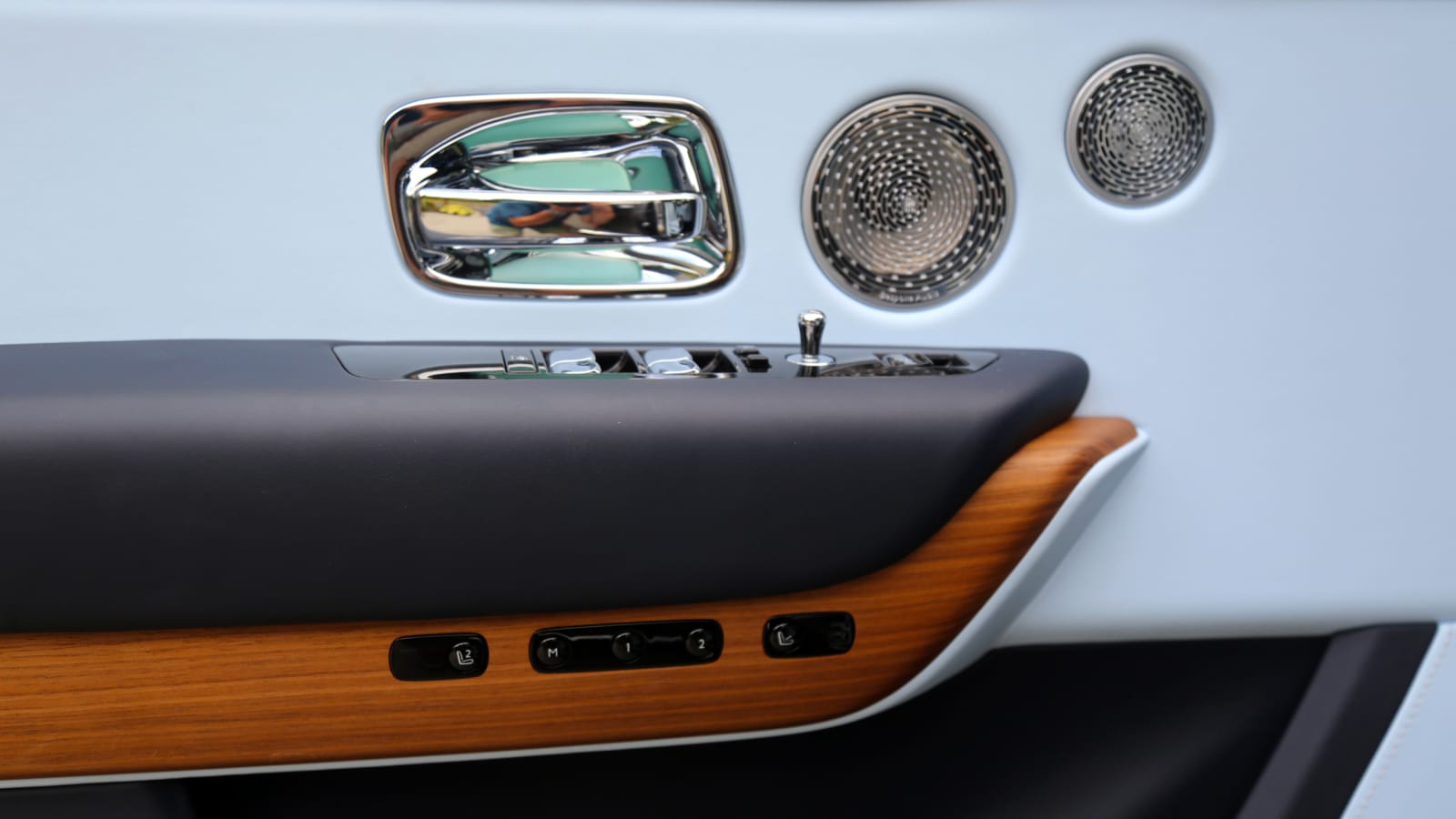 You might never have driven a Rolls. You also might not listen to classical music. But if you do, you will. It just fits. The Rolls-Royce Bespoke Audio system comprises 18 speakers and 1,300 watts, and what could be better on a sunny afternoon drive than the arch-romanticism of Rachmaninoff or the enigmas of England’s own Elgar. The sound experience was awesome. But when my passengers boarded, they took one look at the interior and thought Yacht Rock Radio would be funny. Rupert Holmes never sounded better, which is not to say he sounded good. BMW Blog shared the playlist it says Rolls uses to calibrate the sound system, though I discovered the list too late to try it for myself.

The center stack is a jewel box of gleaming brightwork set in open-pore walnut from the forests of Circassia (that’s a land near the Black Sea, don’t you know). Every button and dial feels substantial. The air-vent pushrod controls throughout the cabin are weighty and silky smooth in their operation. The engine start button and lighting controls are wrapped in a crescent that evokes an old-time aircraft magneto switch or wooden speedboat dash. Heating, cooling, massaging, the perforated leather seats will do all of that. Leather covers everything — the door cards, the lower footwell walls, the dash, even the portion of the floor mat where your heel rests.

Lest you wrinkle your dinner jacket leaning out for those long coach doors, hidden switches under the lip of the dashboard will close them electronically for you.

The back seating is spacious, of course, and the seat backs contain fold-down wooden desks, with infotainment screens that mirror virtually all the functions of the main center console display. You can control the music, vehicle settings, or lay in a course for your driver from one of the passenger navigation panels. Anything can be done from the back seat, short of actually driving the car. Those panels are touchscreen, while the front screen also has a control knob. No matter where you’re sitting, the infotainment reacts quickly and bears a family resemblance to BMW systems.

The 6.75-liter twin-turbocharged V12 offers an effortless 571 horsepower and 627 pound-feet of torque. Those would be big numbers in a less substantial car but are proportionate given the Cullinan’s weight. The driver’s display features Rolls’ power reserve meter, replacing a tachometer as a more elegant way to express what the engine is up to, by counting backwards from 100% the amount of, well, power held in reserve. It’s similar to an eco-driving gauge in an EV. On the zippiest onramp or steepest hill, the meter never dropped much below 70%.

The Cullinan has the trappings and capabilities of an SUV, in case one must ford a brook on one’s way to the hunt. Controls on the center console include an off-road button that raises the air suspension another 40 mm from its standard running height, stiffens the damping, attenuates the throttle and modulates wheel braking to increase traction. There are also buttons for raising and lowering the ride manually, and a hill descent control.

Shifting the eight-speed, satellite-assisted transmission is performed with a Mercedes-style stalk on the steering column, and it never felt more incongruous to control a machine of this size and power with such an insubstantial instrument. And as in any modern Mercedes, an attempt to shift the transmission sometimes leads you to squirt washer fluid by mistake, usually just when you’re positioning the car to take a photo.

The Cullinan’s a big, posh car, and no surprise, it drives like one. One does not throw it into curves or floor the gas, that’s unseemly. A gentleman in a Rolls drives the speed limit, turns up the stereo, and tries not to spill his passengers’ Champagne. The car floats along in sublime isolation from the road beneath you and from the world that road’s built upon. Wait, what, you actually want to take it off-road? We did just that in our aforementioned first drive. 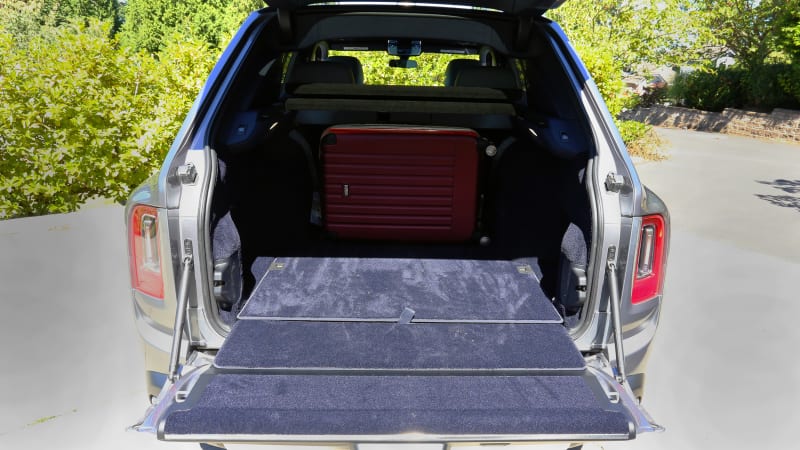 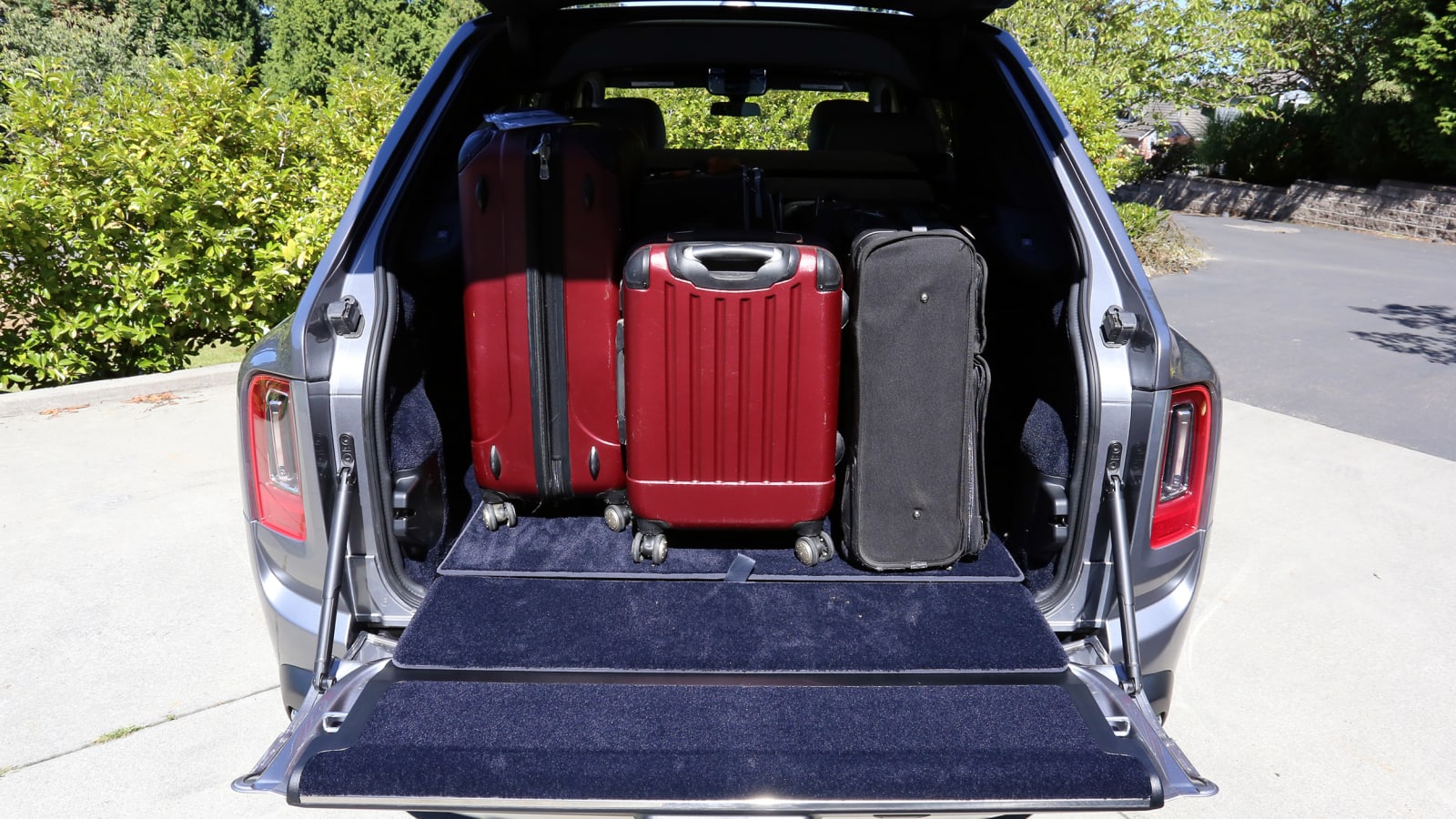 Because it’s an SUV, a quick luggage test was in order. The cargo hold is just under 20 cubic feet, in a fat “T” shape that’s narrow forward and wider at the tailgate. It’s a restrictive footprint, but the the cargo space is tall. The test utilized six suitcases, three that would need to be checked at the airport (29x19x11 inches, 26x17x10, 25x16x10) and three small enough to use as carryons (24x14x10, 23x14x11, 22x14x9). Dimensions include the suitcases’ wheels.

A cargo cover is smartly designed to fold up in sections, like a map, into a stack right behind the seats. Once that’s out of the way, simply lay your biggest suitcase on edge in the narrow space between the rear wheels, and stand the rest upright. The back seats are so tall, even the biggest suitcase won’t block the rear view. All six pieces fit, and small spaces remained at each of the rear corners where something soft-sided could be stowed.

Finally, as I prepared to turn the Cullinan back over to the good people of Rolls-Royce, I discovered that its luxurious, inch-thick lambswool floor mats, which feel divine underfoot, are devilishly hard to clean. I went over them repeatedly with a shop vac, but small bits of grass or dirt burrowed their way deep down. That’s a rich man’s problem right there, but it can be delegated to the chauffeur, and perhaps he’ll have the Rolls-Royce of vacuum cleaners.