Volkswagen hasn’t yet formally revealed the ID.4, but it’s already bragging about beginning series production of the electric crossover in its Zwickau, Germany, plant. The best images we have of the ID.4 are above in the trippy blue camouflage. It’s the crossover version of the ID.3, and it’s built on the same MEB platform that VW will use with numerous electric cars in the future.

The ID.4 will be built in Germany, China and at the Chattanooga, Tenn., plant for the U.S. Unfortunately, VW says it doesn’t plan to start production in the U.S. until 2022. Cars bound for the U.S. will initially be shipped here from Germany, but that will change once the Chattanooga plant is ready to rock. VW plans on completing its Zwickau electric vehicle transformation later this year. At that point, that plant will only be producing EVs. 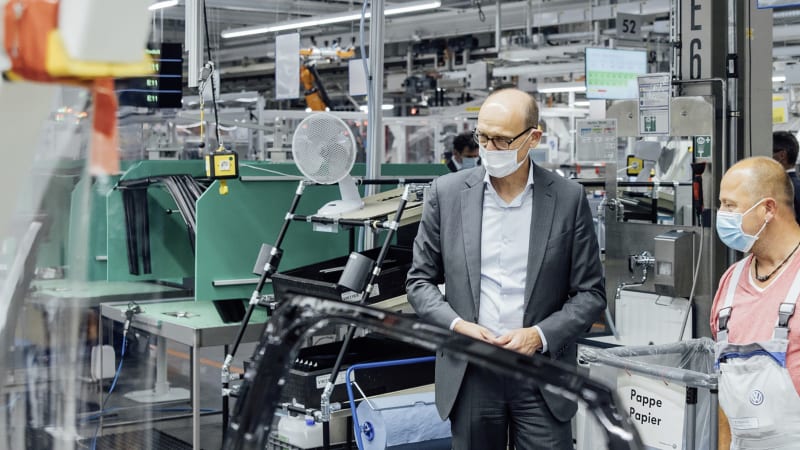 As for the car itself, Volkswagen is still claiming a driving range of up 310 miles on the optimistic WLTP cycle. EPA estimated range is still unavailable. VW also says it’ll be offered in rear-wheel-drive form initially with all-wheel-drive versions coming at a later date. Operation of the vehicle’s interior interfaces will be done via touchscreen for the most part, and VW says the cockpit is “clearly structured and consistently digitized.”

Volkswagen will surely be aiming to avoid the issues it experienced with the rollout of the ID.3, which caused delays and slowed its launch. The official reveal of the ID.4 is scheduled to take place at the end of September, but we’ll likely have to wait on specific specs and details for the car that eventually makes its way here.