We often mention how crossovers are displacing sedans and hatchbacks as the daily driving vehicle of choice for the majority of Americans. The BMW lineup exemplifies this shift perhaps better than any other premium automaker. The brand’s entry point is currently the X1, and it moves up the ladder to include the X2, X3, X4, X5, X6 and X7. All of those even-numbered Xs are sportier, driver-focused versions of the previous odd-numbered models, which means the X2 is quite similar to the X1 that we’re focusing on today.

But that’s not all. BMW also owns the Mini brand, and that company’s dealerships are equally chock-full of crossovers. And, lo and behold, platform-sharing efforts mean that the Mini Countryman is also built atop the same basic guts as the BMW X1 and X2. All three are front-wheel-drive-based CUVs powered by 2.0-liter four-cylinder engines, each offers all-wheel drive, and each offers a degree of utility via their cargo hatches over a correspondingly sized sedan’s trunk. They all share the exact same 105.1-inch wheelbase, too.

But there are key differences worth pointing out between these three similar crossovers. We won’t go over every nook and cranny of the three siblings — that’s what our individual Buying Guides are for, which you’re encouraged to click just below — but a recent week spent with an X1 xDrive28i was the perfect spark for us to share a few thoughts.

None of the three of these little utility vehicles is trying to look burly or particularly rugged, though the Countryman (below left in blue) is arguably the gnarliest of the bunch with a square-jawed, squat look that more closely resembles a fashionable bulldog than any other vehicle in Mini’s lineup. What you won’t see on the X1, X2 or Countryman are any off-road-style accoutrements — there’s nary an even semi-functional skidplate to be seen across the range. There’s some plastic cladding that seems like it’s there to protect the underside of the X1 and Countryman, but not the more street-oriented X2 (below right in gold), though to be fair, even extending the term “soft-roader” to any of these three is being a bit generous. 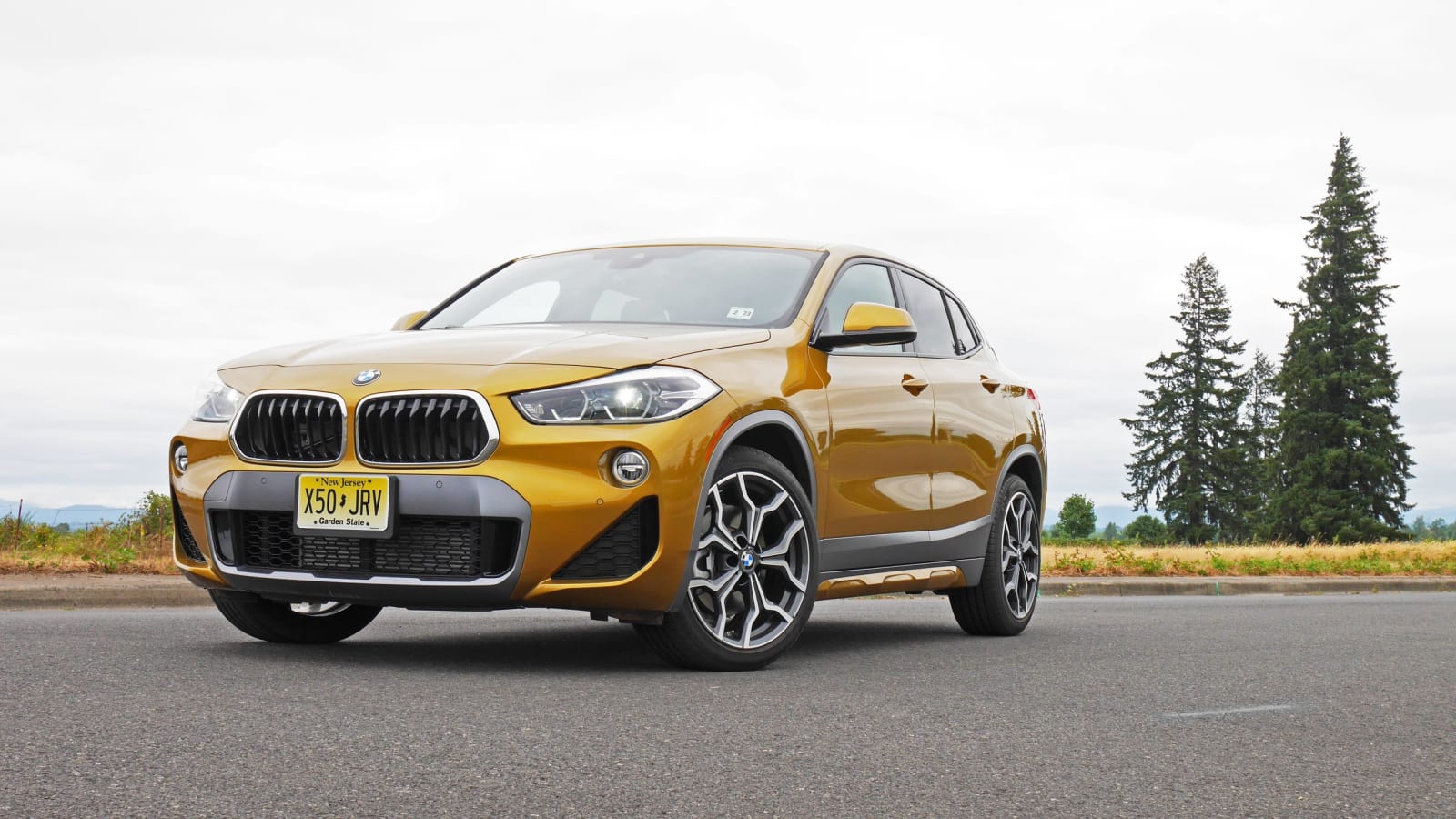 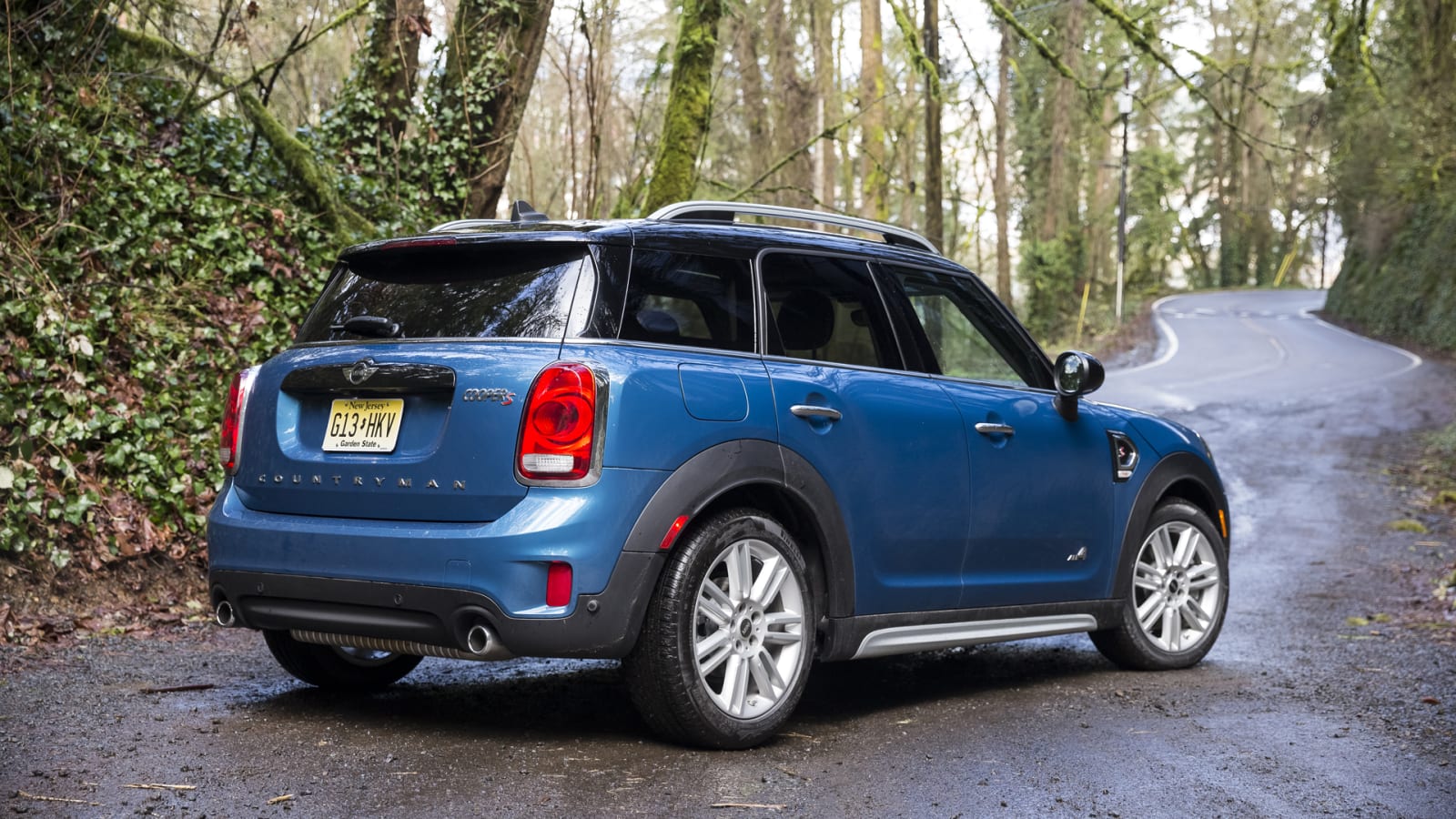 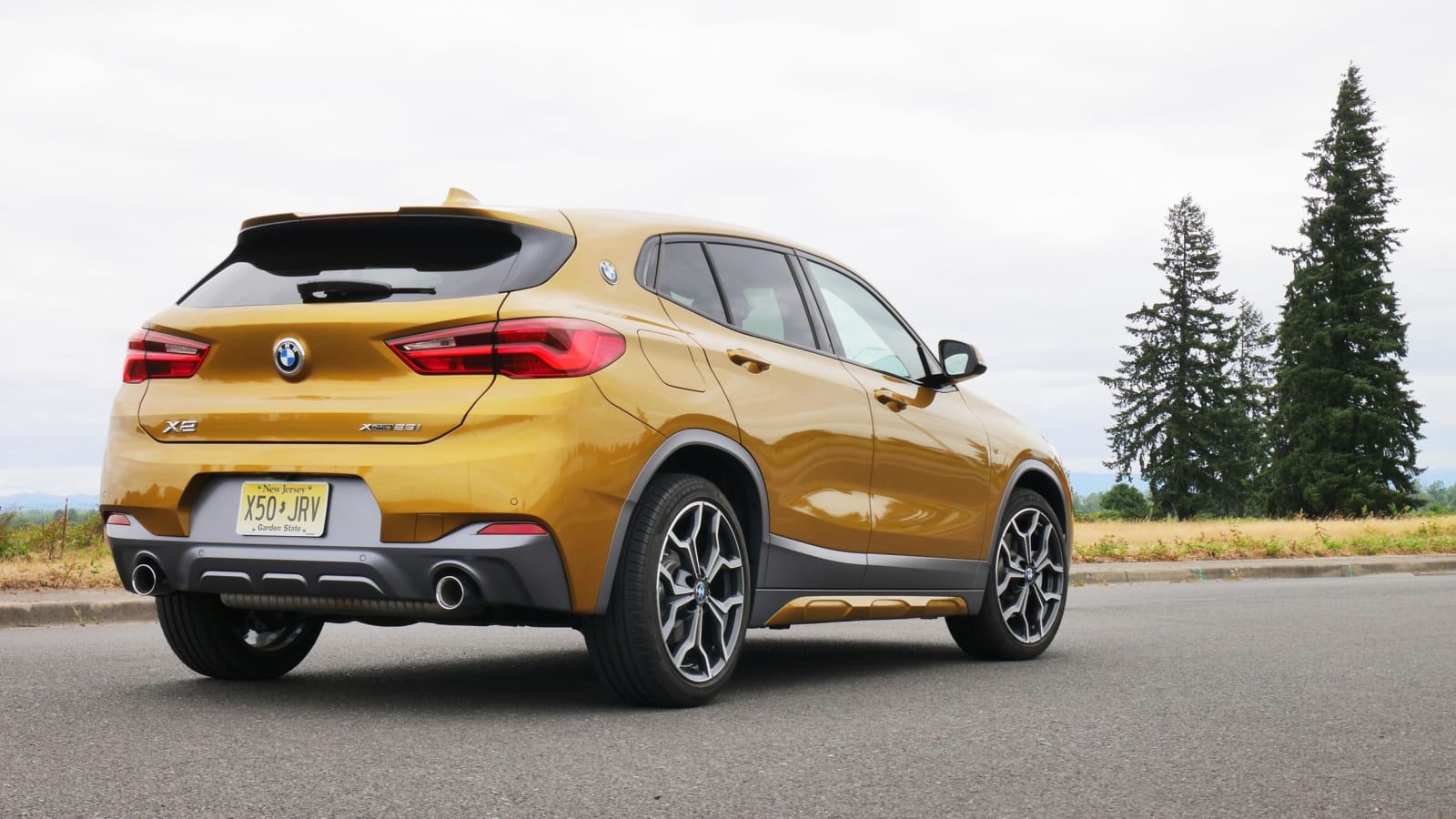 We think the X2’s low-slung, hatchback-esque shape is pretty attractive, while the X1’s major visual landmark is its slightly oversized — though not comically so, as is the case with some other BMW models — chrome grille. Otherwise, there isn’t much that draws the eye to the X1. That includes models equipped with the M Sport package like our test vehicle, which can be seen in detail in our high-res image gallery at the top of this story. In place of the black plastic cladding, the M Sport gets different 18-inch wheels, a body-color “aerodynamic kit” and a redesigned fascia. It’s not so much an improvement over the X1’s basic XLine kit; it’s just different. The X2, on the other hand, greatly benefits from its optional M Sport package with its Shadowline exterior trim that adds up to an aggressive looking machine. We’ll call styling a draw between the diet SUV Countryman and the grown-up hot-hatch look of the X2.

The X1 and X2 boast nearly identical cabins, though the trimmings are different. Our X1 had the Black Perforated leather interior with blue highlights that we think looks and feels excellent. The X2 (below left in red) offers sportier color options inside and out, though buyers with less expressive taste can opt for basic light and dark leather upholstery. The Countryman (below right in tan), as we’ve come to expect from the Mini brand, features an interior that’s full of character and charm while being a bit of an ergonomic nightmare with buttons and knobs all around and a big round cluster right at the center of the dash. It’s great that Mini offers so much room for expression with interior colors, textures and options galore, but we wish the end result was more harmonious and easier to live with. 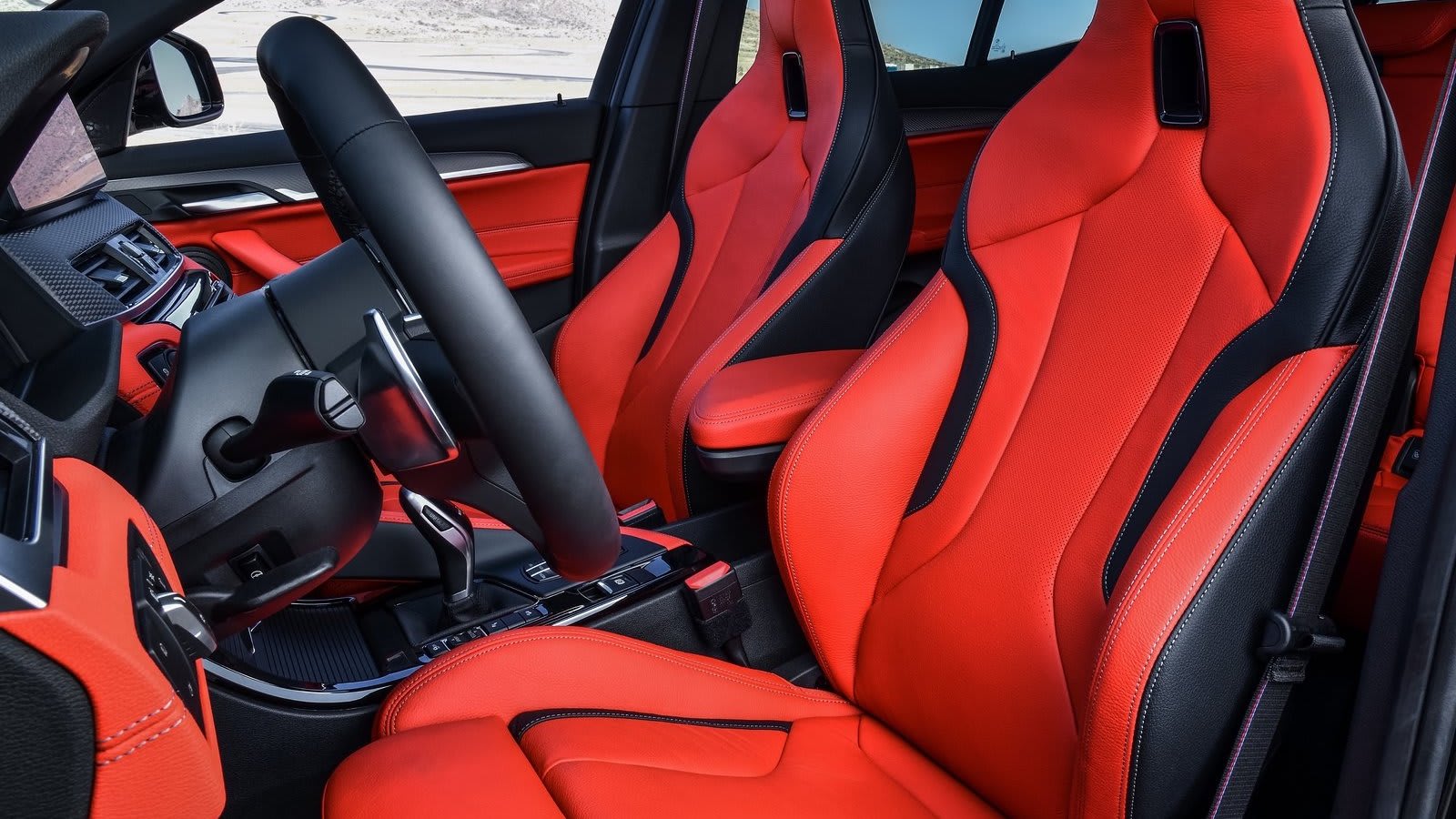 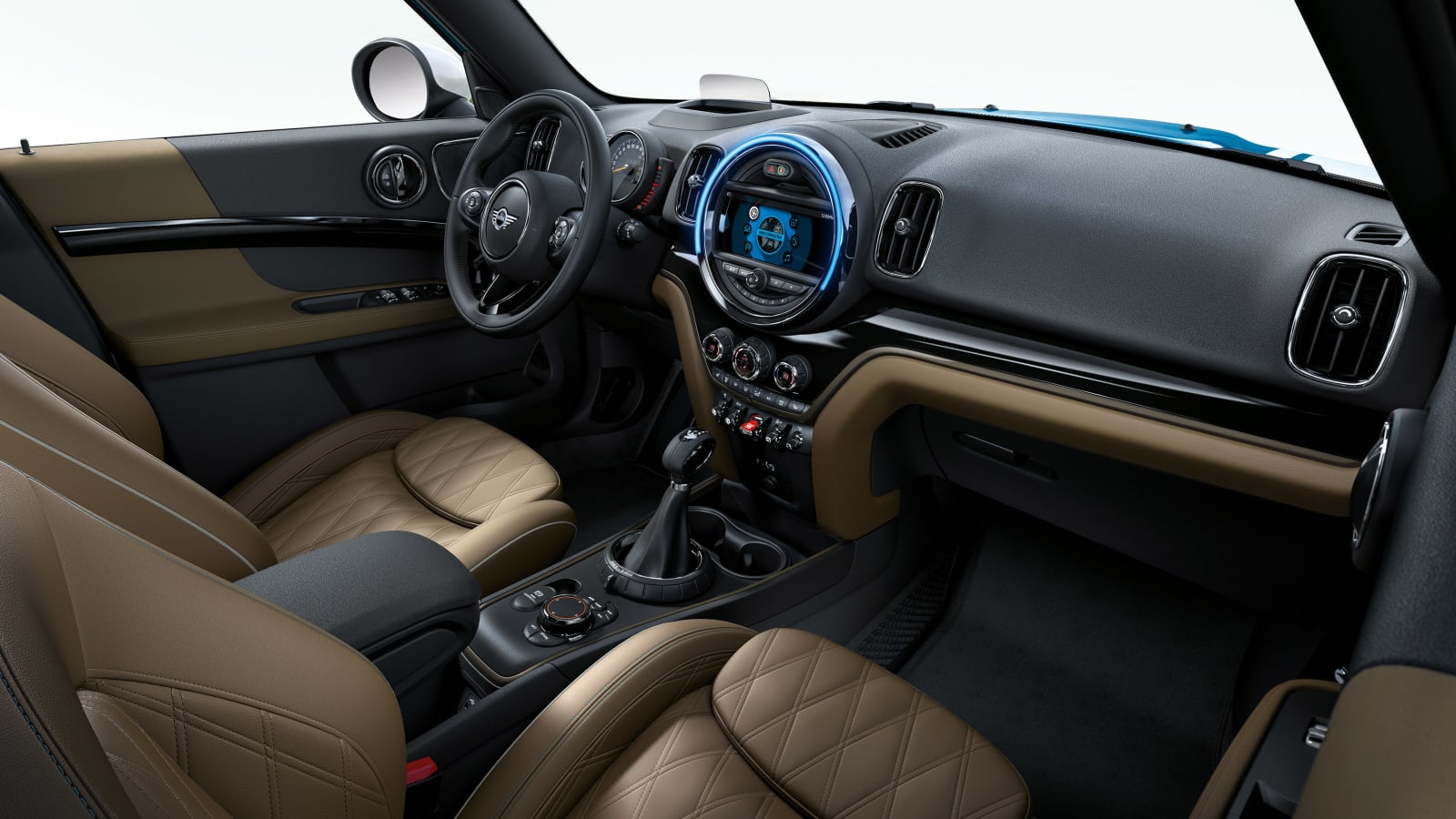 That leads us to utility.

While none of these vehicles is particularly large, the X1 offers the most interior space and boasts the best cargo capacity. The Mini isn’t far behind on passenger space, but falls short in overall storage room, and the X2’s pinched roofline cuts down on headroom and makes entry into the back seat a challenge.

How do they drive?

Quite well. Again, you can read more about their individual dynamics in our Buying Guides, but fortunately all three feel like premium vehicles. Still, they each have their own flavor. The X1 is pretty mellow, and its dynamics may be a letdown for BMW traditionalists. It’s smooth, quiet and comfortable, and while it has a Sport mode, the X1 never feels overtly sporty. If anything, it can be feel a bit wallowy when cornering hard. The only engine available in the X1 is a 2.0-liter turbocharged four with 228 horsepower and 258 pound-feet of torque. It performs well enough, as does its eight-speed automatic transmission, though there are times where the engine feels like it’s caught flat-footed and needs to build a bit more boost.

If you’re looking for something a bit sportier, the X2 may be more to your liking. The more rakish twin has the same base engine but is also offered in M35i guise. Serving up 302 hp and 332 lb-ft., this hotter variant is not offered on the more sedate X1. The X2 M35i drives more like a hot hatch than a crossover, making it the recommended version for enthusiasts.

The Mini Countryman is offered in three versions. The base Cooper gets a 1.5-liter turbocharged three-cylinder with 134 hp and 162 lb-ft. It’s fine for commuting and a reasonable choice for someone looking to minimize their fuel bills. The Cooper S gains a 2.0-liter turbo with 189 hp and 207 lb-ft — it’s basically a slightly detuned version of the engine in the X1 and delivers adequate power. And then there’s the John Cooper Works, which ups the ante with 301 hp and 331 lb-ft. That’s the hot rod of the Countryman line, and it accelerates just about as hard as the similar engine offered in the aforementioned X2 M35i. There’s also a plug-in hybrid version of the Countryman, which pairs the 1.5-liter engine with electric motors for a total of 221 hp and 284 lb-ft. Unlike many eco-minded offerings, the hybridized Countryman is pretty fun to drive.

What do they cost?

So where does this leave potential buyers? The X1 is the Goldilocks of BMW’s small crossover triplets. It’s the most useful, carries an air of luxury and refinement, and wears the premium BMW badge between its kidney grilles. A young buyer, or even an older buyer who prefers more youthful cars, should check out the Countryman Cooper S, which combines reasonable utility, lots of character and a sense of sporty fun. The X2 is for buyers looking to make a statement, though it’s hard to recommend after considering its high sticker price and form-over-function mission statement.

We think most buyers will be happiest in the X1, and we’d recommend they consider the M Sport package for its improved styling inside and out. But we wouldn’t fault anyone for choosing to splurge on the powerful JCW-equipped Countryman, either.