With Buick seeing sales success in our crossover-crazed world, it’s no wonder the company is adding to its crossover lineup with the 2020 Buick Encore GX. It sits just above the existing Encore, and it offers more space and new turbocharged engines for just a bit more money. In fact, as it starts at just $900 more than the existing Encore and offers more power, space and fuel economy, it’s unquestionably the Encore version to get when heading to your Buick dealer. But compared with other crossovers, the Buick’s only real advantage is in its quietness, refined powertrain and upmarket badge. Otherwise it’s a fine but unexceptional crossover.

Our test car was an Encore GX with the 1.3-liter engine and the CVT, and on paper, it’s the engine to go with. It’s more power with less fuel use. And while it’s not the most powerful car in its segment, its torque is accessible throughout the rev band, so it never feels slow. Buick has done an excellent job keeping the engine quiet, either through powertrain refinement or through extensive sound deadening. You’ll never hear more than a faint growl from under the hood.

The CVT is absolutely the transmission to choose, too. It’s amazingly smooth and unobtrusive. The revs are always kept low and there’s just enough variance in them that it doesn’t feel like a rubber band. It responds fast to your right foot, too, so you aren’t waiting for more rpm when needing to accelerate faster. This is in stark contrast to the experience Road Test Editor Zac Palmer had in the nine-speed-equipped Chevy Trailblazer, which has the same powertrain options as the Encore GX. He found the transmission to be a bit jerky and sluggish. So unless you’re on a budget or need all-wheel-drive, go for the 1.3-liter and CVT combination.

Building on the well-isolated powertrain is a tremendously quiet cabin. There’s almost no tire, wind or road noise. You might hear a very light thump going over some bumps, but otherwise it’s a silent sanctuary, which is impressive for a crossover available starting around $25,000. And that quietness should be the case on even the $25,000 model, since the noise cancellation feature is standard for all Encore GX models.

The rest of the driving experience is less impressive. The ride is as soft as you would expect from a Buick. It certainly removes the harshness from pavement pockmarks, but it lacks composure. There’s a fair bit of up and down rocking movement after going over big humps and bumps. Unsurprisingly, handling isn’t a highlight with a good bit of body roll and not a particularly eager chassis. The steering is also middle of the road with good weight but no feel. 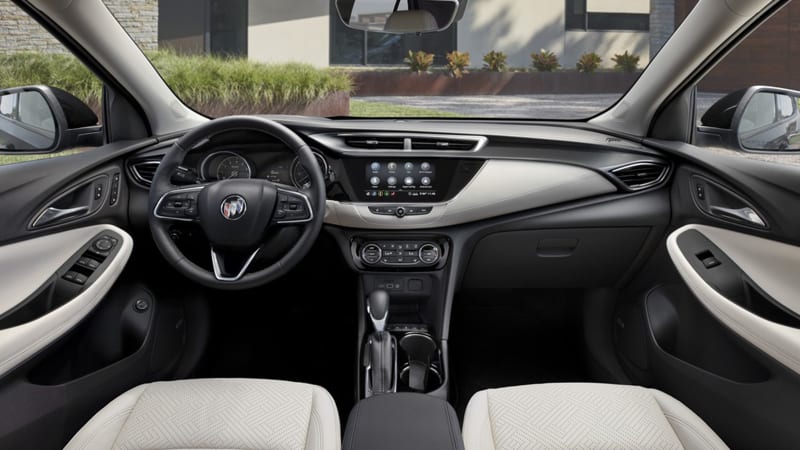 The inside of the Encore GX is underwhelming, too. The materials aren’t bad, using a number of soft touch plastics and some upholstered dash trim, but the plastic pieces are large molded pieces that look cheaper than they are. The overall design looks like someone said they wanted a curvy interior, and just made every part curved without much thought to how they all supported one another. Choosing an entirely black interior makes it all especially drab, so we would recommend choosing an interior with a contrasting color that helps bring some visual interest to the cabin. On the plus side, controls are fairly simple and easy to use. Dedicated climate controls are lower in the center stack, and the standard 8-inch infotainment screen is bright, clear and very responsive. On the two highest trims, the Encore GX can even be outfitted with a crisp and clear heads-up display.

Actually sitting in the Encore GX is a mixed bag. There’s plenty of space in most directions for the front passengers. The seating position is nice and high like crossover buyers seem to enjoy. But the front seats are very flat with short and narrow bases that could get tiresome on long drives. The rear seats are also flat, but fortunately have a comfortable recline to the seatback. Legroom for your 5-foot-11-inch author behind himself was adequate, but knee room was a bit tight. The payoff for a slightly tight rear seat is an enormous amount of cargo space. Behind the rear seats is room for 25.3 cubic feet of stuff. Folding the rear seats expands that to 50.2 cubic feet.

The real issue the Buick Encore GX has is that its sole competitor in the budget, upscale small crossover segment is a better overall package. That car is the Mazda CX-30. It starts at a much lower price tag of around $22,000. It has a much more stylish interior with nicer materials and switchgear. It’s available with just about as many technology and safety features. And it packs more power and far superior handling in its sleek body. In fact, it might be available with way more power in the near future.

Still, if you’re looking for a more premium little crossover, the Encore GX is at least worth a look. Compared to the Mazda, it has quite a bit more interior and cargo capacity, and it has a softer ride and quieter interior, which some may prefer. And compared with other sub-$30,000 It’s more refined than just about anything else for the money.