Every new Mercedes-Benz S-Class has a vast array of new features that tend to blow us away. Whether it’s Mercedes inventing something totally new, or just improving upon an older technology, the S-Class consistently sets the bar for every other big luxury car in the world.

If you want a broader overview of what the new S-Class is like, check out our full reveal post that covers the car from bumper to bumper. Here, we’re going to take a closer look at the new gadgets and gizmos that owners will find hidden within their new Mercedes.

As cars get more digital, they tend to remind us of our smartphones. Mercedes is diving right into this with some serious biometrics. It’s all in an effort to personalize the driving experience. You can program up to seven different profiles (for seven different drivers) into the car. Mercedes estimates that these profiles can save up to “around 800” parameters for any specific driver. Radio presets, ambient lighting, seat settings and driver assistance settings are but a few examples of things that can be saved to a profile.

To access these profiles, the S-Class allows you to use a few different methods. Biometrics installed in the car include a facial recognition system, fingerprint reader and voice recognition. The facial recognition reminds us of Subaru’s driver monitoring system that automatically reads a person’s face upon sitting down, then applies their personal settings to the car. Mercedes’ does the same, but you’ll need to option the 3-D instrument cluster to get the facial recognition. For the fingerprint reader, Mercedes has placed the sensor just under the 12.8-inch central touchscreen. Upon recognizing the print, all your settings will load up. In case you want something a little more old fashioned, Mercedes will let you set a PIN to access your profile, too.

There’s more to talk about here than you might imagine. Mercedes has used exotic lighting on several of its recent concept cars as a luxury and safety feature. The new S-Class is the same both inside and outside the vehicle. We’ll start on the inside, because that’s the most intriguing part for us Americans (more on that in a second).

Ambient lighting in Mercedes has long been a step ahead of other applications, and the S-Class takes it one step further. It now features what Mercedes is calling “active ambient lighting.” It’s “active,” because it coordinates with the driver assistance systems to reinforce warnings and alerts. For example, if you put your turn signal on with somebody in your blind spot, the lights will quickly pulsate red in a warning to stop what you’re doing. The lights will also change color as you adjust the climate control, pulsing blue for cooler temperatures and red for warmer adjustments. Mercedes says the lights themselves are much improved from the previous ones, featuring more and brighter lights than before. Of course, you can always dim the lights to black if you don’t want to be bothered at night. 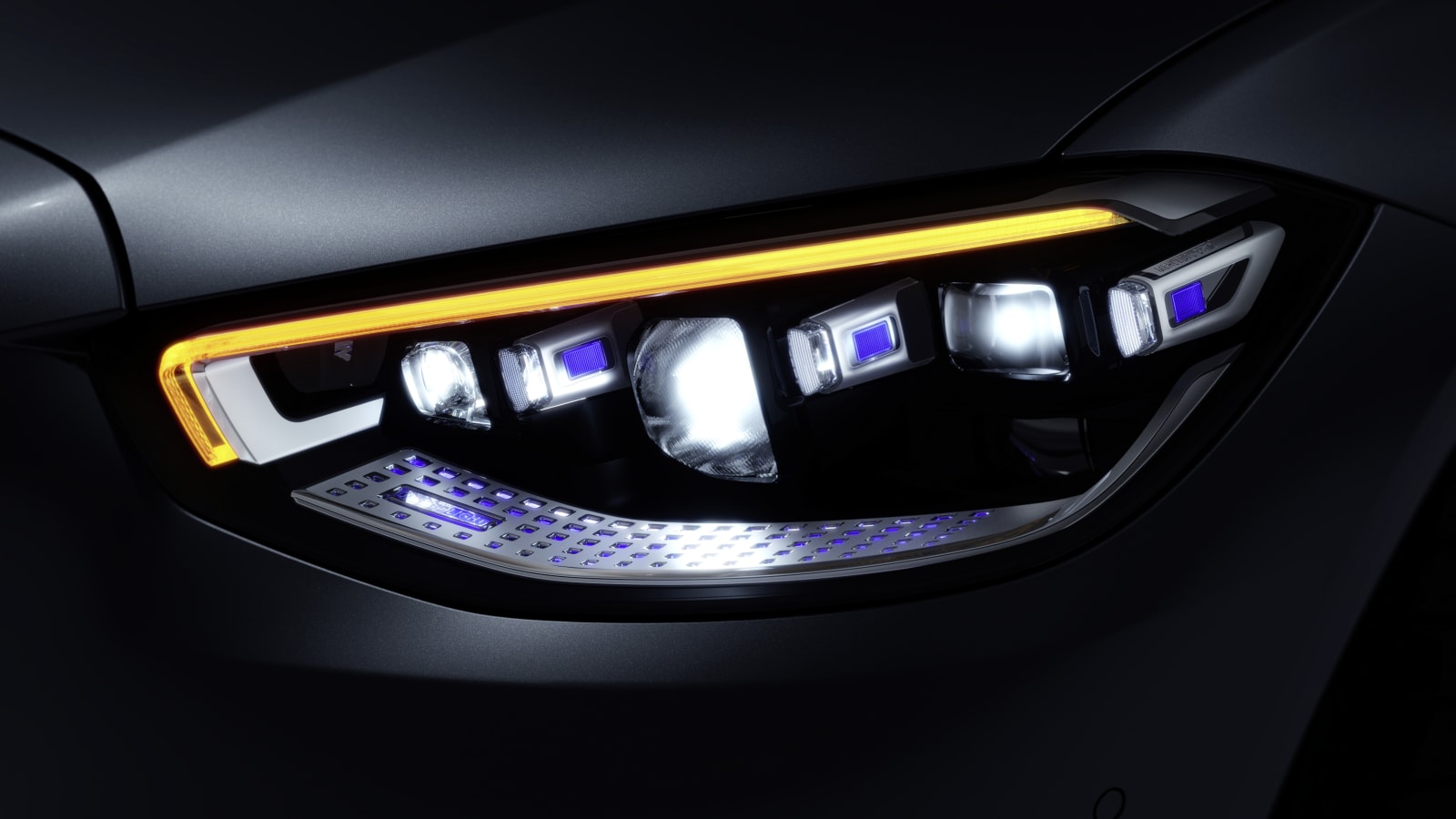 Moving to the outside, we see that Mercedes has made the optional “Multibeam LED” lights standard for the S-Class in this generation. However, the rest of the world (not the U.S.) has an even more impressive lighting option called “Digital Light” (pictured). Within the Digital Light modules are three extremely powerful LEDs whose light is refracted and then directed by 1.3 million micro-mirrors. These micro-mirrors only occupy the same space as a human thumbnail, so yes, micro is the correct descriptor here. The mirrors are also capable of dividing the light into as many pixels as there are mirrors, making 2.6 million pixels of light for each vehicle. With that extreme number of pixels, Mercedes is able to project the most precise distribution of light yet. The tech is similar to that of a video projector, and it uses a graphic processor to generate the continuous video stream to the mirrors. 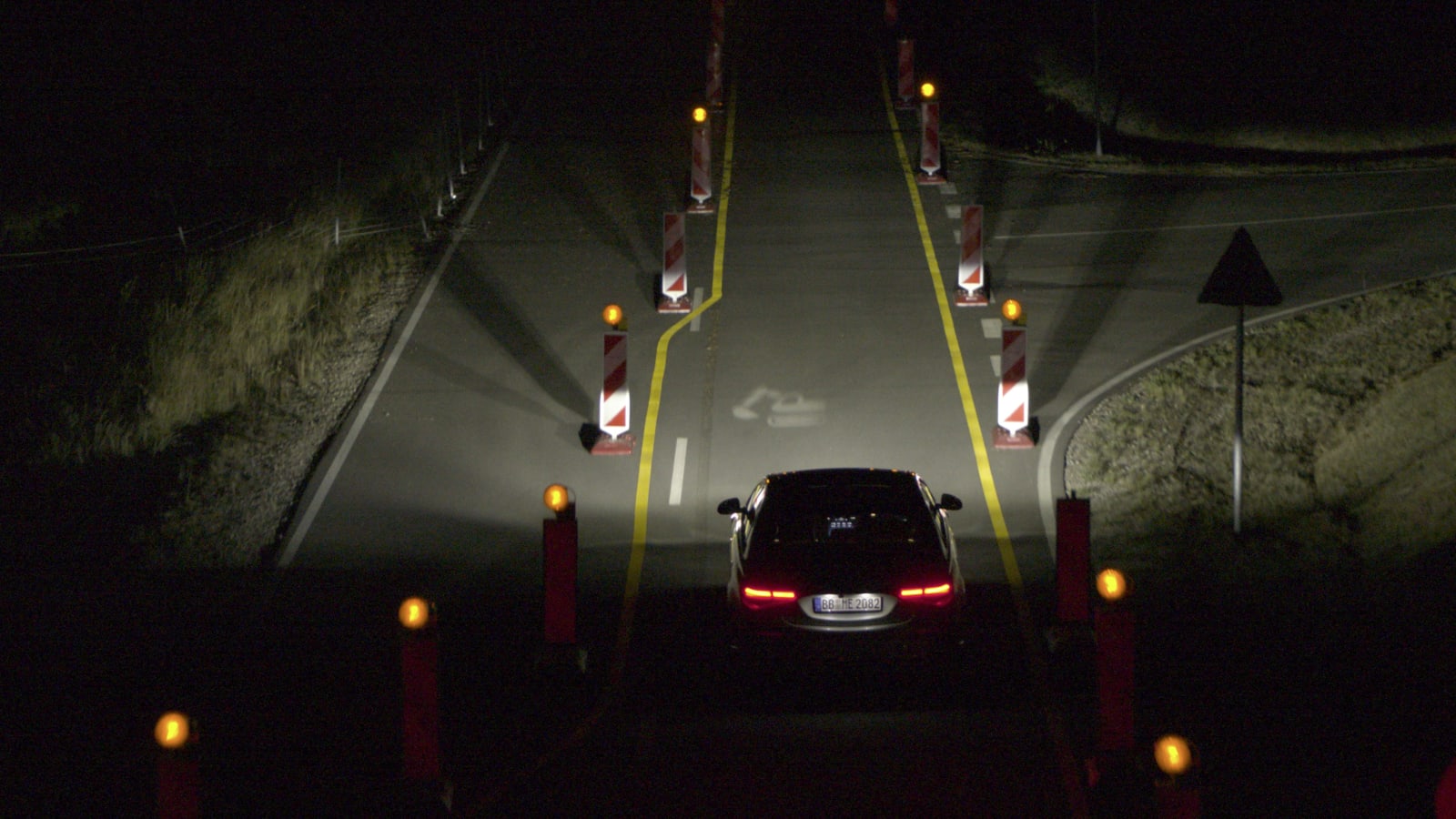 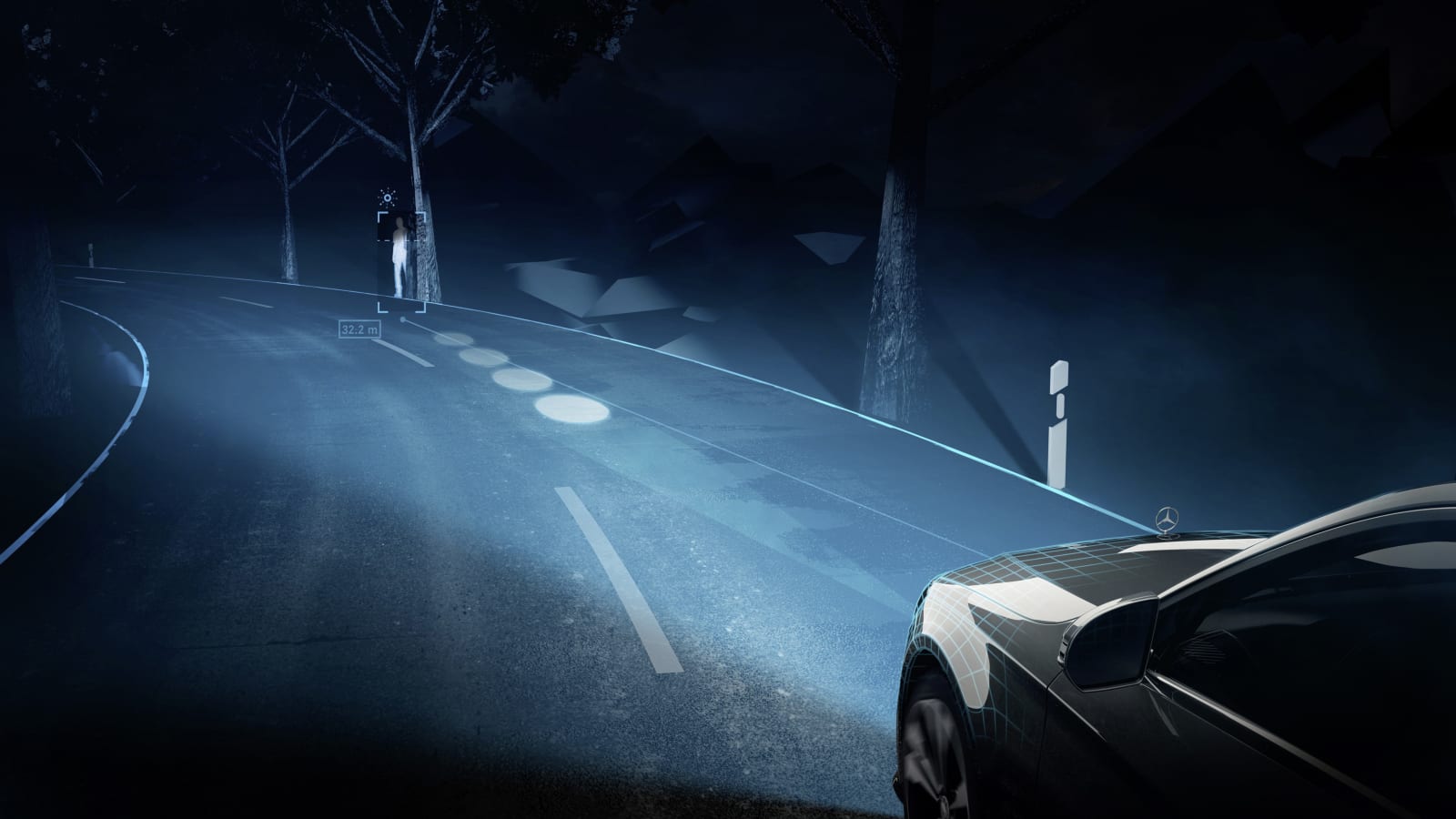 It’s so good that the lights can project guidelines or warning symbols onto the road. For example, if the car recognizes that road work is going on ahead, it’ll project a road work sign onto the road for you to see. Traffic light symbols, stop sign symbols and more can also be projected onto the road as warning for the driver. It’ll aim a spotlight at pedestrians near the road as you’re approaching, warning both you and the pedestrian. The navigation system’s topography reading will also allow it to adjust light over hills, so that when you’re cresting a hill, the lights pivot downward to the road as opposed to lighting up the sky above you.

This tech is ridiculously awesome, and we’re continually saddened that U.S. regulations forbid lights like these from U.S. roadways. The safety benefits of these latest lights are so obvious, but you’ll need to travel elsewhere in the world to experience them.

We’ve been hearing about Level 3 autonomy off and on with the new S-Class for a little while now. However, when we received the U.S.-specific press release, there was no mention of Level 3 autonomous driving to be found. Upon looking into the European information, we discovered that Mercedes does plan on offering such capability. However, it won’t be hitting German streets until the second half of 2021. And as of today, there’s no date on when it’ll be hitting American (or even other European) streets.

Mercedes calls the Level 3 system “Drive Pilot.” It’ll be usable “in situations where traffic density is high or in tailbacks, on suitable motorway sections in Germany.” (And by the way, “tailbacks” means traffic jams.) Mercedes says that when the system is active, the driver has the freedom to undertake other activities, such as browsing the internet or texting. There is no need to touch the steering wheel or pedals. That said, there are still plenty of restrictions. Currently, German law doesn’t allow the system to operate at speeds higher than 37 mph (though Mercedes says it’s capable of higher speeds), which makes it impossible to use in anything outside of a highway traffic jam. Mercedes also states that “the driver must remain ready to take control and be able to continue driving the vehicle manually within 10 seconds.” That means no sleeping. In fact, Mercedes has implemented a driver monitoring system similar in concept to the one in Cadillac’s Super Cruise that constantly monitors head and eye movements. If you’re not satisfying the computer, it’ll make you take the wheel back. If the driver fails to respond to all the car’s commands, it will eventually bring the vehicle to a stop in its lane and unlock the doors. 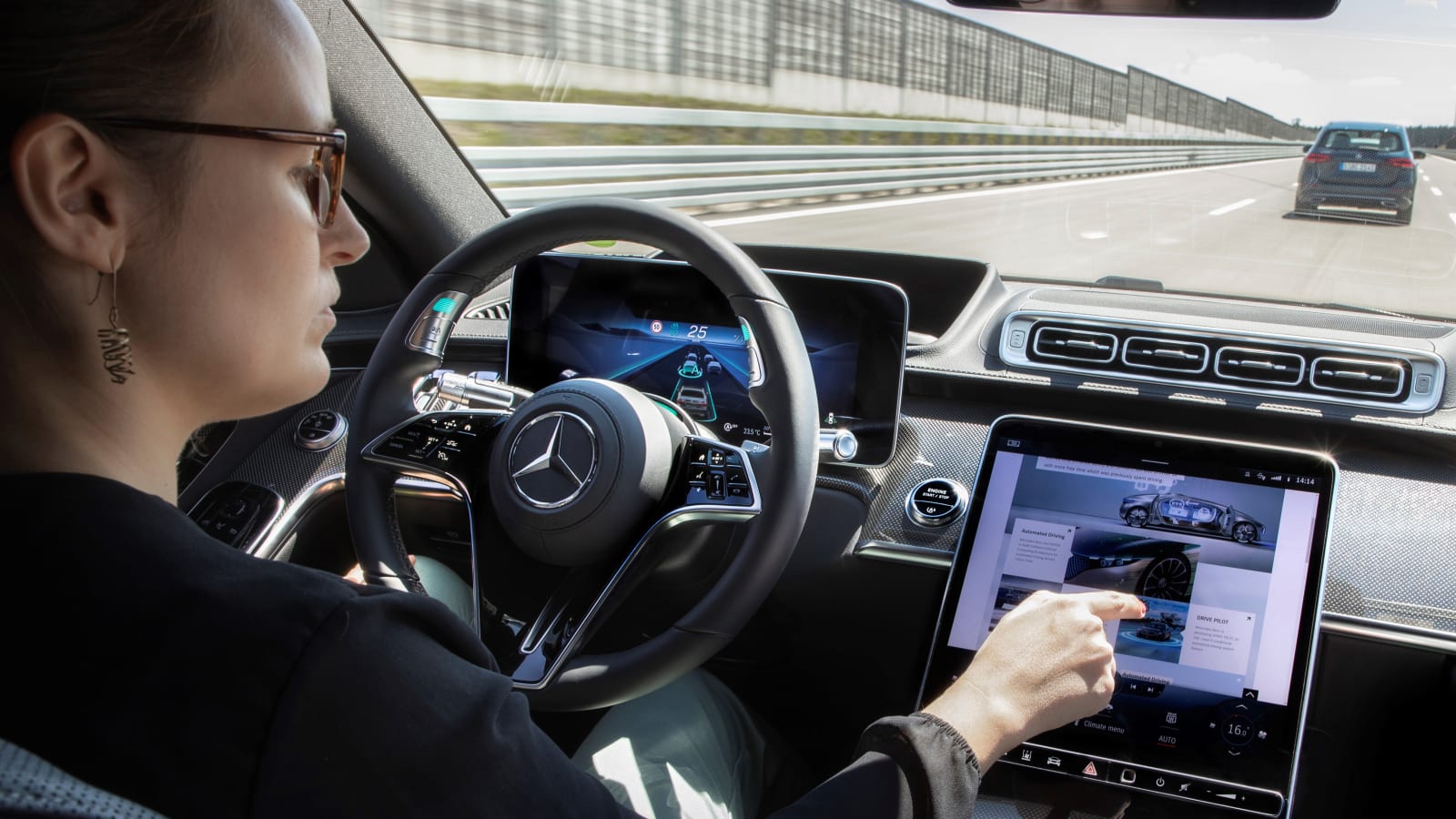 Drive Pilot is realized by a number of additional sensors on the car. In addition to all the standard sensors, Mercedes uses lidar, one additional rear camera in the rear window and more external microphones. These last two are especially useful at identifying emergency vehicles coming from behind, a common occurrence in traffic jams. An extremely accurate, digital HD map is also vital to its operation, giving the car information about the road geometry, route profile, traffic signs and traffic accidents (this last one uses the car’s internet connection for the most updated information). The vehicle’s location is found via mapping that is far more precise than a usual GPS system, too.

Mercedes says the system is ready for introduction to the U.S. market, but it’s waiting on the legal situation to allow such technology in a production car.

The second automated system we’ll touch on here is parking. Mercedes says the new S-Class is equipped with technology for Level 4 autonomy in specific parking situations. It’s called “Automatic Valet Parking,” and it’s true driverless parking tech. Assuming you’re at a properly equipped parking structure, you’d be able to drop your car off in a designated location, press a button on your Mercedes app from outside the car, and then it would go find a parking spot. No need for you to observe or intervene, the S-Class would handle it all. Once you return to drive home, you’d call your car via the app, and it would meet you at the designated valet pickup zone. Mercedes says this all depends on regulations in your area, and there’s no word of it coming to the U.S. yet.

A lesser parking package allows you to remotely control your car with straightforward parking maneuvers, similar to Hyundai’s Smaht Pahk. You stand outside the car, hold a button on your phone, and the S-Class will wedge itself in or out of a parking spot. 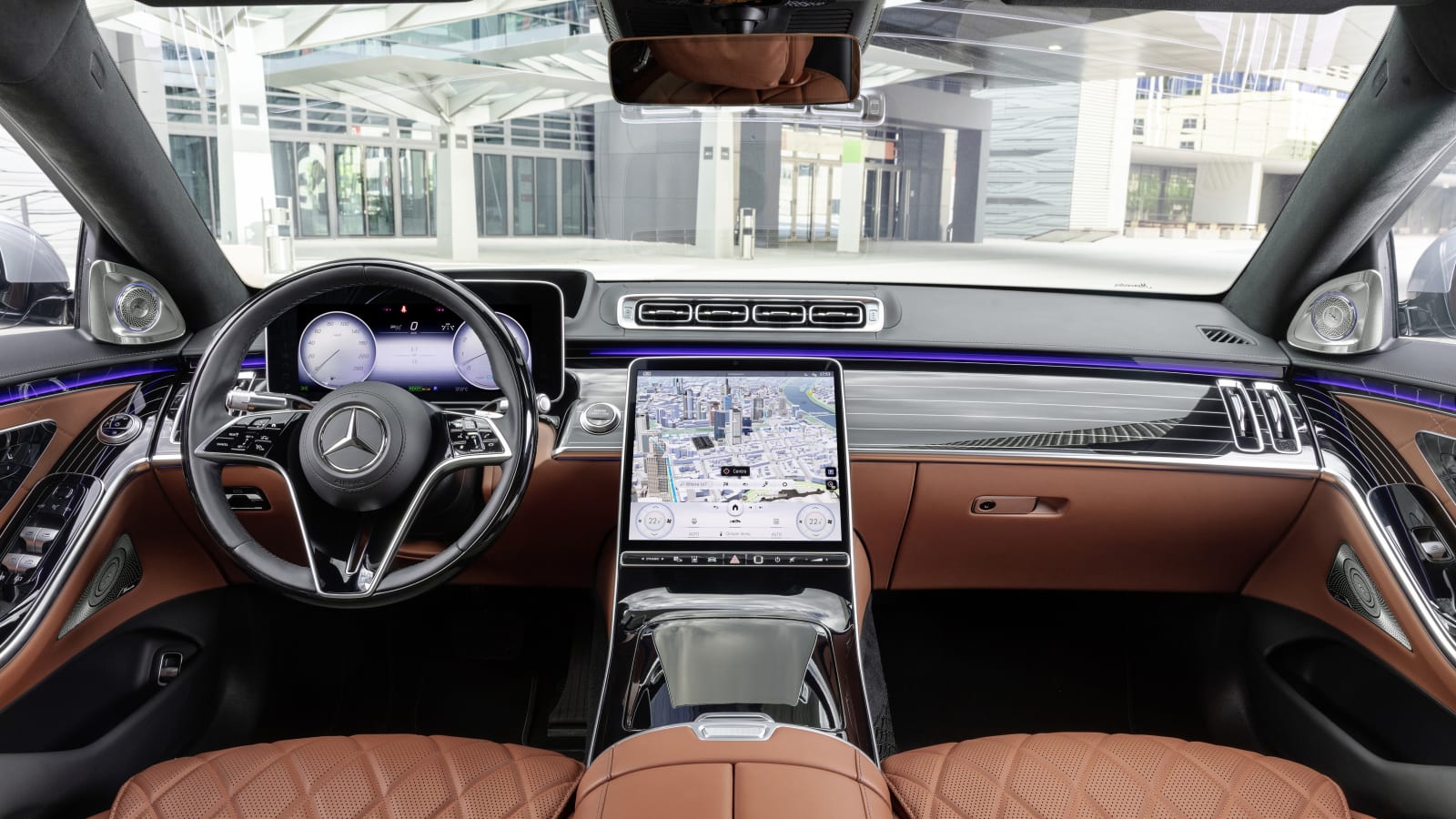 For in-depth details on the infotainment system, let us direct you to our detailed dive on everything screen-related in the new S-Class. Any and all questions you have about the second generation of MBUX and how it interacts with the new S-Class can be answered here. Trust us — there’s plenty to learn.