Around 12 million drivers in the UK are considering a switch to electric vehicles (EVs) by 2022, according to new research by Uswitch.com.

Some 4.3 million drivers (11%) say they will buy an electric vehicle in the next two years, and an additional 7.6 million motorists (19%) are considering purchasing one in that time.

The data is based on a survey of 2,001 UK adults between August 14-18, 2020. Results were weighted to reflect a nationally representative criteria.

Registrations of new EVs reached a market share of 4.6% in March — the highest proportion of sales recorded in the UK for battery powered cars.

Sarah Broomfield, energy expert at Uswitch.com, said: “EVs are becoming increasingly popular, and 12 million drivers could soon be swapping their petrol or diesel car for a more environmentally friendly one.

“The good news for these drivers is that EVs come with an additional financial benefit too — they cost far less to fuel than a petrol or diesel car.

“However, charging costs can vary depending on your energy tariff.

“If you are still on your supplier’s Standard Variable Tariff, charging your car could cost an additional £7.69 a month unless you switch to a more competitive fixed-term deal.”

Electric car drivers say charging their vehicle at home adds £30.90 a month, the equivalent of £370 a year, to their energy bills.

Meanwhile their petrol and diesel-driving counterparts say they spend £74.86 on fuel a month on average, or £898 a year. When adjusted for average mileage, electric vehicle owners save £27.48 a month compared to fuel, equal to £329 a year.

To ensure EV drivers are not paying over the odds to charge their car, Uswitch.com said owners should ensure they are on one of the cheapest fixed energy deals available on the market.

Consumers on Standard Variable Tariffs who are charging their electric cars at home could save up to £7.69 a month — £92 a year — by ensuring they are on the best energy deal.

Charging at home is usually cheapest for EV owners.

Motorway charging points are capable of delivering enough electricity to drive 100 miles in just half an hour — but it will cost about £6.50, compared to £4.15 on average with a 7KW wall charger at home.

Uswitch.com analysed the prices of new EVs and their cost per mile to calculate which cars it says provide the biggest cost savings over an average eight-year warranty period.

The compact Renault Twizy came out on top, costing 1.61 pence per mile, and a total of £11,745 including the purchase price after eight years.

10 of the best-value electric vehicles

10 of the most expensive EVs 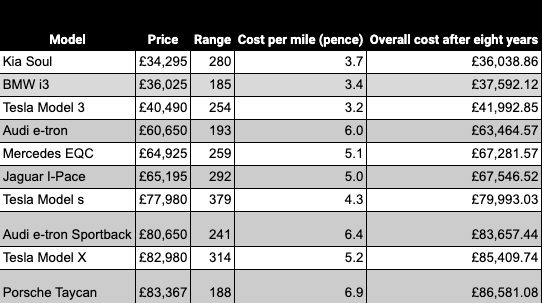