The slow drip of Lucid Air sedan teasers culminated Wednesday with the world debut of the production version of the startup’s electric car with a range of up to 517 miles. Starting below $80,000 and available in four initial variants, the first examples of the Lucid Air will arrive in customer driveways starting in the spring of 2021.

Lucid CEO Peter Rawlinson has a rather impressive résumé, seeing as how he had stints at both Lotus and Jaguar as an engineer before being poached by Tesla’s Elon Musk to work on what would become the Model S. Yeah, you could saw Rawlinson knows a thing or two about packaging electric sedans, which is where the Air sedan’s true strength lies.

Lucid’s engineers have found new ways to further minimize the intrusion of key components like drive units, chassis elements and crash structure in such a way as to open up the Air’s interior while retaining all of the advantages of its modular systems. Lucid calls it “Space Concept.” 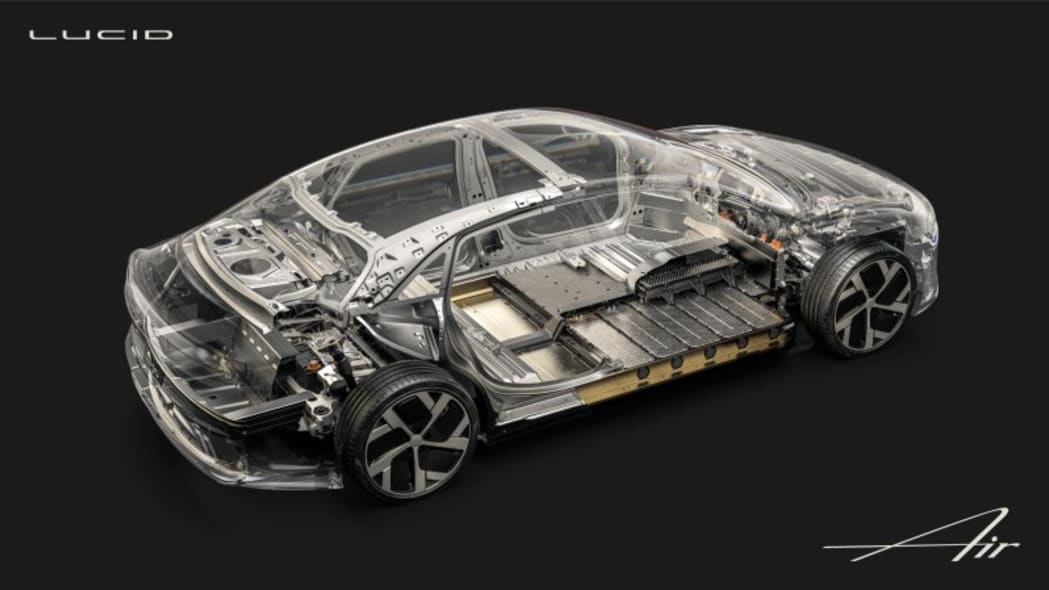 In addition to a spacious, futuristic cabin, Lucid says the Air offers a total of 26.1 cubic feet of cargo space. It lays claim to the largest EV frunk in the segment, at 9.9 cubic feet, which is more than double the Ford Mustang Mach-E’s 4.8 cubes. After doing some back-of-the-napkin math, we must conclude that the Air’s trunk boasts 16.2 cubic feet of cargo room. That’s cavernous — on par with a Dodge Challenger’s.

Speaking of the Lucid Air’s 1,080-horsepower powertrain, this dual-motor (one front, one rear) unit will propel the 500-mile electric car to 60 MPH in under 2.5 seconds as it makes its way through the quarter-mile in just 9.9 seconds. Lucid reckons that quarter-mile time is good enough to make its all-electric Air sedan the quickest four-door EV on the planet.

It’s also the quickest to charge. Lucid says its “Wunderbox” charging unit and native 900-volt charging support can replenish 300 miles of range in just 20 minutes; that’s nearly twice as fast as what a Model S is capable of. Tesla’s advantage will come from the size of its existing Supercharger network, but Lucid’s partnership with Electrify America should guarantee at least some infrastructure for early adopters.

Each of Lucid’s drive units is capable of producing up to 670 horsepower, but total performance of the flagship Dream model at launch will top out at 1,080 hp. During a media preview of the sedan, Rawlinson showed off an upgraded rear subframe module with two integrated drive units, ostensibly capable of advanced torque vectoring. Combined with a third unit up front, well, let’s just say there’s a lot more performance to be unlocked in future Lucid Air variants.

But power isn’t everything, and Lucid is hoping to attract buyers with a combination of future-proof technology, clean power, luxurious customization and, of course, a degree of exclusivity. After all, Lucid may want to help save the world, but the privilege will first go to those who can afford the Dream Edition’s healthy, six-figure price tag.

Take the battery capacity, for example. Like the rest of the Lucid Air’s fundamental engineering, much of the powertrain is modular. The long-range, 113-kWh battery pack is made up of multiple units sitting under the rear bench; on shorter-range models, this number can be reduced and the pack space replaced with a new floor panel that allows more foot room.

“The Lucid brand was created with a progressive, post-luxury mindset, ideally suited to meet the rapidly evolving needs of the most progressive buyers. We are heading into a future where conscious consumers see sustainability, advanced design, and technical innovation as equally important to more traditional luxury values of quality and craftsmanship,” said Lucid design chief Derek Jenkins. “We consider Lucid to be at the forefront in a shift in consumer preferences toward new brands that offer direct relationships alongside products featuring entirely new levels of technology, performance and design.” 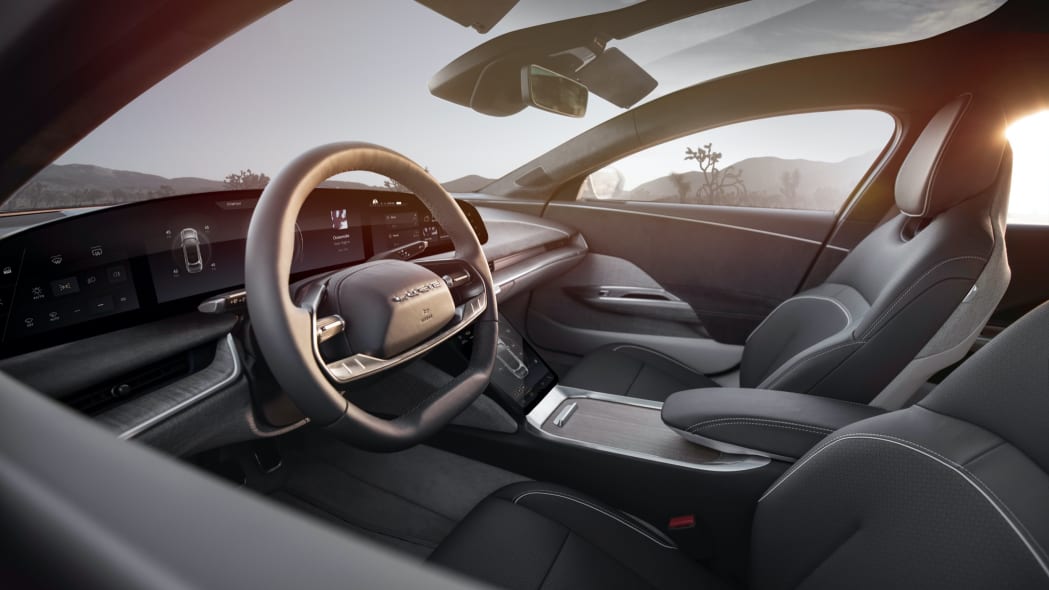 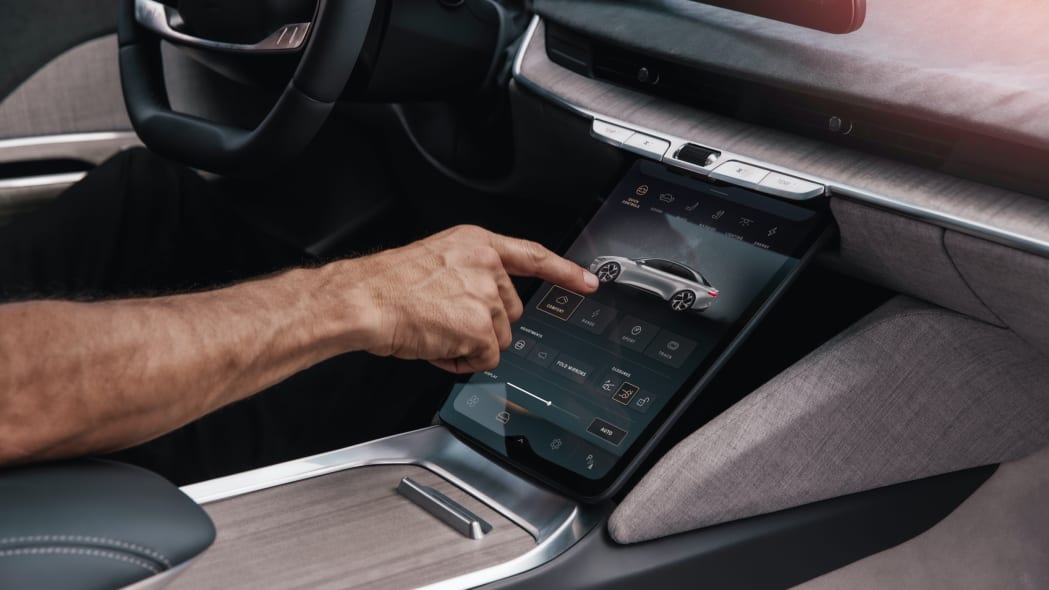 The Lucid Air will be available initially in North America and offered in four trims:

Note that none of the pricing above reflects available incentives.

Lucid says that even the base-model Air will come standard with such features as adaptive cruise control, lane centering, automatic emergency brakes and automated parking. It will also be one of the first production vehicles to be equipped with standard LIDAR — a laser-based sensor that detects obstacles and objects, including pedestrians — as part of the vehicle’s collision avoidance system.

We don’t yet have specs for the base Air sedan, but we expect it will compete with the meat of Tesla’s Model S lineup. The Touring model will pack 620 horsepower and up to 406 miles of range; the Grand Touring will up that to 800 horsepower and the full 517 miles; the Dream Edition gets all 1,080 ponies and either 465 or 503 miles of total range, depending on your wheel and tire choices. All range figures are preliminary and not verified by the EPA.

As for delivery and availability, Lucid has been taking orders for the Air sedan since last December, but if you’re in the market for one of the cheaper variants, you’ll have to wait longer. The first examples to be delivered will be the flagship Dream Edition, followed by Grand Touring shortly thereafter, Touring in Q4 of 2021, and the base model some time in 2022. Keep in mind that this timeline applies to North American deliveries, as Lucid has not yet finalized plans for overseas distribution.