Corvette owners have had a spacious cargo area behind them for a long time, but the C8 has flipped the script. With an engine behind the driver, the rear cargo capacity is drastically reduced. However, it has a new secret weapon too: the frunk.

Combined, the trunk and frunk are good for 12.6 cubic-feet of storage. That’s just 2.4 cubes down from the C7’s 15 cubic-feet of space. Numbers tend to fail at telling the whole story, though, which is why we decided to break out the suitcases. We’ve already seen the photos from Chevy (below) with a set of golf bags neatly tucked into the trunk. They fit, so no need to worry about giving up golf with your C8 purchase. 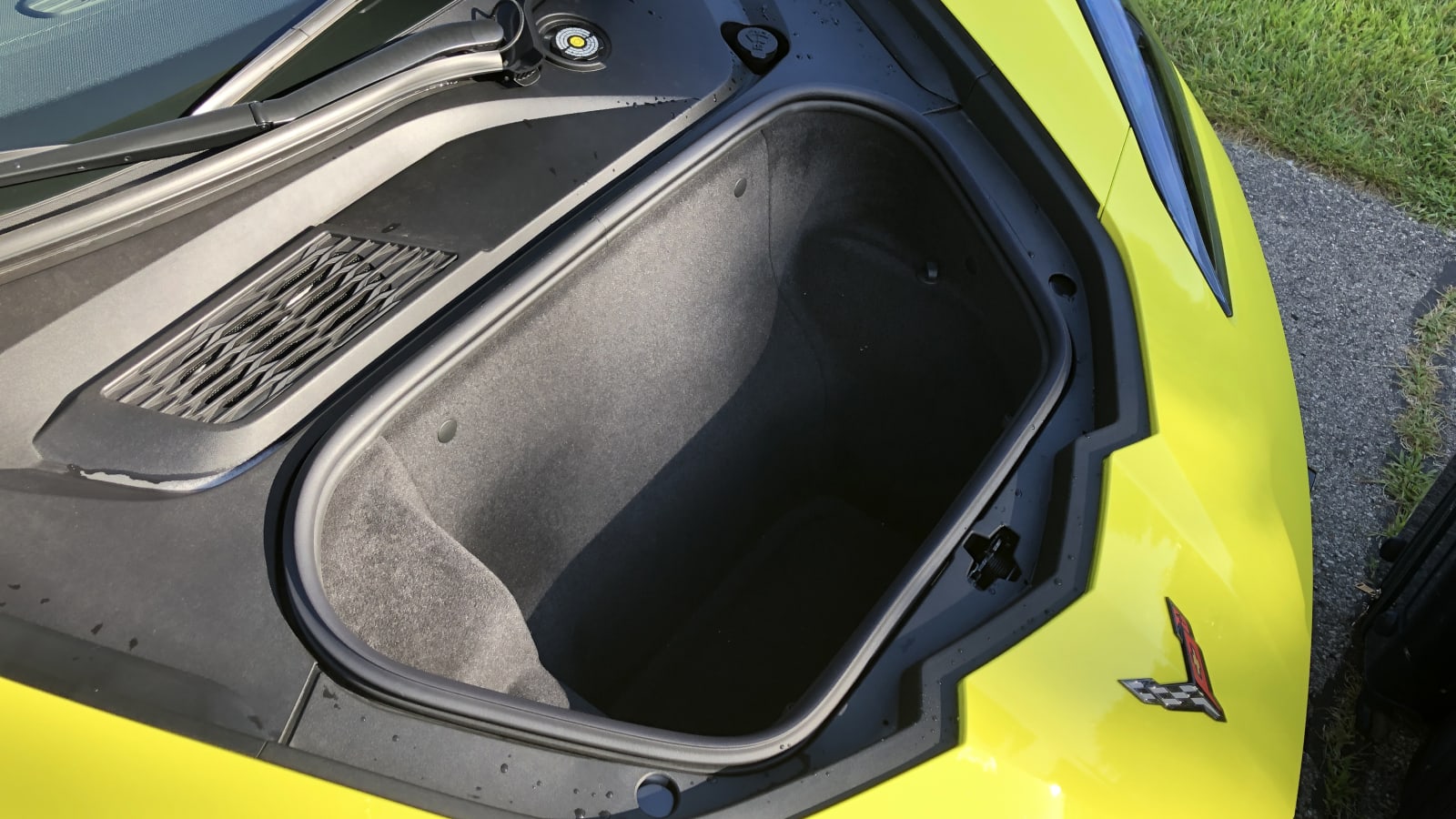 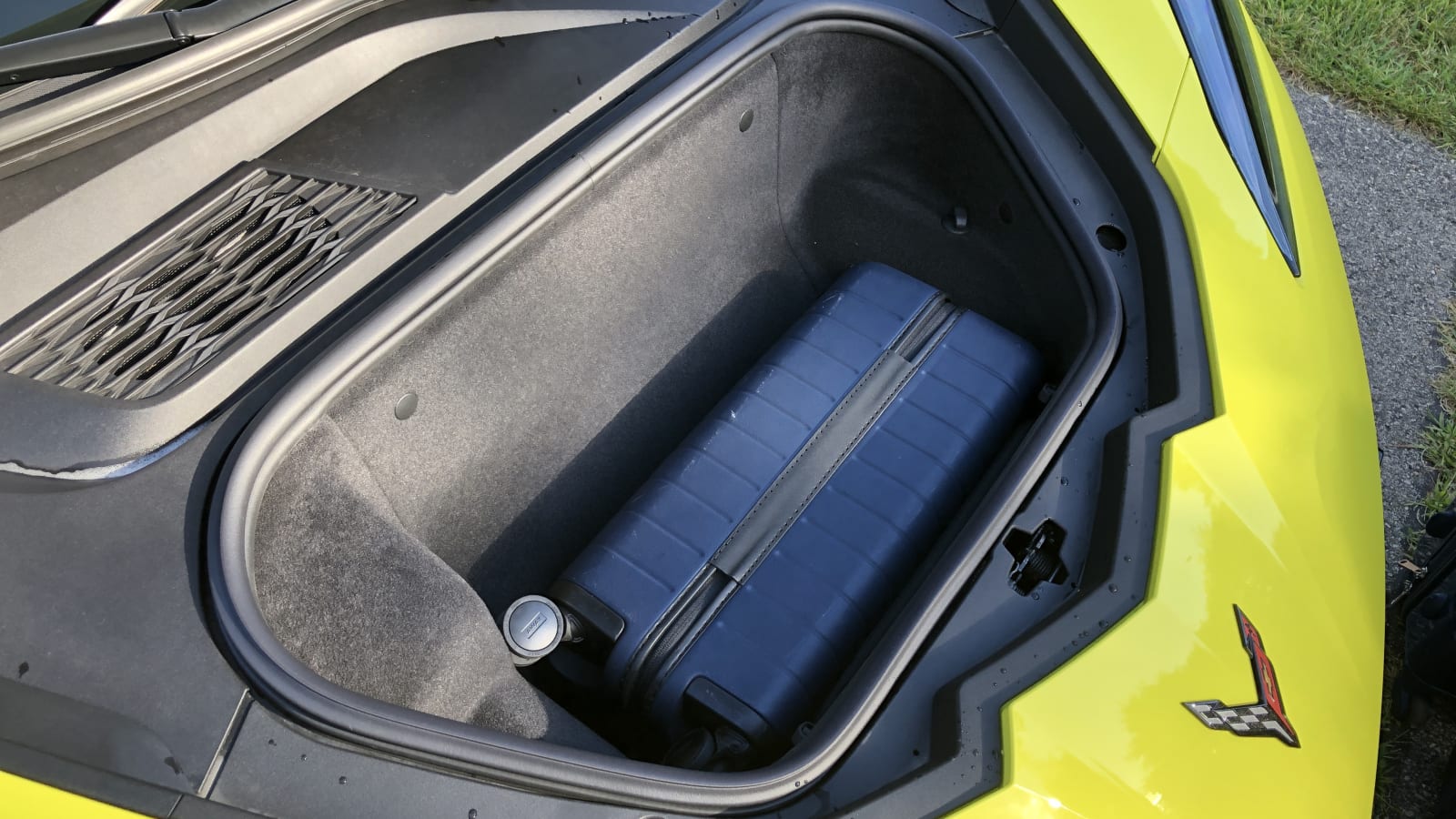 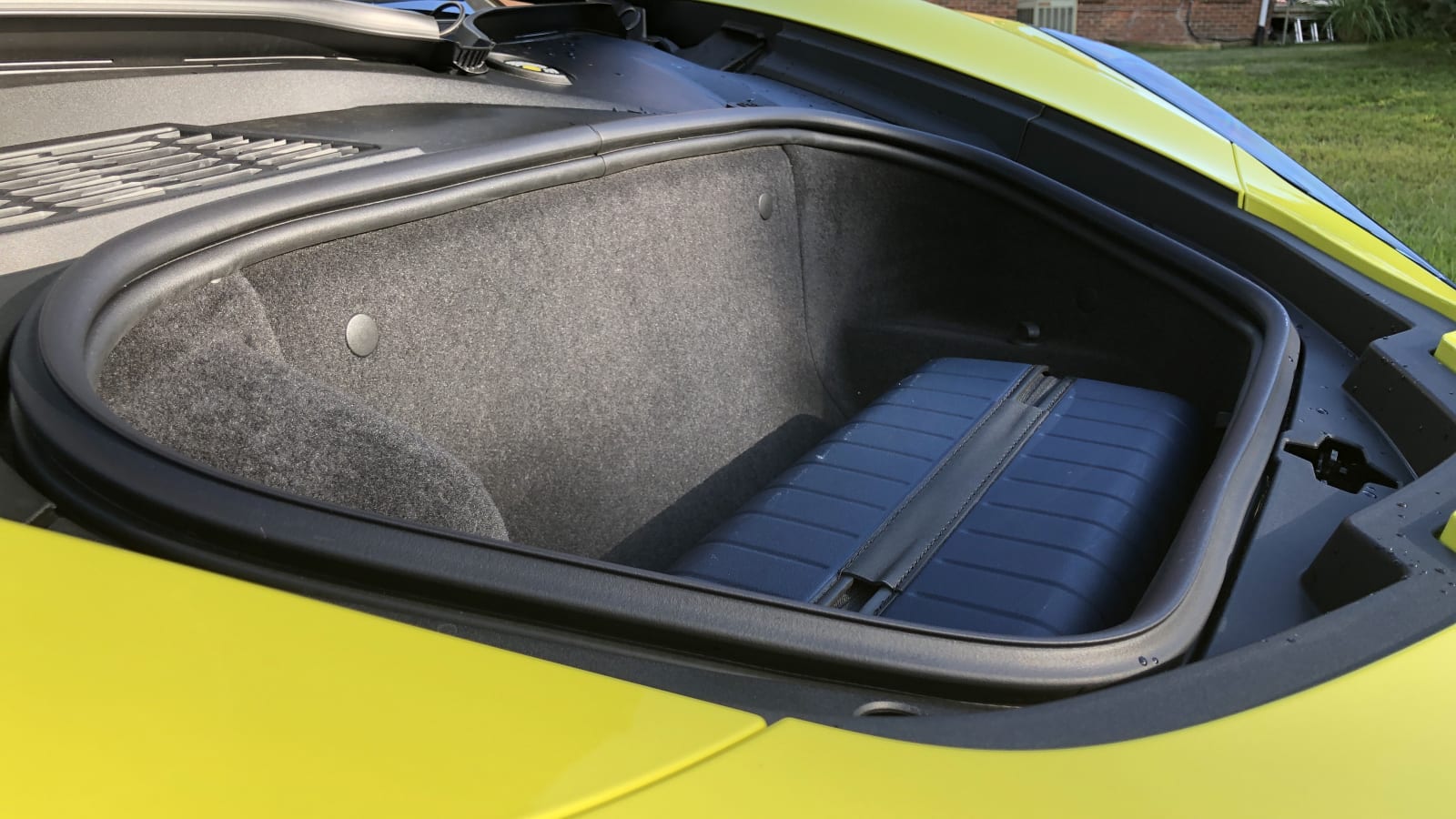 I started with the frunk. It appears deep at first, but that’s somewhat misleading. The front edge is low, which means you can’t stack suitcases. One carry-on suitcase fits, but there’s no way a second suitcase could squeeze in there next to it. The surface area of the floor is another limiting factor. Instead of laying it flat on its back, I had to insert the suitcase sideways. If the floor area were bigger, two carry-ons laid on their back would’ve fit — they do in the Porsche 911. 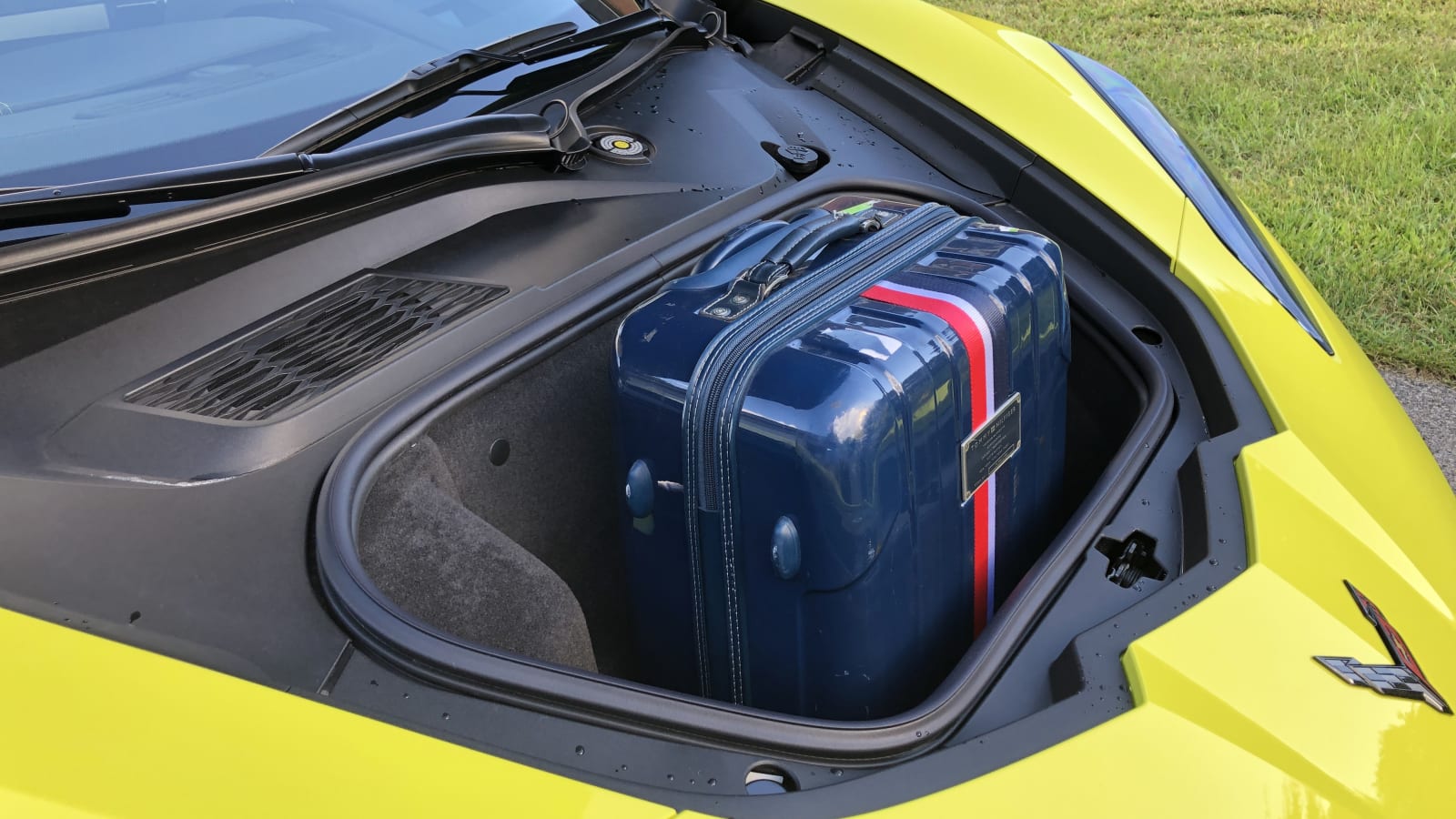 As an example of the height restrictions for suitcases, I stuck the medium size suitcase in the only way it’ll go. This one doesn’t fit at all, towering far above the frunk’s edges. I’ll also note that I had zero trouble with this Corvette’s frunk operation. Chevy has sent out an update to change how it opens via the key fob. It went from two quick presses, to one quick press and one long hold.

Then, I circled back to the trunk. Chevy hyped the trunk up a lot when the Corvette debuted. You can tell that designers prioritized space over a svelte shape for the rear of the car, as style has suffered for the extra cargo room. Its shape is strange, and there are tons of hard pieces jutting out that limit what you can pack. The overall depth is great, but you can only fit some weird odds and ends down in the crevasse that extends even deeper than the standard trunk floor. Chevy takes full advantage of the Corvette’s wide rear end and extends the available trunk space from one side of the car to the other, too. That’s not the case in every mid-engine supercar. 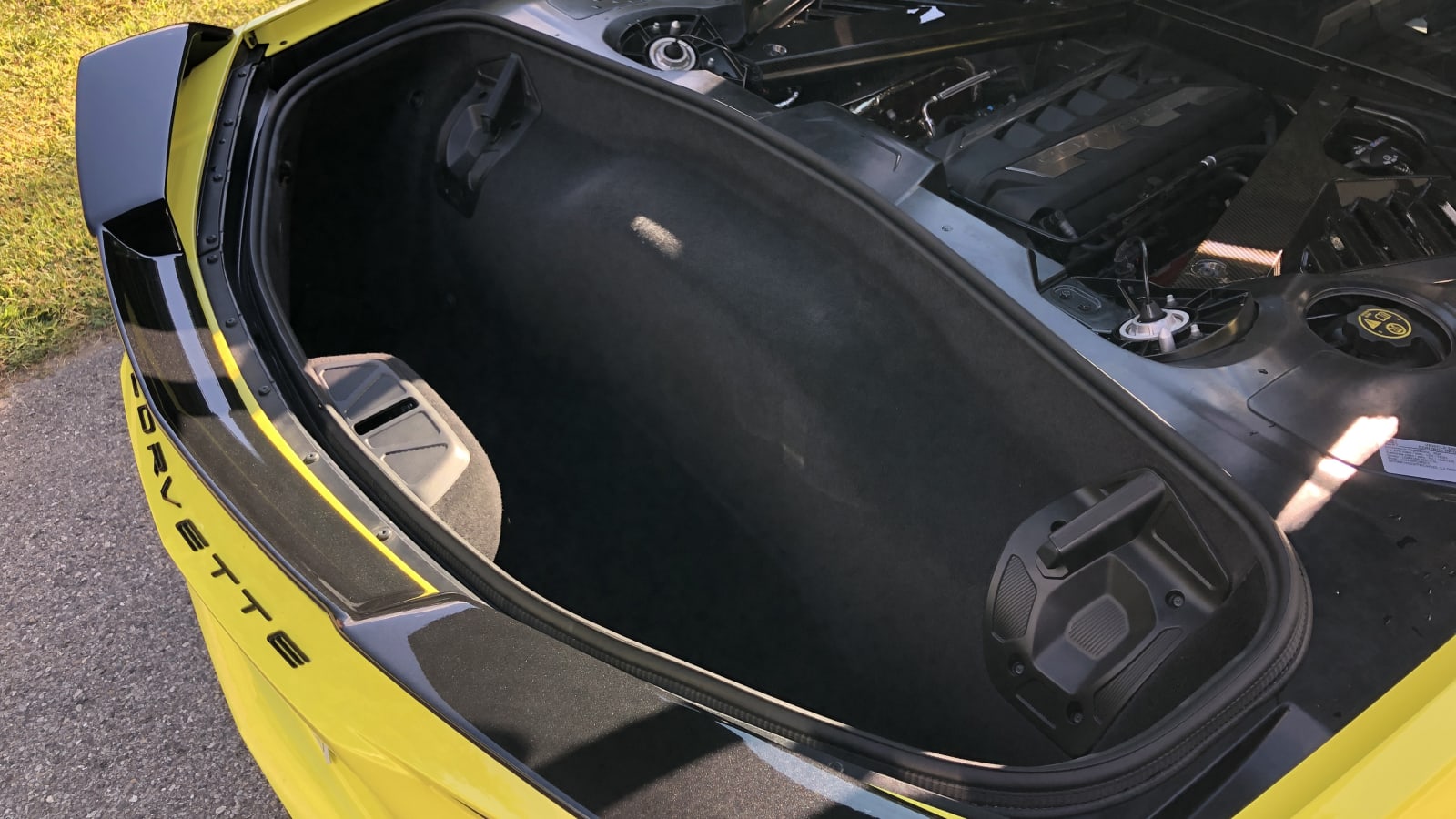 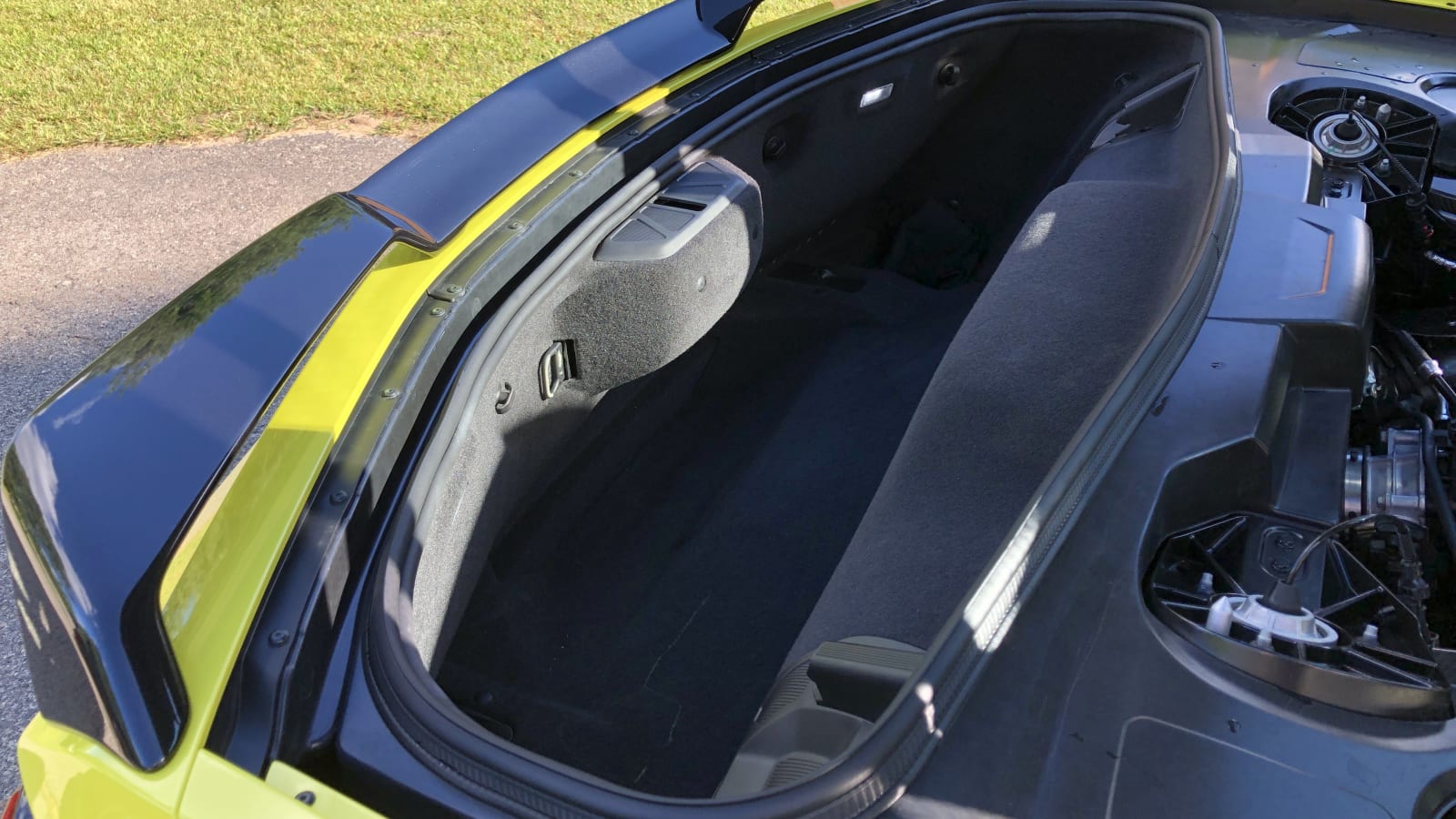 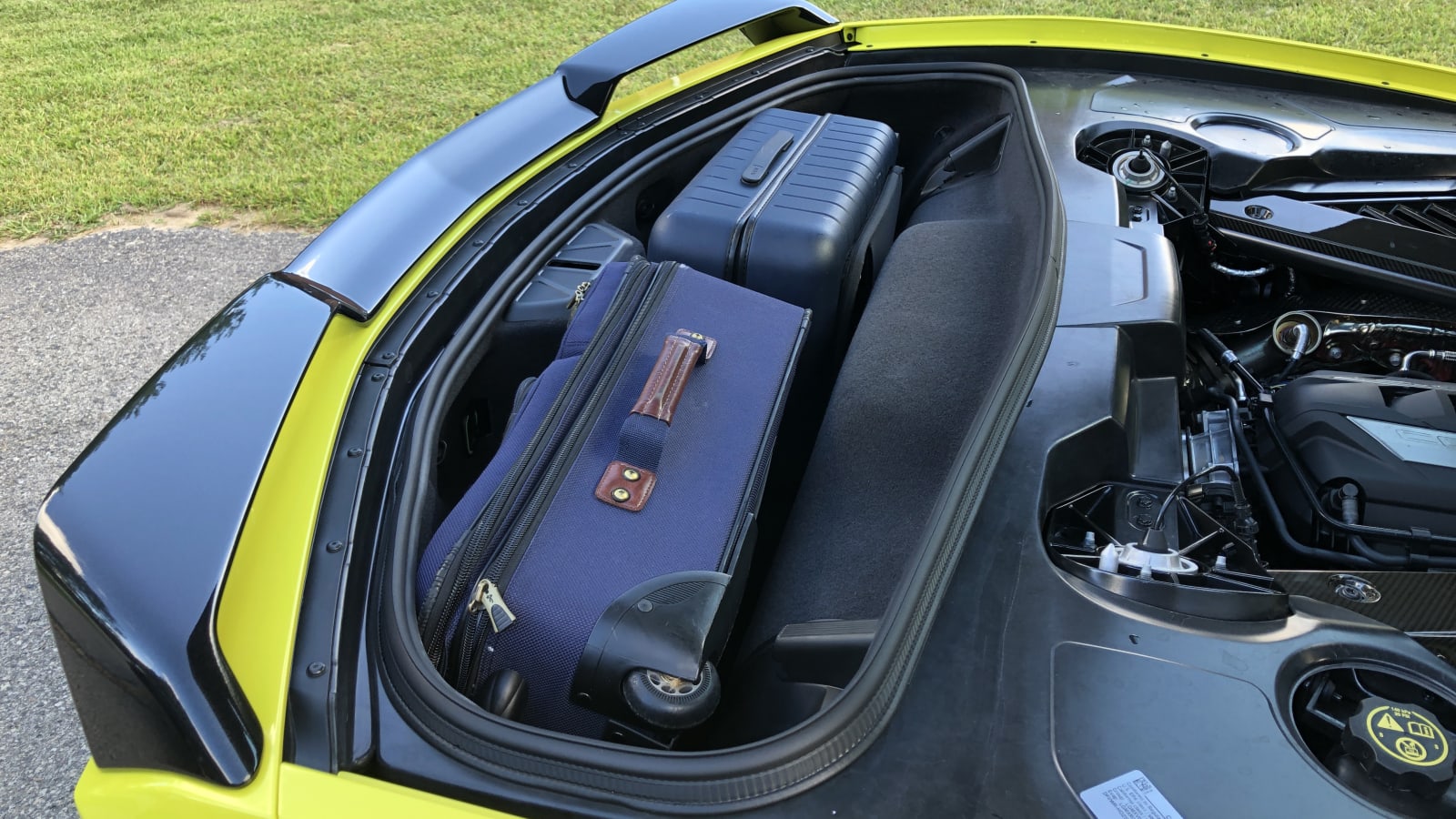 So, how about some suitcases? I stuck two of the carry-on suitcases in end-to-end … and that was it. They barely fit height-wise, but there’s ample room for them on either side. Small gaps in between, on the sides and under the suitcases could hold small items, but you sure aren’t getting another suitcase in there. Both the medium and full-size suitcases are too tall to fit. The lesson for new Corvette owners here? Invest in some quality carry-on suitcases for any long road trips, because that’s all you’ll be fitting in both the frunk and trunk of the car. 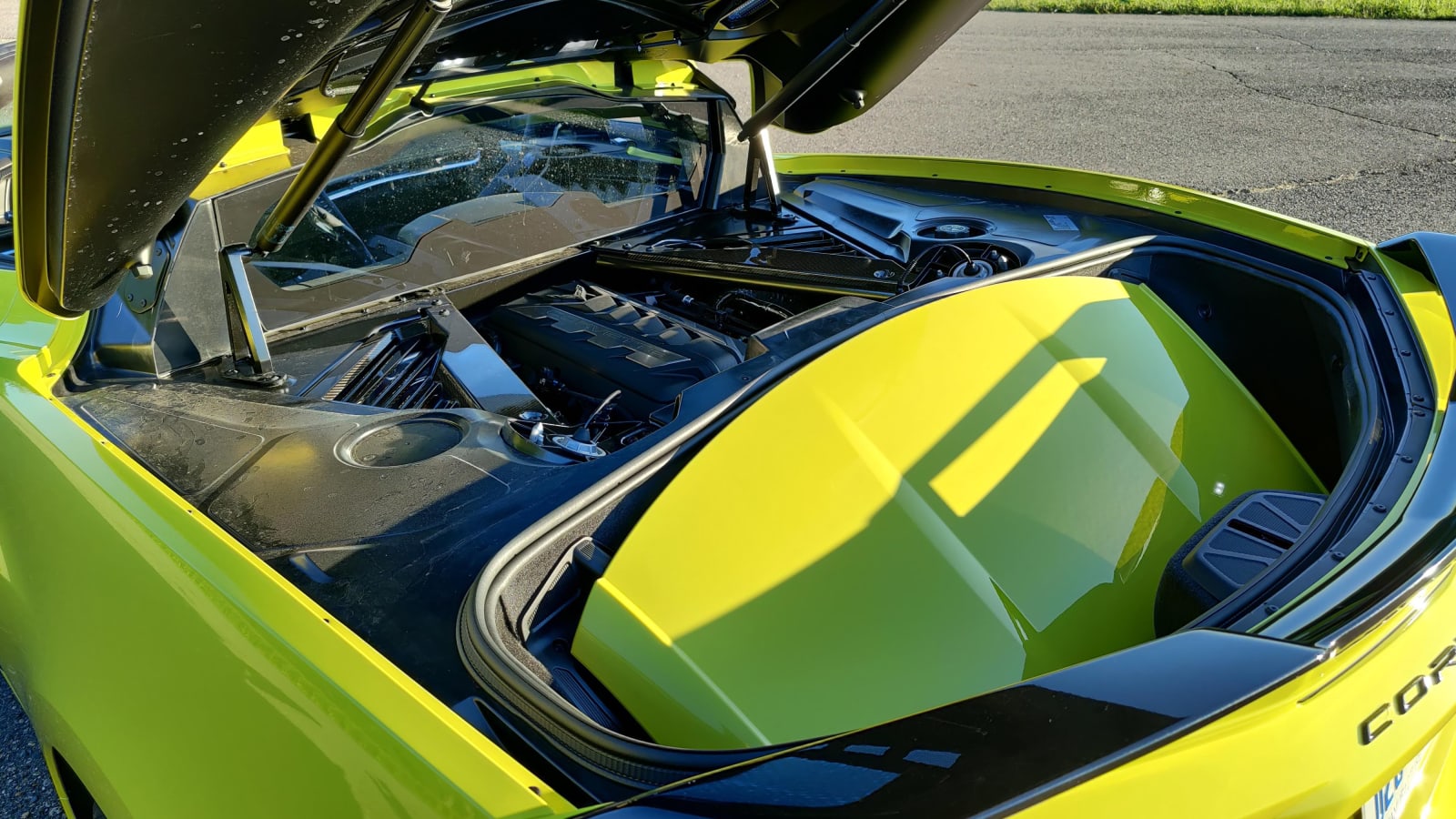 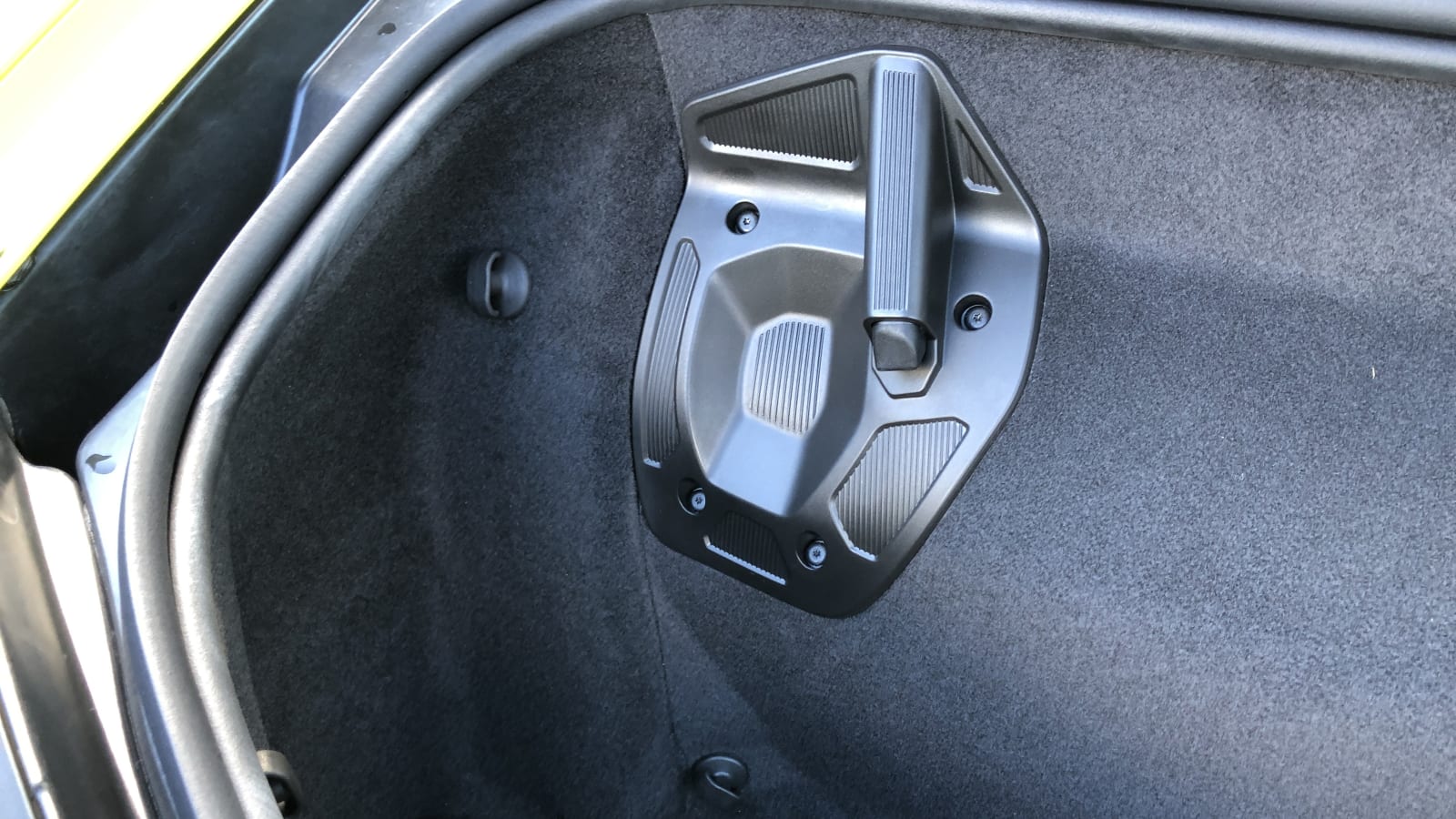 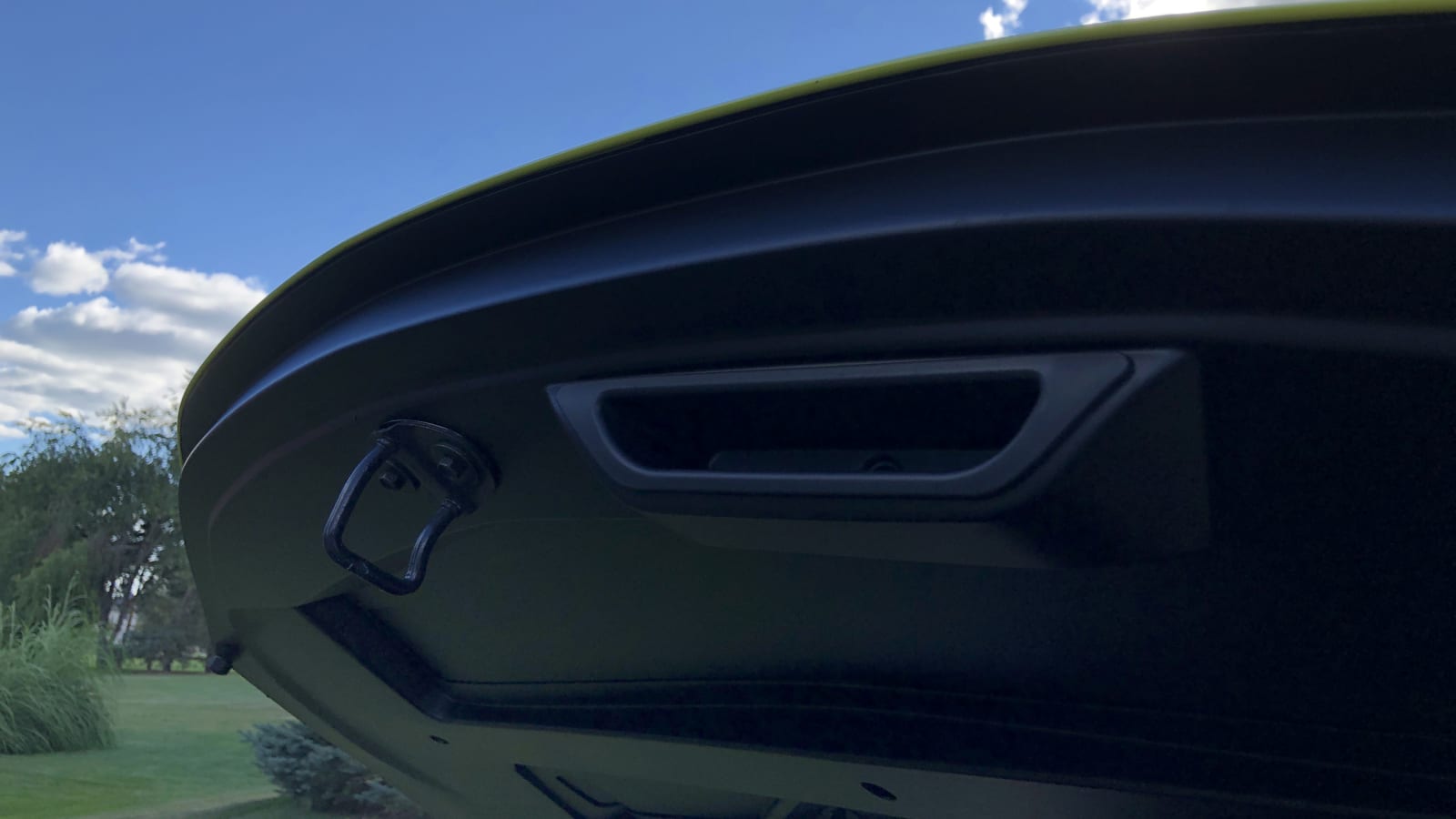 Three suitcases are plenty for a car that only holds two people, but do take note that you won’t be able to remove the roof if you use any part of the trunk. The roof panel fits snugly back there in a couple mounting points. It’s easy enough to unlatch, carry and set into the trunk by yourself. I removed it and put it back on the car at least 10 times over my week with the car. Closing the trunk is a cinch, too. Just pull down on the nice grab handle and swing it closed. If you’ve used enough force, the latch mechanism catches, and it whirs closed electrically.

If you want full impressions on the C8, check out our recent Road Test and video review of this exact Accelerate Yellow Corvette.