The 2020 Acura NSX is the kind of car you’re pumped to drive. You think about it the night before. You read up on it. You tell your friends and family. You notice passers-by admiring it in the driveway. They try to be sly. Some gawk. There’s anticipation.

But is there satisfaction? The NSX immediately raises two questions. Where does it fit among its contemporaries and does it measure up to its legendary predecessor?

Seeking the answers, I slip behind the wheel on a sunny morning. The NSX is a welcome respite from the cares of the world and concerns of the coronavirus. I’ve got a few hours ahead of me in a $203,000 supercar. It’s a good time to reflect.

Immediately, I have a sense of déjà vu. I drove an NSX in 2017 at Pebble Beach, but my senses take me farther back, to the fall of 2014 when I drove a 1991 NSX. I had the same anticipation, nerves even, as I prepared for that drive. Getting situated in the 2020 model, I’m struck by the simplicity of the NSX. A McLaren or a Lambo take a minute to figure out, but everything is easy to read and use in the Acura. Like the ‘91 NSX, it looks striking on the outside, but the inside is almost plain. I’m OK with that. Simple works for Porsche, which will happily sell you a six-figure 911 with a spartan interior.

I’m underselling the NSX’s cabin — which is actually quite nice inside — understated yet cool. My tester has a black interior with carbon-fiber accents and semi-aniline leather seats with Alcantara, though the big steering wheel is the focal point. Looking to my right, the infotainment anchors the center stack, and there’s a knob for tuning the drive modes and the push-button gear selector. The outward visibility is outstanding. Driving a supercar can be intimidating, and being able to see things is helpful, especially when you’re inches off the ground.

I accelerate onto a surface street where the speed limit is 45 mph. There’s a low growl, and then the NSX gets a bit angrier. It’s never quite uncouth, even when the revs spin up on the expressway. It’s surprisingly gutsy low in the band, around 2,000-3,000 rpm, and the soundtrack gets louder and better from there. Anticipation building, I near the onramp to Interstate 75 in Detroit’s northern suburbs, where I run into cones. And blockades. Construction work is a staple of summer in Michigan. More time on the suburban slow road, and I find myself growing more comfortable in the NSX. Unlike the Lamborghini Huracán, Audi R8 or even some Mustangs, the Acura is civilized, docile even. It reminds me of my first time in that ‘91 NSX, where my nerves gave way to cockiness. The old NSX was so drivable, agreeable even, that I’ve long believed it made the cliché “everyday supercar” a real notion.

Acura tightened the suspension, retuned software for the Super Handling All-Wheel Drive and made the steering more responsive for the 2019 model. It feels more buttoned-up than the car I drove in Pebble Beach before these updates. There’s more feedback in the steering, which previously felt a little light. The Continental SportContact 6 tires provide plenty of grip. The brakes return stopping power with little pedal travel — not as immediate as McLarens I’ve tested, but more balanced for daily driving. This NSX is equipped with the optional carbon-ceramic rotors, which look great with the silver calipers visible through the gray Y-spoke wheels. 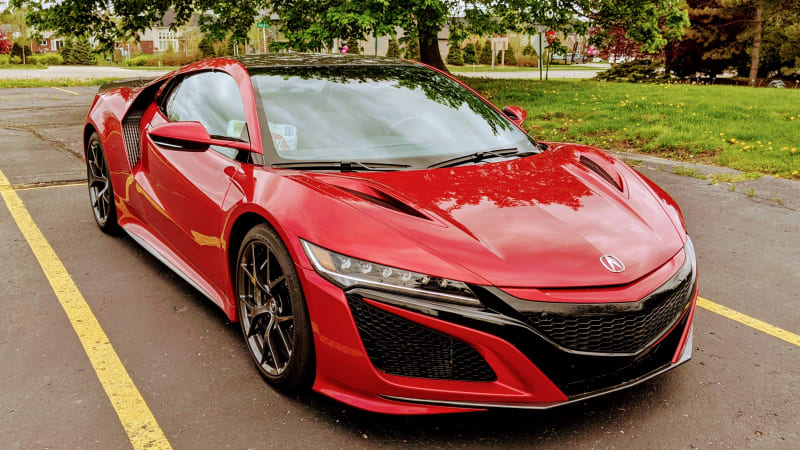 The other 2019 updates changed the grille accent to match the body color (it was silver before) and added gloss black trim in place of matte. Those sports seats I like so much and the tech package are now standard equipment.

The NSX is a striking car, especially in Valencia Red Pearl with the optional carbon-fiber elements, including the decklid spoiler, front chin spoiler, engine cover, rear diffuser and side sills. It’s beautiful, and in this shade it reminds me vaguely of recent mid-engine Ferraris. While I like the silhouette, the NSX is also a little angular and even busy, which is in contrast to the original NSX.

The expressway opens up as I make my way across town, sampling the driving modes. Sport mode is the basic setting, and Sport+ tightens up the chassis and makes the exhaust louder. I spend a decent amount of time in Quiet mode, which is actually all electric at speeds of less than 50 mph for brief periods. A couple of neighbors on bikes didn’t see me coming, then did triple takes trying to process what exactly was coming at them.

That stealthy capability belies the NSX’s raw power. Between the 3.5-liter V6 and electric motors, the NSX puts out 573 total horsepower and 476 pound-feet of torque, enabling sprints to 60 mph in 2.9 seconds en route to a top speed of 191 mph. The sequential paddle shifts summon all of this power into your fingertips, and pulling the paddles at high speeds while gripping the steering wheel with traffic parting gives even the novice performance driver a bit of a Senna streak.

The NSX is a car that you discover as you drive. There are layers to its personality. I learned a lot about the NSX, and Acura, simply by running errands. That’s not something every car gives you. Critics point to the “everyday supercar” label as a discredit, that the NSX is somehow watered down. It’s not. It’s cerebral yet passionate. What it lacks in flash it makes up for with a breadth of capability.

Let’s return to my original questions. How does the NSX compete against modern exotics, like Audi, McLaren, Ferrari and the like? It’s a peer. And that’s enough. It’s not the best of the bunch, but it’s competitive and interesting.

More weighty, how does the 2020 NSX measure up against the first generation? It does not break new ground in the way its predecessor did, which is not necessarily a demerit. When the New Sportscar eXperimental debuted in 1989, Ferrari and Lamborghini were making erratic cars that were at times as dangerous as they were exclusive. The notion of actually driving your supercar as I did on this bright Saturday was inadvisable. The NSX changed all of that. In that era there was room for improvement. Now the market is more mature, and even mainstream American brands like Chevy and Ford offer mid-engine performance.

It’s tough to compete against your younger self, but that’s not the point. The point is Acura chooses to make an NSX, and it’s excellent in the ways a modern supercar should aspire to be. The NSX crashed the party once. Now it’s simply accepted as part of the establishment.