The 2020 Nissan 370Z 50th Anniversary Edition is a last-gasp effort at making the old 370Z as relevant as it can be today. Mechanically, the special edition is the same as a 370Z in Sport trim. That means it has the limited-slip differential, upgraded brakes and Rays 19-inch forged wheels. A 3.7-liter V6 with 332 horsepower and 270 pound-feet of torque is under the hood, and our tester is equipped with the six-speed manual transmission. Nissan is channeling its historic Z car past with this special edition car, specifically, it’s celebrating the 1969 Nissan 240Z and the #46 BRE 240Z of the SCCA National Championship years.

Two choices are available for the 50th Anniversary Edition car: White/Red, or Silver/Black. One of the Silver/Black 370Zs showed up to our offices, and while we may prefer the White/Red look in photos, this 370Z still managed to stop us in our tracks. The package for the special edition itself is $2,600 on top of the base car and includes the following exterior appearance treatments: an anniversary side marker decal, exterior graphics, 50th Anniversary badging and red wheel accents. The interior adds things like a 50th Anniversary tachometer, special kick plates, leather seats with suede inserts, unique stitching, suede door panel inserts, a suede/leather combination steering wheel and a leather-wrapped shift knob. Equipment additions include a power driver’s seat and heated seats. Our tester had unique 50th Anniversary floor mats added in for an additional $290, bringing the grand total to $37,605.

Senior Editor, Green, John Beltz Snyder: After taking this out to grab lunch, I asked my colleagues when I returned to the office, “Do you hate technology but adore confined spaces?”

In all fairness, though, I always love getting behind the wheel of a Z car. Sure, there’s no infotainment screen, just a small LCD display, no adaptive cruise control, etc. When I took the car home for the night, though, I didn’t really miss that stuff. In fact, it was a welcome break from tech, and allowed me to simply enjoy the drive. All the analog gauges look good, and there are a number of them in view. I love how when you adjust the steering wheel, the whole instrument cluster moves with it, making it feel as though the car wraps around you like a glove.

The one piece of notable tech is the rev matching of the S-Mode. It’s not a rarity anymore, but years ago, the Z was one of the first cars I recall driving with rev matching. I’ll let one of the other editors talk about the driving dynamics, but that feature brought fond memories. Pretty much everything in this aging but still charming coupe does. 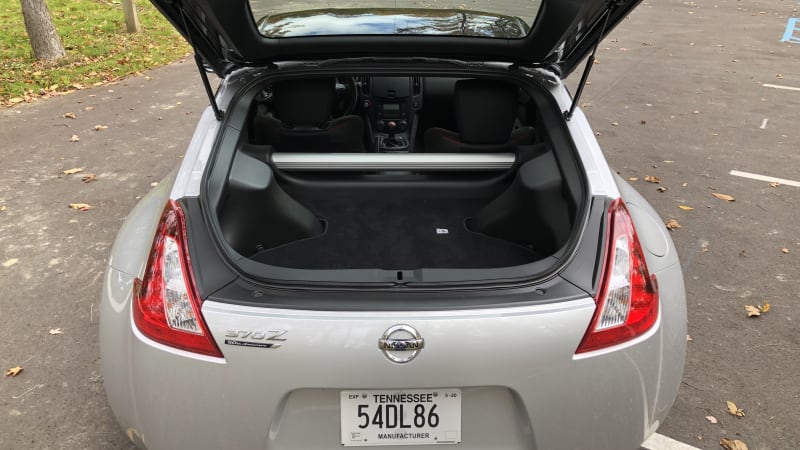 Assistant Editor, Zac Palmer: After a certain point, you hear too many negative things about the 370Z being old, that even the thought of the sports car puts a negative taste in your mouth. At least, that’s what the anti-hype machine has done to me over the past several years. One spirited drive of the Z dramatically changed my outlook.

Turns out, I adore the 370Z. No, I didn’t fall for the ages-old radio or tired design. I fell for the way this car drives. Sports cars constantly get “better” by adding advanced tech like personalized drive modes, fancy screens with fairly useless data and taking away the manual transmission. The Z doesn’t do any of that. The throttle response is just flat-out good as-is — no “track” throttle mode necessary. You can’t stiffen the shocks up to washboard stiffness at the touch of a button. Nor can they be set to comfort mode (alright I do miss this). Instead, the car is well damped as is, and it’s a bit stiff. That’s fine. The 370Z is a sports car.

A free-revving naturally aspirated V6 is super refreshing in the age of boost, and this one sounds spectacular. Nissan uses the speakers to enhance natural engine noise, so it’s not completely without new-fangled tech enthusiasts complain about in sports cars. The real story here is how strong it still feels. I’ll sacrifice the low-end torque of a turbocharged motor for the screaming and yowling race to redline in this car any day. It’s an engine — and a car — that left me happy as can be after clambering out of its low seat. I recognize all of its weaknesses (there are many), but the 370Z is a sports car done right that most enthusiasts would fall in love with from behind the wheel.

Editor-in-Chief, Greg Migliore: I’m surprised no one has focused on the design. I still love the look of the 370Z. I think it’s held up well. It’s proportional, demonstrative, and the headlights and wheels accentuate the distinctive silhouette. The 50th Anniversary package that we drove was cool — Nissan says it channels the spirit of the Brock Racing Datsun liveries — but I would probably steer toward a more basic Z coupe. The sports car has a presence on the road, more so than a Toyota 86 or Subaru BRZ, in my opinion, even though those are far better handling machines.

Given the lack of updates in recent years, a lightly driven used 370Z is probably the best way to go. It’s a niche product at this point in its life, but the heritage comes through in its appearance, which is reason enough for Nissan enthusiasts to still enjoy them. 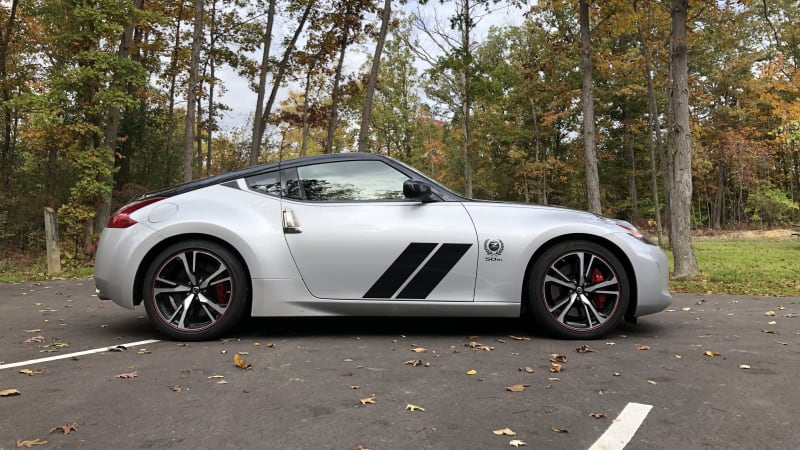 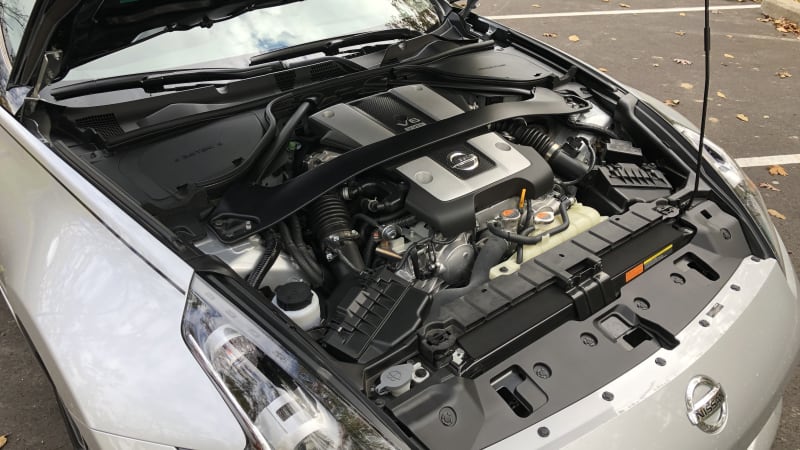 Associate Editor, Joel Stocksdale: Looks like I get to be the party pooper, here. While I do think the 370Z looks killer in its 50th Anniversary duds (Nissan should offer a black and gold variation, by the way), and it certainly performs better than one would expect after all these years, the Z has far too many problems that are addressed by its competition.

I’ll start with the interior. The simplicity can be charming at first, but a pain to live with. There’s no telescoping adjustment on the steering wheel, making it harder to get a comfortable driving position. That’s something I can forgive on something like a Miata that’s trying to save every ounce of weight possible, but not a 3,386-pound coupe. The stereo head unit would have been up to date in 2005, but it’s ancient nowadays. Finding your music and podcasts is inconvenient with it, and the voice menus you have to go through to pair your phone and make calls are a nightmare. It’s inexcusable, too, when the equally old Nissan Frontier gets a fairly modern infotainment system on the base model that doesn’t have power windows, locks or even power mirrors. Most of the Z’s competition has a rear seat that, while not practical for passengers, adds an extra level of cargo flexibility the Nissan lacks.

As for driving experience, the Z does better, but it doesn’t surpass the competition. The Subaru BRZ and Toyota 86 handle much better, with far more communicative chassis and steering. I find their shifters to be better, too. They also offer a simple feel while addressing some of those basics I listed above. The Camaro and Mustang also handle and steer as well if not better than the Z, but are more civilized and comfortable when simply cruising around.

Then there’s the price. The 50th Anniversary Z starts at about $36,000, which is enough to get you either a base V8 Camaro or Mustang, or the 1LE Camaro with a 4-cylinder or V6, or the new Mustang EcoBoost High Performance Package. All of those offer much more performance for the money. Now, you can get a base 370Z for about $30,000. However, you lose the limited-slip differential, and you can still get a base BRZ, 86, Camaro or Mustang for less, but retain a limited-slip differential, have more modern amenities, and in the case of the American coupes, still have nearly as much power as the Z.

Basically, the Z is still stylish, and there’s fun to be had with one, but it’s a poor value that’s outclassed by the competition. Only die-hards need apply for a new one. Here’s hoping the next generation rectifies the current car’s issues.