We’ve already taken a very deep dive into the 2020 Ford Escape interior, but there was one exception to that dive: cargo space. Well, the time has finally come. I know, right? Totally exciting.

Ford says the new Escape has 33.5 cubic-feet of space behind the raised back seat. That compares to the outgoing generation’s 34 cubic-feet, as well as the Honda CR-V at 39.2 cubes and Toyota RAV4 at 37.5 cubes. Judging by my experience with them all, that 33.5 figure seems perfectly accurate or at least comparable across most brands. No shenanigans or oddities here.

However, the Escape’s cargo capacity is complicated since unlike the CR-V, RAV4 and old Escape, it has a sliding back seat that increases cargo capacity. Sure, you lose rear passenger space in the process, but maybe you don’t need that? Having the option certainly is nice. To see how much the Escape can fit inside versus those competitors, as well as the difference sliding the back seat makes, let’s haul out the bags. 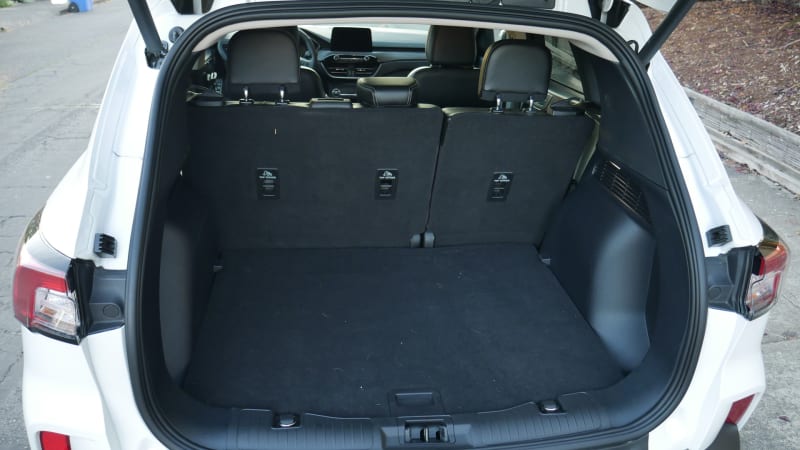 Actually, before we begin, there’s another element. The two above images may look identical apart for lighting, but look closely in the right rear portion of the floor in the picture on the right. See that little nub? It’s not there in the left picture. That’s because the Escape has two cargo floor heights. The difference is maybe 2 inches (see below). Why bother, then? Because the higher floor aligns with the folded seat backs to create a near-flat cargo floor. As I was only measuring the space behind the back seat, I left the floor in its lowest position for all tests going forward. 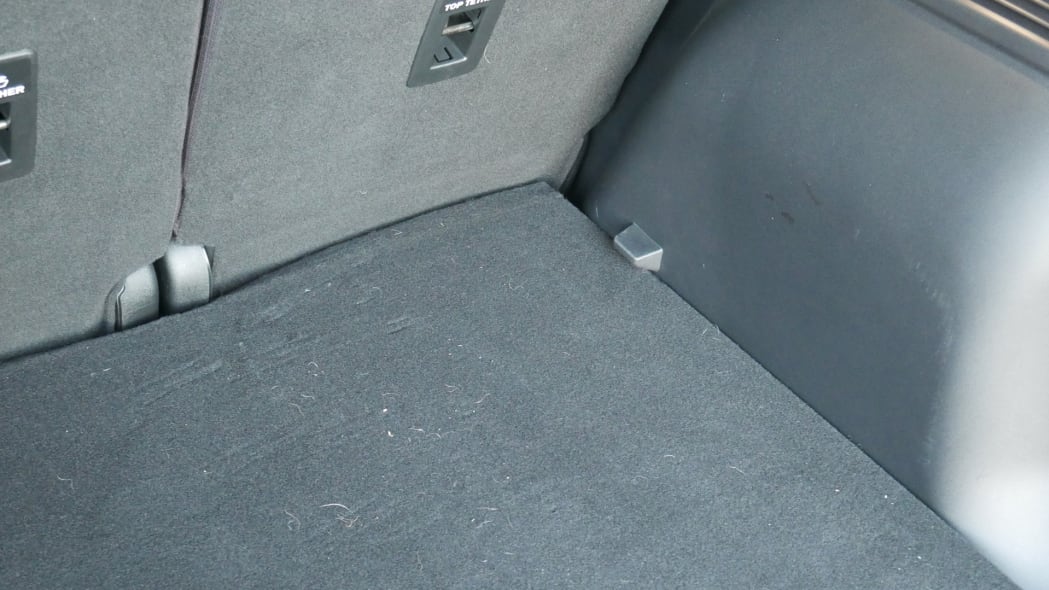 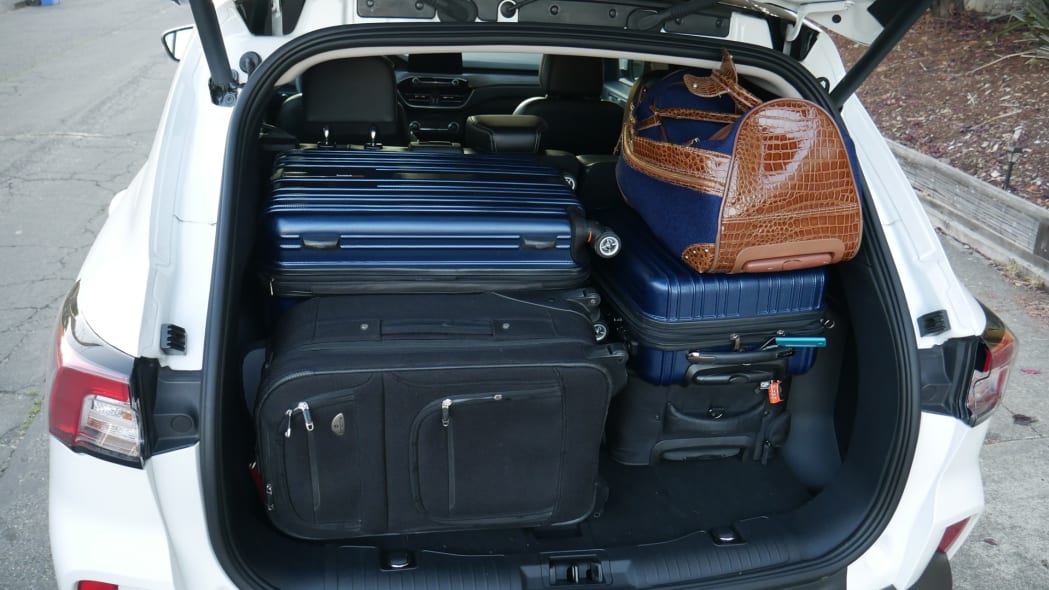 All the bags fit with the seats all the way back and reclined to a typical, comfortable angle. However, as you can see, the fancy bag barely fits and is blocking rearward visibility. Here is what the CR-V and RAV4 look like with the same number of bags AND with their cargo covers still in place. The Escape didn’t have one to remove. 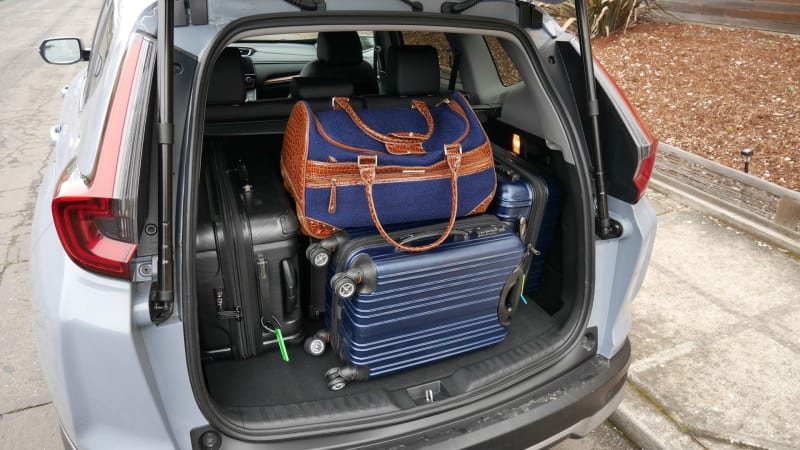 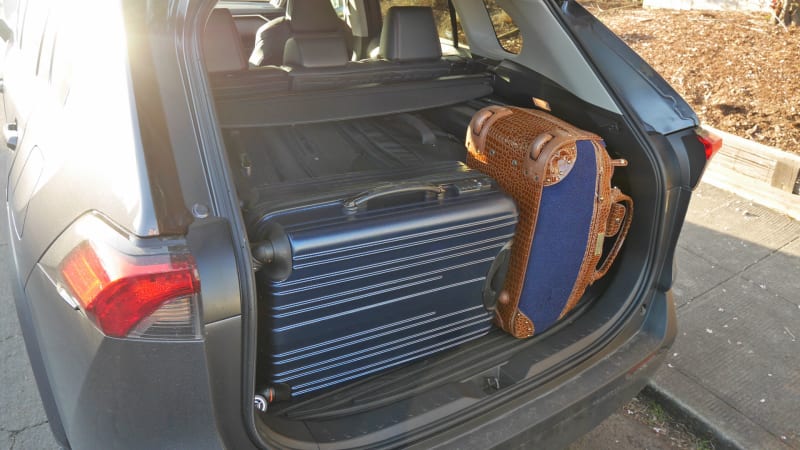 When you remove their cargo covers, the CR-V and RAV4 can hold this much. 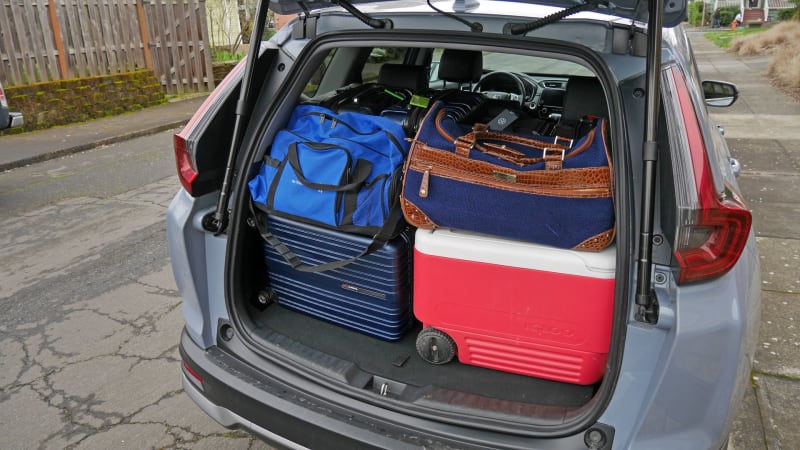 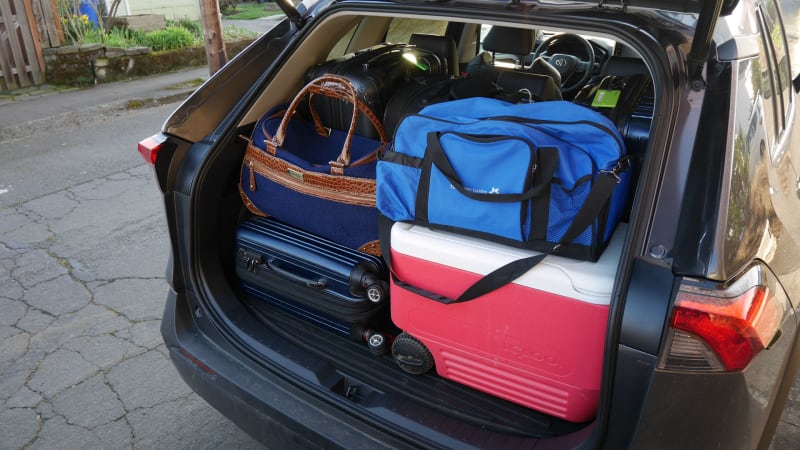 That is just not possible in the Escape. I tried. Even when I slid the seats fully forward, that Coleman cooler was not going to fit. However, sliding those seats does indeed increase space. 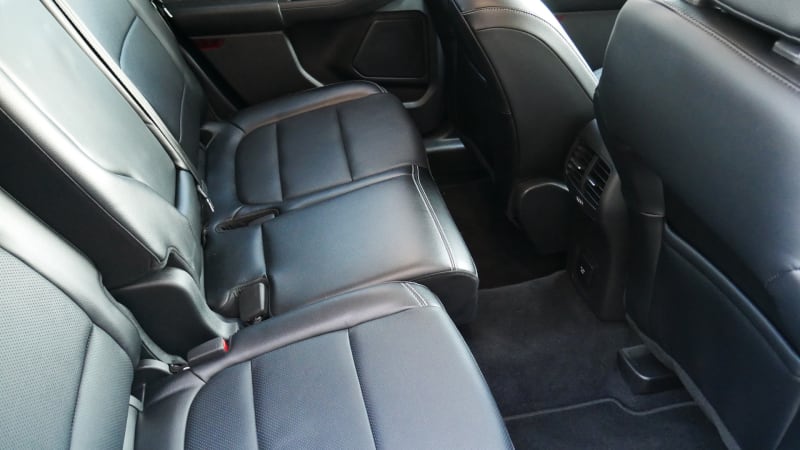 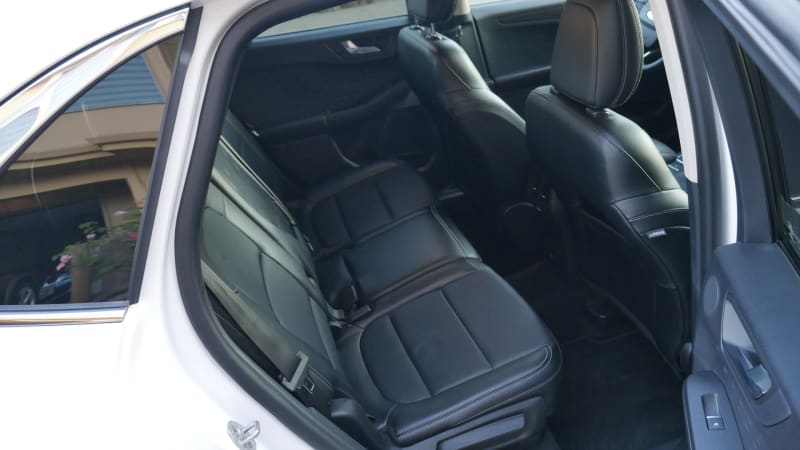 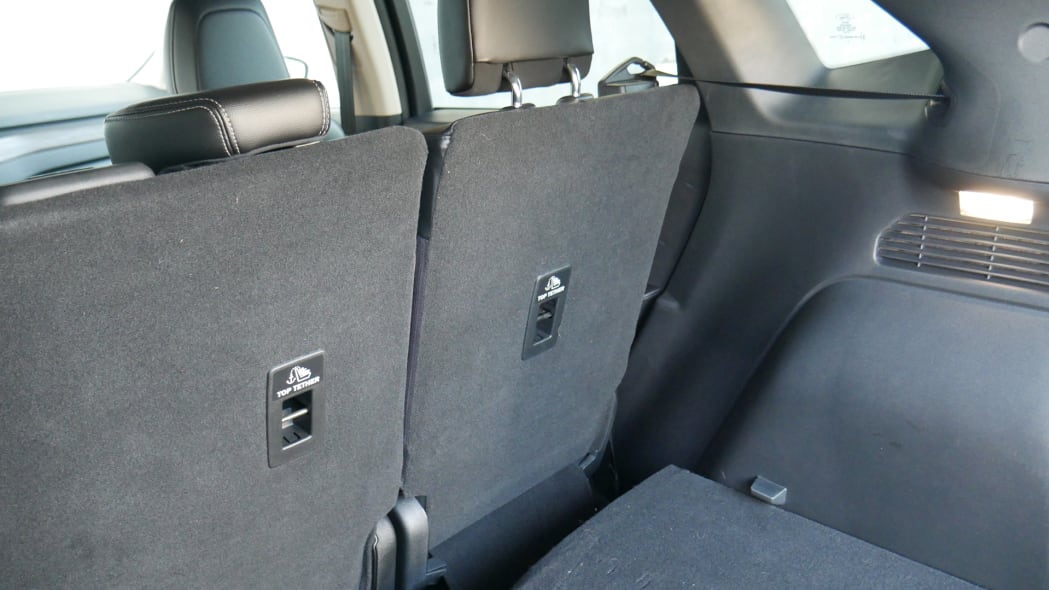 Here you can see how much is gained by sliding the seat fully forward and putting the reclining seatback upright.

And here’s how much of a difference it makes. 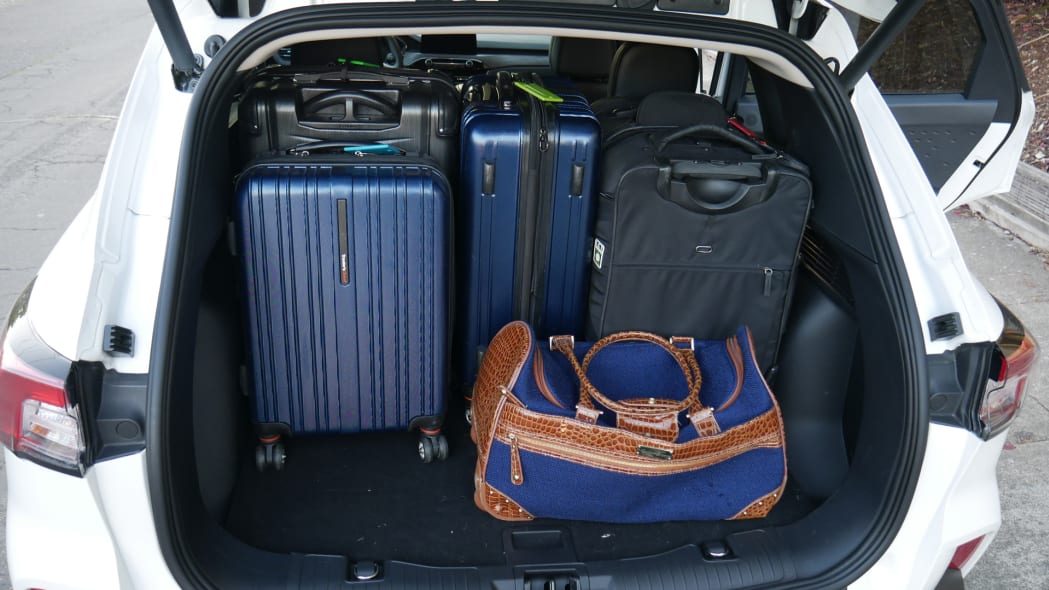 Basically, sliding the seats forward allowed me to put the roller bags upright while still retaining rear visibility. However, given that the fancy bag is sitting there by itself, there’s still clearly less space in the Escape when the seats are fully forward than there is in the CR-V with the seats locked in place (below). The RAV4 isn’t quite as good since it’s less boxy at the back. 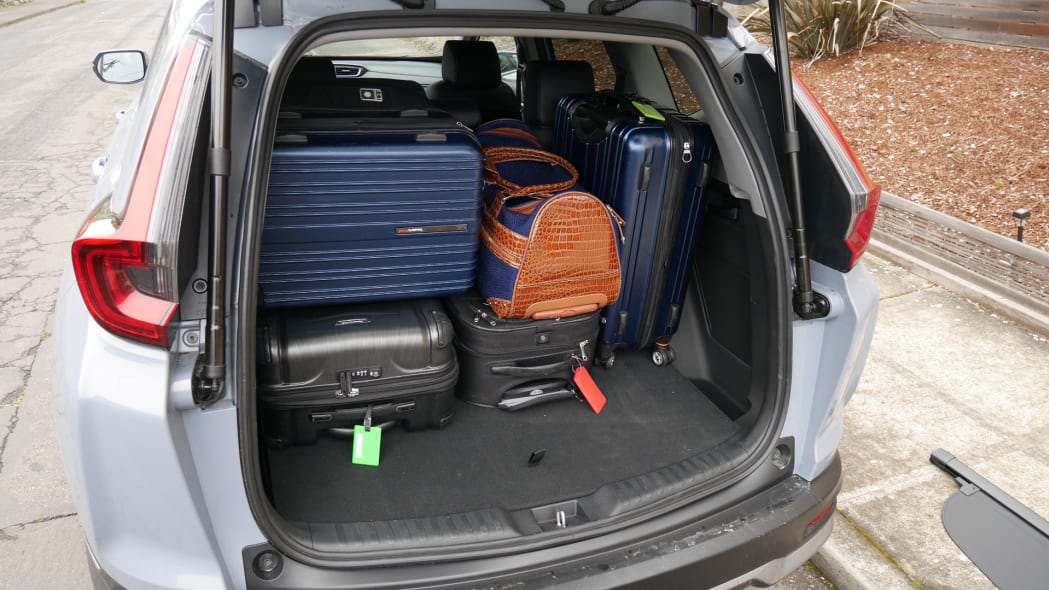 Now, to be completely fair, this mostly speaks to how ridiculously spacious the Honda CR-V is. It is literally exceptional, while the RAV4 is also better and bigger than most competitors. The Escape is perfectly and acceptably average for the segment, while offering the versatility of a sliding back seat that’s a rare feature in the segment.