Suzuki has officially launched the Toyota Corolla-based Swace hybrid estate car which has resulted from a manufacturing tie-up with its fellow Japanese brand.

Sales of the new model, which follows on from the Rav4-based ACROSS plug-in hybrid SUV unveiled back in July, are expected to get underway in Europe this winter and full details of UK specifications will be announced closer to the launch date.

The Swace will be built at Toyota’s Burnaston manufacturing plant, near Derby, and will feature the drivetrain from the lower-powered 1.8-litre Corolla hybrid, delivering a total output of 122PS and 142Nm of torque.

Suzuki’s initial performance data suggests that the car will be capable of reaching the benchmark 62mph in 11.1 seconds and a 112mph top speed while delivering CO2 emissions of between 99 and 115g/km on the WLTP test cycle.

While Suzuki has said that a “less-is-more” approach had been taken to the Swace’s cabin, it said that it would be equipped with an eight-inch infotainment system, featuring Bluetooth smarthphone connectivity along with Apple CarPlay Android Auto.

A Qi wireless charging pad will also be available in the front console, along with two USB terminals and an AUX terminal within easy reach of the driver and front passenger.

Other key features include heated front seats and steering wheel. 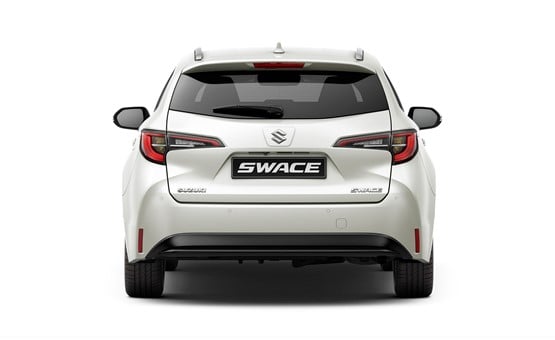 The Swace promises practicality too, with a 596-litre boot space.

Toyota and Suzuki announced back in March that they intended to further their plans to collaborate in new fields after resolving to pool their expertise to develop AFV and compact cars.

The first of the crop is the Toyota Rav4-based ACROSS, which is set to reach Suzuki showrooms this Autumn, with a British-built derivative of the Corolla also expected to follow at a later date.

Prices have yet to be released for either the ASCROSS or the Swace.