For most of its existence, the GMC Yukon has been a virtually identical twin to the Chevy Tahoe. It would have some exterior differences, maybe a couple of different features, but aside from the badging, you’d be hard-pressed to distinguish the two. That also applied to the supposedly more luxurious Denali trim level. This new generation of Yukon mostly continues the trend, but now the Denali stands out more. It gets a unique interior designed to bridge the gap between the Yukon and Cadillac Escalade, and includes high-end features such as the Yukon’s otherwise optional 6.2-liter V8 and magnetic suspension with air springs. All of this combined lets the 2021 GMC Yukon Denali live up to its luxurious reputation. It’s easily the version to get if your bank account allows.

It really is the interior that makes the biggest difference. The entire dashboard and door panels are exclusive to not only the Yukon, but the Denali trim level specifically. The dash design is more squared-off and truck-like, but it’s offset by the use of some excellent materials. Large portions of the dash are wrapped in leather with stitching. There’s also a large panel of matte-finish open-pore wood, available in multiple colors, on the passenger side. Some metal trim and nicely textured knobs adorn the center stack. The doors get this wood and leather, too. The center console features some attractive, stylized stitching as an extra adornment.

The result is a place that feels high-quality and luxurious, but not in a garish or flashy way. Sort of a utilitarian luxury, which fits the look and character of the Yukon Denali.

There are aspects of the interior that are shared with other Yukons and Tahoes, though. You get the same slightly odd but perfectly usable push-button shifter, the 10-inch touchscreen infotainment system, 15-inch head-up display, dual 12.6-inch backseat screens, and the same amount of interior space. These are all good things. The infotainment system is responsive and easy to use, while also offering the same advanced trailering camera system that so impressed in the Chevy Silverado HD. The head-up display is also large and legible, and fortunately not cluttered with too much distracting information.

The best part, however, is the amount of space. As we found in the 2021 Tahoe, there’s loads of room for a full-grown adult in the first and second rows, and while the third isn’t as spacious as the Ford Expedition’s, an adult can find enough space to be comfortable on moderately long trips. The only downside is the actual seat comfort: The seats range from needing a bit more support and softness up front, to being Kansas-flat and very firm in the way back.

As mentioned earlier, however, the Denali’s advantages extend beyond the cabin. It features the best of GM’s full-size SUV powertrain and chassis selection: the 6.2-liter V8 making 420 horsepower and 460 pound-feet of torque that offers significantly better acceleration than the standard 5.3-liter engine. Cruising up on-ramps is comfortable, and the engine itself is smooth and emits a gentle growl. The 10-speed automatic paired with it is also similarly smooth and unnoticeable. You do sacrifice a bit of fuel economy going to the 6.2-liter engine. With two-wheel drive, combined fuel economy is 17 mpg, 1 less than the two-wheel-drive 5.3-liter. The four-wheel-drive 6.2-liter Yukon’s fuel economy is 16 mpg, two less than the four-wheel-drive 5.3-liter. If fuel economy is a concern, you will be able to option your Denali with the 3.0-liter turbodiesel straight-six from the Sierra, which in those pickup trucks can get better than 30 mpg on the highway. But it will still be a few months before it’s available, and fuel economy numbers for the Yukon diesel haven’t been announced yet.

The real treat is the suspension, though. Besides finally making the switch to an independent rear suspension, GM offers three combinations of componentry: simple fixed steel spring and shock system (standard on Yukon SLE and SLT); magnetic shocks with steel springs (standard on Denali); and an air suspension paired with magnetic shocks (optional on Denali). This differs a bit from the Chevy Tahoe offerings, which includes an air suspension option without magnetic shocks. Still, we feel confident in saying that the magnetic and air combination is the best option for the Yukon. The ride quality is phenomenal, eliminating bumps and keeping the body very well controlled. It even helps eliminate a lot of the shudders and shakes that come from the body-on-frame construction (see our recent road test of the Ford Expedition King Ranch and the Chevy Tahoe Z71). 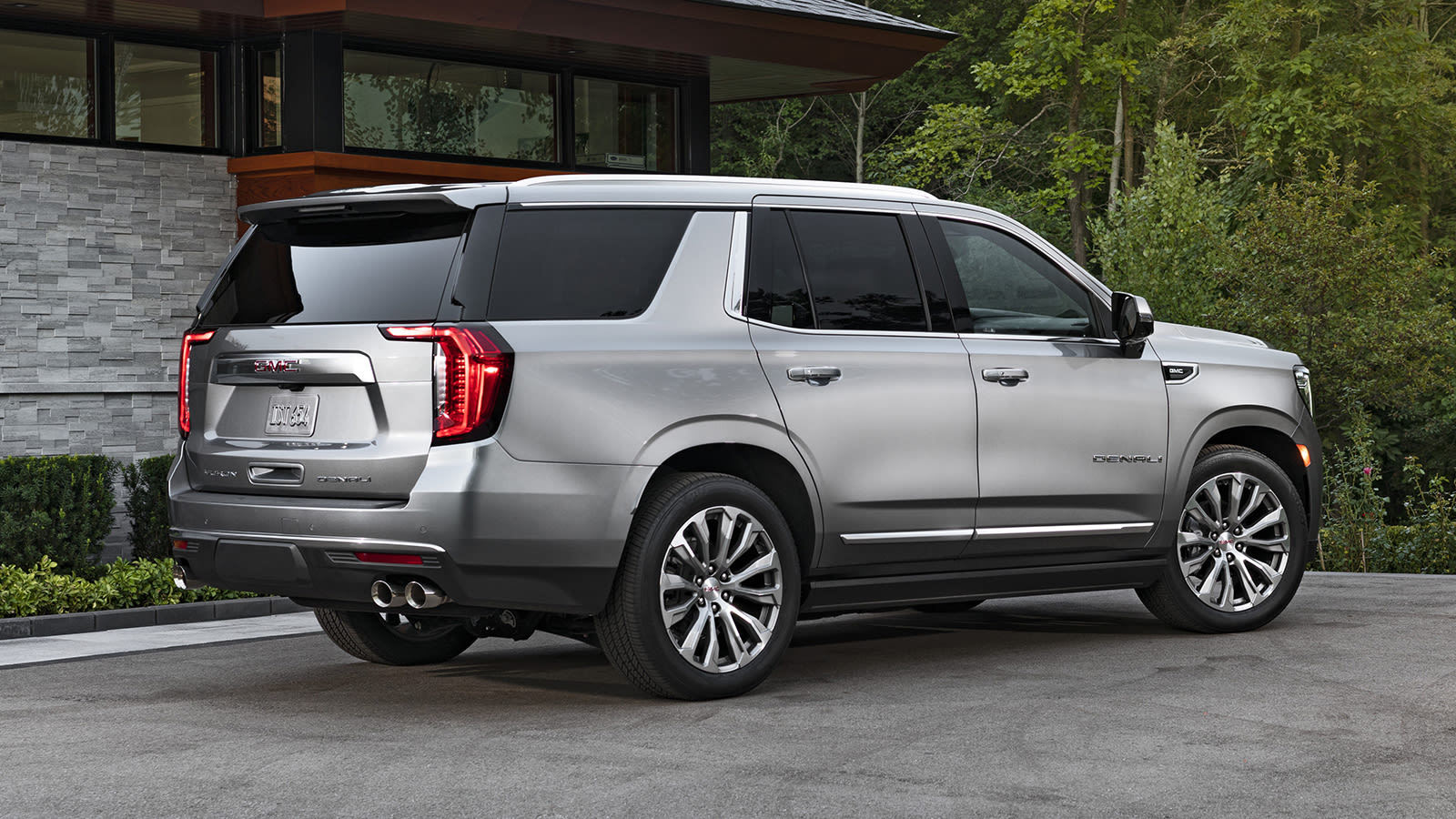 It also keeps body roll limited and complements the accurate, well-weighted steering. There are different drive modes, including a normal and sport function, but there’s little difference between the two. The sport mode has heavier steering and slightly firmer suspension. But regardless of setting, the Denali almost feels sporty, though its weight and height reign it in. And when the magnetic shocks are paired with the air springs, it can adjust the ride height. It can drop 2 inches for easy entry, and rise 2 inches for improved ground clearance at low speeds off-road.

Of course, being the top-of-the-line Yukon, the Denali carries the highest price. Base price for the two-wheel-drive model is $69,695, and four-wheel drive brings it up to $72,695. This pricing is very competitive with both the Chevy Tahoe High Country and the Ford Expedition Platinum. In fact, it’s actually more affordable than either, with the Tahoe High Country starting at $70,895 and the Expedition Platinum at $75,630. To further put this into perspective, the base 2021 Cadillac Escalade starts at $77,490 and the 2020 Lincoln Navigator starts at $76,185. All of these SUVs are very similarly equipped. You won’t find the expansive OLED displays from the Cadillac inside, nor the mid-century inspired design of the Lincoln. And with the Ford and Chevy, you get the same cabin design as a base trim level.

GMC is clearly serious about making its Denali products something genuinely special. This Yukon Denali has the nicest interior this side of those pure luxury SUVs: the Cadillac Escalade and Lincoln Navigator. It’s excellent to drive with good handling, a glassy-smooth ride, and silky powertrain. And it’s even a good value against the competition. If you’re looking for a big, luxurious SUV that isn’t as ostentatious as what the luxury brands sell, the Yukon Denali is your best bet.