Should you have a found a way to get past that schnoz, you’ve probably digested some of the basic specs for the all-new 2021 BMW M3 sedan and M4 coupe specs. They’re plenty impressive. There’s also, basically, two sets of them thanks to the regular and Competition versions that differ in engine output and transmission type.

But how do they compare to other ultra sport sedans and coupes? Well, we were wondering that too, so we fired up the Autoblog Comparison Spreadsheet Generator 5000 (aka me chained to my computer in a dark basement).

Sadly, there are surprisingly few competitors for the 2021 BMW M3. Rival sedans include the Mercedes-AMG C 63 and the Alfa Romeo Giulia Quadrifoglio, along with the Audi RS 5 Sportback sedan/coupe/hatchback thing. There’s no more Lexus IS F, the Cadillac CT4 Blackwing has yet to arrive and Jaguar doesn’t offer a spicy XE R.

Happily, there are more coupe rivals for the 2021 BMW M4, including the two-door versions of the AMG and Audi as well as the Lexus RC F. I also included the Ford Shelby GT350 and Chevrolet Camaro SS 1LE. On paper, they align incredibly well. On the street and on a track, I can personally attest that these Americans are fully capable of keeping up and/or bettering the fancy-pants luxury brands (and let’s not forget there are even more powerful, hardcore versions available). If they don’t align in terms of price or prestige, whatever.

OK, let’s get to the spreadsheet. Let’s start with the coupes and note that I didn’t bother listing the dimensions for the M4 Competition and C 63 S as they are identical to their “lesser” siblings.

I won’t bother burning words explaining what you can see on the chart. Instead, I’ll point out a few things that stood out to me.

First, BMW M comes awfully close to matching the output of AMG’s twin-turbo V8 despite having two fewer cylinders. Similarly, Audi manages to better the 0-60 time of the M4 Competition and tie the C 63 S despite being WAY down on power. It’s not like it weighs less. Magic?

Second, and speaking of 0-60 times, remember the importance that transmission and drivetrain make with them. It’s not just horsepower and torque. An automatic will be quicker and easier to launch than a manual, while all-wheel drive provides more instantaneous and beneficial grip. The Americans and M4 are therefore at a disadvantage on paper, but I’m quite confident there are those out there (myself included) who would happily trade a few ticks on a stopwatch for the added engagement of a manual transmission and rear-wheel drive. So kudos to BMW for offering the M3 and M4 au naturel.

Third, I’m pretty sure you can trash any argument that the Americans are big and fat muscle cars. Their exterior dimensions are basically the same apart from wheelbase, and they actually weigh less. The biggest difference is back seat room. Also, note how similar the Lexus is to the Americans as opposed to the Europeans.

OK, onto the sedans. 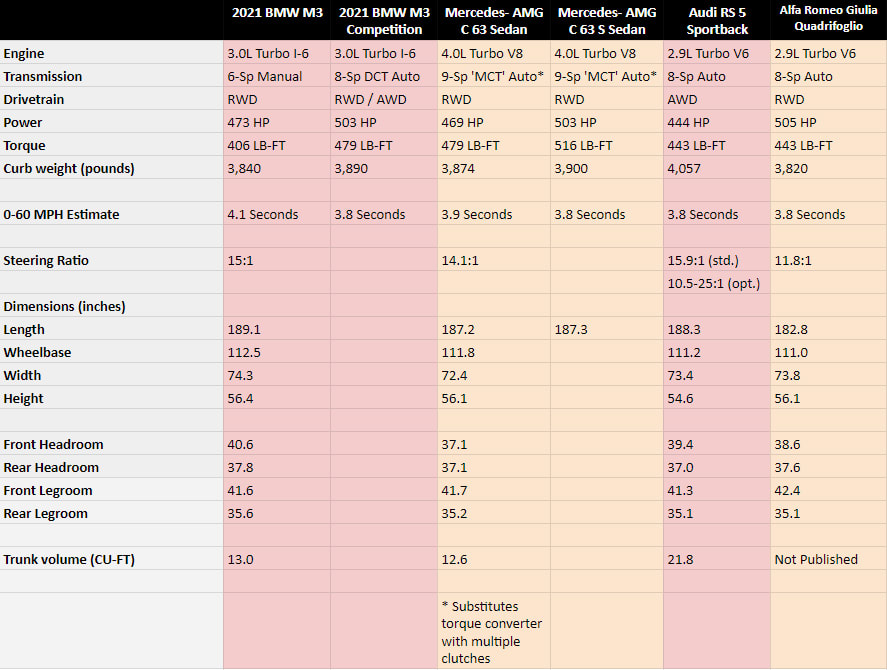 For the most part, the only difference here is the inclusion of the Alfa Romeo Giulia Quadrifoglio and its ridiculously long name. The first thing that pops out is that the Alfa, M3 Competition and C 63 S have basically the same horsepower and 0-60 times despite having considerably different torque numbers. BMW didn’t indicate what the eventual all-wheel-drive option will do to that 0-60 time, but one has to imagine it would go down.

Second, it’s pretty much always mentioned in Giulia reviews that it has incredibly quick steering. You notice it immediately behind the wheel and it’s awfully hard to miss on a spreadsheet, too. Nothing on either the sedan or coupe spreadsheets come close, apart from the optional variable rack offered on the Audi, but that’s a whole different thing.

So, that’s all I got. What sticks out to you? OK, besides the schnoz.