We have good news and bad news for those who happily find themselves in the market for a brand-new supercar. We’ll start with the good: The McLaren 765LT is even quicker than initially announced. According to the British automaker, the 765LT will run from 0-124 mph (a nice, round 200 kilometers per hour) in seven seconds flat.

Sure, that’s a scant 0.2 seconds quicker than previously claimed, but in the world of supercars, a couple of tenths is a major achievement. McLaren further claims a 0-60 time of 2.7 seconds and a 9.9-second quarter-mile time, which is impressive no matter which way you slice it. So is its 205-mph top speed, courtesy of a 755-horsepower twin-turbocharged 4.0-liter V8 engine.

Now for the bad news: If you haven’t already obtained a guaranteed order from McLaren, you’re out of luck. The automaker says it will produce 765 units for 2020, and they are fully allocated. 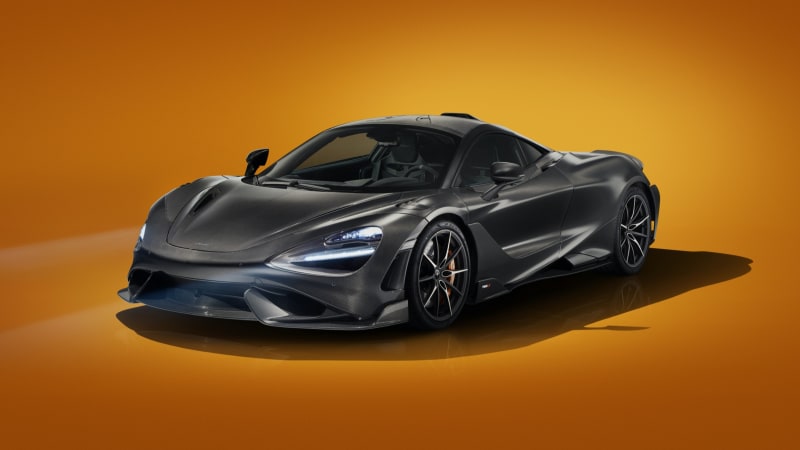 Along with those two nuggets, McLaren says it’s also showing off some MSO-customized examples of the 765LT to buyers. Two themes have so far been unveiled, the first of which is called Strata (above left). It’s “inspired by a city skyline and realized in a three-color design requiring 390 hours of hand painting and finishing,” the automaker says. The Azores orange, Memphis Red and Cherry black scheme carries on into the interior, as well.

The second theme is called GEOHEX and features Tarmac Black and Tokyo Cyan paint inspired by a 3D honeycomb. A large array of carbon fiber elements inside and out reportedly complete the look. Sadly, we don’t have pictures of this finish, but we’re sure those will eventually leak out.

Buyers who really love carbon fiber, though, may prefer the MSO Bespoke Carbon Fiber Body treatment (above right). One car has already been produced with a glossy finish, but McLaren says it can also tint the visual carbon with a number of colored finishes.