The Kia Sorento has always gone its own way. We’ll spare you a history lesson, but in short, Kia’s midsize crossover has never fit neatly into a same-sized competitive set. That continues for the all-new, fourth-generation 2021 Kia Sorento. It’s still a midsize crossover, it still has three rows of seats, but it’s still not as big as other three-row family crossovers, including Kia’s own Telluride. Not everyone needs that much space. At the same time, though, perhaps you might need more than the Honda CR-Vs and Toyota RAV4s of the world provide — plus a few extra seats. For many, the Sorento should make a lot of sense.

The biggest change for 2021, then, is the amount of variety the Sorento now offers. The new X-Line trim model is basically Kia’s answer to the Subaru Outback or perhaps a Toyota RAV4 Adventure. It gets an extra inch of ground clearance for a lofty 8.3 inches total, standard all-wheel drive with a locking center differential, more functional roof racks and different styling. It’s no rock crawler, but for weekend adventures, it should do the job nicely. All other trims get revised styling as well, with the SX in particular slathered in glossy black trim and wheels. It’s the interior that sees the bigger visual overhaul, plus an injection of the latest technology, but it’s hard to imagine Kia improving upon the Sorento’s already above-average interior quality.

There are huge changes under the hood. The base four-cylinder is bigger and a bit more powerful, while the old V6 engine upgrade gives way to a 2.5-liter turbo inline-four good for 281 horsepower and a robust 311 pound-feet of torque that smokes all those bigger three-row crossovers — including the Telluride. From there, things get green. The Sorento joins the Toyota Highlander and Ford Explorer as the only three-row hybrids, and betters them both with an estimated 37 miles per gallon combined. Then there’s the new Sorento Plug-In Hybrid, which is the only three-row plug-in hybrid SUV from a non-luxury brand. It can go 30 miles on a charge, which should be more than enough to run the day’s chores without the turbocharged gas engine firing up.

All of this makes for a compelling, diverse lineup. Whether you’re considering a smaller compact SUV or a bigger three-row family crossover, the new Sorento seems like a smart alternative to consider. We use “seems,” though, since we’ve yet to drive it. We’ll update this review when we get a chance behind the wheel. 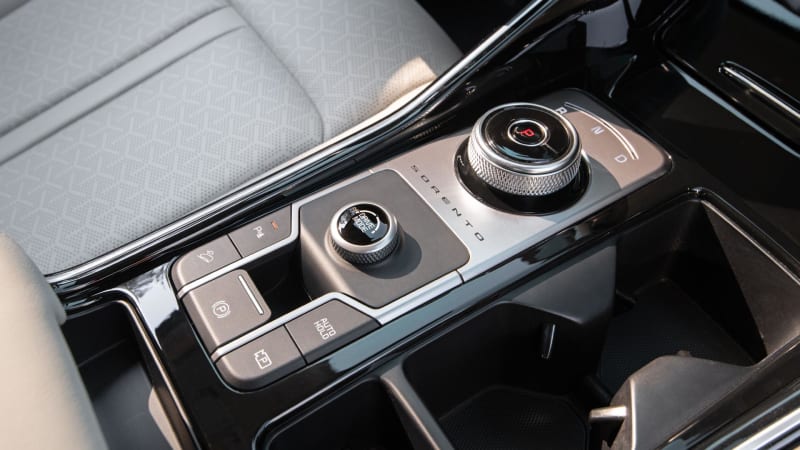 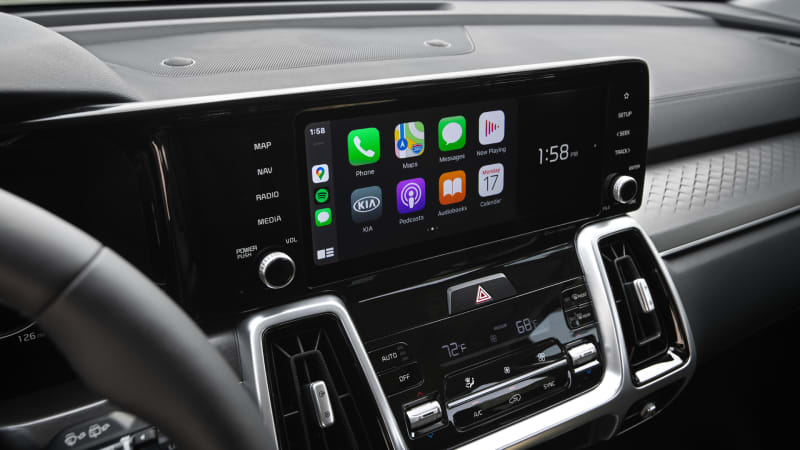 The Sorento’s interior was already a pretty nice place to spend time, so don’t expect a big uptick in materials quality. Instead, it looks more distinctive for 2021 without being a carbon copy of the Telluride (in general, we appreciate that Kia doesn’t subscribe to Russian Nesting Doll car design). The main difference between trim levels, besides features, is the strip of dash trim in front of the passenger and the fanciness of upholstery. Besides cloth or leather, the latter gets quilted leather on the SX. The hybrid models also get a rotary transmission selector (pictured above) instead of the traditional PRND stick.

Not surprisingly, technology is increased and upgraded for 2021. Upper trim levels get the most, of course, including a new 12.3-inch all-digital instrument panel and the same 10.25-inch touchscreen found in the Telluride. It’s incredibly user-friendly, feature-packed and one of our favorite interfaces on the market. The kids should appreciate that there are eight USB ports in all but the LX, which only has six. 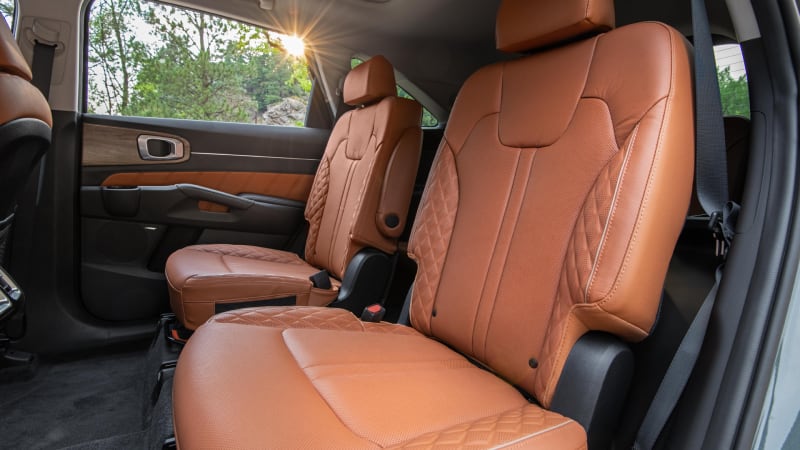 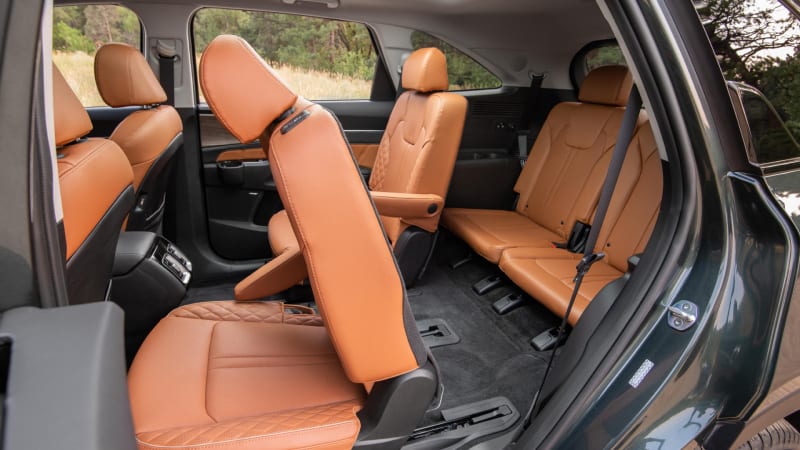 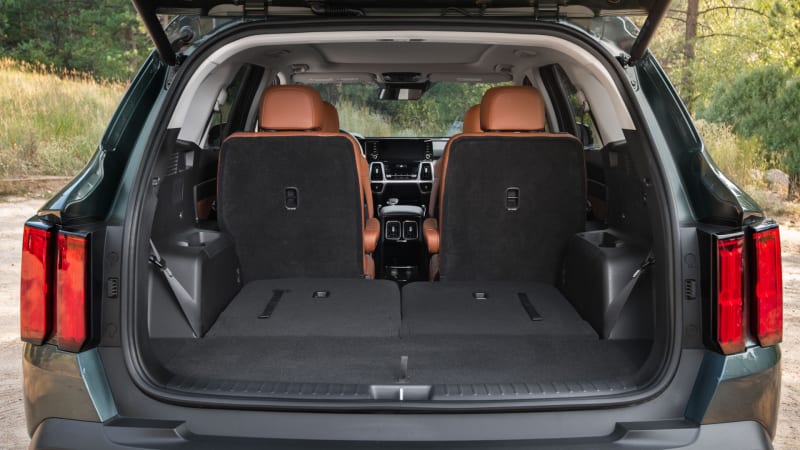 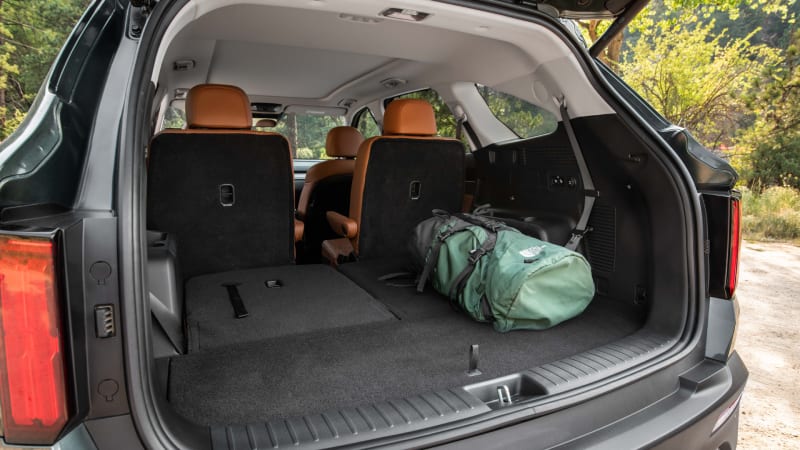 How big is the Sorento?

The Sorento has three rows of seats and is considered a midsize crossover, but it’s considerably smaller than other vehicles described as such. It’s 8 inches shorter in length than the Telluride and 4 inches narrower, which is significant. It also has nearly 2 fewer inches of third-row legroom and 3.1 fewer inches of middle-row shoulder room, two dimensions most likely to make a difference when loading up with people. All that said, the Telluride is one of the biggest vehicles in the segment, and the Sorento isn’t that far off the pace. It even has more third-row space than the Toyota Highlander.

Where it really seems to suffer is cargo space behind the raised third row. Its mere 12.6 cubic feet trails all those bigger three-rows considerably, and in terms of actual luggage, should only accommodate two medium-sized bags like this Cadillac XT6. Cargo space with the third-row lowered (38.4 cubic-feet) and all seats lowered (75.5) is roughly what you get in a Honda CR-V or Toyota RAV4.

What are the Sorento’s performance and fuel economy?

The 2021 Sorento LX and S trim levels come standard with a 2.5-liter inline-four that produces 191 horsepower and 182 pound-feet of torque. This is comparable to what you’d find under the hoods of compact SUVs like the CR-V and RAV4. A traditional eight-speed automatic and front-wheel drive are standard, with all-wheel drive an option. Kia says this engine will get the Sorento from 0-62 mph (100 km/h) in 9.5 seconds, which is slower than the CR-V and RAV4, and indicative of the Sorento’s greater weight. Fuel economy is estimated to be 24 mpg city, 29 mpg highway and 26 mpg combined with FWD and 23/25/24 with AWD.

Opting for the EX or SX is therefore a good idea as they bring with them a 2.5-liter turbocharged inline-four good 281 hp and 311 lb-ft of torque — which exceeds bigger three-row SUVs. Its 0-62 time is 7.4 seconds, which is more competitive but hardly eye-popping given the available power. Front-wheel drive is standard. All-wheel drive is optional on the EX and SX, not available on the SX Prestige and standard on SX X-Line. An eight-speed dual-clutch transmission is also standard. Fuel economy is 22/29/25 with FWD and 21/28/24 with AWD. That’s also better than those bigger three-row SUVs.

The Sorento Hybrid (pictured in the above gallery) pairs a 1.6-liter turbo inline-four with an electric motor for a total system output of 227 hp in the Hybrid S and 228 hp in Hybrid EX. Front-wheel drive is standard, and unlike the Toyota Highlander Hybrid, you can’t get all-wheel drive. Fuel economy estimates are exceptional at 39 mpg city, 35 mpg highway and 37 mpg combined.

The Sorento Plug-In Hybrid adds a bigger battery and electric motor to the same turbo engine, increasing output to 261 hp and providing an all-electric range of 30 miles. That should easily make it the most efficient three-row crossover.

We have yet to drive the 2021 Kia Sorento, but will update this section when we do. 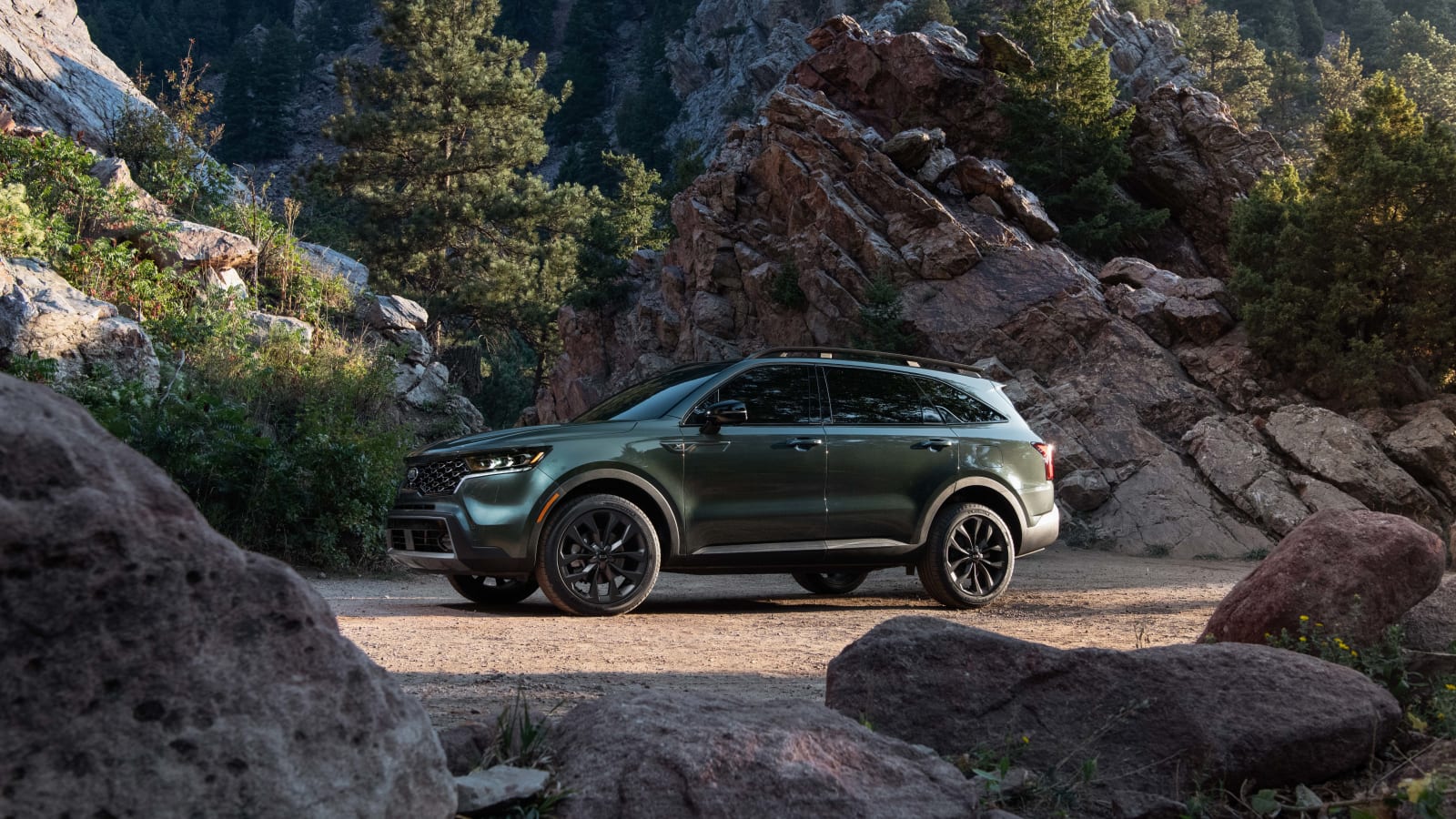 Pricing for the 2021 Sorento had not been announced at the time of this writing. We would expect it be a little more expensive than the current model that starts at $28,110.

There are six trim levels for the non-hybrid models. The LX 2.5, S 2.5, EX 2.5T, SX 2.5T, SX Prestige 2.5T and SX Prestige X-Line 2.5T. The latter is distinctive for having an extra inch of ground clearance, more functional roof rails, more rugged styling and standard all-wheel drive. It is pictured above.

We don’t know the pricing yet, but the S and EX sure seem like the more appealing choices. They add 18-inch wheels, gloss-black exterior trim, roof rails, proximity entry, dual-zone climate control, an eight-way power driver seat, simulated leather upholstery, heated front seats, a leather upholstery, in-car Wi-Fi, satellite radio, and eight USB ports. The EX really only differs by adding the turbo engine and second-row captain’s chairs that reduce their seating capacity to six. The SX trims have those, too, but slather on additional luxury niceties.

The Hybrid is only available in S and EX trim levels, and comes standard with the captain’s chairs. It doesn’t seem like the SX’s added luxuries are available. We don’t yet know the plug-in hybrid’s feature content.

We will provide a full breakdown of features when pricing is announced at a later date.

What are Sorento’s safety equipment and crash ratings?

The 2021 Sorento has yet to be crash tested by a third party.