Audi’s post-Dieselgate electrification push gains a second prong for 2021 in the form of the E-Tron Sportback. If you couldn’t tell from the name alone, the Audi E-Tron Sportback expands the company’s new electric crossover into the sporty, slope-backed crossover space.

As is typically the case with these crossover off-shoots, the Sportback shares its underpinnings with the old-fashioned (can we even call it that yet?) Audi E-Tron, which now benefits from the same tweaked powertrain that was announced with the Sportback’s unveiling, comprising a 95-kWh battery pack and dual (front/rear) electric motors producing a total of 355 horsepower and 414 pound-feet of torque. Those figures increase to 402 hp and 490 lb-ft in the E-Tron’s “Boost Mode,” which can propel the midsize crossover to 60 mph in 5.5 seconds. That’s plenty quick for a conventional car in this segment, and not bad for its weight, but it’s not exactly eye-opening performance for a modern EV. But we digress.

Choosing between the E-Tron SUV and Sportback comes down to style, and to our eyes, the latter actually has the edge. This would make it the rare exception in a world of sawed-off SUV “coupes” that often end up looking about as awkward as their positions suggest while compromising the very practicality that makes them attractive in the first place. Audi, at least, seems to know how to make a fastback style crossover that doesn’t look like a cynical attempt to fill a narrow niche. It looks like an A5 Sportback with a lift and some cladding. One could do far worse. 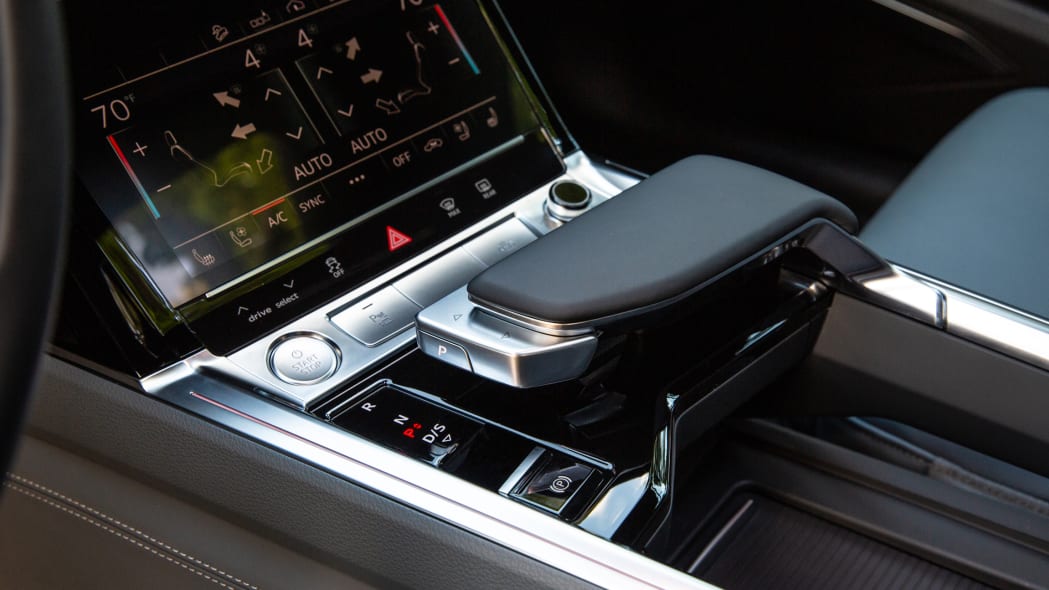 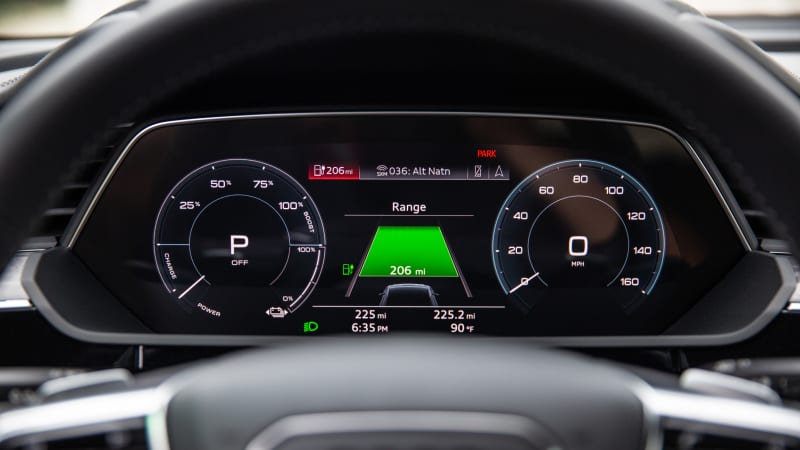 Inside, the Sportback is all Audi. Indeed, apart from its center console and unique gear selector, you’d be forgiven for mistaking the E-Tron for an A6, Q8 or half the other cars in Audi’s lineup. As an added bonus, the mount that houses the unique, thumb-activated gear selector doubles as a cushion for your wrist when you operate the lower control screen. This is actually an upgrade over what you’ll find in Audi’s gasoline-powered models, where you run the risk of nudging the shifter if you’re using it as a wrist rest. Kudos to Audi on that detail.

This business-as-usual interior theme speaks to the fact that Audi has fully embraced the proliferation of touchscreens and other touch-based surfaces with its latest round of cars and SUVs. Audi doesn’t really put the E-Tron’s all-electric identity front and center. Rather than plastering the interior and touchscreen menus with green (though they’d probably be blue, because that’s the European way) elements or animated foliage, Audi has skinned every element of the E-Tron in such a way that if you didn’t know what it was underneath, you’d remain clueless until getting underway.

To test the E-Tron’s capability as an EV, our 60-mile loop consisted of several miles of high-speed Interstate, suburban surface streets and rural back roads. We set off with the dash showing 212 miles of available range after we set up our individual profiles for the Sportback’s drive mode and driver assistance systems, which requires some menu-diving.

The instant torque from the big Sportback’s electric motors makes for incredibly satisfying launches and blink-of-an-eye passing power. The powertrain is absolutely the E-Tron’s party piece, and its responsiveness becomes addictive. Boost Mode or no Boost Mode, the Sportback packs a heck of a punch. 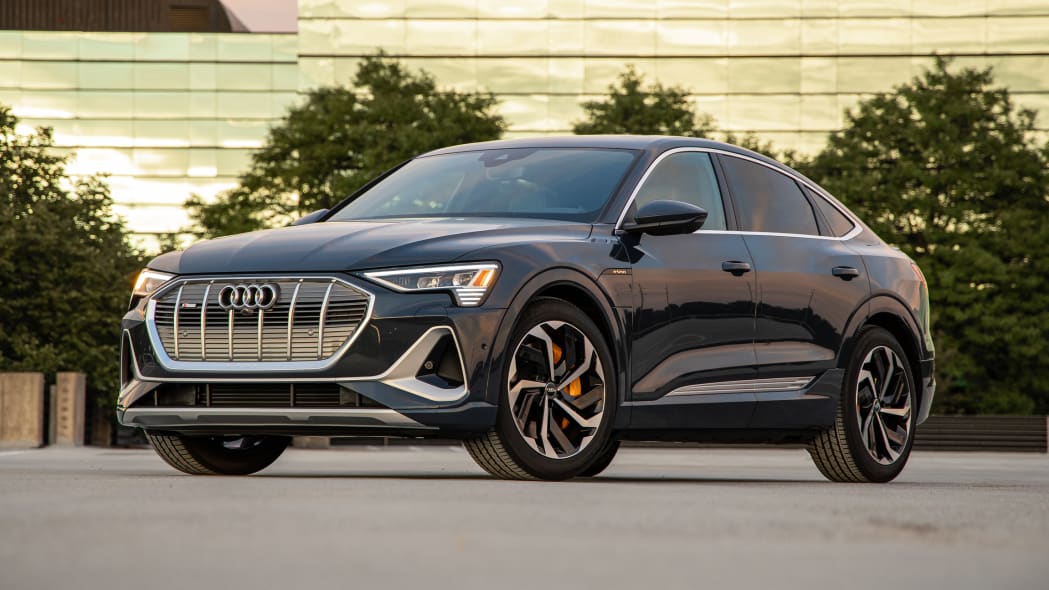 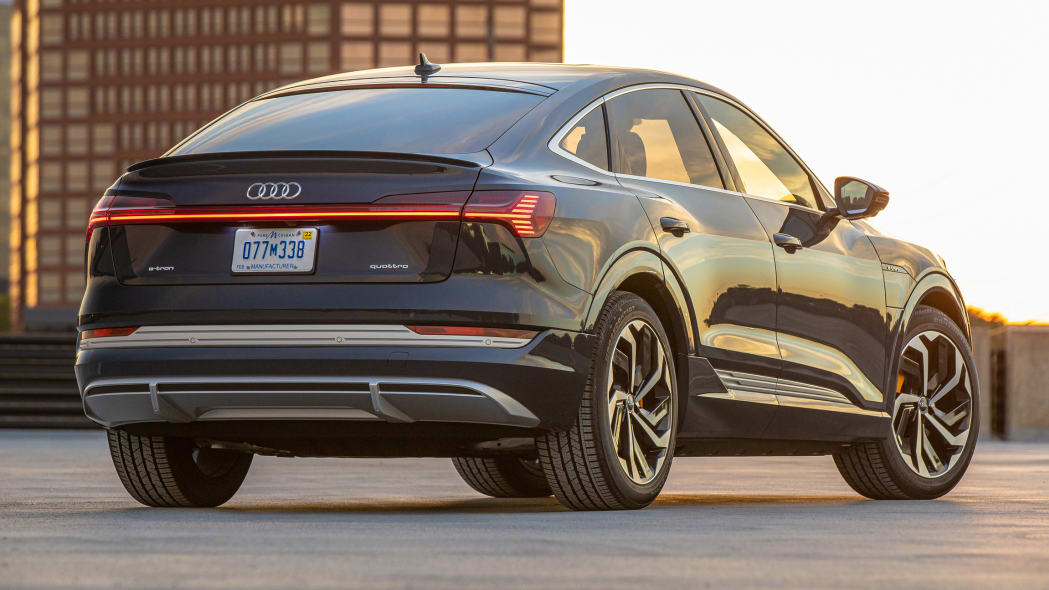 And it needs to. Despite the E-Tron’s low center of gravity (a product of its low-mounted battery pack), it still feels as hefty as the specs say it is. At 193 inches long, and 76 inches wide, the Sportback has almost the exact same footprint as an A6 Allroad (4,486 pounds) or Q8 (5,004 lbs), but is significantly heavier than either, checking in at 5,754 lbs empty. That trend continues relative to its competition: a Jaguar I-Pace (which will hit 60 mph a full second quicker) weighs 1,000 pounds less. Even the larger, three-row Tesla Model X is 300 pounds lighter.

The good news is that the electric driveline keeps quite a bit of weight off the nose (relative to Audi’s gasoline-powered offerings, certainly) and the E-Tron’s steering has been tuned for a quick, almost too-crisp response. Still, the Sportback rides like a luxury SUV first and foremost. It’s soft, supple and serene, not a corner-carving performance SUV. Even on the bombed-out surface streets of the Detroit metro area, the Sportback’s firmest suspension setting was perfectly comfortable.

After completing our loop, which ended up being just 58.5 miles, the Sportback’s cluster showed us an estimated remaining range of 172 miles – almost 20 more than we expected. At highway speeds, our consumption rate averaged close to 2.2 miles/kWh. By the time we wrapped, that figure was up to 2.8. At that pace, we could theoretically extract more than 240 miles from the E-Tron, assuming Audi’s 91-percent battery utilization figure is accurate. While this was far from an exhaustive evaluation of the E-Tron’s battery capacity, we nonetheless came away impressed, and convinced that Audi’s 218-mile range figure is well on the conservative side. The “your mileage may vary” caveat applies, as usual.

Now, if you’re a fan of EVs, you’re probably familiar with the notion of being able to adjust a car’s brake regeneration level, typically with the end goal being one-pedal driving. While the E-Tron allows you to fiddle with the regen incrementally via its wheel-mounted paddles, the adjustment range is fairly narrow and the E-Tron will eventually discard your selections. One-pedal driving isn’t possible and we miss it. We also can see existing EV owners giving the E-Tron a pass because of its omission – once you’ve driven in stop-and-go traffic while rarely touching the brake pedal, it’s hard to go back. 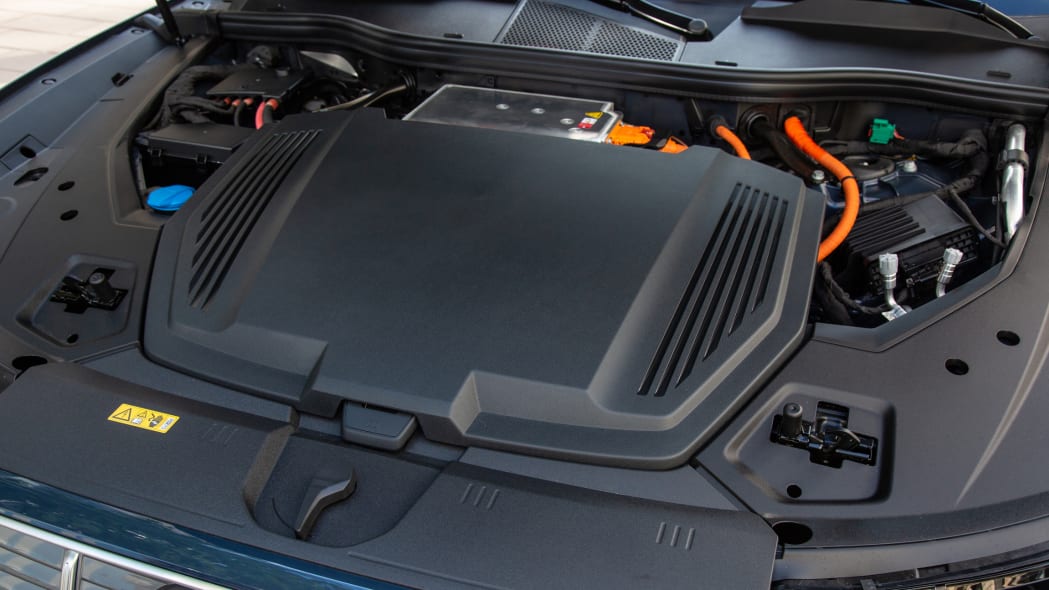 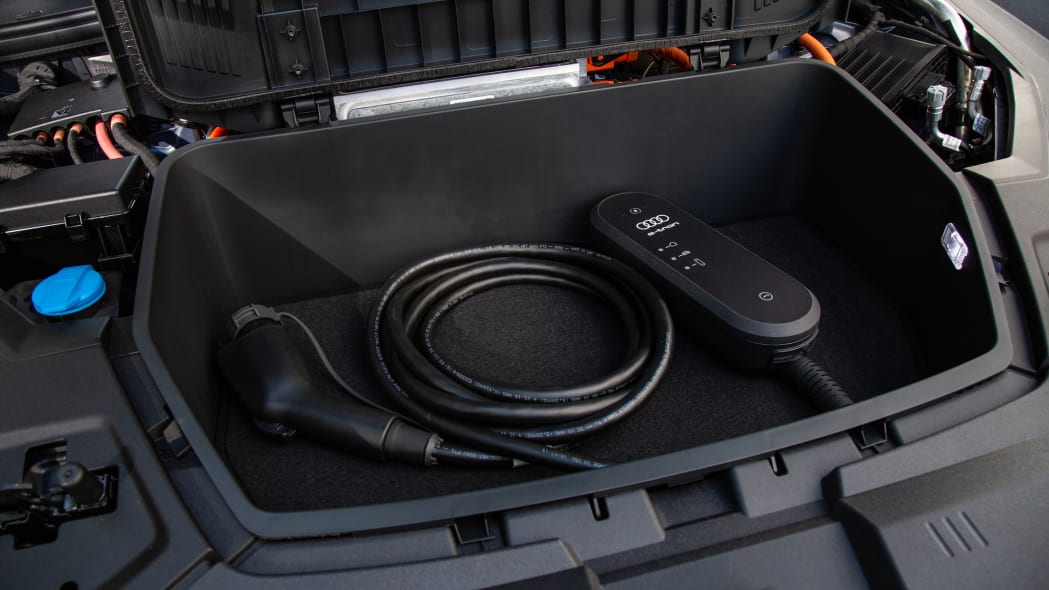 The Sportback’s front storage cubby is another head-scratcher. Too tiny and inaccessible to earn the title of “frunk,” this briefcase-sized tub under the hood has enough space to accommodate the E-Tron’s charging cable and virtually nothing more. Fortunately, the rear cargo space is relatively generous at 27.2 cubic feet – down merely 1.3 cubes from the regular E-Tron and better than the Jaguar I-Pace’s 25.3 cubic feet, which also has a near-useless cargo space under its hood.

On paper, the E-Tron compares reasonably well to its European competitors. Both the I-Pace and the forthcoming Mercedes-Benz EQC offer similar range at (likely, in the case of the Benz) the same price, but its heft holds it back in terms of performance.  For the same money, you can also load a Tesla Model Y Performance to the gills and both outrun and outlast the Europeans – though you would be sacrificing build quality and interior luxury.

The situation is, frankly, not entirely satisfying. As an Audi, the E-Tron Sportback seems quite good. It is quiet, comfortable and feature-rich, as a $70,000 luxury car should be. This may well be enough to bring Audi’s fans back into showrooms, but will it grow the customer base? For now, it seems that E-Tron is more likely to bring existing Audi customers into the electric fold, rather than bringing outside electric buyers into the Audi fold.