Of all the motorcycle types on the road — sportbikes, cruisers and every oddball in between — the naked literbike might be the most outrageous. Endowed with massive, superbike-derived 1,000cc+ engines and minimal bodywork, these are the two-wheeled equivalent of a convertible hypercar, offering high-speed thrills at the expense of practicality.

The 2020 KTM 1290 Super Duke R is the Austrian alternative to the likes of the Aprilia Tuono V4 1100, BMW S 1000 R, and Ducati Streetfighter V4. The Austrian brand built its name on durable, Dakar-worthy dirt and trail bikes, and the Super Duke premiered in 2014 as an edgy alternative to premium players from Germany, Italy, and Japan. The 2020 model adds more power, lighter weight, revised chassis and suspension, and tuning intended to make it more manageable for everyday riding — less track tool, more street weapon.

Packed between the rider’s legs is a 1,301cc V-twin that churns 180 horsepower and 103 pound-feet of torque, linked to a six-speed gearbox with a quickshifter that enables clutch-free cog swaps. Feeding the powerplant is a ram-air intake that channels air between the LED headlamps, forming an insect-like beak up front. Though the jagged bodywork is visually unwelcoming, relatively high handlebars and a fairly well-cushioned seat make for relatively comfortable ergonomics. Unlike aggressively configured superbikes, this upright seating position enables longer stints in the saddle. However, the lack of wind protection from a fairing or windscreen means the rider is also faced with a fair amount of noise and buffeting. 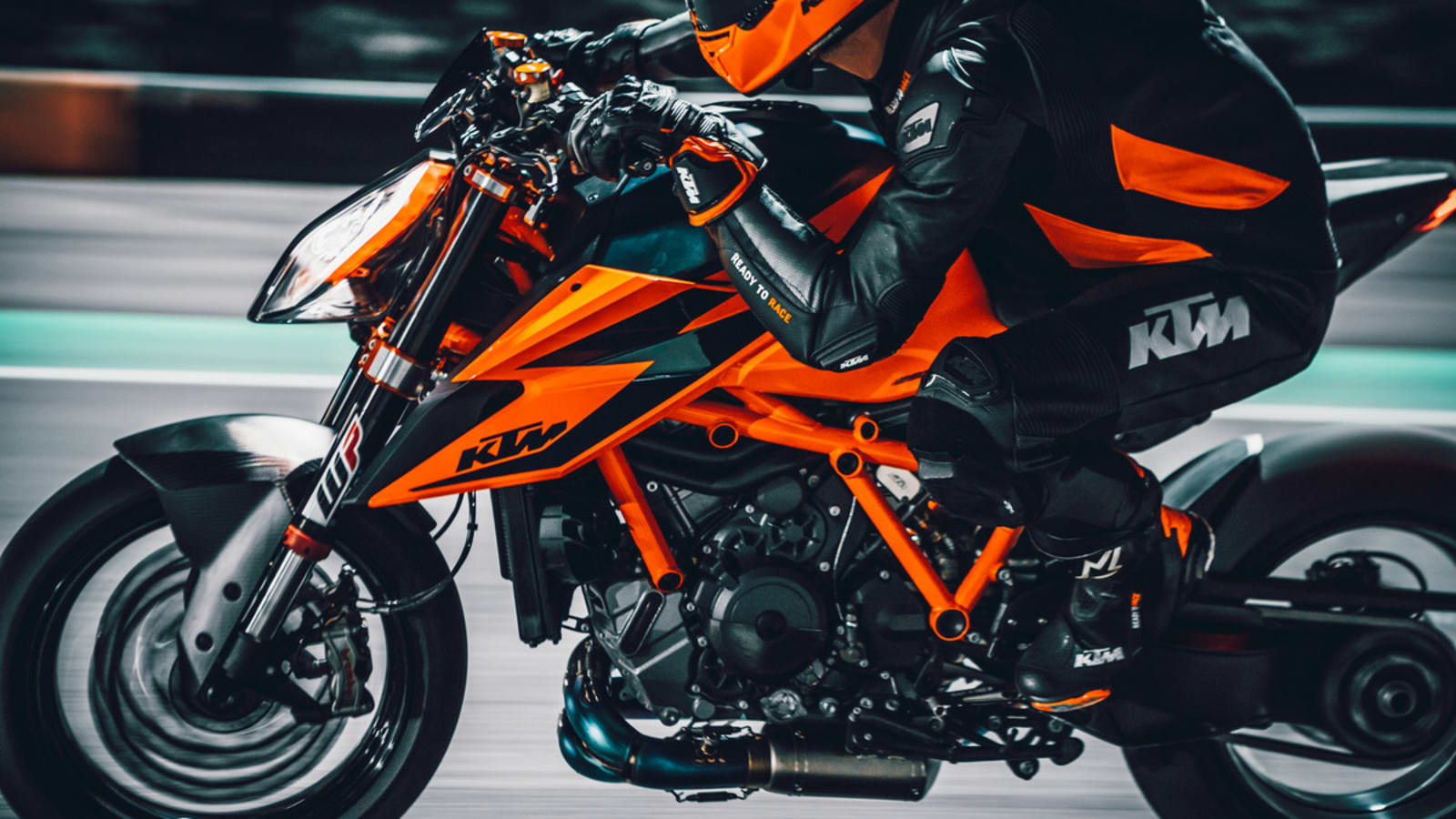 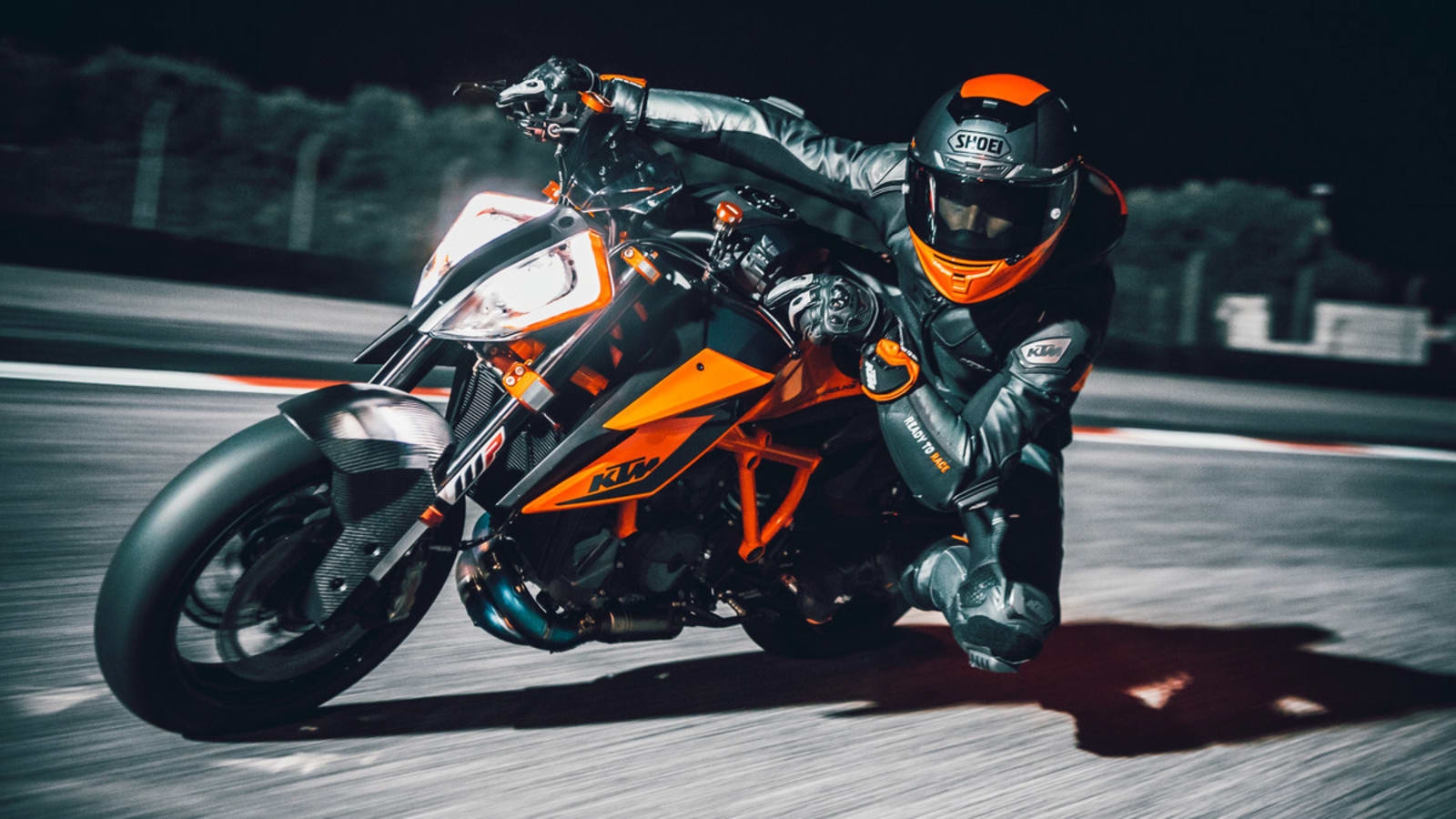 Saddle up on the 32.9-inch tall seat and you’ll first notice the new 5-inch digital display front and center, offering a bright, clear graphics package with myriad sub-menus managing engine power, throttle response, wheelie control, and the like. The wireless key fob also unlocks the steering lock and gas cap, and enables key-free startups. While the graphical interface isn’t nearly as slick as, say, Ducati’s Audi-influenced system, the KTM’s logical menu structure makes it easy to manage the bike’s settings via up/down/right/left buttons on the left handgrip. If you’re accustomed to the conventional switchgear you’d find on mainstream bikes, KTM’s sharp-edged buttons and switches might seem a bit too slavishly designed to match the angular bodywork. Though they are logically laid-out, their shape seems designed for design’s sake, not functionality. I had some trouble resetting the turn signal button, which seemed sticky on my tester, and a follow-up with KTM didn’t shed any further light on the anomaly. The redesigned switchgear does include nifty thumb/forefinger paddles that adjust the traction control for variable wheel slip, which is part of the optional Track Pack. The $300 package also enables rear ABS and wheelie control to be disabled.

You’ll want to select your ride mode carefully: picking the setting via the on-screen menu has a remarkable effect on the riding experience. Unlike modes in a car, which usually yields a subtly different feeling behind the wheel, the Super Duke’s adjustable throttle response and traction control transforms from a mild-mannered ride in Rain mode to a shockingly powerful, sharp-edged weapon when equipped with the $300 Track Pack. Between the extremes are Street and Sport modes, which feel tractable and easy to manage under light throttle, but increasingly exciting as you dip into the big twin-cylinder’s powerband.

There’s a feeling of substance and precision from the Super Duke R’s saddle, as well there should be considering its $18,699 starting price. And unlike its prime competitor, the surprisingly refined Ducati Streetfighter V4, the KTM’s large motor can feel absolutely unhinged when triggered in Race mode. Yank the throttle and the surge of power is downright startling: you’d better hang on to those grips, or this rascally sucker could get away from you with its instantaneous throttle response and grunty, gratifying torque. With wheelie control disabled, the front wheel also levitates easily from the sheer strength of the motor. Accompanying the experience is a strong pulse of engine vibrations through the pegs and bars throughout the lower half of the powerband, conveying the impression that this is still a very mechanical machine, not a long-distance machine masquerading as a sportbike. 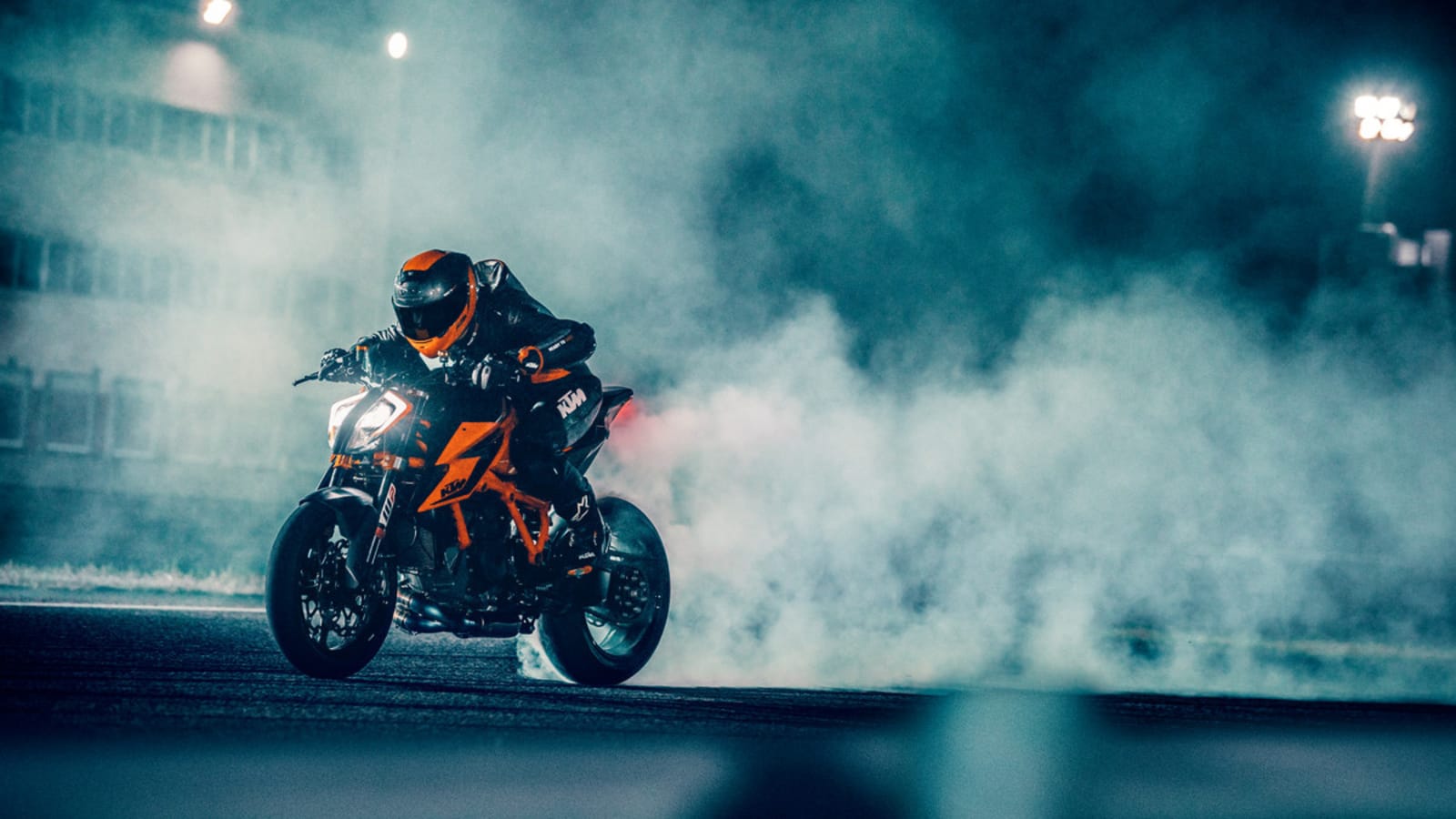 Though more refined for 2020, the Super Duke R is still very much a raw, immediate motorcycle that stays true to the all-or-nothing naked superbike format. Spend a full day aboard and it’s easy to grow accustomed to the KTM’s oversized personality, composed ride, and sharp handling. There’s never a shortage of passing power, the clutch-free rev-matched downshifts and seamless upshifts make it easy to tap into the robustness of the engine’s mid-range, and the saddle offers a fairly comfortable place from which to gobble up the miles, at least relative to the bike’s otherwise stripped-down setup. Crave a more refined ride? BMW’s inline-4-powered S1000R ($14,045) and Ducati’s V4-powered Streetfighter ($19,995) will ease you into longer stints in the saddle. The V4-powered Aprilia Tuono V4 1100 RR ($15,499) splits the difference in refinement, while the inline-3-powered Triumph Speed Triple RS ($16,500) offers yet another charismatic option from across the pond.

While nobody needs a boggling fast motorcycle, bikes like the Super Duke R remain reassuring reminders that bold, unfiltered speed machines that can plaster a smile behind a helmet still exist. It may not be your ideal only bike, but if you have the luxury to splurge on a speed machine dedicated to charismatic motoring, the KTM Super Duke R satisfies that very specific need in spades.