The Cadillac CT5 is a midsize luxury sedan. At least by today’s standards. By the standards of Cadillac’s past, it’s practically a compact. At 193.8 inches long, the CT5 is 3 inches shorter than its STS predecessor of 15 years ago and 11 inches shorter than the Seville of 25 years ago. This is significant since virtually every other car brand’s offerings have grown from generation-to-generation. See the BMW 5 Series as just one example. You’d have to go back to the 1980s to find a CT5 ancestor that’s smaller, though that stubby thing was an aberration.

Honestly, I’m just sharing that because I think it’s interesting. This post is about trunk space, and exterior size doesn’t necessarily equate to how much junk you can fit in the trunk. In fact, the CT5 is pretty good example of that. Although smaller than its predecessors, the CT5 is still an awfully big car that’s comparable to other midsize luxury sedans, including the 5 Series, Audi A6 and Mercedes-Benz E-Class. The trunk, however, is notably smaller than what you’d get in those with a rather rinky-dink 11.9 cubic feet. That’s coupe territory and less than what you’d get in some subcompact sedans. The A6 and E-Class are in the 13-cube range, while the 5 Series apparently has 14.5 cubic feet.

Although plenty wide at the rear, which should be handy for golf clubs, the CT5’s trunk isn’t very long compared to all those competitors. The A6’s is narrower but also practically a tunnel by comparison.

Also, note the ramp-like structures along the outer edges. Besides making loading a hassle, they effectively make the trunk even smaller than the 11.4 cubic-feet that’s technically there since it’s so difficult to load items right up to the wheel wells. 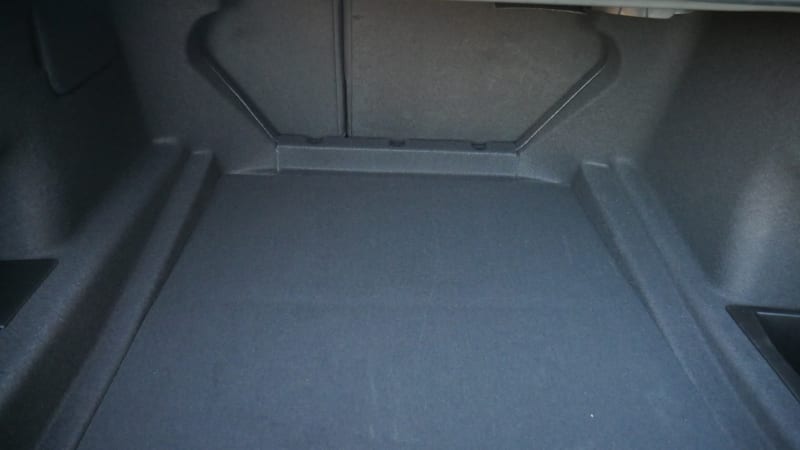 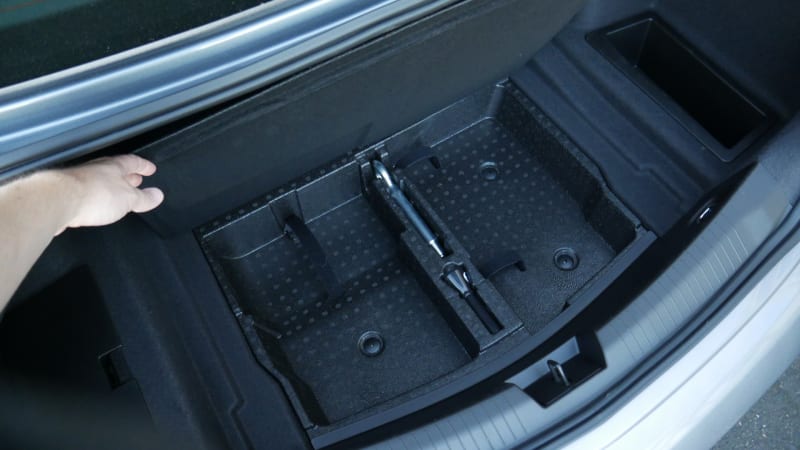 You can see a closer look at those “ramps” above left along with the smallish pass through that oddly looks like a previous-generation Hyundai Sonata’s grille.

Above right you can see the underfloor storage. There is no spare tire. 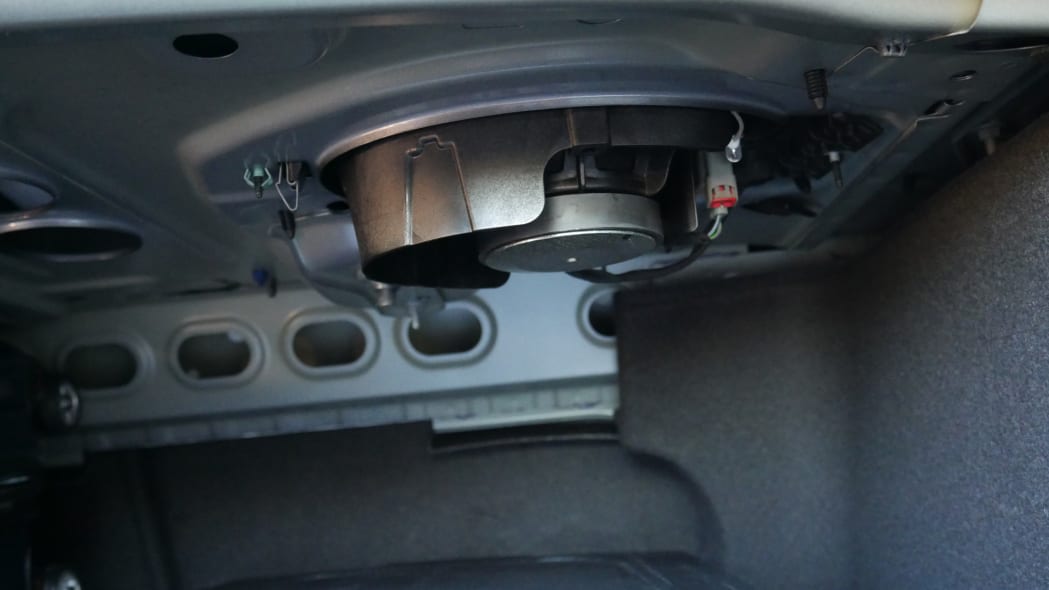 Besides those “ramps” impeding luggage loading from below, these giant speakers hanging down from the parcel shelf sure don’t help, either. Watch your hands while loading, as well as anything that might be easily scratched (or that might damage the speakers) 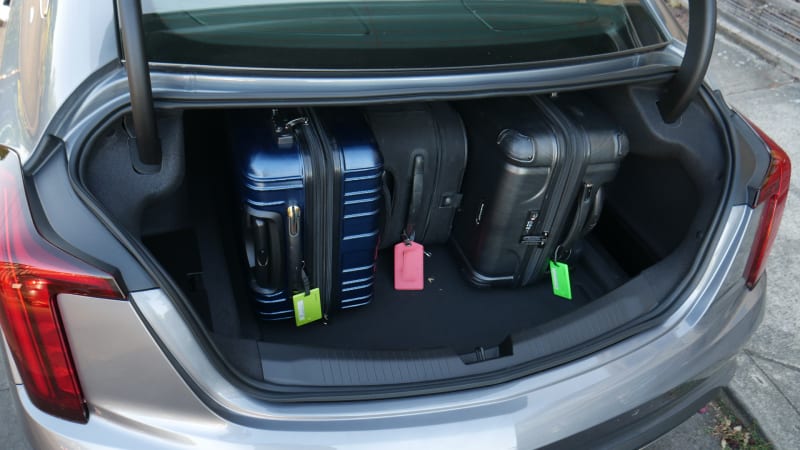 To show the limited width, I barely managed to squeeze in the two biggest bags and one of the medium-sized rollers. For a point of comparison, I can fit a whole other bag into most midsize, non-luxury sedans like the Toyota Camry, Hyundai Sonata and Honda Accord. You can already tell that there’s not much room left over. 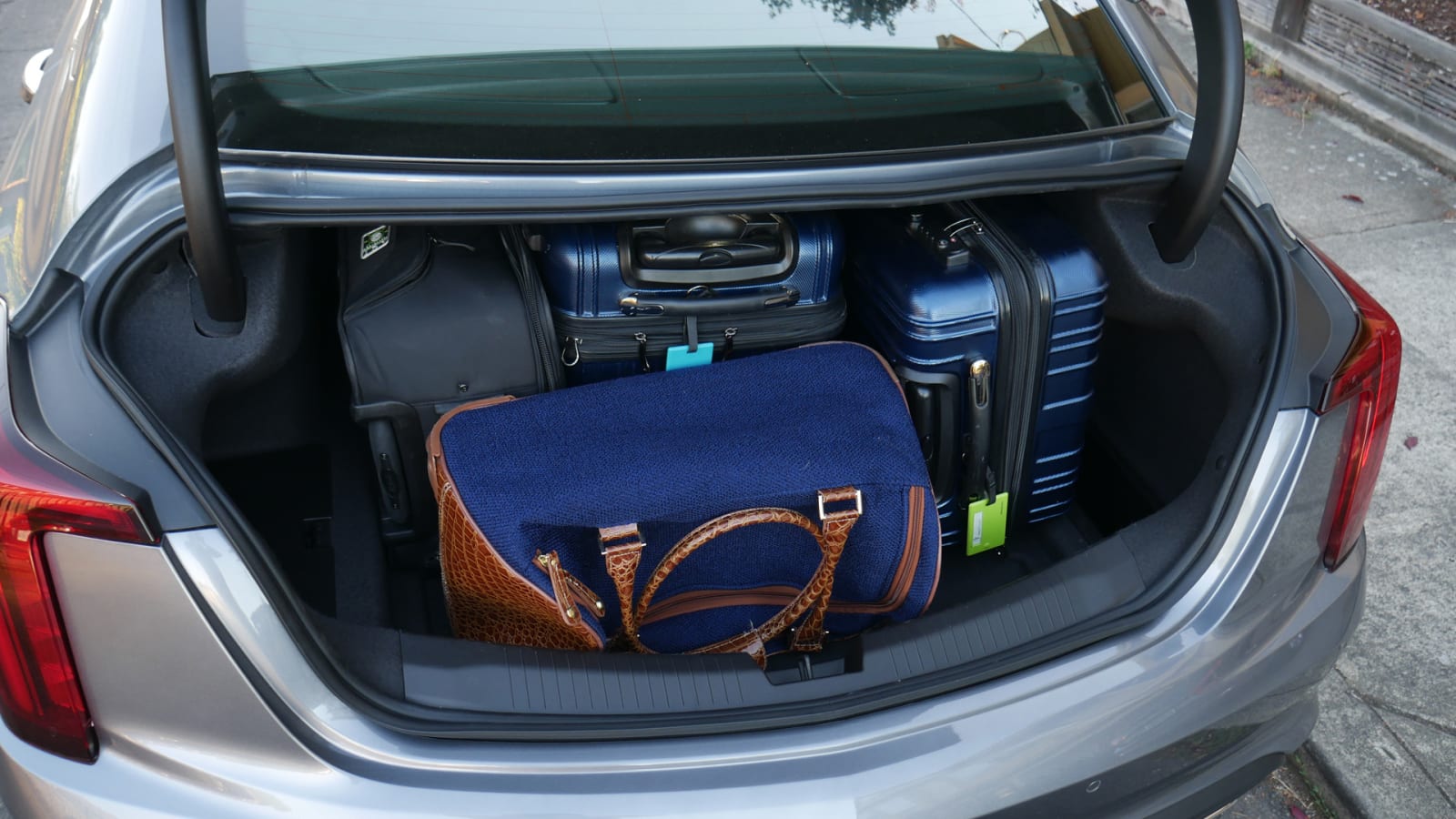 This is the best I can do. This is everything but the biggest roller bag. There is some room left over, but not enough for anything larger than a grocery bag.

Basically, the 11.4 number certainly shakes out. The CT5 does indeed have less luggage-carrying capability than cars that are much smaller on the outside, including the BMW 3 Series.