Portland is the only city in the continental United States with a volcano within its city limits. It’s called Mount Tabor, and although technically a mere “extinct volcanic vent,” walking or hiking up to the top of its roughly 440 feet is still a decent workout. Those who bike up it are typically spandex-clad Lance Armstrong types or casual cycling sadists content to chug up at 3 mph. I, on the other hand, pedaled up Mount Tabor at 20 mph. No huffing, no puffing, no sweat, no spandex.

That’s because I was riding a Vintage Electric Café electric pedal-assist bicycle, and after a summer spent zipping around town without the typical cycling concerns of hills, going too damn slow and showing up to your destination drenched, I’m thoroughly sold on electric assist bicycles as a concept. And as for the Café itself, it takes that concept much further with distinctive design, an overabundance of power, high-end componentry and quality craftsmanship. You know, the very things that make our favorite cars objects of desire rather than just A-to-B consumer goods.

There’s another car connection to Vintage Electric, however. This story really starts in January when the company announced its limited-edition Vintage Electric Shelby — a variation of its big-battery, throttle-controlled Roadster painted in Shelby’s iconic blue paint and accented with the familiar cobra emblem. It looked sensational, but not just because of the Shelby livery — it was the bike itself that really piqued our interest.

Vintage Electric offers two types of bikes: throttle controlled with what are effectively token pedals (Roadster, Tracker, Scrambler and Shelby) and the pedal-assist bikes (Café and Rally) that run a motor when you pedal. I spent more time with the Café, which is the red one with white tires and accented with leather hand grips and beautifully finished wood trim. A few folks commented that it looks like Pee-Wee Herman’s bicycle. They’re not wrong, but it’s still distinctive, that movie is 35 years old and you can also get the Café in Skyline Bronze with black tires and darker wood. I know I would.

The real showstopper, though, is the 500 watt-hour battery pack nestled into the frame’s V that can be removed for recharging or to prevent someone from boosting it (a replacement is $999). It’s good for 20 to 60 miles of range depending on how and where you ride it, and the power level you’re using. It also looks like a small V twin engine from a vintage motorcycle.

The 750-watt motor is mounted to the rear wheel hub, versus at the pedals. That output probably means nothing to you — it certainly didn’t for me before testing these things — so let’s put that 750 number into perspective. The typical electric-assist bicycle’s motor only has around 250 watts, including those that cost just as much as the Café or even twice as much. 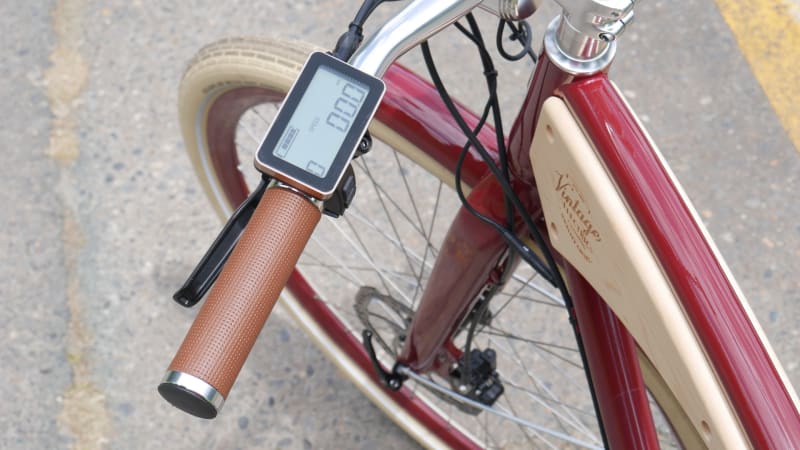 Now, to be clear, I am not an electric-assist bicycle expert. This is only the second one I’ve ridden, but for what it’s worth, the first one I rode had three levels of electric assistance. I deemed Level 3 ridiculous and almost entirely rode around varied terrain on Level 1 with the occasional dip into Level 2. The Vintage Electric Café, by contrast, has five levels, and they sure seem commensurate. Its Level 3 is just as ridiculous, meaning Level 4 is absurd and Level 5 is ludicrous, to borrow the parlance of another maker of electric vehicles. When I motored up Mount Tabor at 20 mph, I was using levels 3 and 4. Going to 5 wasn’t actually necessary.

Don’t just take my word for it.

“This is not bicycling,” said my friend Liz who used to commute daily into downtown Portland on a bicycle pre-COVID. “I was going 22 and white knuckling. And I only went to Level 3. You almost have to wear goggles. Are there bugs in my eye?”

The speed can indeed be disconcerting, since the electric motor is effectively controlled like an on/off switch rather than a throttle. Whenever you pedal, the motor is at its max for the specified power level. So, regardless of how vigorously you’re pedaling, it’s giving its all. Doing so is nuts on levels 4 and 5 when starting off on flat ground. You’ll be pedaling with virtually no resistance, yet the bike keeps flying forward toward its max speed of 28 mph. It can be unnerving on a residential street. 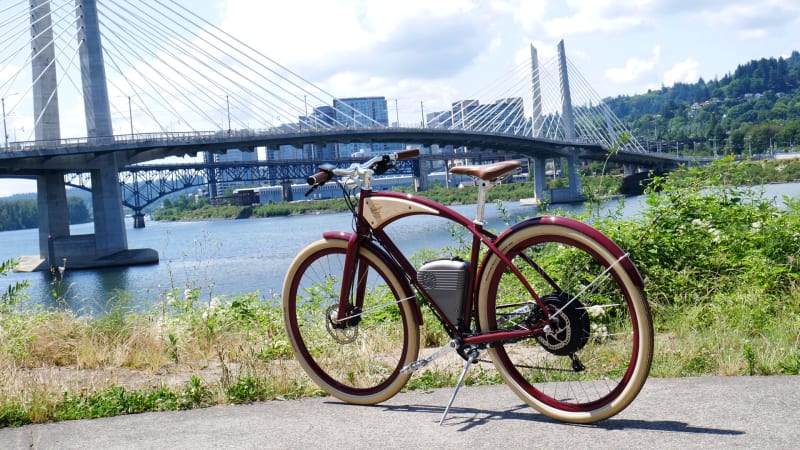 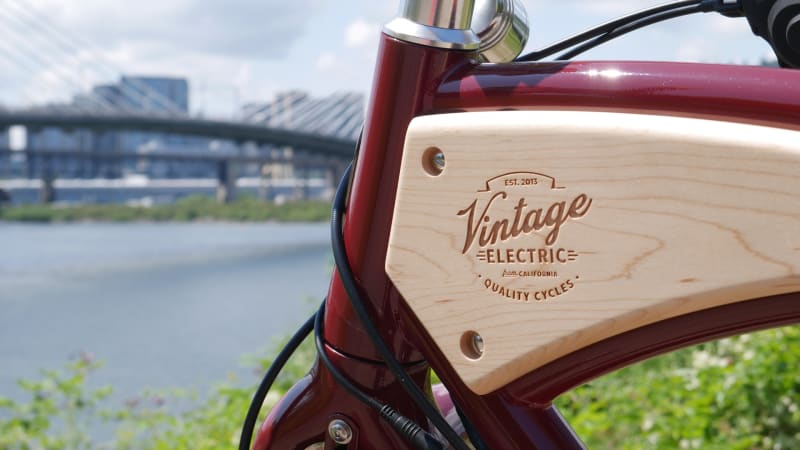 On the other hand, higher speeds are perfectly manageable and actually quite sensational on a dedicated bike trail like the Springwood Corridor that lines the Willamette River in Southeast Portland. The Café’s speed capability also provides you with much greater confidence when riding near cars — at least in a low-speed urban environment like Portland where speed limits rarely exceed 30 mph. In fact, I actually passed a car on a 20-mph street. On a bicycle! Of course, that wasn’t exactly legal, but more on that in a bit.

While riding, I found that I would constantly change the power levels in conjunction with the traditional, 10-speed gear derailleur in order to achieve the right balance of acceleration, speed and effort. Power level is controlled with the left hand, the gears with the right. You still need to pedal to get the Café moving, and doing so can be slow-going and a bit difficult if you don’t downshift sufficiently before coming to a stop. The trouble is, it takes quite a while to go from 10th or eighth gear, where I was typically riding, down to first through third. As such, I typically started out in sixth or seventh, accepted that I’d effectively bog like crazy off the line, and then let the motor make up for it as I blow past the spandex-clad pros on their lightweight road bikes. If I were to make one critical suggestion, it would be for fewer traditional gears. Like a high-torque engine, the Café just doesn’t need that many.

I also found the bike a wee bit uncomfortable since I’m used to a bike with a front suspension and a fat-ass cushy seat, but I was told by all my bike-riding friends that it was actually quite comfortable. Praise was heaped upon the seat and leather-wrapped handles. The fact that you don’t have to pedal very hard (or much) also made up for the fact that my test bike was too small for me — it was a Medium, but there are also Small and Tall sizes available.

That’s not the case with the Vintage Electric Roadster, the black bike shown above with the much larger battery pack. Its handlebars were far too low for me to ride comfortably, resulting in too much of my weight resting on my wrists. Then again, the Roadster does have a front suspension and literally doesn’t need to be pedaled at all. It’ll move away from a stop by itself using levels three through five, although giving it the briefest pedal nudge to start does help a bit. It also has a fixed gear, so pedaling it without electric assist is virtually impossible given its ratio and the bike’s 86-pound weight. The Café is a comparatively svelte but still-husky 53 pounds. Some of the priciest electric assist bikes can weigh somewhere in the upper 20-pound range, though most in the Café’s price range seem to be the 40s.

Otherwise, you control the Roadster’s own 750-watt electric motor with a small plastic throttle paddle that you push down while gripping the right handle bar. It’s easy to figure out and use, but, once again, the power level alters how much you need to move the throttle. It’s a bit of a hair trigger in Level 5 and becomes a little less Ferrari as you move down. I mostly rode around using Level 3 since power was almost always sufficient and the throttle was more easily modulated.

The more easily controlled throttle and heftier weight do make the Roadster feel more secure at the higher speeds it’s capable of going. How much higher? Well, that very much depends. My test bike came with the $149 “Race Mode” option that increases the output of its own 750-watt motor to a max of 3000 watts, and allows for a top speed of 36 mph. Nifty, but there’s a catch. Throttle-controlled electric bicycles cannot legally exceed 20 mph in most jurisdictions, including California where they are classified as “Class 2 eBikes.” By contrast, pedal-assist bikes like the Café are “Class 3 eBikes” that must stop providing assistance once 28 mph is reached. Looking into your state’s e-bike laws is obviously a must, but in California at least, the pricier and more powerful bike can’t go as fast on public roads.

Vintage Electric says that customers often use their Race Mode-equipped Roadsters as transportation around pit lanes during races (one more reason to get the Shelby model, I guess) as well as on private property. That limited use case certainly makes its $6,995 starting price harder to swallow. 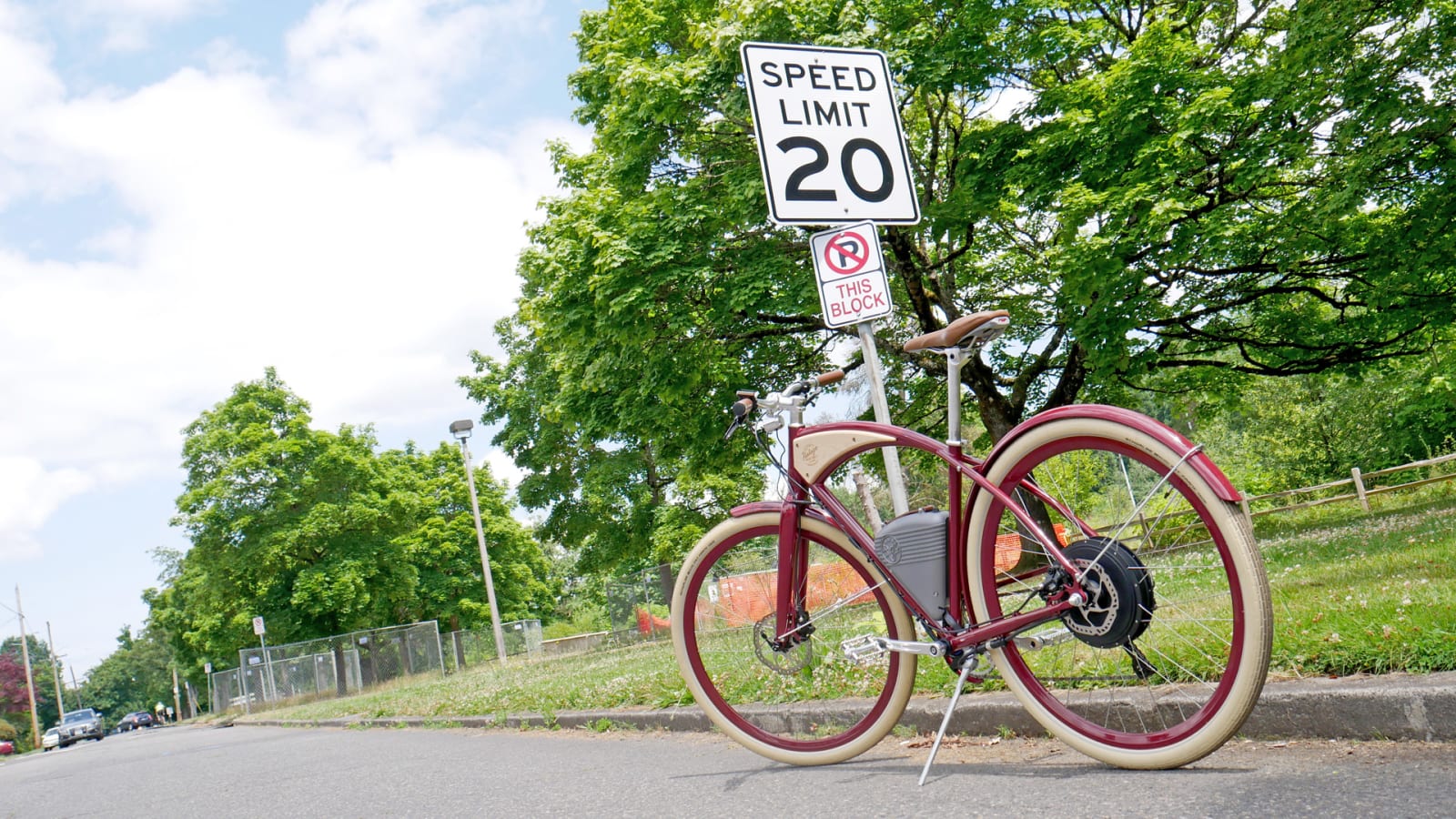 Of course, there was nothing preventing me from choosing to engage Race Mode on public streets, much as there’s technically nothing preventing you from choosing to speed in your car. You obviously run the risk of being cited by the police in both cases, but let’s face it, the prospects of the cops pulling over a bicycle for exceeding the e-bike speed limit in anything but wildly dangerous circumstances seems, um, remote. Still, you’re breaking the law.

As such, that leaves the Vintage Electric Café as the more viable and usable choice, which is why I chose to feature it more prominently here. It also has a far more palatable price at $3,995, which certainly sounds steep, but isn’t unusual for mid-level pedal assist e-bikes. Again, I’m not an expert on the subject, but a brief shop around the internet showed that bikes of a similar price tag had far less powerful motors. So did bikes that were three times the price. Instead, their money generally seems to go to lighter-weight materials and larger battery packs, usually integrated within the frame, that provide more range (typically 80 to 100 miles). They’re also typically lighter, which should be useful for storage and transport, and look like modern bicycles, making it more likely they’ll blend into the crowd (and less obviously say, “Steal me!”)

As I see it, something like a Specialized Turbo Vada SL 5.0 EQ is comparable to a BMW 4 Series whereas the Vintage Electric Café is like a retro-mod Mustang with a modern engine, gearbox and seriously capable brakes lurking beneath a classic old design. Considering I don’t have to worry about crashworthiness as I do with the cars in this analogy, I know which one of the bikes I’d rather ride: the one with the looks and the power.