WASHINGTON — U.S. consumer prices increased for a fourth straight month in September, with the cost of cars and trucks rising by the most since 1969, but inflation is slowing amid excess capacity in the economy as it gradually recovers from the COVID-19 recession.

A 6.7% jump in the average prices of used cars and trucks again accounted for most of the increase in the CPI last month. That was the biggest gain since February 1969 and followed a 5.4% advance in August. The strong increases likely reflect a shortage of used motor vehicles amid an aversion to public transportation because of fears of contracting COVID-19.

New motor vehicle prices rose 0.3%. There were also increases in the costs of recreation. But prices for motor vehicle insurance, airline fares and apparel fell.

Though the benign report from the Labor Department on Tuesday will have no direct impact on monetary policy, it should allow the Federal Reserve to keep interest rates near zero for a while and continue with massive cash infusions as it nurses the economy back to health.

“Price gains are modest as supply chain disruptions have eased and weak demand and excess capacity in many parts of the economy have limited firms’ pricing power,” said Gus Faucher, chief economist at PNC in Pittsburgh, Pennsylvania. “As long as inflation remains below 2% the Fed will keep providing stimulus to the economy.”

The consumer price index rose 0.2% last month after gaining 0.4% in August. The CPI advanced 0.6% in both June and July after falling in the prior three months as business closures to slow the spread of the coronavirus weighed on demand.

In the 12 months through September, the CPI increased 1.4% after rising 1.3% in August. Last month’s inflation readings were in line with economists’ expectations.

Stocks on Wall Street were trading lower. The dollar firmed against a basket of currencies. U.S. Treasury prices rose.

Inflation is likely to remain muted at least through 2021 amid signs the economy’s recovery from the downturn, which started in February, is showing signs of fatigue without more money from the government. At least 25.5 million people are on unemployment benefits. The slack in the labor market has left workers with limited power to bargain for higher wages.

High unemployment makes it harder for landlords to raise rents. The pandemic has also fueled a migration to suburbs and other low-density areas from urban centers, which over time could result in higher vacancy rates for apartments and restrain rent growth. Wages and rents are the biggest inflation drivers.

Owners’ equivalent rent of primary residence, which is what a homeowner would pay to rent or receive from renting a home, ticked up 0.1% in September after a similar gain in August. That led to an annual gain of 2.5%, the smallest since February 2014.

Gasoline prices edged up 0.1% after rising 2.0% in August. But electricity prices shot up 0.9%, the largest increase since October 2018. 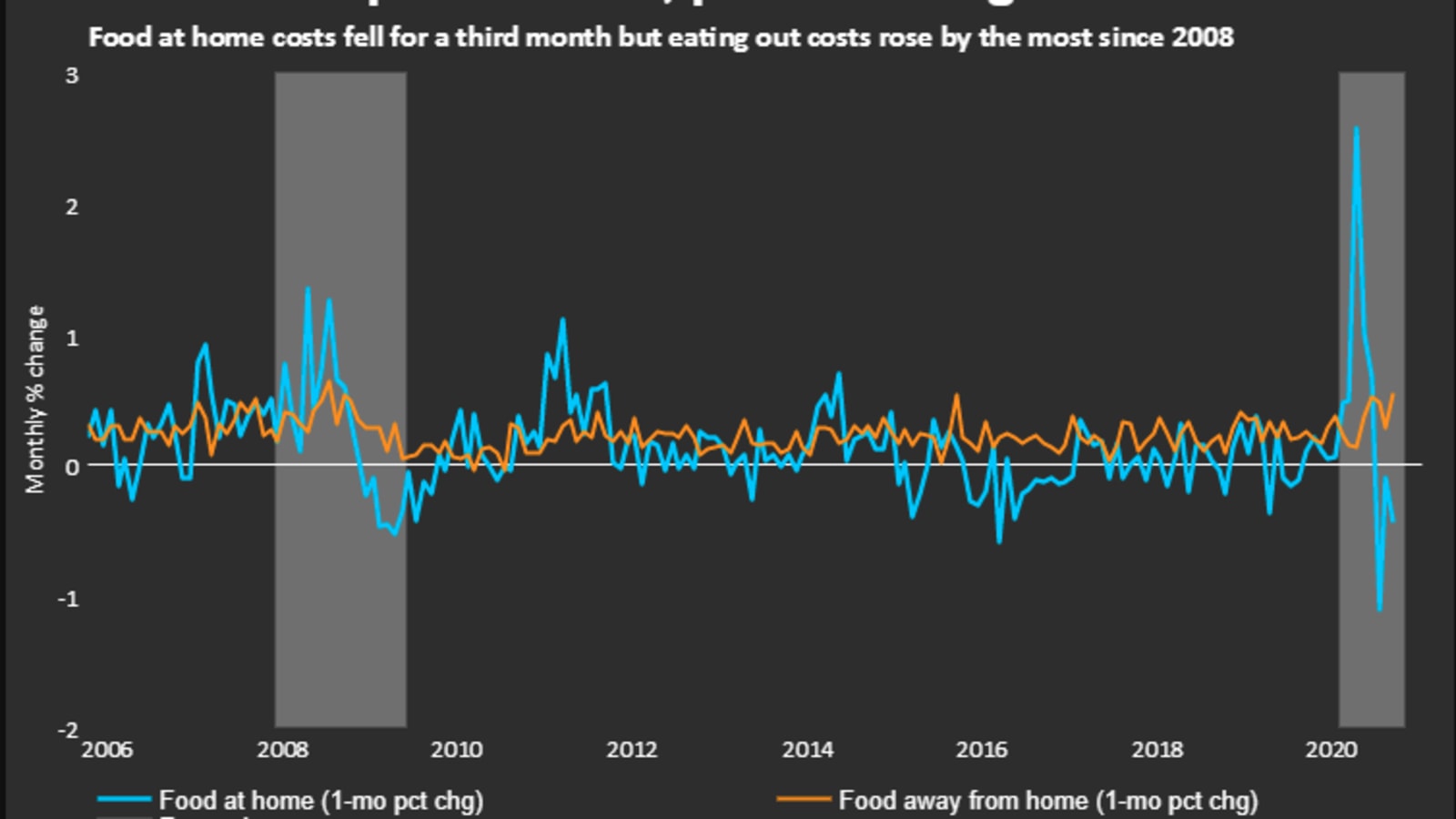 Food prices were unchanged after nudging up 0.1% in August. The cost of food consumed at home fell 0.4%, declining for a third straight month. Prices for nonalcoholic beverages fell 0.8%, the most since December 2010. Dairy products, meat and fruits and vegetables were also cheaper last month.

The cost of food away from home rose further, gaining 0.6%. Prices for limited service meals jumped 0.9%, the largest increase since the series started in 1997. Restaurants have raised prices to cover costs related to social-distancing measures aimed at preventing the spread of the coronavirus.

The cost of recreation rose 0.2% last month. Apparel prices decreased 0.5% after rising for three consecutive months. The cost of motor vehicle insurance declined 3.5%. Airline fares dropped 2.0% after increasing in each of the last three months.

Healthcare costs were unchanged after gaining 0.1% in August. Costumers paid more for hospital services, but less for doctors’ services and prescription drugs.

Education prices fell 0.3% after dropping by the same margin in August, which was the first decline since the series started in 1993. Many schools and universities have shifted to online classes because of the pandemic.

“We expect inflation to remain below its pre-pandemic trend as the demand backdrop remains generally weak, especially for services,” said Sarah House, a senior economist at Wells Fargo Securities in Charlotte, North Carolina.