Autoblog wasn’t around for the literal first drive review, but as they say, it’s better late than never. Take a trip down memory lane in our latest retro first drive.

With automotive press launches curtailed, some manufacturers have taken to revisiting past glories, rolling out classics from their collections and making them available to drive. We’ve previously slipped behind the wheel of a ‘64 Volkswagen Karmann Ghia, ’67 VW Microbus and a pair of Hondas from 1999: a Civic Si and a Prelude Type SH. Now we’re getting to dig a little deeper into the Honda museum vault in Torrance, Calif. with a turn in a 1985 Honda CRX Si.

This early CRX hails from what we now recognize as a golden era for Honda. The company had made a name for itself with the timely original Civic, a highly efficient subcompact that aced its EPA fuel-economy tests just as the first gas crisis hit. When the Accord joined the party for 1976, that car seemed miles ahead of other Japanese compacts at the time and grew more so with its second generation. But it was the new Civic lineup that appeared for 1984 that really made a quantum leap, and arguably began the period of Peak Honda. (The Accord would get its blockbuster redesign for ’86.)

The ’84 Civic lineup was expansive, with a kammtail two-door hatchback, a four-door sedan, a funky tall-roof wagon, and the new CRX two-seater. The egg-shaped hatchback initially was seen as an ultra-high-mileage commuter — the CRX HF (for High Fuel Efficiency) boasted 49-state EPA ratings of 49/54 mpg, the best of any car on sale. But as the smallest and lightest Civic, the CRX also was a natural as a pocket rocket. Thus, in 1985, the CRX Si was introduced.

Changes to the Si naturally began in the engine room. The CRX Si’s 12-valve 1488cc engine was the first to get Honda’s new Programmed Fuel Injection, boosting output from 76 horsepower for the regular CRX to a thundering 91 ponies. It being the ’80s, a time when much of the driving public could still operate a stick shift, a five-speed manual was the only transmission offered (a tradition that continues to the Civic Si of today). The Si suspension was the same as in the standard car, with a torsion-bar front suspension and a rear beam axle, front and rear anti-roll bars, nitrogen-filled rear dampers, aluminum wheels, and Michelin radials. A power sunroof that slid rearward above the roof rather than within it, a larger rear spoiler, and halogen headlights were also included.

You’d pay more than that for a nice one today — even though the second-generation ‘88-’92 models are more prized by collectors. Most of these cars were driven hard, so nice ones are tough to find. 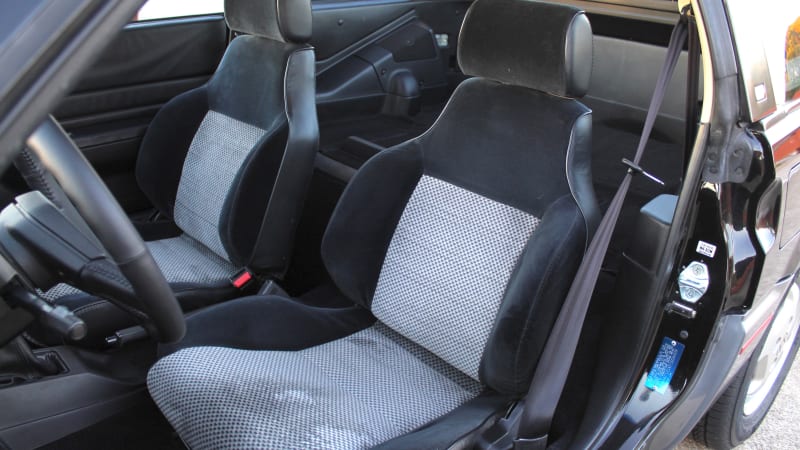 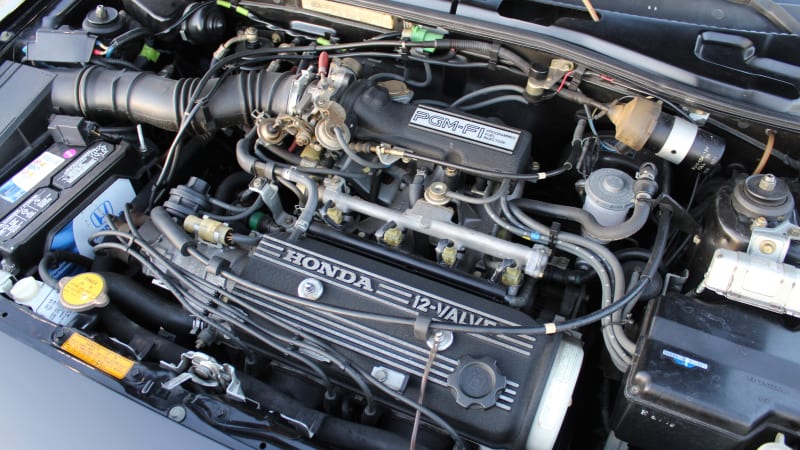 This is a nice one, with just over 10,000 miles showing on the clock, though it’s not perfect. There are some bubbles in the paint, and the exterior plastic trim has grown dry. It’s nonetheless a remarkable window into another era at Honda.

The first thing that strikes you is how small it is. At just under 145 inches long and standing a scant 50.8 inches high, it’s substantially smaller than a current Mini Cooper. The diminutive, 86.6-inch wheelbase allows a 28.2-foot turning circle. The factory-stated curb weight was just 1,864 pounds.

Click open the door with the aero-friendly sideways handle, and slip inside. The wildly patterned cloth seats are low to the floor, yet the cabin actually seems quite airy. The instrument pod stands up from a minimalist dashboard, a low beltline makes for large side windows, and a behind you is a glassy hatch. The lack of rear seats, the slender upper seatbacks, and thin pillars further the impression. There’s no center console to speak of; the area between the seats is taken up by the parking brake handle, and the thin wand of a shifter pokes up ahead of it. The cassette stereo — with an equalizer — sits low in the dash, with a slotted open cubby below for your most favorite cassettes (maybe “Born in the U.S.A.,” “Like a Virgin,” or “We Are the World”).

Unassisted steering brings all the road feel and never gets too heavy because there just isn’t that much weight on the front wheels. But, if we’re being honest, there’s a fair degree of play in the wheel (maybe time for new bushings?). Shift action is light, and the clutch travel is short, although the pedals are close together (unlike the current Civic Si). Honda was novel for the quality feel of its basic controls, and you can experience it here in the manual remote-mirror adjustment, the snick of the headlight switch, or the action of the turn-signal stalk. Ninety-one horses aren’t a lot by modern standards, even in a sub-1,900-pound car, and the CRX Si feels faster than it really is. Period track tests clocked the CRX Si at 9.1 seconds from zero to 60 mph, considered quick at the time. The engine is busy, turning 3,000 rpm at 60 mph, and the driver is too, stirring the five-speed gearbox.

The brand’s early ad campaign said “We make it simple,” and that was still true with cars like the first-gen CRX. Many good and even great Hondas would come later, but they were necessarily heavier and more complicated. The great charm of this era of Hondas is that they sit at the junction of simplicity and modernity. That’s true of this CRX Si, which also is clearly the product of a company that was firing on all (four) cylinders.