I’m always on the lookout for cars and trucks with ridiculously high final odometer readings when I’m scouring the car graveyards for interesting bits of automotive history. Making this task difficult is the five-digit odometers used by just about all manufacturers prior to the 1980s and the electronic-display odometers you’ll find in most 21st-century machines, but I know where to look if I want to see more than 400,000 miles on the clock: Mercedes-Benzes. Here’s a 1985 W126 S-Class in California with the second-highest final mileage figure I’ve ever seen on a discarded Mercedes-Benz.

Yes, at its average rate of just over 1,220 miles of driving each month, this car would have reached the magical 600,000-mile mark in a mere 23 more months on the road. I’ve seen only one junkyard Mercedes-Benz that showed better than 600k miles on the clock: a gasoline-fueled W201 C-Class with a manual transmission, also in the San Francisco Bay Area. A mid-apocalyptic Colorado diesel W126— a 1985 300SD, just like today’s car— had 535,971 miles when its career ended. After that, my other high-mile junkyard record-holders include a 1990 Volvo 740 Turbo wagon with 493,549 miles, a 1983 Honda Accord sedan with 411,794 miles, and a 1988 Toyota Tercel 4WD wagon with 411,344 miles. I’ve found a 1982 Volkswagen Rabbit Cabrio showing 930,013 miles, but I suspect a defective odometer in that case (partly because Mk1 Golfs generally didn’t hold together so well and partly because you’d have to be crazy to drive a convertible 26,500 miles per year in the Colorado High Plains region). 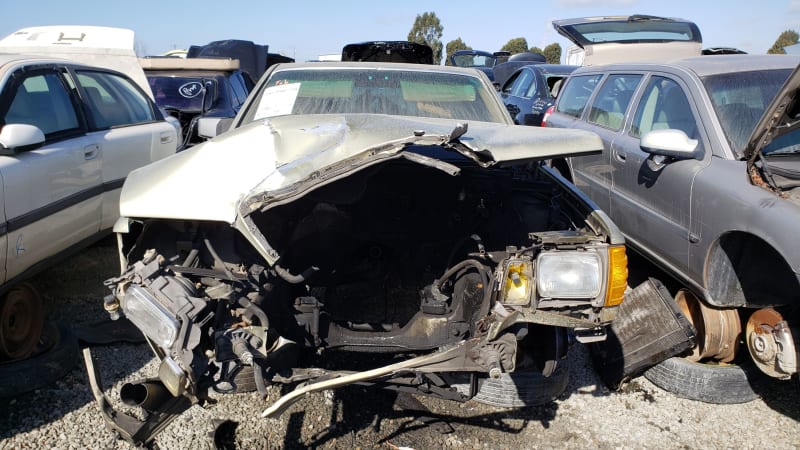 I think this car got crashed, but the hood damage appears more typical of what you get when impatient junkyard employees need to get a stuck hood latch open in order to drain the fluids. Then junkyard customers tore apart the front bodywork in order to tear the engine out quickly. 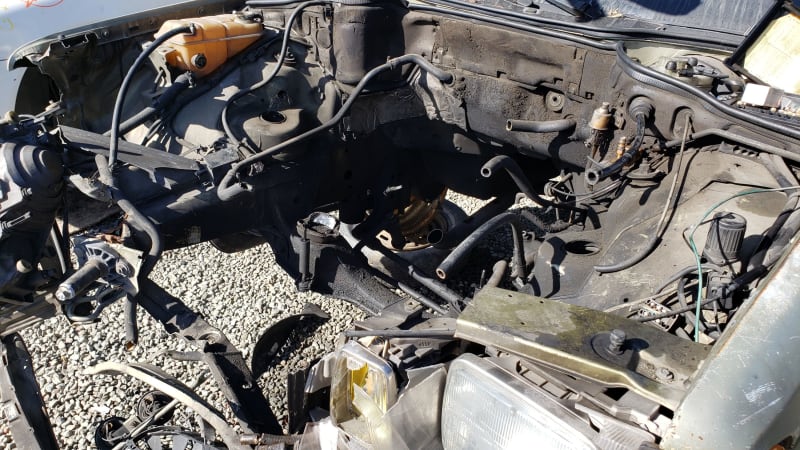 Which brings up the question: Who wants to buy a half-million-mile engine? The legendary OM617 five-cylinder turbodiesel may be the toughest car engine ever built, but it’s easy enough to find one in a U-Wrench yard with a just-getting-broken-in 379,000 or so miles. If you’re patient, you can get one that never even hit 220,000 miles! 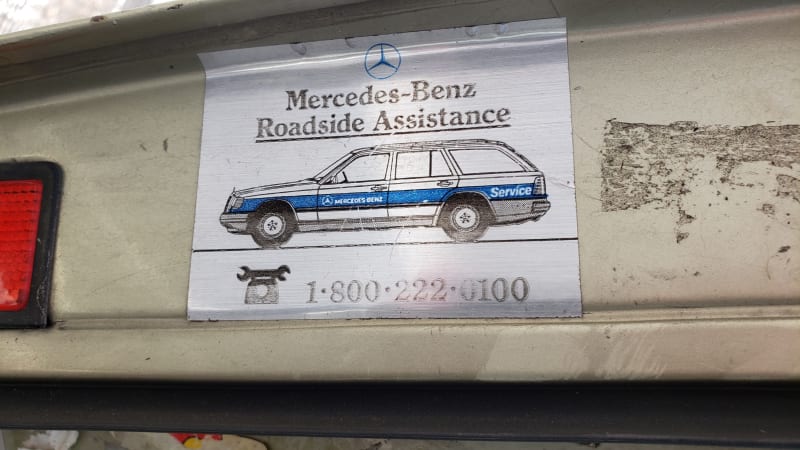 We can feel confident that the owner or owners of this car didn’t dial this number often. 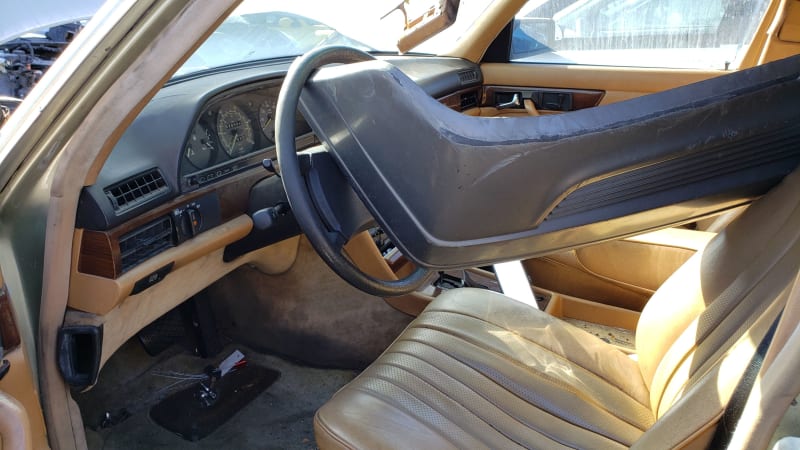 The interior looked decent when the car got here, though you can see the carpet grime from 10,000 or so hours of contact with driver feet. 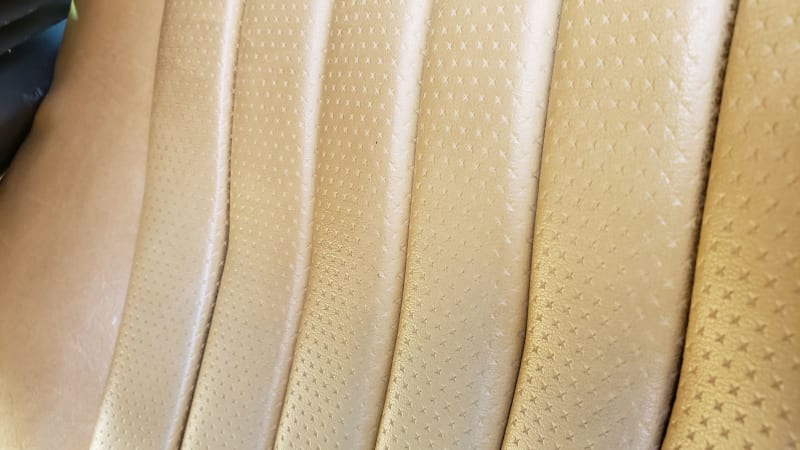 MB-Tex faux-leather is hands-down the toughest upholstery material ever installed in a motor vehicle. I’ve seen plenty of this stuff looking great in old Mercedes-Benzes that were left sitting outdoors with the windows down for decades. Someday I’m going to slice all the MB-Tex out of a 1980s W126 and get a jacket made from it. 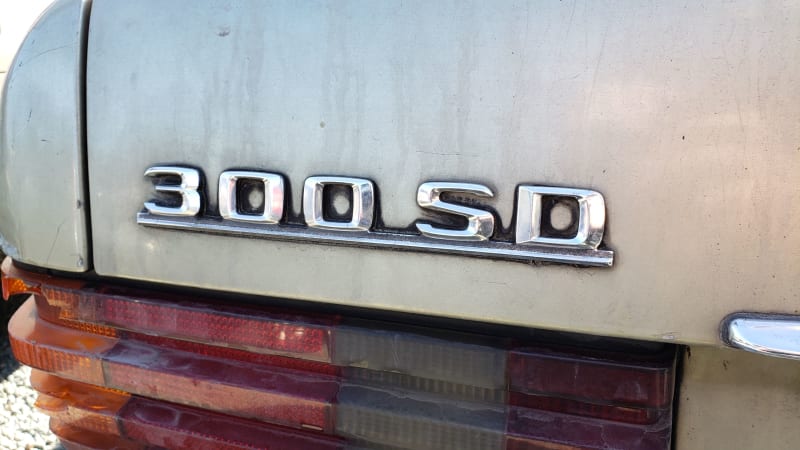 Most Americans who bought the W126 S-Class went for the big, mean V8 gasoline engine, which was a beautiful piece of engineering that would haul these massive beasts at Autobahn speeds for hour after hour… but if you could live with just 123 horsepower in a 3,730-pound car in 1985, the 300SD was the better investment. 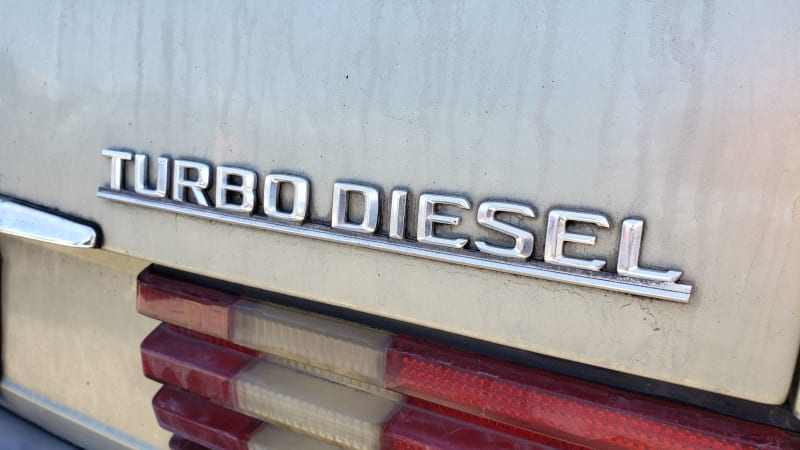 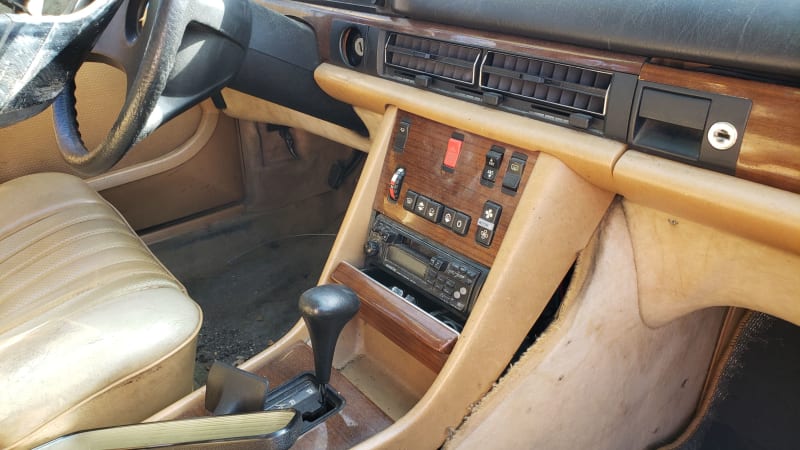 Now its days on the road are done.