Something is going to happen tonight that most of us who cover the automotive industry would’ve thought impossible. Or insane. Just in time for Halloween, the Hummer is rising from the grave. While it will be making its return in a way that’s certainly ironic – it’s all-electric as opposed to being so heavy that it wasn’t subject to EPA fuel economy testing – it got us thinking about the entire era from which the original Hummer H2 sprang.

Back in the 2000s, it was clear that the American public had a thirst for trucks and SUVs. That those trucks and SUVs had a great thirst for 87 octane would result in many of their downfall by the end of the decade. Nevertheless, rather than crank out mostly similar models of vaguely different sizes and the occasional “coupe-like” roofline as brands are doing in today’s truck-and-SUV-hungry market, car companies back then let their freak flags fly. They tried stuff, got creative. Cars were turned into trucks. SUVs were turned into XUVs. A Chevy Trailblazer was turned into a Saab. The Chevy SSR. Actually, come to think of it, it was really GM that was throwing as much stuff against the wall in the hopes that something would stick. Alas, the wall was coated in Pam.

Anywho, that’s our little introduction for us taking a bunch of Member Berries and recalling the shocking number of weirdo truck things born during the Bush years … and that mostly died when gas prices soured and the economy tanked.

Truth in advertising, eh? This won’t be the only vehicle on here from the GMT360 platform, but it’s without question the most distinctive. Technically, it was distinctive enough that it was codenamed GMT305, so file that away trivia kings. Basically, the XUV was a lengthened Envoy with a fully enclosed waterproof bed area rather than a traditional cargo area plus, crucially, GM’s “MidGate” that could be lowered to extend that bed further into the cabin. The tailgate could drop down or swing out (like a Honda Ridgeline) and swallowed the glass above. The roof section then slid forward to create an open truck bed capable of carrying tall things like a grandfather clock or something. It looked like this. Weird, right? 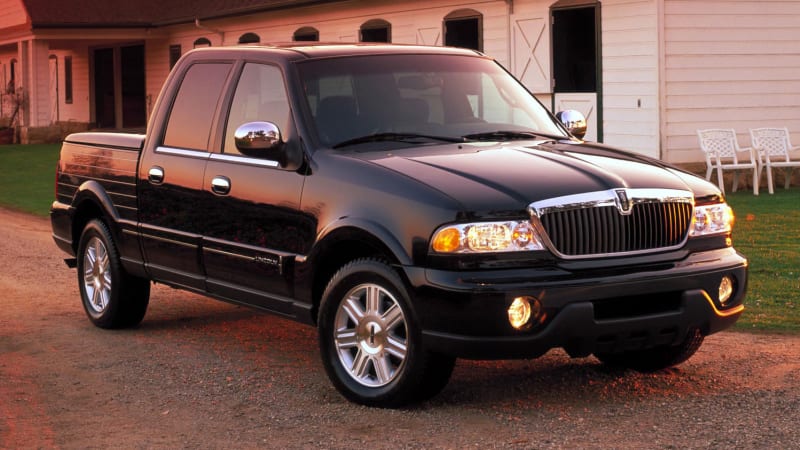 The idea of a Lincoln pickup isn’t outlandish, the brand is nevertheless batting 0 for 2. It’s first attempt was a real whiff as it lasted only one year. While actually a reasonably handsome thing, the Blackwood was effectively neutered by the genius decision to cover the bed with a trunk-like tonneau cover, give it Mini Clubman-style barn doors AND, here’s the kicker, line it in plush carpeting. It looked like this. People thought that was rather stupid and didn’t buy it. Except the father of our own Zac Palmer who actually uses one as a tow vehicle for his Acura NSX. That’s just awesome. 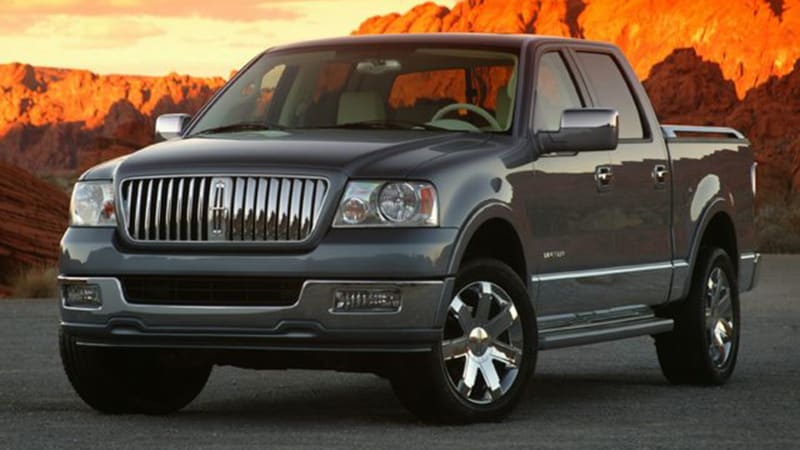 Despite the failure of the Blackwood, Lincoln took one more stab at a pickup truck with the Mark LT. It had a conventional, uncarpeted truck bed, and was essentially an F-150 with a Navigator face and interior. It was also more of a functional truck than its only competitor, the Cadillac Escalade EXT (see below). Nevertheless, it sold poorly and lasted only from 2006 to 2008 … well, at least in the United States. Strangely, it saw some success in Mexico, where a second generation lasted from 2010 to 2014 based on the also-updated F-150. That version borrowed the “baleen” grille used on other contemporary Lincolns. 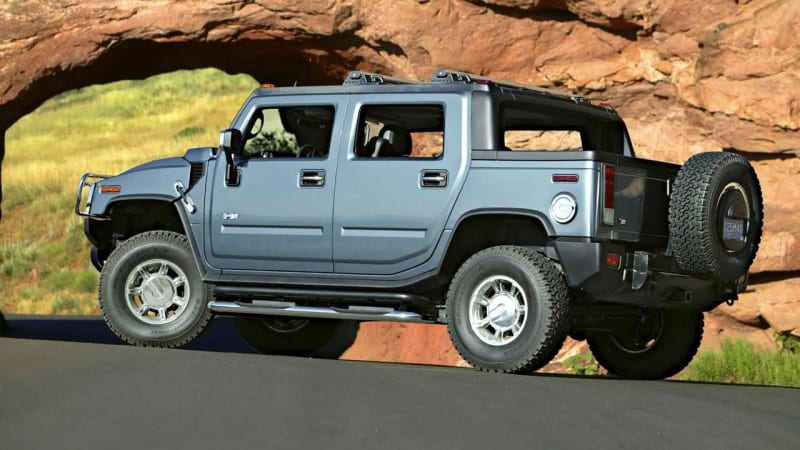 I drove one of these once. It was not an enjoyable experience. It took nearly 11 seconds to reach 60 mph, the handling was atrocious, the interior was a chintzy 2000s plastic paradise, back seat headroom was laughable, interior space in general was poor for such a cataclysmically enormous vehicle, visibility was indicative of a bumper, and parking it someplace other than a slot normally reserved for RVs was difficult. And that’s before we take into consideration the SUT bit, or the rinky-dink truck “bed” in place of the regular H2’s SUV cargo area. Like the Envoy XUV, it utilized the “MidGate” first featured on the Chevy Avalanche, but it wasn’t enough to actually make the thing functional as a truck.

Most publications at the time got around 10 mpg during their tests, though our own Jeremy Korzeniewski says owners would often see 13 mpg, which was about the same as a Toyota Land Cruiser or Range Rover at the time. He also says the H2 is unfairly criticized and probably isn’t too keen on me ripping it a new one up there. 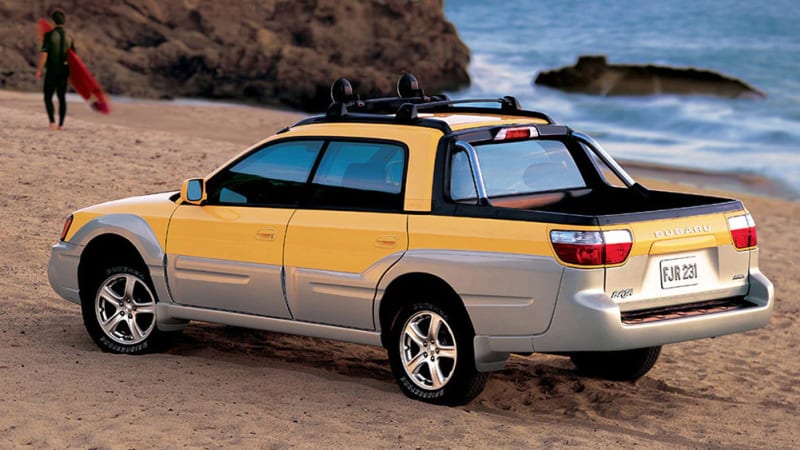 “Hey, people loved it when we took the Legacy wagon, added ground clearance, some body cladding and made it more macho in appearance. Why don’t we try it again, but instead of creating a wagon/SUV, we make a wagon/truck? Won’t that be awesome?”

Well, ish. Needless to say, the Baja did not catch on as the Outback did. It is quite fondly remembered, though. It had its own version of the GM MidGate, plus a license plate holder that swung down so you could legally drive with the tailgate lowered. It also had pipes for bed buttresses, because as the Avalanche and Honda Ridgeline proved, you couldn’t have a weird truck thing in the 2000s without buttresses. They were the gothic cathedrals of their day. 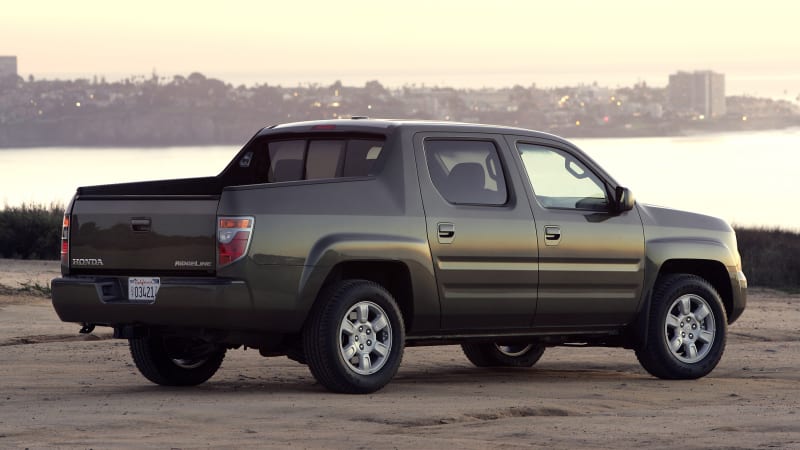 Speak of the devil. One of the few weirdo SUV/truck things to survive the Great Recession, but it certainly wasn’t a success. It seems safe to say that the reason was that it was too weirdo. Those buttress-like sail panels really put people off and the entire design was deemed too strange for the traditional truck buyer. The unibody construction wasn’t exactly loved, either, but Honda believed in the general concept enough to bring the Ridgeline back for a second go with more traditional styling … which it has now updated to be more macho. 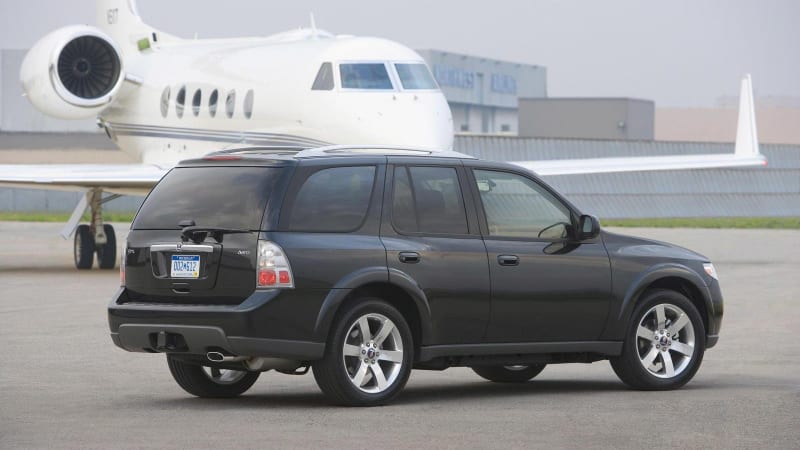 In its half-assed attempt to keep Saab afloat, General Motors came up with genius ideas like rebadging a Subaru Impreza Wagon a Saab 9-2X and rebadging a Chevrolet Trailblazer into the Saab 9-7X. Oh, it had the Saab face, the wacky Saab air vents and the ignition on the center console, but they weren’t kidding anyone.

Born from Jets? Despite the marketing and press photos, ah, hard no. 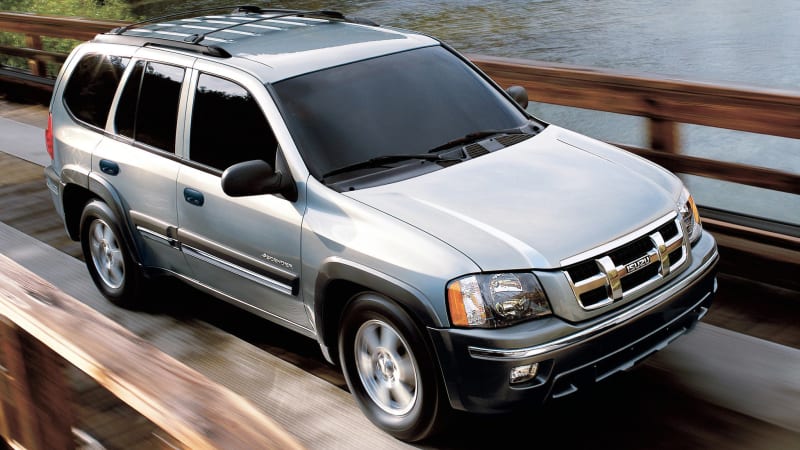 Yep, this was a thing. GM basically was slinging out GMT360s like Halloween candy. Seriously, the most shocking thing about the mass proliferation of the platform that also included the Oldsmobile Bravada and Buick Rainier was that there was never a Cadillac version to fill out the bingo card. 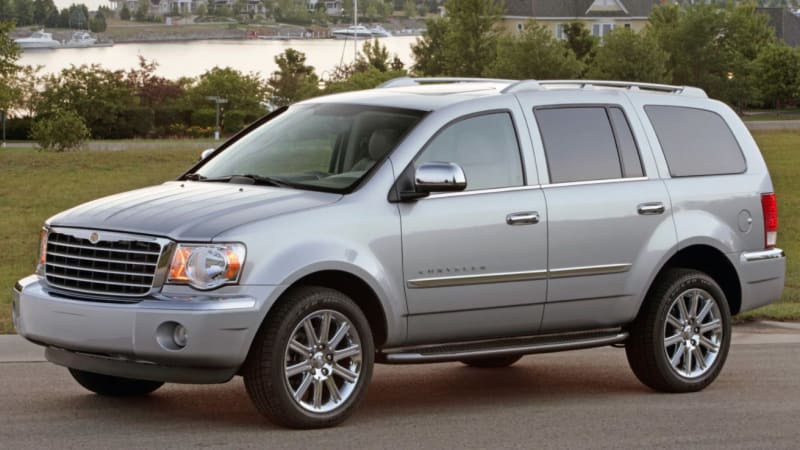 Though Chrysler did plenty of experimenting in this time period (see Caliber, Dodge), it didn’t fully explore the space like GM did. That doesn’t mean it sat completely on the sidelines, as the short-lived Chrysler Aspen proves. As you can clearly tell from the picture, it was a Dodge Durango with Chrysler styling and a kinda-sorta-ish nicer interior. You could even get it as a Hybrid. Now that’s a unicorn. 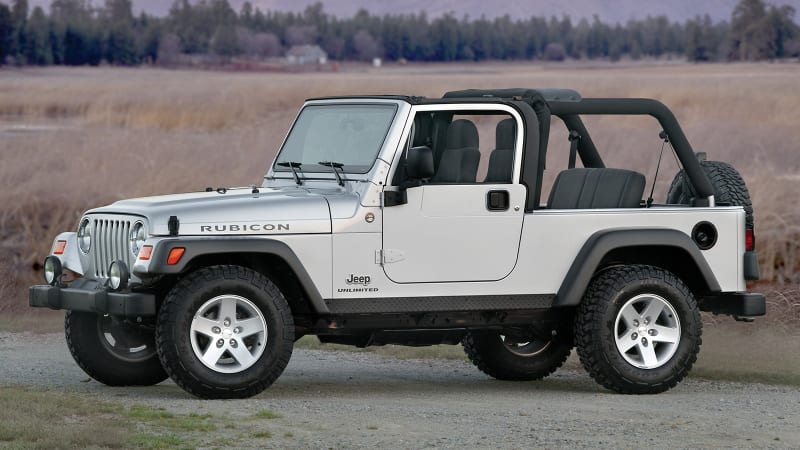 Before the Unlimited became a proper four-door model, Jeep dabbled with the idea of a more practical Wrangler by stretching the TJ generation. It was 15 inches longer than the standard Wrangler (and you could totally tell by looking at it), which provided 2 extra inches of rear legroom and 13 more inches of cargo space. It also doubled towing capacity. (Note, all of these facts and figures are courtesy whoever wrote them onto Wikipedia). This definitely isn’t the weirdest thing on here, but it isn’t exactly going into the Jeep Hall of Fame, either. 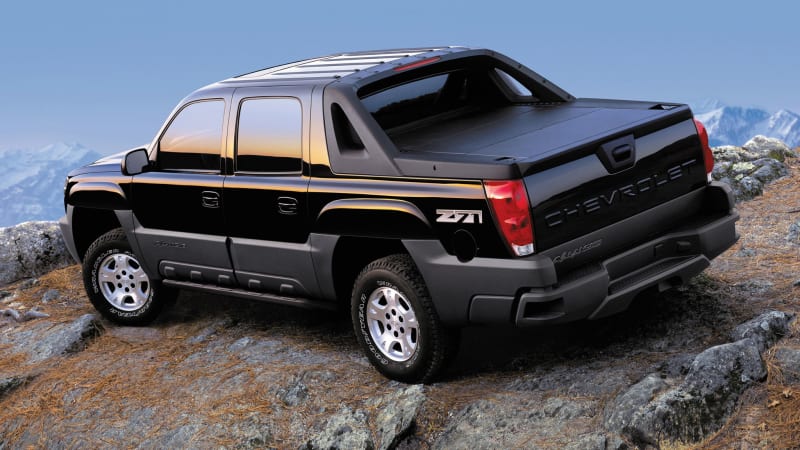 We’ve mentioned it a lot to this point, but the Avalanche was an early attempt at trying something different in the truck space. Basically, it was more passenger-oriented than a Silverado, but obviously offered the pickup bed advantages that a Tahoe could not. It pioneered the MidGate concept and was blessed with buttresses.

Although the Avalanche lasted two generations, it never sold well. It topped 63,000 in its first year, which is just OK by GM SUV and truck standards, and fell off a cliff when gas prices spiked and the economy went into the toilet. 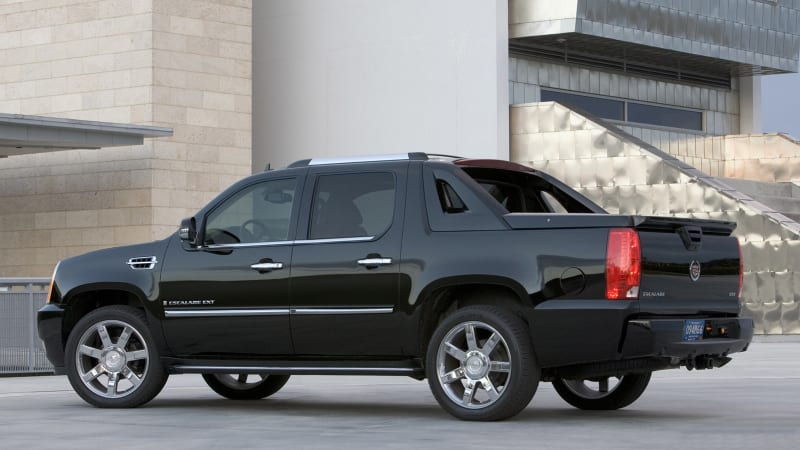 Not too complicated, really. Cadillac styling, interior and DUBs applied to the Avalanche body. Wipes hands. Alright, moving on. 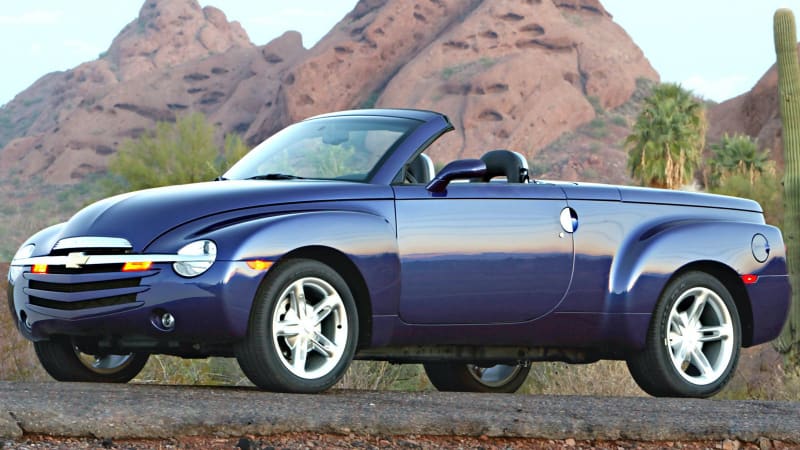 And for something completely different from the 2000s weirdo Chevrolet truck department. While we’ve been critical of GM thus far, mostly because of the GMT360s, one has to give them credit for making something so unabashedly fun and creative like the SSR out of that same damn platform (it was internally dubbed GMT368). It was a two-seat retractable hardtop convertible pickup with a 5.3-liter V8 and later the C6 Corvette’s LS2 V8. The latter made it actually quick.

The SSR was nonsense in the best possible way. Only Elon Musk would do something like this now. 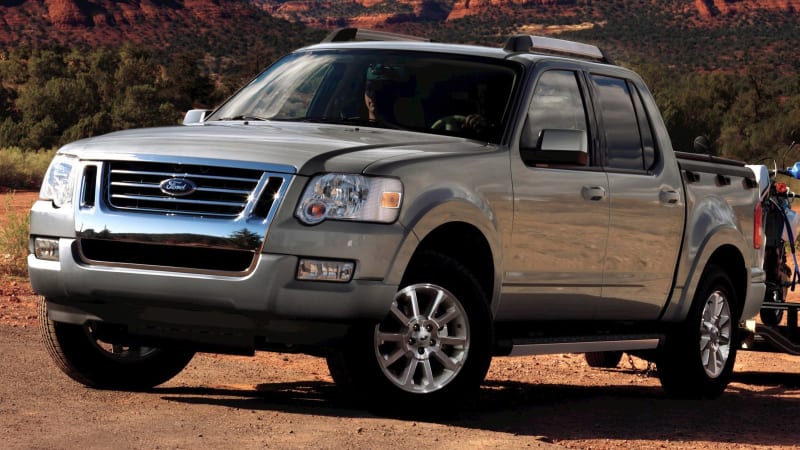 Though Ford definitely wasn’t as experimental as GM during this time, it nevertheless dabbled in the arena with the Explorer Sport Trac pickup (it beat the Avalanche to market by several months). Ford didn’t break its sales out from the regular Explorer, so we don’t know how many were moved, but it must’ve been a decent amount since it actually lasted two generations, and shockingly, from 2001 to 2010. The second generation’s bed was only 4.5 feet long, which was still better than the H2’s 3-foot bed, but it didn’t benefit from a MidGate-like extension into the cabin. The second generation also had an independent rear suspension, making the Explorer Sport Trac the first body-on-frame pickup to have an IRS … though many wouldn’t consider this a proper pickup anyway. Nor the Hummer H1 that also had one. 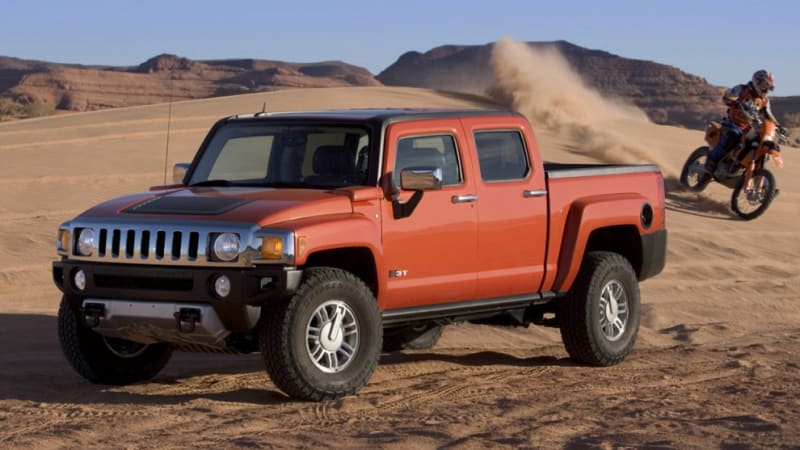 Shockingly, this was not related to the Chevy Trailblazer. It, along with its H3 SUV sibling, was related to the Chevy Colorado and GMC Canyon twins, and shared their standard inline-five engine. Yes, five, cause that was a thing. It wasn’t an efficient thing, though, as the H3 managed only 16 mpg combined, which is, um, not good. It then dropped to 15 mpg when the engine went from 3.5 to 3.7 liters for 2007. We should note that you could apparently get one of these with a manual transmission, which seems extraordinary. Not only that, but an Alpha trim level arrived in 2009 with a 5.3-liter V8 making 300 horsepower. That one was only offered with an automatic, and it’s actually rare enough that it’s sought out on the used market.

We fully expect the new all-electric GMC Hummer EV to be monumentally better than both its H2 SUT and H3 SUT predecessors. Frankly, it would be hard not to be.