The 2020 BMW X6 M Competition in this purple Ametrin Metallic paint is a flex. It’s arrogant, nonsensical, ostentatious and oh-so-fun to drive.

I was in a constant battle with my senses the whole week this car sat in the driveway. On top of being less utilitarian than a similar X5, the design is polarizing. It’s reminiscent of a beached whale when examined in profile, and the rear end is offensively frumpy. Visibility is horrid. Yet, the gorgeous purple paint and M Competition trimmings kept reeling me back in.

The comments section is all too predictable with a vehicle like this one. It’s ugly. It’s useless. Why would anyone buy this? Crossover coupes tend to raise my hackles, too, but humor me for a second. This BMW has a normal-sized kidney grille with black-painted vertical slats exposing enough cooling hardware to keep engine temps low on Venus. The front bumper’s real, and functional side air intakes reveal even more intensive cooling gear. Bulging fenders flare out in usual M fashion to accommodate the lethal rubber within — 295/35ZR21 front and 315/30ZR22 rear. The tires have so little sidewall that they look like rubber bands stretched around the gigantic multi-spoke M wheels that expose massive brakes (six-piston front, single-piston rear calipers). You get two spoilers, one extending from where the roof line begins to slope, and the other tacked onto the liftgate lip. A real (and loud) quad exhaust with black-painted tips exits out the rear diffuser trim. There is a lot more, too.

It’s as if BMW designed the X6 as the M and M Competition models first with the standard xDrive40i as an afterthought. It just looks like a pedestrian joke in comparison. For the utility-compromised, sportier shape to work, it needs the rest of the stage dressing. Done up with all of the functional scoops, vents, winged mirrors and more, it’s easier to understand the appeal. It looks like it’s ready to gap Corvettes and Mustangs, but in a body style apparently more relevant for more buyers these days. 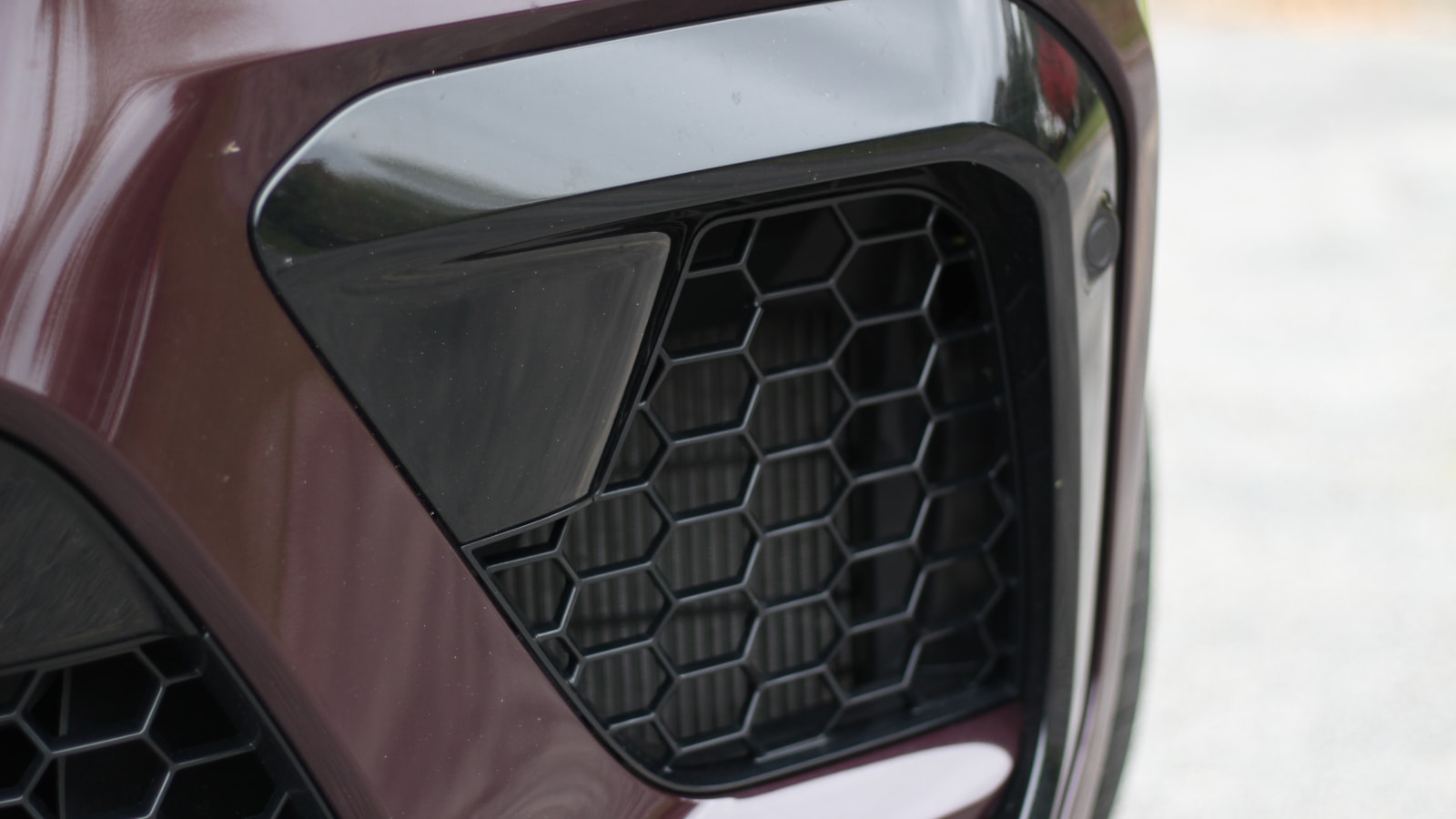 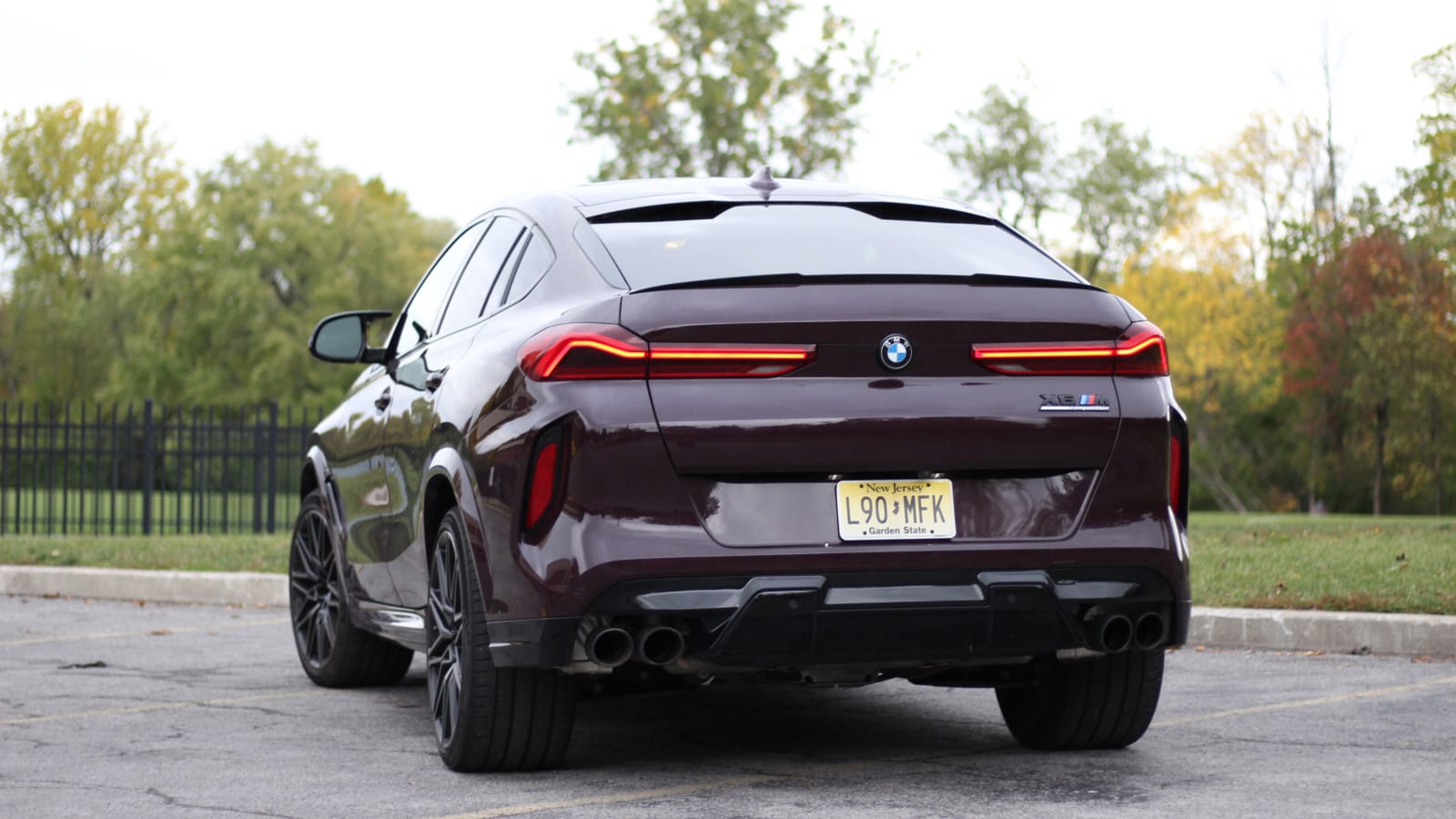 This car announces its arrival. My friend could tell I was in the driveway because their house was vibrating. Its deep rumble comes courtesy BMW’s 4.4-liter twin-turbo V8 tied to an eight-speed automatic transmission and that quad exhaust. In Competition guise it makes 617 horsepower, 553 pound-feet of torque and revs out to 7,200 rpm. The output of all BMW engines these days seems criminally underrated, and this one is no exception. It is relentless in its power delivery. Some BMWs sound synthesized and fake from the cabin (partly because BMW literally pumps in synthesized noises into the cabin), but the M Competition version of this V8 has an unmistakably real mechanical growl in the upper rev ranges.

This X6 M Competition simply assaults your senses with uncanny grip. Want to launch it in the rain? No problem. With warm tires it flies off the line just as clinically as it does in the dry. Cornering grip is freakish. The Michelin Pilot Sport 4S tires cling to the tarmac like your tongue would to a frozen pole. With the dampers in Sport Plus, body roll is nearly undetectable from the cabin. This chassis’ sheer stiffness is something to behold. Nothing moves, sways or leans. Naming it “Competition” would suggest this, but this 5,375-pound crossover seems like it would be creepily good on a racetrack. I was unusually exhausted and breathless after hustling it around my standard testing route.

As any proper M car does, this one will go sideways in a hurry. You can’t disconnect the front axle like you can in an M5 or M8, but a tap of the TCS button provides a more aggressive torque apportionment to the rear wheels and unfurls a longer leash. It’s all you can use safely on the road, but stability control can be switched off for track shenanigans, too.

There are a few complaints. The brakes have two modes — Comfort and Sport — since it’s a brake-by-wire setup, and the pedal isn’t stiff enough in either mode for an M vehicle. BMW’s variable ratio steering is still bad at communicating what’s going on with the tires, while the steering wheel itself is unreasonably thick. This is hardly a new BMW complaint. The eight-speed transmission is perfect for daily use and when left to its own devices in Sport Plus, but it’s missing the crispness of Porsche’s PDK or Mercedes’ multi-clutch transmissions when using the paddles. Lastly, and this goes for all BMWs: Stop using tiny, plastic paddle shifters on six-figure M cars. The Subaru Outback has better paddles, and its transmission doesn’t even have gears.

Onwards to the compromises. The X6 basically takes some of the best parts of an SUV and throws them into the trash can. You lose about 20% of the X5‘s cargo capacity on paper, but in practice, it’s even worse since the cargo area’s sloped shape really only leaves you with something akin to a big sedan’s trunk. The X5’s smart two-piece hatch is also gone, and the load floor is awfully high, though at least you gain some underfloor storage. Sitting in the rear seat is like sitting in a coffin with tiny windows.

But wait, there’s more. This being an X6 M Competition model with its extra bracing, stiffer mounting points, increased front camber, adaptive M suspension and active stabilizer bar, the ride is pretty harsh (even with the dampers in Comfort mode). Every bump, frost heave, pothole and road imperfection is transmitted into your body. Maybe that’s to be expected given its hardcore M badge, but even the most intense Porsche Cayenne Coupe is never this harsh when driven on broken roads.

I took it for a longer-than-normal (about 300 miles) trip on the highway to see how it would fare as a grand tourer. After all, a 617-horsepower luxury SUV coupe sounds like the perfect companion for a road rally with all your supercar-owning friends. On well-maintained highways, the X6 M comports itself well. Crank up the tunes on the $3,400 Bowers & Wilkins audio system. Settle back into the Full Merino Leather seats, and set the seat massagers to “Full Body Activation.” Put the chai tea latte in the heated cupholder. Rest the elbows on the heated armrests, and let BMW’s excellent driver assistant guide the car down the highway. I’m sure it’s the height of luxury on smooth highways. We don’t have those in Michigan.

Tire roar is ever present, while the occasional spine realignment from potholes helped keep me awake. BMW’s gimmicky “Caring Car” Vitalize program is a more elegant solution to road trip sleepiness. It plays upbeat music, constantly dims and brightens the ambient lighting and leaves the fan speed in constant flux to keep you on your toes. Just what the diehard M-car enthusiasts envisioned. 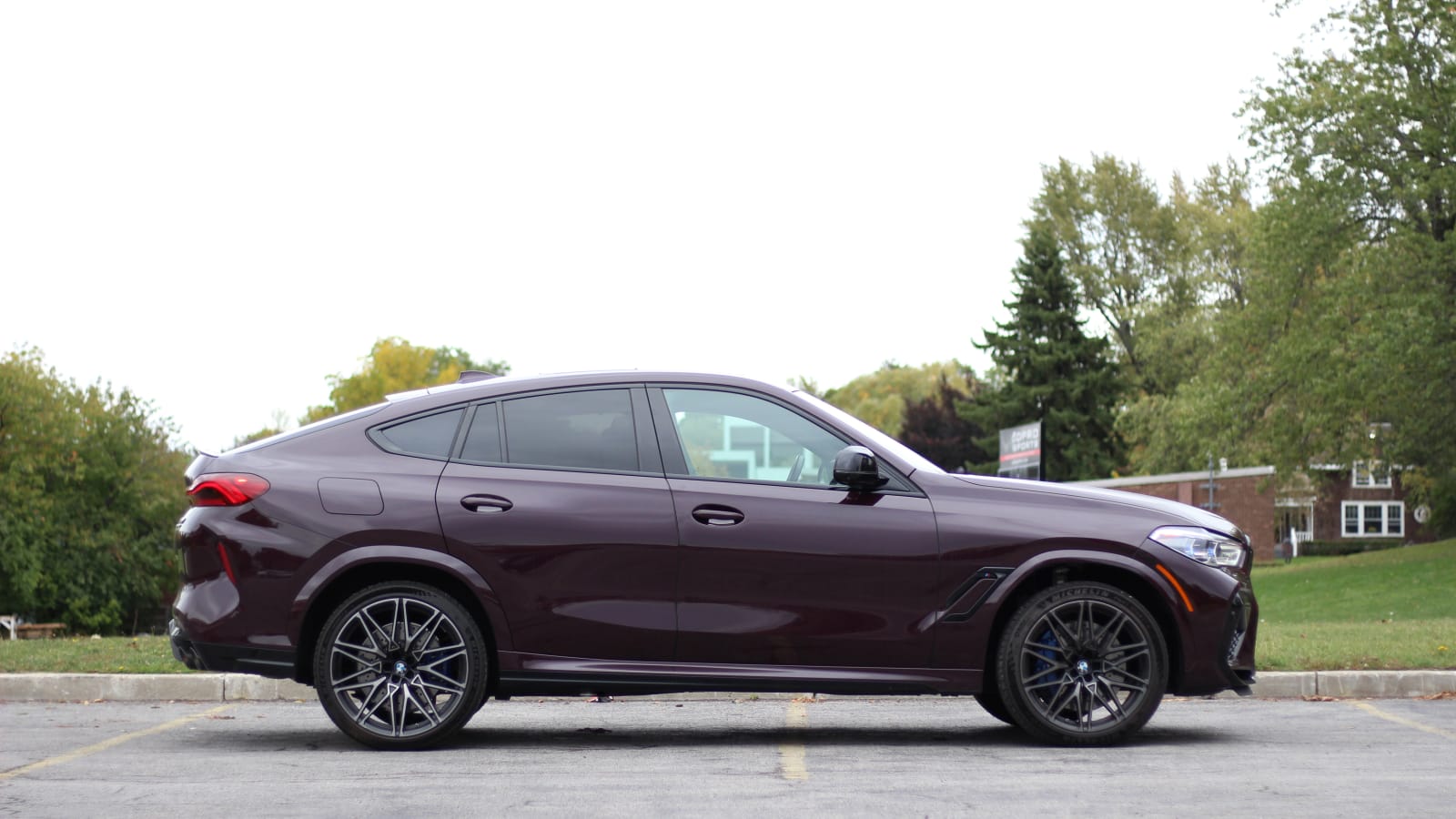 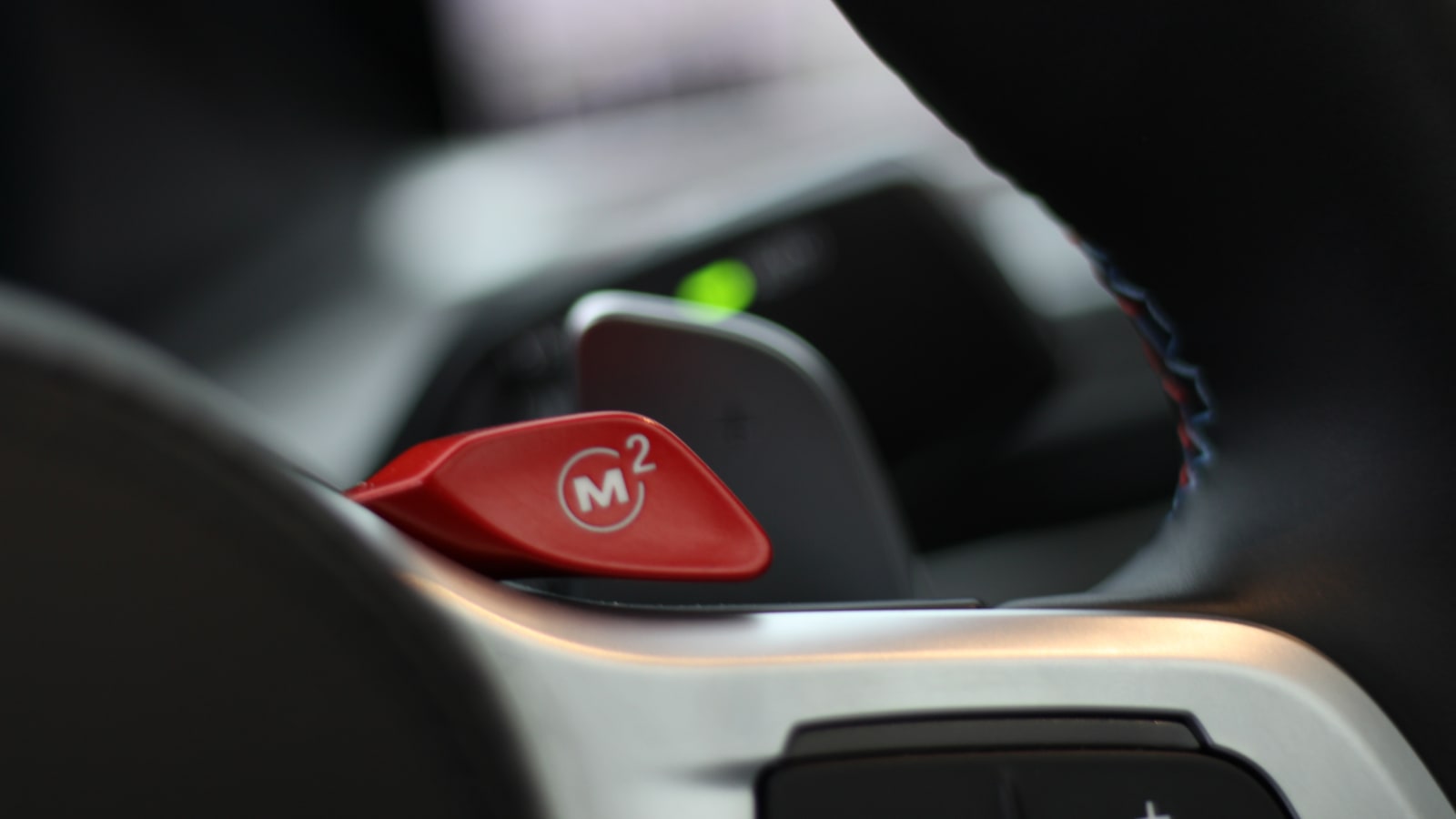 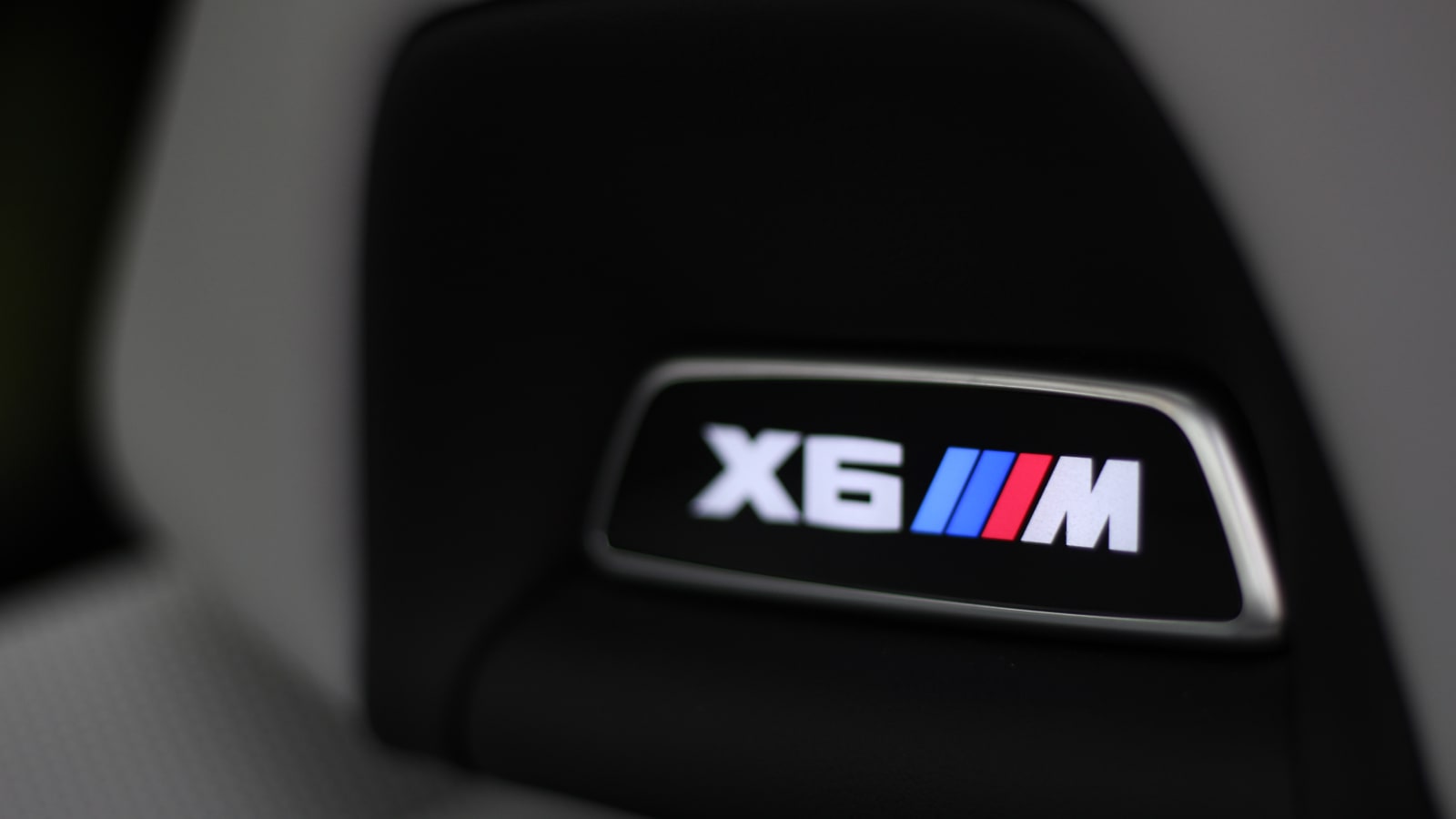 I was brutally easy on the throttle to see what kind of fuel economy I could eke out. It’s rated for a truly embarrassing 18 mpg on the highway (13 mpg in the city!), but I achieved 21.3 mpg averaging 65 mph. So, success? This big bruiser just isn’t meant for roads with American speed limits, or for anybody who cares about fuel efficiency. Accelerating onto onramps is a blast, but the fun ends quickly, as I’m already exceeding speed limits before most ramps even straighten out. This car’s M Driver’s Package lets it max out at 177 mph, which would be great for an autobahn. We don’t have those in Michigan, either.

At $131,745 as tested, a brand new X6 M Competition likely isn’t the only vehicle in your driveway. Its compromised shape and poor ride is less of an issue when you have something that’s actually sensible parked next to it. And when the snow starts falling, and the M4 goes away for the winter, why should the fun have to stop? Mobbing a high-horsepower SUV through a foot of snow sounds like suburban winter driving at its peak.

Actually, maybe we just stumbled into the most logical use case for the X6 M Competition. Still, sometimes cars don’t fit into neat, little boxes. This is one of them. I’ll still nudge anybody who is considering one to look at the X5 M Competition (or for daily use, the M50i), but since when is buying a six-figure SUV with a twin-turbo V8 a rational buying decision? Pick the one you think looks best. Just make sure to get it in purple.