The 2021 Hyundai Palisade is such a well-rounded and well-executed three-row crossover that the only thing preventing it from being declared a runaway best-in-class choice is that the mechanically related Kia Telluride manages to check off the exact same boxes. That people seem to gravitate more to the Kia’s design may ultimately tilt the scales in its favor, but it doesn’t change the fact that the Palisade objectively stands just as tall for its compelling blend of features, functionality, quality and a general lack of bad habits.

Now, you shouldn’t expect a fully loaded Palisade to come at rock bottom prices. This isn’t the Hyundai of old. However, it’s still value packed. For instance, its equipment level and pricing largely mirror that of the popular Honda Pilot, while offering more space, a more elegant interior and more warranty coverage. The Palisade also boasts more standard driver assistance features than any competitor (they’re well-executed, too) and ample easy-to-use infotainment features. Really, we could just keep going with superlatives, so let’s just leave it here and let you dig deeper below.

Hyundai has reorganized some features and packaging for 2021, but it’s the addition of the new Palisade Calligraphy that’s the biggest deal. This range-topping trim level comes with every available feature standard plus exclusive wheel and grille designs, special exterior lighting elements, leather-trimmed door inserts and a micro-fiber suede headliner. It is pictured above.

Thankfully, don’t need to get the Calligraphy to get a uniquely elegant cabin highlighted by a wide, Mercedes-like touchscreen panel, distinctive trim types and a center console that rises to meet the dash, leaving extra storage underneath. It’s both attractive and functional, and it can provide quite the “wow” moment if you’ve just come from test driving a Honda Pilot or Subaru Ascent – competitors that are well constructed but score a zero in charisma. The Palisade’s quality is also shockingly good, inching awfully close to genuine luxury territory (and that was our opinion before the Calligraphy was introduced).

Every Palisade comes standard with an 8-inch touchscreen, which is the upgrade unit in some other Hyundais. It’s easy to use, and thanks to the Palisade’s design, easy to see. A 10.25-inch widescreen unit is available on upper trim levels, much as it is in the Hyundai Sonata. You can devote the entire thing to one function, split it 70/30 between two (such as the navigation map and audio system information), or leave it on the home screen that shows three functions. It’s similar to what you increasingly see in various luxury brands, and it’s just as well-executed, if even a bit better, in the Palisade.

The Palisade also comes standard with a multitude of standard infotainment features including Apple CarPlay, Android Auto, satellite radio and five USB ports. An extra pair of USB ports is added to upper trim levels, which can also be outfitted with wireless smartphone charging, integrated navigation and an impressive Harman/Kardon surround sound audio system. Also shared with the Telluride is a rear seat mute function that easily disables the rear speakers (for sleeping kids, or those who don’t want to listen to your lame old music) as well as the Driver Talk in-car intercom system that transmits the driver’s voice to those sitting in the back. 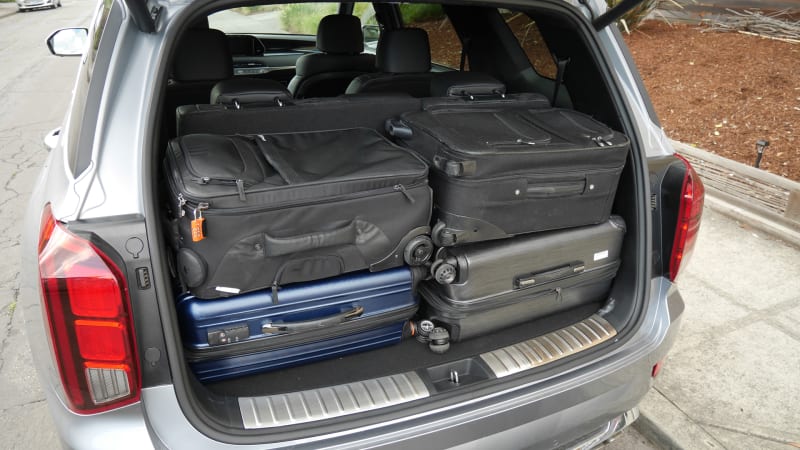 How big is the Palisade?

The Palisade is one of the largest three-row crossovers. Few are as long and wide, while third-row leg- and headroom are among the most generous in the segment. Even a tall adult can fit back there quite comfortably. Better still, the large rear quarter windows and the wide, upright vehicle sides means that whoever sits back there won’t feel too claustrophobic. Access to the third row benefits from one-press power release buttons, as well as unique grab handles integrated into the C pillars, but the resulting gap between that pillar and slid-forward seat is merely average. The second row offers a standard 60/40-split bench seat that results in an eight-person overall capacity, or captain’s chairs that reduce capacity to seven. Space and comfort are excellent with either, but that’s to be expected in this segment.

Cargo capacity is also better than most, at 18 cubic feet behind the raised third row, which is enough to fit four sizable suitcases. Only the Volkswagen Atlas has swallowed more in our testing, though we suspect the boxier Telluride might as well. There is 45.8 cubic feet when the third row is lowered, and 86.4 when both rows are lowered – both are pretty average for the segment, which is just fine. The second row features a standard power-folding release, while a fully power-operated third row is optional on the SEL and standard on the Limited.

Finally, storage for small items is a stand-out Palisade feature. The front center console has a sizable under-armrest bin, and there’s another bin forward of that one covered by a sliding cover that houses the wireless smartphone charging pad (if so equipped) and nifty cupholders pictured below that disappear to free up extra space when not in use. Then, there’s an expansive space under the console big enough for a purse, plus decently sized door bins and lots of back seat cupholders.

Every Palisade comes with a 3.8-liter V6 engine that produces 291 horsepower and 262 pound-feet of torque. Front- or all-wheel drive are available, and an eight-speed automatic is standard. The towing capacity is 5,000 pounds on every Palisade. A class III hitch and an auto-leveling rear suspension are optional.

EPA-estimated fuel economy is 19 miles per gallon city, 26 mpg highway and 22 mpg combined with front-wheel drive. All-wheel drive only lowers those estimates to 19/24/21.

Much like the Kia Telluride that shares its mechanical underpinnings, the Hyundai Palisade offers a well-rounded driving experience free from bad habits but also bereft of anything particularly memorable. Effectively, it reaches the bar set by the vast majority of buyers in this segment. The V6 engine produces plenty of power, but ultimately produces acceleration on-par with most other vehicles in the segment. The steering is precise and gains a little extra effort when in Sport mode, but it also doesn’t keep you particularly engaged in the driving experience. Similarly, the suspension capably controls body motions and the stock tires do a good job of gripping pavement (or even loose gravel). Those looking for more of a car-like driving experience should visit their local Mazda store for a CX-9.

The Palisade’s available all-wheel-drive system has a function that locks the front/rear power distribution at 50/50 for added traction while off-roading. We found it capable enough driving on a lengthy gravel road with plenty of tight turns. However, its 7.9 inches of ground clearance is unremarkable, and unlike several competitors, the Palisade doesn’t offer any sort of off-road driving modes. But its AWD system should provide some peace of mind in slick or snowy conditions.

What more can I read about the Hyundai Palisade?

We take a closer look at the Palisade’s Limited trim level, focusing on infotainment and driver assistance technology features, plus its general performance during a family road trip. 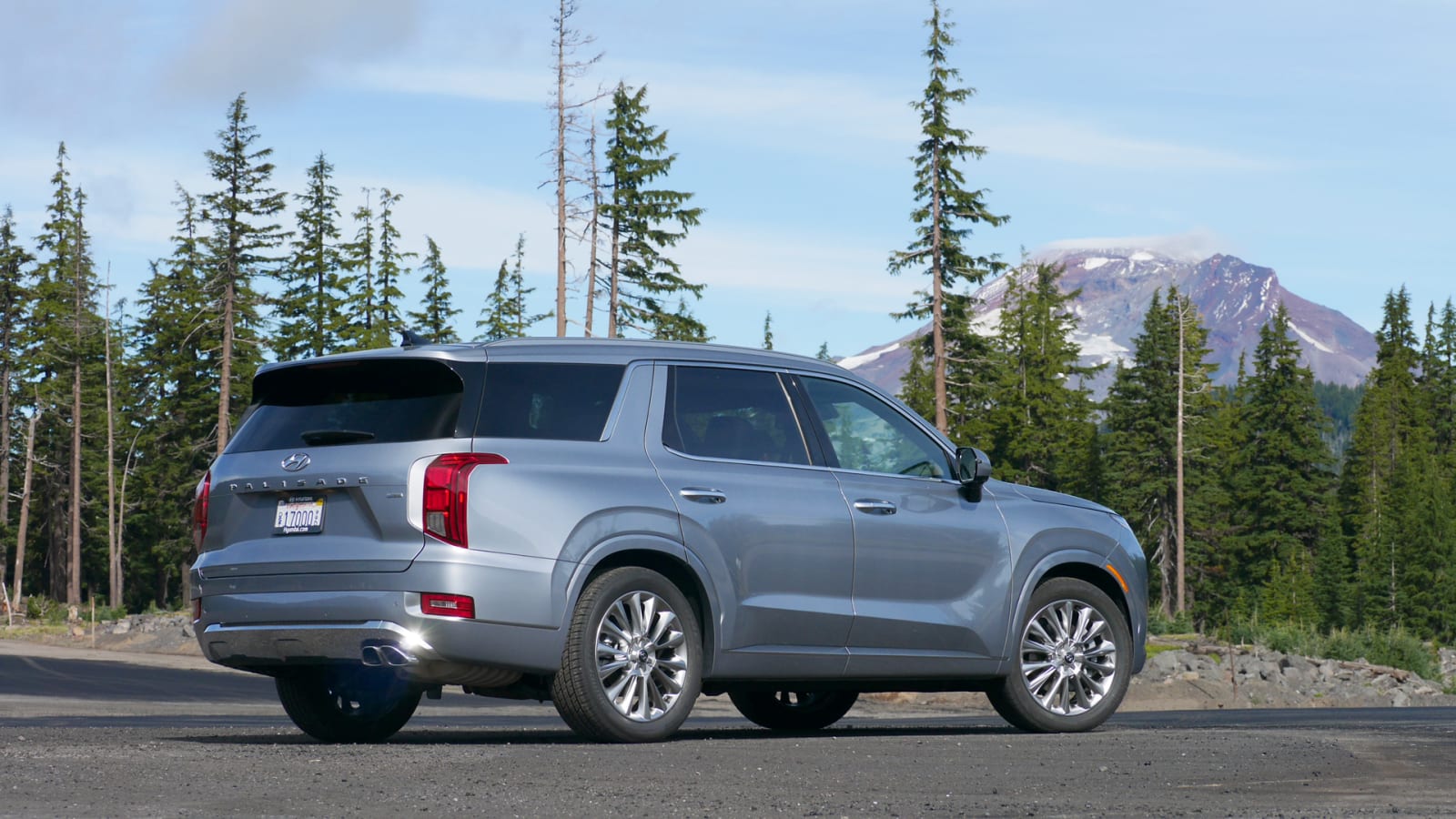 2020 Hyundai Palisade | How much fits behind the third row?

We put the Palisade’s cargo area to the test by trying to stuff as much luggage as we can behind its third row, as well as how much seating capacity remains when you stuff all of our luggage inside. 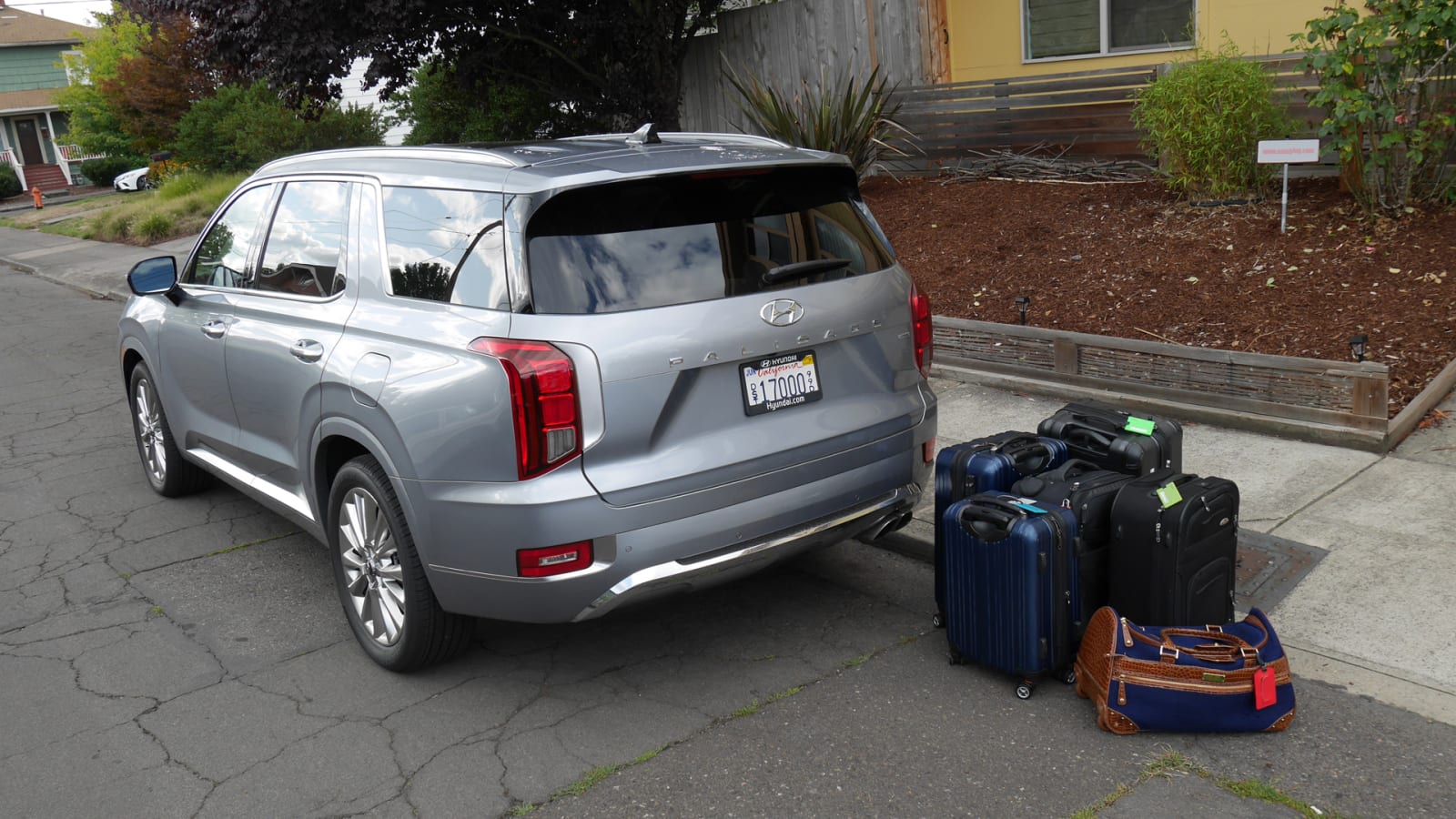 Our first full test of the Palisade on American roads, including in-depth information about its design and engineering. 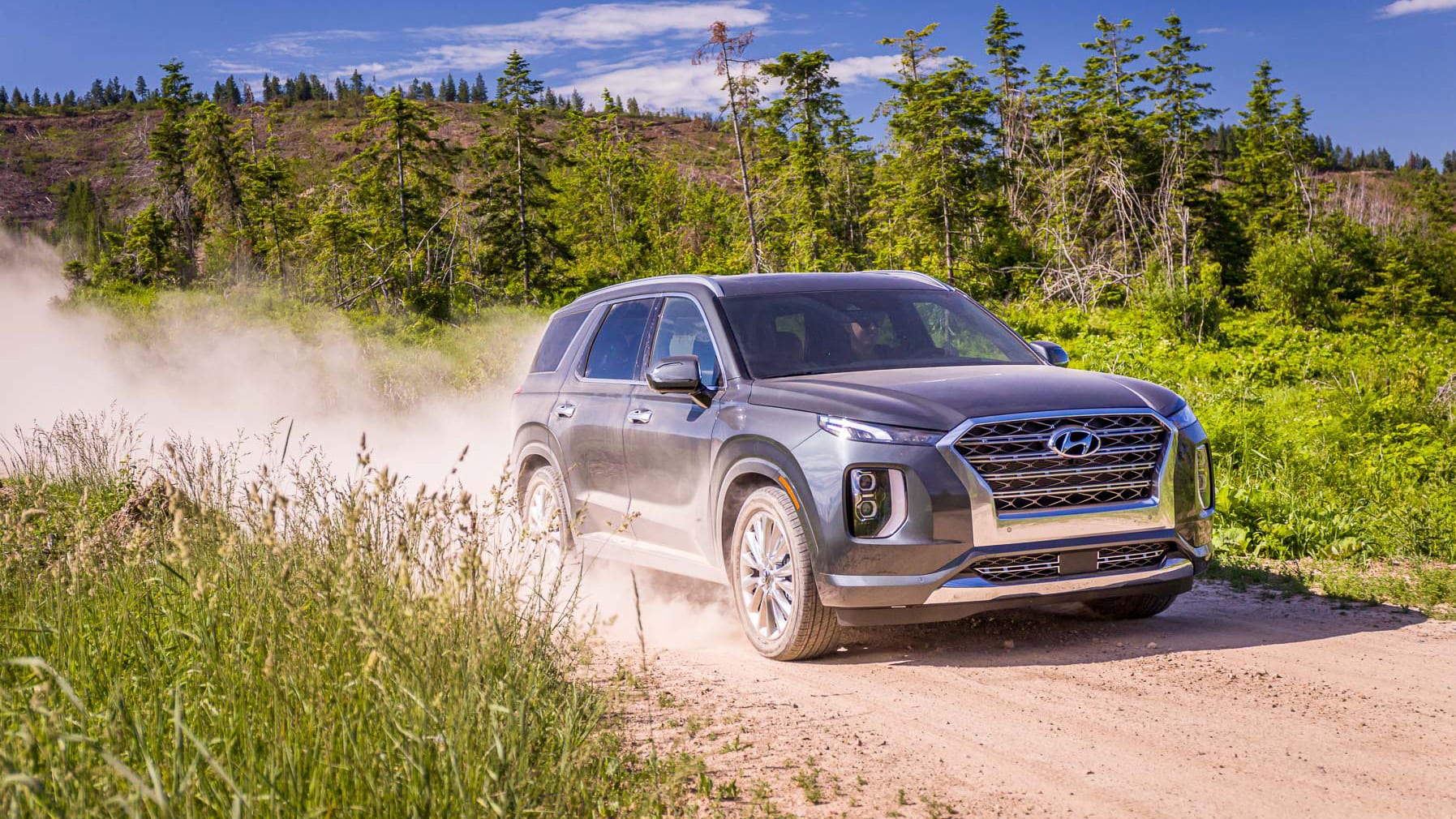 Pricing starts at $33,665, including the $1,140 destination charge, for the base front-wheel-drive Palisade SE. All-wheel drive is a $1,700 option on all trims but the Calligraphy, where it is standard. Only the SEL offers factory options by way of two packages.

For $2,650 more, the SEL adds many worthwhile features, including blind-spot warning, roof rails, a sunroof, a power driver seat, heated front seats, a leather-wrapped steering wheel and dual-zone automatic climate control, seven USB ports, plus fancier interior trim. You also get second-row captain’s chairs, although unlike the Limited and Calligraphy, you can keep the SE’s bench and therefore eight-passenger seating.

Extra luxury equipment is added either through the SEL’s Convenience and Premium packages, or by stepping up completely to the Limited and Calligraphy. You can find a full breakdown of these features plus specs and local pricing here at Autoblog. Among the upgrades is a blind-spot camera system that beams a view from the vehicle’s side into the instrument panel (pictured above). That, in addition to the typical array of blind-spot warning lights and chimes creates a layered approach to safety that makes sense and works well.

The Palisade received a perfect five stars from the government for overall, side and frontal crash protection. It was named a Top Safety Pick by Insurance Institute for Highway Safety for its best-possible crash protection and crash prevention scores. The headlights on the SEL and Limited trim levels also received the best-possible rating of “Good,” thought the base headlights got a second-out-of-four rating of “Marginal.”