Toyota has had something of a performance car revival over the past few years. It has released the Toyota 86 and Supra sports cars, and has even developed TRD versions of the Camry and Avalon. Things are even more exciting overseas with the wild, turbocharged, all-wheel-drive Yaris GR, which will reportedly spawn a fast Corolla for the United States. In the meantime, Toyota has spiced up its humble compact sedan with the 2021 Corolla Apex Edition.  It’s a limited edition with an aggressive body kit and chassis upgrades. Unfortunately, while it looks cool, it’s frustrating to drive and expensive for what you get.

So what exactly do you get with the Apex? On the outside, the Apex picks up a unique body kit incorporating a front spoiler, side skirts, and an aggressive rear diffuser, all in gloss black. The trunk spoiler is optional and costs $375. These parts all match the pearl black roof and mirrors, as well as the 18-inch alloy wheels. Toyota claims the wheels are designed to aid brake cooling, and each one weighs 2.2 pounds less than the equivalent wheels for the regular SE and XSE Corollas. The Apex also features bronze accents and LED lighting, and a rear spoiler is available as an option. Inside, not much has changed, but each car gets unique upholstery, cloth for the SE and leatherette for the XSE, with bronze-colored contrast stitching. It’s a mean, sporty-looking thing, and conjures up images of Scion’s glory days.

But what really makes the Corolla Apex appealing are its performance upgrades, which are all focused on improved handling. Stiffer springs and shocks lower the car by 0.6 inch and help reduce body roll. Solid anti-roll bars also contribute to making the Apex corner flatly, and the bumpstops have been changed in an effort to keep the ride tolerable. Steering is also retuned for a more natural build-up of resistance when turning. All-season or summer tires are available for the aforementioned light wheels.

The powertrain is completely unchanged save for a cat-back exhaust that adds a bit more noise. The naturally aspirated 2.0-liter four-cylinder still makes 169 horsepower and 151 pound-feet of torque. A six-speed manual is available, and it even has rev-matching for downshifts, though that’s shared with the regular Corolla. Sadly, you’ll be hard pressed to find one: only 120 of the 6,000 Apex models built will have a manual. The rest get the CVT, as did our test car.

On the road, the Corolla Apex’s suspension mods are extremely obvious, for better and for worse. When hustling it down back roads or curvy on ramps, you’ll be impressed by the near lack of body roll and solid grip. It’s a stiff chassis, too. But before you get to those twisty roads, you’ll be miserable for the entire stretch of straight commuter roads that are bound to be blighted by imperfect pavement. The cabin is kicked and crashed over abrupt bumps, and the whole car jiggles and bounces over waves and dips. It seems like the team in charge equated hard suspension with sporty suspension, and that simply isn’t the case.

This uncompromising chassis character is also at odds with the powertrain and steering. The CVT is the biggest problem, as it falls prey to CVT stereotypes such as rubber banding between rev ranges, and holding high revs under full throttle. This is an issue because the engine is a bit coarse when it’s being thrashed. And now you hear it more because of the cat-back exhaust. 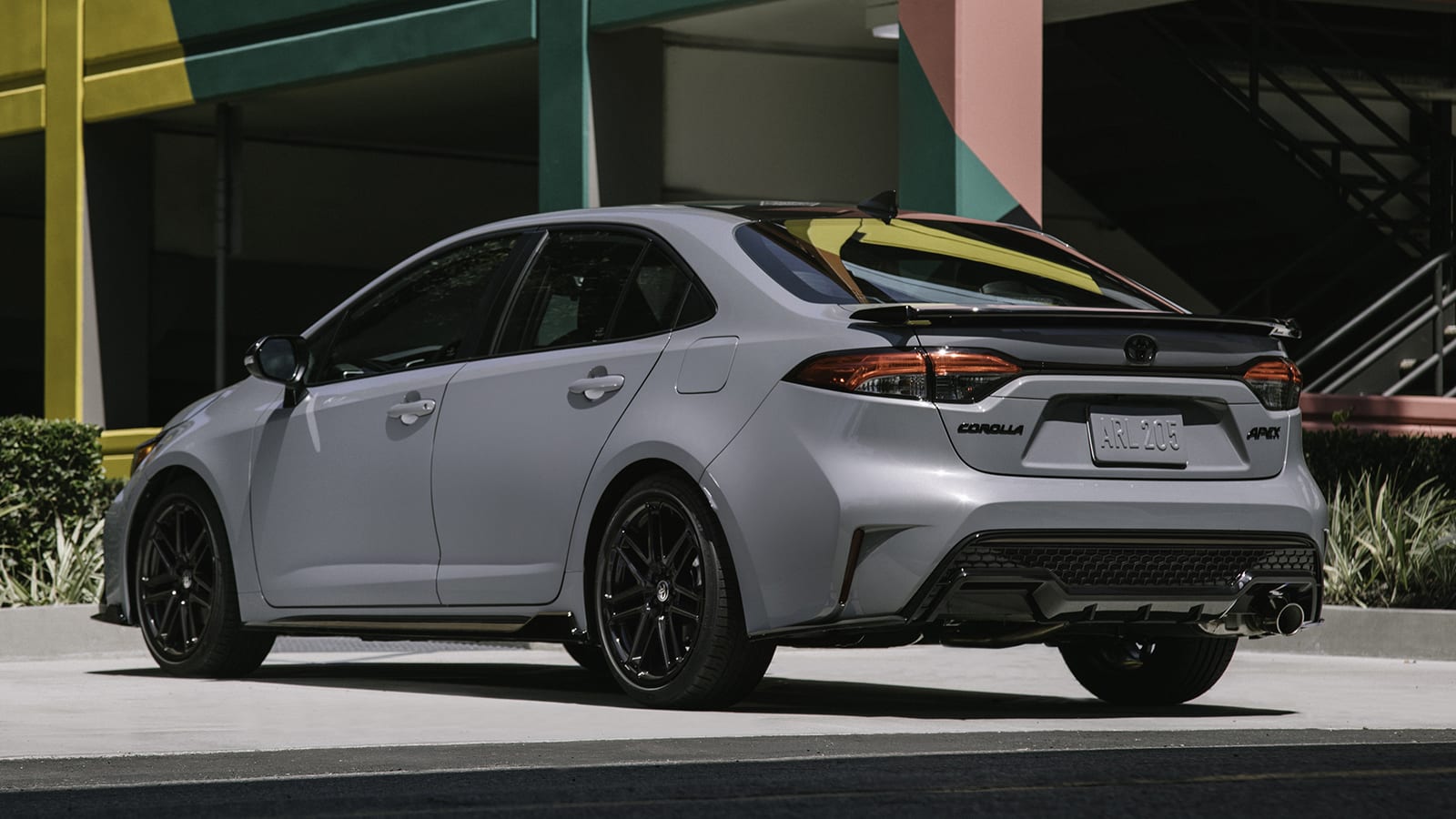 Shifting through 10 artificial gears with the paddles doesn’t improve things since it’s slow and slushy when changing “gear” ratios. Going with the manual would make things significantly better, though you’d still be left with just 169 horsepower, which is well below the at least 200 horsepower of sporty compacts like the Honda Civic Si, Kia Forte GT and Hyundai Elantra N-Line. And the steering is disappointing, too. That it’s weighted is fine, but it’s missing any useful feedback, and the ratio is sluggish. It feels like an economy car helm with racecar suspension.

Things get worse when you look at the price tag. The Corolla Apex starts at $26,065 for the SE trim with a CVT. Adding the manual transmission brings it to $26,455. Moving up to the XSE model, which is CVT only, adds heated power seats, leatherette upholstery and a price tag of $29,205. That’s about $2,500 more than the Kia Forte GT, and basically even with the Honda Civic Si, both of which offer more power and have a far superior ride and handling balance. The Civic Si also offers performance perks such as a mechanical limited-slip differential and electronically adjustable shocks. And on the comfort side, the Forte GT is available not just with heated power seats, but ventilated seats, as well as wireless phone charging. When so equipped, the Kia is still nearly $4,000 less than the comparable Apex XSE.

It might look good, and it does have a modicum of exclusivity, but the Toyota Corolla Apex doesn’t make sense for anyone. For someone looking for a high-feature commuter, it will be miserably uncomfortable. For someone wanting a sporty car, they’ll be stuck with a frustrating CVT, a relatively weak engine and the knowledge they could’ve had something more exciting and a better daily driver. And it’s too expensive for everyone.