The 2021 4 Series is a ground-up redesign of BMW’s long-running, two-door compact. While the days of it simply being referred to as a 3 Series coupe may be well behind it, the fundamentals of the formula have not changed. Everything from the chassis up is clean-sheet, and in executing this overhaul, BMW appears to have addressed the biggest shortcomings of the previous generation.

There’s only one thing holding us back from calling the 4 Series an across-the-board upgrade. Yeah, we’re referring to BMW’s aesthetic decisions. Beauty is in the eye of the beholder, but we’re having a hard time wrapping our heads around that front end and we’re definitely not alone. Maybe it would be easier if the nostrils weren’t the size of dinner tables. “Apart from that, Mrs. Lincoln …” the 2021 4 Series impresses.

Much like the 3 Series sedan, the 4 has grown quite a bit, gaining two inches of wheelbase and roughly five inches in overall length. BMW quite expertly kept the weight in check, though, with only the top-spec M440i (which we’re evaluating today) ticking up by about 100 pounds. Sadly, a few enthusiast-friendly variants are not returning. The rear-wheel-drive 440i got the axe, and there are no manual transmissions available anywhere in the hierarchy. We’ll give you a moment to pour one out.

While the cabin may not be as ostentatious as what you see in a Mercedes-Benz C-Class coupe, the materials are of high quality and all of the switchgear feels robust. It’s more luxurious in look and feel than the previous 4’s cabin, and given BMW’s penchant for offering somewhat ho-hum interior appointments, we’re pleased with this latest effort. But it’ll cost you.

Our loaner was loaded, and we do mean loaded. The M440i xDrive will set you back $59,495 (including $995 for destination) before you even look at any options. Ours came with the Drivers Assistance Pro package ($1,700), Executive package ($3,700) and the Cooling & High Performance Tire package ($1,500), along with a few other stand-alone options including the Cognac Vernasca leather and Arctic Race Blue exterior finish. All of that pushed the total up to a whopping $70,470. That’s M4 money.

In BMW’s defense, you do get a lot. Some of it — such as the gesture-based infotainment controls — is on the superfluous side, but between the whack of semi-autonomous driver aids and safety features, the borderline-overwhelming abundance of tech (including standard wireless Android Auto and Apple CarPlay for which you no longer have to pay a service fee), heated just-about-everything, and plenty of performance goodies, this punchy and agile coupe won’t leave you wanting for much – unless your ultimate goal is lap times.

That’s not to say the M440i isn’t quick. The 3.0-liter turbocharged inline-six produces 382 horsepower and 369 pound-feet of torque. With power going to all four wheels through a butter-smooth, eight-speed automatic, BMW says the M440i will hit 60 mph in 4.3 seconds. The M440i also gets the M Sport electronically controlled limited-slip differential, M Sport suspension and variable steering assist, and upgraded brakes with four-piston front calipers standard. All are optional on the 430i.

All variants of the new 4 Series also benefit from a new electrical architecture and a 48-volt mild hybrid assist system, which helps smooth torque delivery and improve auto-stop/start performance. The 430i sDrive (pictured below) is rated at 26 mpg city, 34 mpg highway and 29 mpg combined with the standard rear-wheel drive, or sDrive model. Switching to the xDrive model drops those figures to 24/33/27. The M440i has not yet been rated.

With just shy of 400 horsepower and a well-contained (by modern standards, anyway) curb weight of 3,977 pounds, the M440i xDrive packs a punch. Since there’s no rear-wheel-drive variant at this performance tier, the only way to get a slimmer 4 Series is to downsize to the 430i and its 255-horsepower inline-four. Yeah, it’s a significant drop in power, but it still hits 60 in 5.5 seconds. It also cuts 399 pounds off the 4’s curb weight – all of which is in the nose. The 430i xDrive splits the difference at 3,708 pounds.

On the road, the M440i offers just about anything you’d need. It’s quick, precise and predictable. BMW has taken heat for letting its driver interface systems (the steering, most notably) go to seed with the prior generation of the 3 and 4 Series models, and this latest effort feels like a massive step in the right direction. The 4 Series helm delivers more precision and inspires more confidence than its competitors do (including the Mercedes C and Audi S5). Only Alfa Romeo will give the BMWs a run for their money, but its Giulia is only available with four doors.

Our evaluation model was equipped with the stand-alone M adaptive suspension option to go with all of its other M goodies, and left to its own devices, it strikes a perfect balance between ride quality and ultimate capability. Dialing up the aggression in the drive modes comes at a price, especially if you don’t really need the extra edge. On the open road, the hit to ride quality and extra noise are trivial, but around town, there’s little sense in it. Then again, some drivers might prefer to scream from stoplight to stoplight at 20-plus MPH in first gear; we’re not here to judge…

Get the 4 Series out of town, and it’s more than enough car for just about any corner. It takes quite a bit to catch the BMW’s all-wheel-drive system napping, which makes for drama-free back-road bombing. You’ll approach the limits of the law long before you’ll reach the limits of the tires (Michelin Pilot Sport 4S in 225/40R19 up front and 255/35R19 out back), meaning you always have plenty of car in reserve should things get hinky. 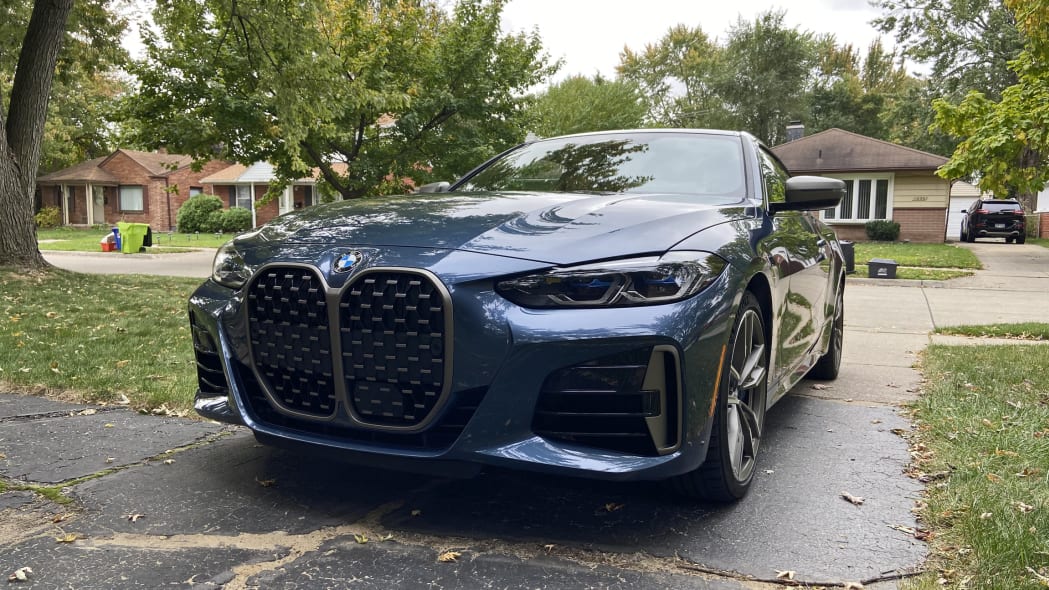 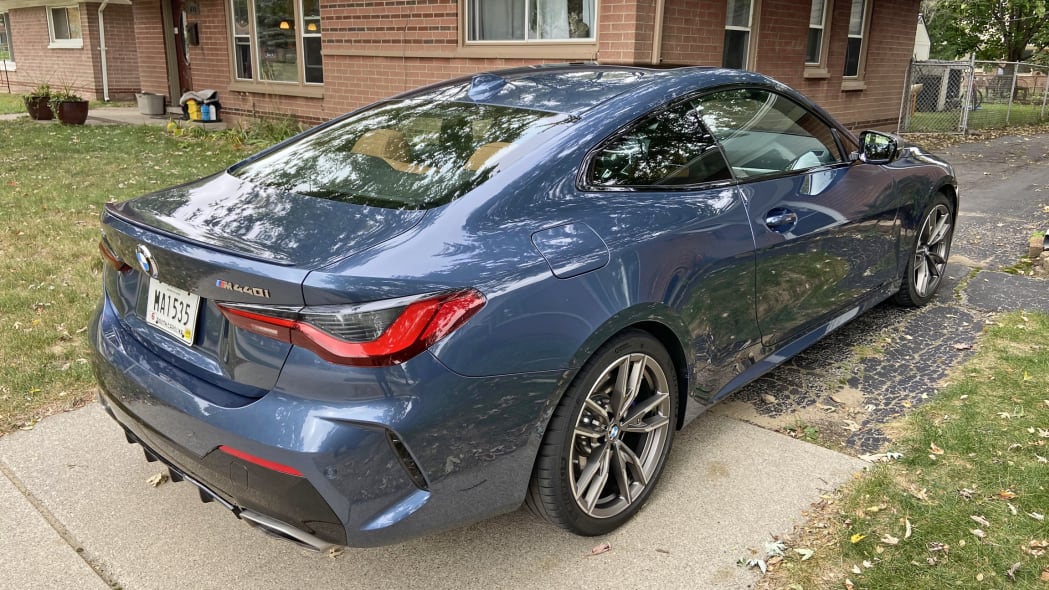 We were also pleased with the coupe’s cabin. Base cars get a 5.1-inch screen between physical gauges, but our loaner came with the Live Cockpit Pro option, which includes the 12.3-inch digital cluster and 10.25-inch infotainment screen. Both are intuitive and responsive, and the smartphone integration suites performed flawlessly in our brief testing. The leather sport seats are divinely comfortable and supportive, and adjust in just about every direction, even accommodating those of varying waist sizes thanks to the configurable bolsters.

BMW doesn’t always spec out its test vehicles with the company’s adaptive cruise control but this loaded-up model couldn’t escape that particular oversight, and it acquitted itself just about perfectly. BMW tends to firewall this option behind fairly expensive packages, so it’s still fine to skip it if you’re not a fan of the experience.

If your ideal luxury coupe is one that requires little forethought or second-guessing to drive quickly, in that, the 2021 BMW 4 Series excels. It’s not particularly lively or “soulful,” if you prefer the s-word, but it is exceedingly competent, comfortable and feature-rich. We’re not sure it’s worth plopping down $70,000 for a non-M offering (or its equivalents in this segment), so we’d probably be a bit more judicious with the build sheet, but shoppers can rest assured that the new 4 Series is very much a proper BMW. Just don’t look at it.