You hopefully saw the news today of GM’s introduction of its Connect and Cruise eCrate motor and battery package, which effectively makes the Bolt’s electric motor, battery pack and myriad other elements available to, ah, bolt into a different vehicle. It’s the same concept as installing a gasoline-powered crate motor into a classic car, but with electricity and stuff.

This, of course, got us thinking about what we’d stuff the eCrate into. Before we got too ahead of ourselves, however, we discovered that the eCrate battery pack is literally the Bolt EV pack in not only capacity but size and shape. In other words, you need to have enough space in the vehicle to place and/or stuff roughly 60% of a Chevy Bolt’s length. It’s not a big car, but that’s still an awful lot of real estate. There’s a reason GM chose to simply plop the pack into the bed and cargo area of old full-size SUVs. Well that, and having a rear suspension beefy enough to handle about 1,000 pounds of batteries.

So after that buzz kill, we still wanted to peruse the GM back catalog for classics we’d love to see transformed into an electric restomod that might be able to swallow all that battery … maybe … possibly … whatever, saws and blow torches exist for a reason.

Consumer Editor Jeremy Korzeniewski: If you’re going to build an electric conversion, why not do it with style? That’s why I’m choosing a 1971-1973 Buick Riviera. You know, the one with the big glass boat-tail rear end that ends in a pointy V.

Being a rather large vehicle with a big sloping fastback shape, I’m hoping there’s enough room in the trunk and back seat to pack in the requisite battery pack. That would likely require cutting away some of the metal bulkhead that supports the rear seatback, but not so much that a wee bit of structural bracing couldn’t shore things up.

The big 455-cubic-inch Buick V8 up front will obviously have to go. Remember, this was the 1970s, so despite all that displacement, the Riviera only had around 250 horsepower (depending on the year and the trim level). So the electric motor’s 200 horsepower and 266 pound-feet of torque ought to work as an acceptable replacement. 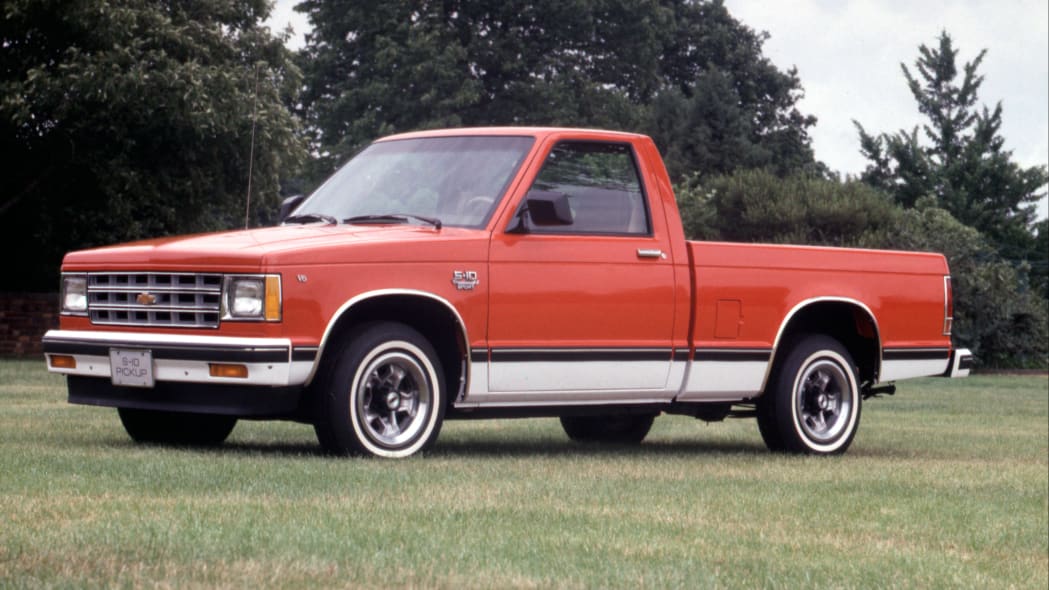 Associate Editor Byron Hurd: OK, so the name “E-10” is already taken by a completely different truck, but let’s not let labels get in the way of a fun idea. Fitting the battery pack underneath the bed might be a challenge, but it should fit somewhere or another, as we illustrated with the lead image on this article. Stick a tarp over it and call it done, right?

In all seriousness, I think something like this would make for an excellent utility runabout. I picked the 1982 because it was the first relevant image I found, but I’m certainly not married to that generation. Any straight frame will do, and I imagine it’s possible to find a clever way to mount that pack without completely robbing a compact pickup of all practicality. 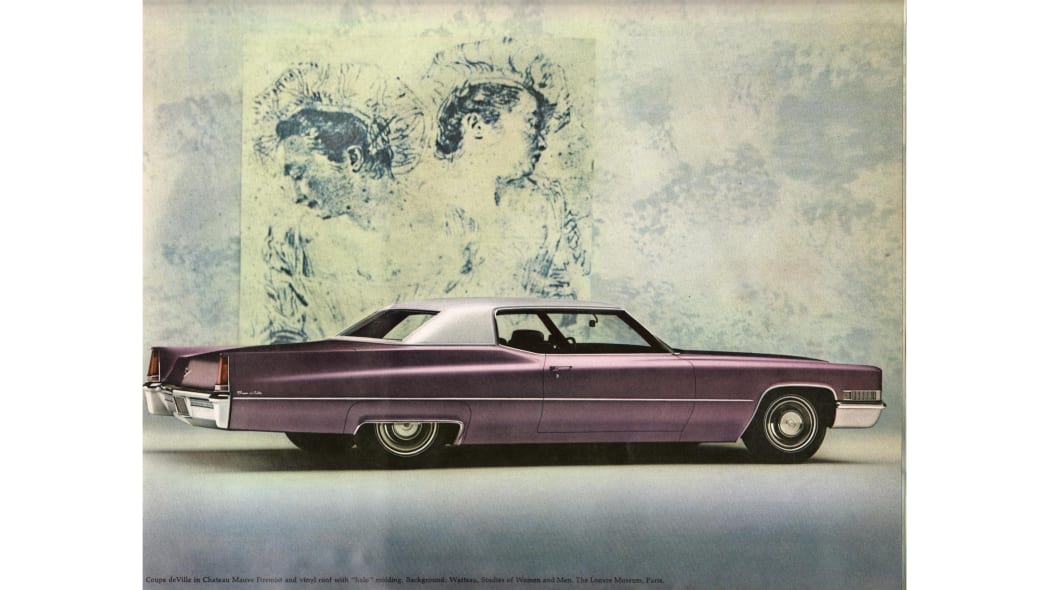 West Coast Editor James Riswick: I really wanted a ’67 or ’68 Eldorado, figuring “well, that has to be big enough and the lack of driveshaft or rear diff would have to make it easier to stuff in that Bolt battery pack.” Alas, it still doesn’t look like there would be enough room. That battery pack size is a real limitation. So let’s go up a size! Behold the 1969 Cadillac Coupe DeVille. If that doesn’t have enough length in the rear to swallow the battery, I’m not sure it’s possible in a car. Though not as much of a classic as the Eldorado, this Coupe DeVille is nevertheless one of the more restrained renditions of its nameplate. Now, would its 4,800-pound curb weight put a wee bit of strain on a motor meant for a car that weighs 1,200 pounds less? Almost certainly. It would definitely be comically slow. On the up side, you could get it in “Chateau Mauve Firemist and vinyl roof with ‘halo’ molding.” Ideally photographed with “Watteau, Studies of Women and Men” from the Louvre. So it’s fancy. And electric. It’s fancy electric. 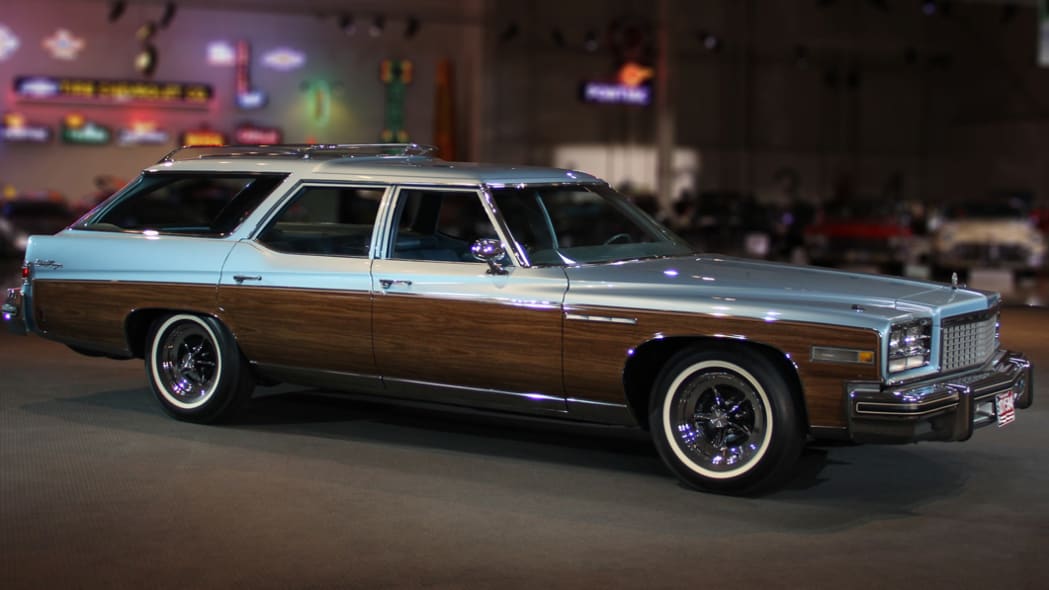 Contributing Editor Joe Lorio: I’d originally thought a four-door Chevy Chevette hatchback might be ideal as it could be touted as The Return of the Electrovette (GM made a couple of EV conversions of the Chevette back in the day). But even with the rear seats folded, the load floor of the ‘Vette is just 60 inches long, which seems not enough to house the Connect and Cruise battery pack. So I did a complete 180, and am proposing a ’76 Buick Estate Wagon.

GM’s giant “clamshell” full-size wagons from the ’70s (the biggest ever built) surely would have enough space to house the battery pack, even if it meant removing the third seat. And the original 455-cubic-inch boat anchor in this baby made only 205 smog-choked horsepower, so not much more than the e-motor — although its torque output was considerably higher. This re-powered wagon, then, might not be so quick. But it has miles of style and acres of fake wood. Call it the E-lectra Estate Wagon and take it to SEMA. 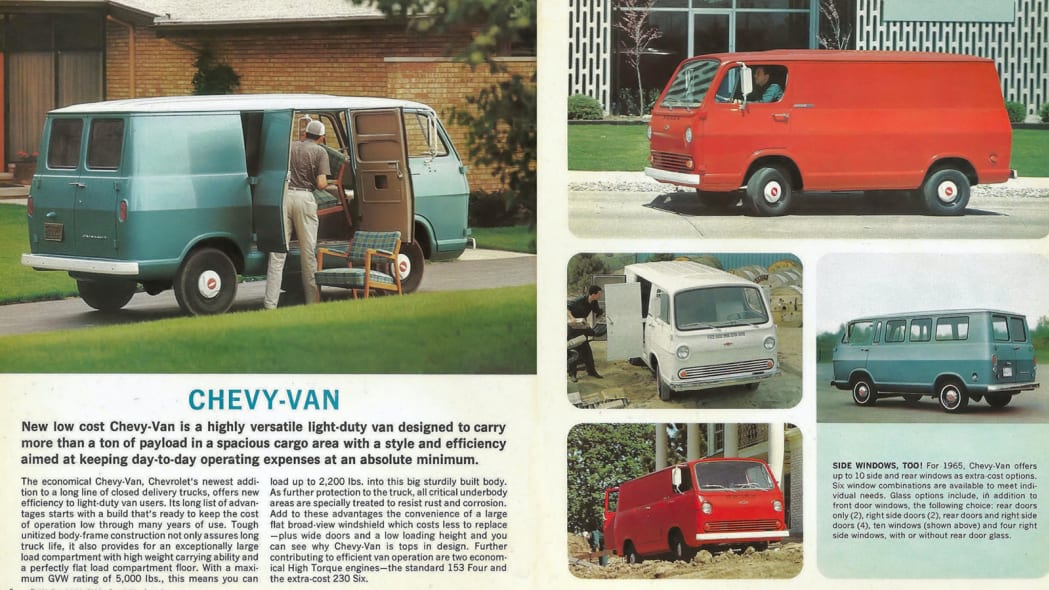 News Editor Joel Stocksdale: Practical nonconformist that I am, I was contemplating what sort of classic Chevy would have the space and robustness to carry a big battery pack, but wasn’t just another pickup truck or wagon. And it hit me that a van would be perfect. Sadly, a Corvair van wouldn’t be particularly convenient for the upcoming Chevy eCrate package with its rear engine setup. But it was succeeded by a similarly funky van simply known as, the Chevy Van or G-Series Van. From 1964 to 1970, the Van featured a nifty flat-nose design not unlike the old Corvair, the VW Bus, Ford Econoline or Dodge A-Series van. I’m a bit more taken with the earlier design with the high-up headlights and stubbier length, but I certainly wouldn’t turn away the later ones.

Converting one shouldn’t be terribly difficult. Despite the shape, the engine is up front between the front seats and sends power to the rear through a traditional transmission and solid rear axle. As such, that should be perfect for the eCrate motor and transmission pairing. The Chevy Bolt motor is likely more punchy than the straight six and V8 engines originally fitted to the G-series Vans, so it should be more fun to drive. And with a low load floor, it will be easy to add the battery while maintaining loads of cargo space, and maybe even room for a set of rear seats if I want. 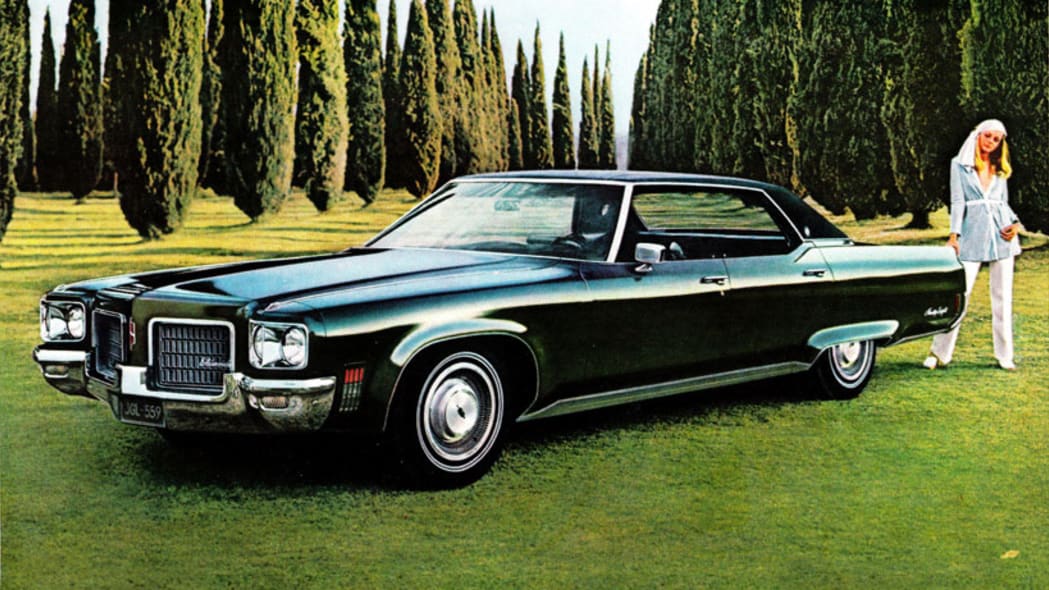 Senior Editor, Green, John Beltz Snyder: This might be a disaster, but I’m going with the ninth-generation Oldsmobile 98 for three reasons: It’s an Oldsmobile, it’s long as all heck and it looks sweet. I could probably place the battery pack in the trunk with some intrusion into the back seat, which is OK, because I can seat three in the front bench. (If anyone reading this has access to a 98 of this era, kindly take a measurement of the trunk and rear seat area.) I would have to assume the V8 had already been plucked from this example to live a better life in something else — I don’t think I could sleep at night after ripping a working 455 Rocket out from under the hood. Hopefully the 200 horsepower would be enough to move this big beast around. I’d almost certainly need to beef up the rear suspension.

Yeah, this is probably a horrible idea. Maybe I’ll just wait until GM can crate out its much more modular Ultium batteries. Then I could find a way to package it into the third-gen Cutlass I really want. 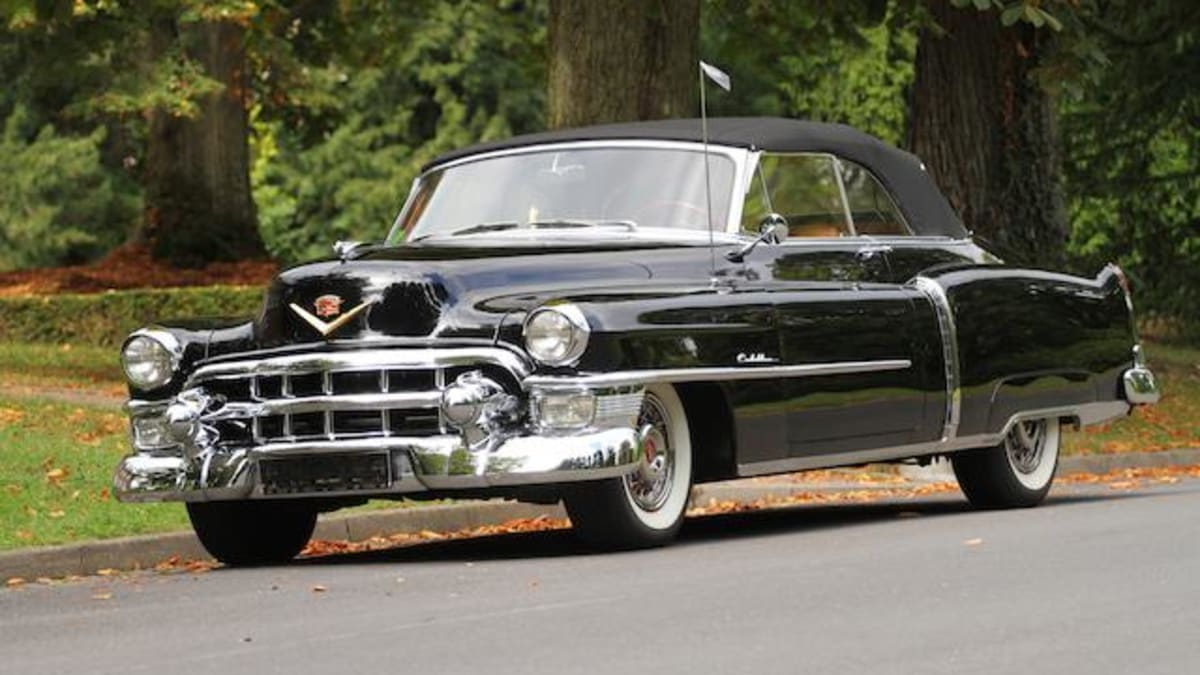 Editor-in-Chief Greg Migliore: GM has a tradition of converting interesting classics to electric power for SEMA (virtual this year, naturally). It’s one of the cooler parts of the show, second only to the open bar Mopar stages after its press conference. For my pick, I’m playing from the back of the deck with the 1953 Cadillac Series 62. Autobloggers like to chide me for my throwback picks for these lists, usually with a line like, Grandpa Migliore needs to get his entry in. Well this one from Great Grandpa.

This Eisenhower era luxury coupe measures nearly 221 inches, which is longer than a modern Escalade. It might take some creativity to wedge in the eCrate components, but there’s a lot of room to work with. I like this period in Cadillac’s history. It reflects the post-war exuberance with jet-age styling, and the Series 62 was the first Cadillac to get fins in 1948. Aesthetically, this era of GM Design holds up well, nearly 70 years later, especially with the long hood and curved fenders. Yes, the grille looks like it’s about to torpedo you, but that’s real chrome.