Subaru isn’t top of mind when we start talking about the best infotainment systems, and after using the Starlink system in our long-term 2019 Subaru Forester for months, we still think Subaru is mid-pack.

The best aspect of the 8.0-inch touchscreen infotainment system in our Forester is its simplicity. You couldn’t ask for a more basic layout and software experience on this screen, and while that’s not the case for the upper second screen, most of your core vehicle functions are handled on the lower one. We’ll note that both the Subaru Outback and Legacy have newer, larger screens available that we’ll also go over later in this review. The Impreza, Crosstrek and Ascent offer up a similar experience as this Forester does.

All your essential app tiles like Radio, Map and Settings can be found in the customizable home screen. The lack of apps and extra gizmos means there isn’t much to customize, though. Subaru uses a bright variation of colors for its various app tiles. It doesn’t come off as especially professional or classy, but it gets the job done and makes picking them apart from each other easy. Features like navigation, in-car WiFi, basic voice commands, Apple CarPlay and Android Auto are all accounted for. Subaru is still using wired CarPlay and Android Auto, as most non-luxury brands do, so you’ll need to bring a plug along to connect.

Our biggest gripe about the screen is its general sluggishness. You’ll get to where you want to go, but it takes a beat longer than most. Swiping across screens and scrolling through menus is always accompanied by a touch of lag. Even the smartphone connection experience is affected by the screen’s lack of response. On some occasions, a light touch or swipe will do. On others, you really need to put some pressure behind your touch. It’s nowhere near smartphone standards, but then again, many infotainment systems haven’t caught up to those speeds yet.

The best part of the screen is its ability to take presses and swipes made with winter gloves. You can keep your hands warm and switch the radio station at the same time, which is always a nice convenience.

Now, back to the second screen we mentioned earlier. Subaru puts this second screen in a number of models (Impreza, WRX, Crosstrek, Forester and Ascent), but it depends on the trim you select. For example, only the top trim Crosstrek and Impreza get this color screen, while all but the lower Forester and Ascent trims have it. If you get a Subaru without it, a more basic readout is placed in the same spot that displays a clock, climate info and trip information.

Toggling through modes with the color screen is done via the “INFO” button on the steering wheel, which just isn’t very intuitive considering the screen’s location in the center by the windshield. You can get useful off-road information, media descriptions and driver assistance systems status on the screen. It doesn’t add much to the experience, but it doesn’t hurt it either. The worst part about it in the Forester is that you have to set up the Driver Monitoring System up there. It takes forever, but Subaru fixed this in the Legacy and Outback by allowing you to use the massive touchscreen to configure it. 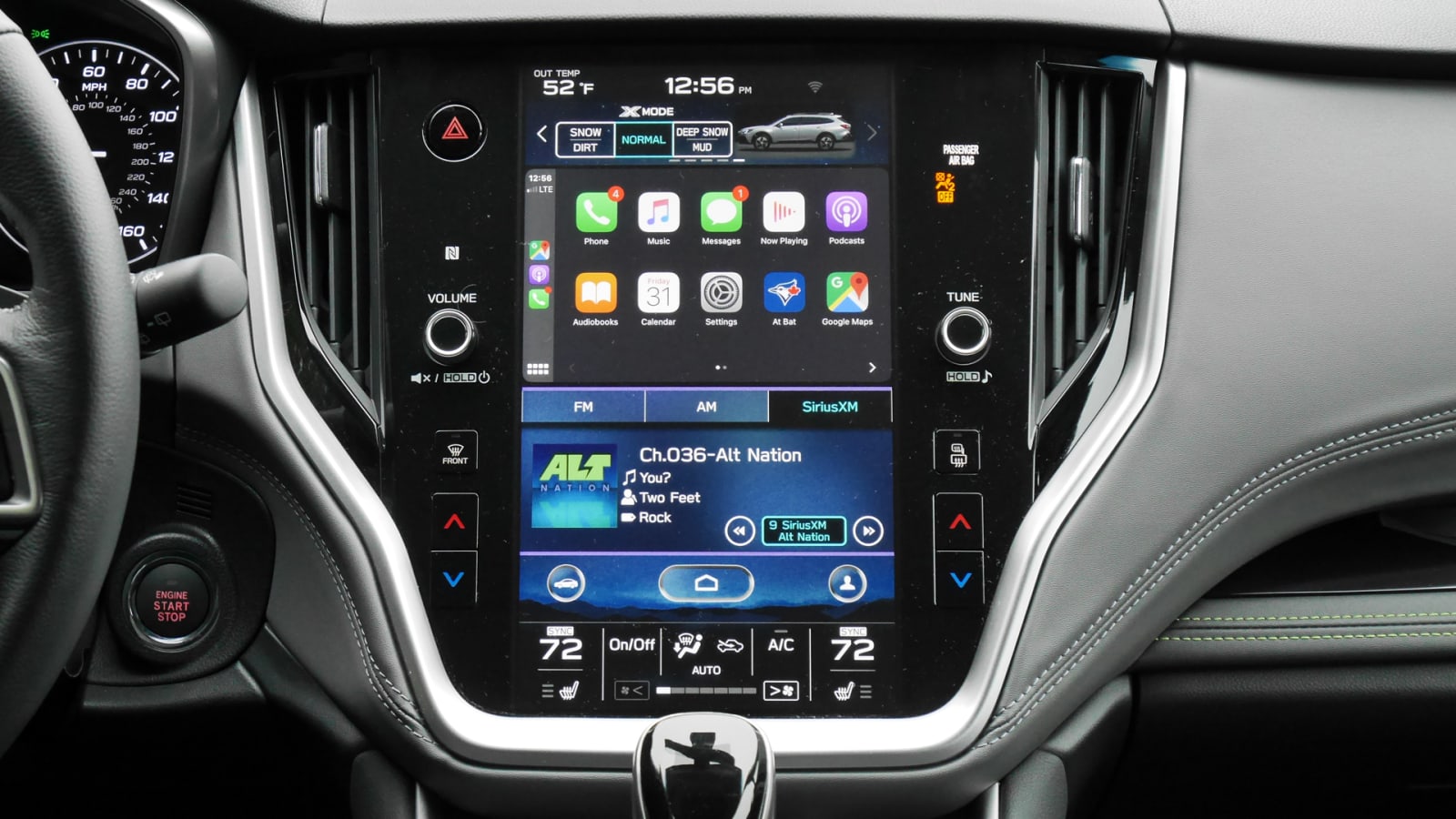 The 11.6-inch vertical screen found in most versions of the Legacy and Outback is different in a few ways (base trims get a pair of 7.0-inch displays stacked on top of each other that don’t look anywhere nearly as elegant). It dominates the dash, and the top screen is deleted. You can run two apps at once, essentially allowing you to put AppleCarPlay or Android Auto in the top spot and a native Starlink app in the other. It’s not as useful (particularly the audio controls when it’s delegated to the bottom screen) as Ram’s more content-heavy 12-inch screen, but Subaru does take advantage of the extra real estate. One thing lost with this screen are physical switches/controls for the heated/cooled seats. Subaru requires you to make a couple screen taps to turn those on, and the screen’s slow response frustrates at times. That said, it is smoother and quicker to respond than Subaru’s smaller screens.

If you’re someone who wants something that’s just easy to use without frills, Subaru’s infotainment system will appeal to you. The inclusion of physical controls and dials for climate temperature and audio playback is fantastic, and that’s something that even the 11.6-inch behemoths used in the Legacy and Outback do.