Although the current generation of Mercedes-Benz E-Class launched in 2017, the luxury sedan has remained a class leader. And even Mercedes seems to be in agreement that not much needed to change for the mid-cycle refresh. The 2021 E-Class received only some cosmetic and tech changes across the line, and the only major mechanical changes were applied to the six-cylinder E 450, the subject of our review. The tweaks have generally made the already excellent sedan just that much better.

Exterior changes are small but effective. The front fascia has downward tilted headlights and a broad, frowning grille for a meaner demeanor. It also echoes sportier AMG models, as do the dual power domes in the hood. The tail sees the biggest visual changes with a switch to thinner, horizontal taillights from the previous model’s taller, more pod-like units. The change lifts the tail and makes it look a little longer, and the whole car has a slightly better balance. It also brings it more visually in line with the all-new S-Class. 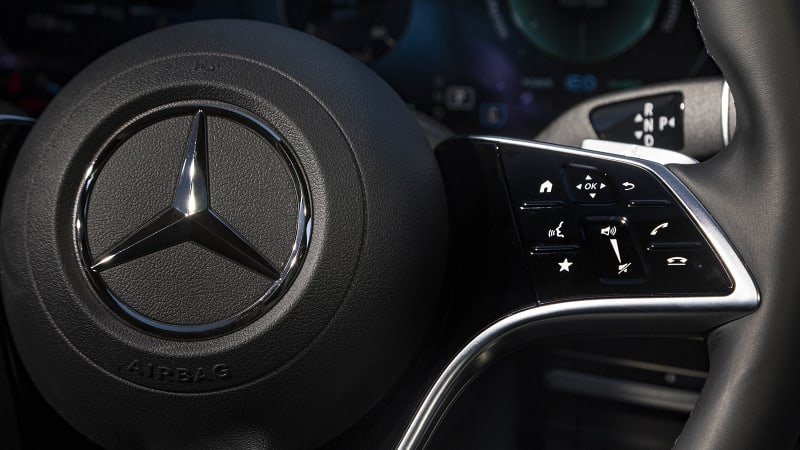 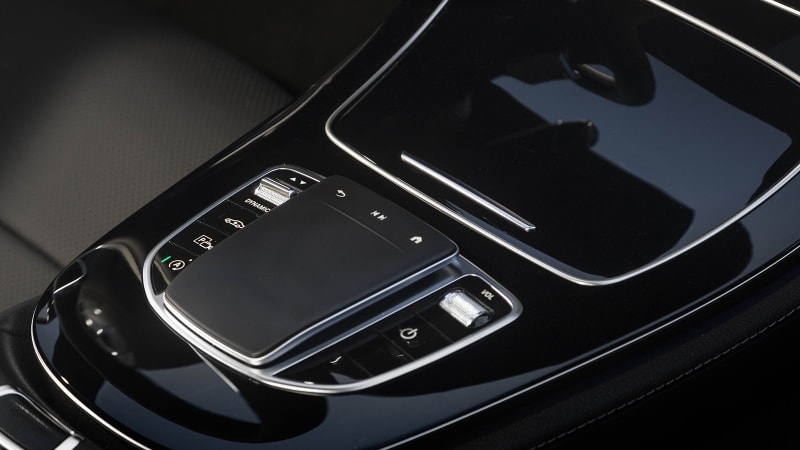 Inside, there are new steering wheel designs with small round centers and thin, modern spokes that feature fully touch-sensitive buttons for the infotainment system, which is upgraded to the full MBUX experience. That means the center console control hardware has been upgraded with the leather-like touchpad (the old rotary knob residing under a glossy black touchpad is gone), while the dual 12.3-inch infotainment and instrument screens become standard. Besides the hardware, the E-Class also gets MBUX’s natural speech voice controls and available augmented reality navigation assistance. The latter overlays navigational information on the forward camera feed to clearly point out streets and turns.

Driver assistance technology gets an upgrade to Mercedes’ latest-and-greatest as well. The optional Driver Assistance Package is enhanced with forward collision prevention that works around corners, blind-spot monitoring for those exiting the car, and an upgraded adaptive cruise control that will adjust speed based on roads, speed limits and traffic.

E-Class engines carryover for 2021 with the exception of the E 450’s, so this is where we’ll really start digging into what this car is like. The old turbocharged 3.0-liter V6 has been swapped in favor of a turbocharged 3.0-liter inline-six. Output is identical between the two engines at 362 horsepower and 369 pound-feet of torque, but the swap makes possible the introduction of a 48-volt mild-hybrid assist system with a starter/generator that produces 21 horsepower and 184 pound-feet of torque. It also seems to have been effective in helping improve fuel economy over the old engine, with city and combined fuel economy climbing 3 mpg to 23 and 26, respectively. Highway fuel economy improved by 2 mpg to 30. The same nine-speed automatic and all-wheel drive continue. 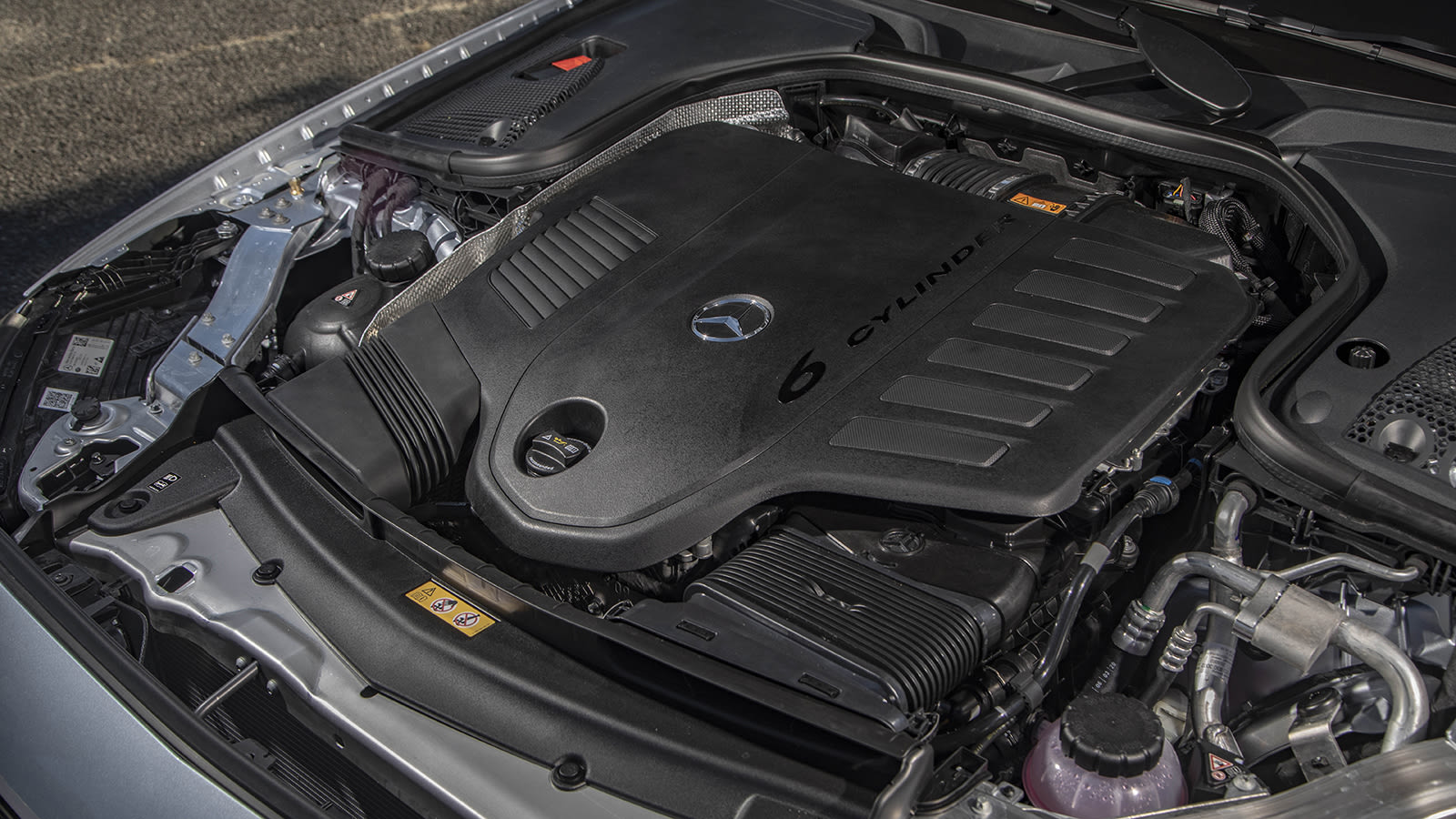 Moving beyond the numbers, the straight-six is a lovely engine to experience. It pulls impressively hard across the rev band. Throttle response is excellent, too, making it a fun engine to work with. It’s very smooth and isolated. At low rpms, it’s nearly silent, and the start-stop system is seamless. Flooring it exhibits a slightly coarse growl, but it’s not terribly unpleasant, and its other excellent characteristics make up for any mild boorishness.

The transmission is similarly civilized, executing smooth gear changes. The shift logic is fairly wise, too, favoring high gears in comfort and eco modes for quietness and fuel savings, while being more aggressive in holding gears and downshifting in sport modes. It’s a bit slow to shift compared with the lightning-quick cog swaps of, say, a BMW 5 Series. Also a bit frustrating for driving enthusiasts is a lack of a full-time manual shift mode. While you can manually select gears with the paddles, the car will go back into auto mode if you haven’t shifted after a short time. This can be particularly annoying when driving on a long downhill stretch of road.

It’s something that’s rectified on AMG versions of the E-Class, but it’s still worth bringing up because even the E 450 is a rewarding car for driving enthusiasts. Put it into the sportiest settings, and body roll is very mild, the steering weighted well, and the chassis quite responsive. The car feels light and is impressively communicative. The steering is a bit numb, but precise and accurate. As a result, you feel connected and confident hustling this big sedan through corners.

The sportiest modes do make the ride a bit stiff and bumpy, albeit composed. As such, you’ll likely want to keep it in the comfort and eco modes for long cruises and commutes. In those modes, the suspension is soft but steady for a silky smooth ride. Add to that the quiet engine and cabin, and the E-Class is a serene machine. 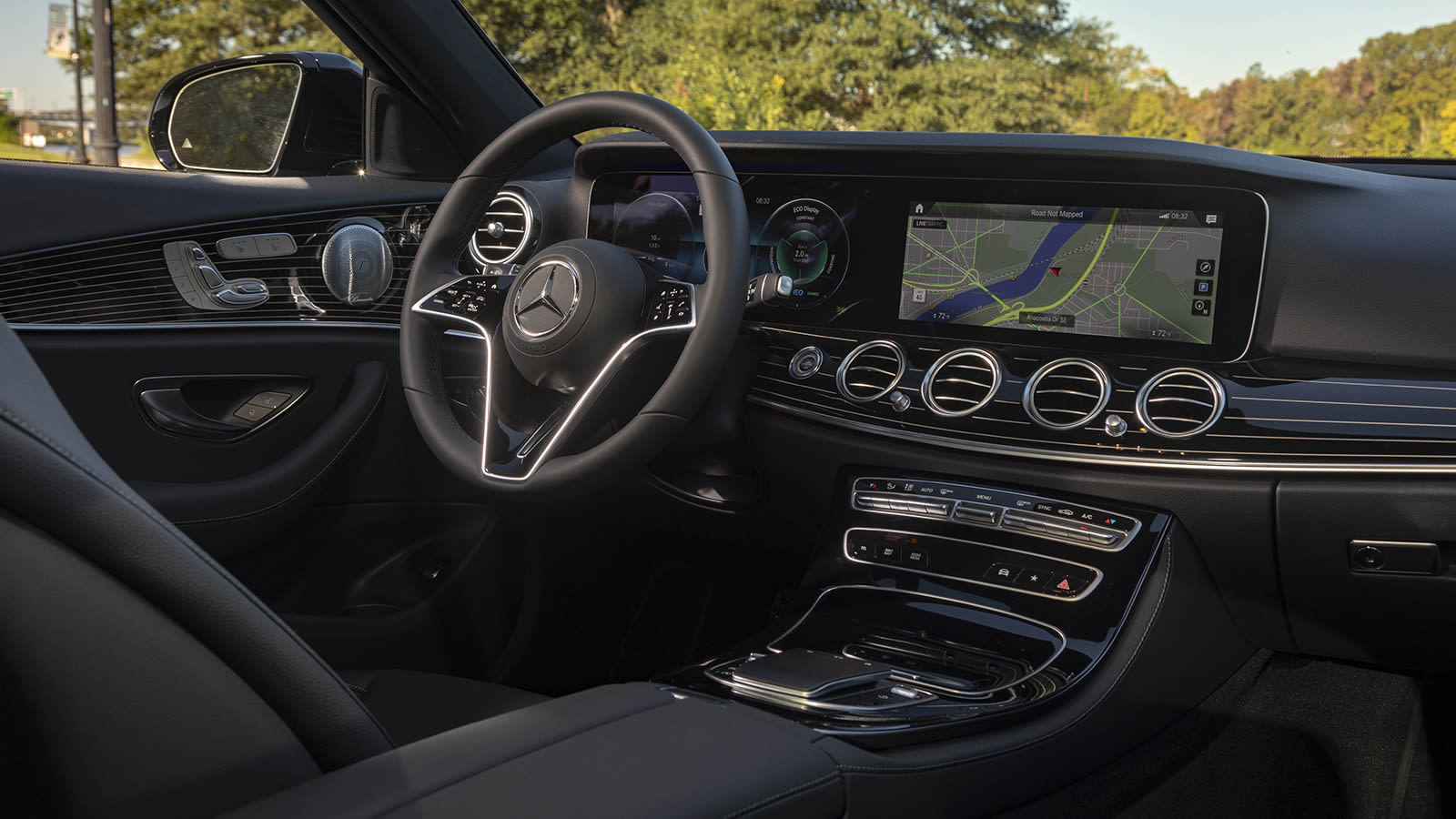 Speaking of the cabin, it remains one of the nicest in the industry. Customers have a large selection of leather and wood trim, all of which are extremely high quality and will beg to be caressed by your hands. Liberally applied ambient lighting adds some visual pizazz, and the dual screens are bright and crisp with plenty of ways to customize the appearance and layout of information. You have multiple ways of interacting with the infotainment system, too, whether it’s with the touchscreen, touch-sensitive pads on the steering wheel and center console, or with the available MBUX voice control. And our past experience with the MBUX voice control has always been positive, being easy to use and responsive. The augmented reality navigation stuff is also really handy, helping make it abundantly clear where your turn is or where a poorly marked street is.

Unfortunately, the touch pads are the first of a couple E-Class foibles. With many functions come many menus and layers of menus, and they can become tedious to navigate with loads of repeated swipes. Inputs using the pads aren’t as accurate and precise as when using control knobs or scroll wheels, either. This is particularly annoying with the cruise control and volume touch pads on the steering wheel.

The other complaint we have about the E-Class interior is that it’s a bit tight. Your 5-foot-11-inch author found that the center tunnel steals knee room and means that you may find your throttle leg rubbing against it frequently. Headroom and hip room are fine up front, at least. It’s the same story in the back where your author’s knees were rubbing against the seat back of his preferred driver seat position.

These are still fairly minor complaints, though. The E-Class overall is still one of the best-built, most luxurious sedans in its class. It handles and rides beautifully, and its strong powertrain line-up has been augmented with a new engine that’s just as good as the last one, but more efficient. And as one final bonus, the entire E-Class range is barely any more expensive than the previous model year. In the case of this E 450 with the new engine, the base price increases just $505. As such, there’s never been a better time to pick up this midsize luxury leader.