The 2021 Genesis GV80 is the newest model from the newest luxury brand, a midsize crossover with a grand grille, a plush interior and more than a whiff of Bentley in its proportions and detailing. As Genesis is to Hyundai what Lexus is to Toyota, it would seem logical that the GV80 is just a tarted up Palisade, but that actually isn’t the case. Instead, it shares its rear-wheel-drive platform with the also-new G80 sedan, which graces the GV80 with more elegant long-hood/short-overhang proportions and grants it superior driving dynamics. It also makes the GV80 a more convincing answer to comparably laid out luxury SUVs, including the BMW X5, Mercedes GLE and Lincoln Aviator, and quite frankly makes it harder to dismiss.

And after getting time behind the 2021 GV80’s unusual monospoke wheel, it would be a mistake to dismiss it. Although Genesis is a new brand, Hyundai has been churning out dependable, high-quality cars for years. People dismissed Lexus in the beginning, too. The GV80 isn’t just festooned with the requisite amount of leather and fancy features, it’s cabin is uniquely designed, slathered in rich details and comes standard with an abundance of technology that’s actually user friendly. Space inside is less than you’ll find in bigger, pricier luxury SUVs (BMW X7, Mercedes GLS), as well as big non-luxury crossovers like the Palisade, but it should be more than enough for those also considering the similarly sized X5, GLE, Aviator or perhaps the smaller Lexus RX. The driving experience isn’t quite as memorable, but the ride and handling balance are appropriately sophisticated, the steering is precise and both engine choice offer more than enough power for such a large luxury vehicle. It definitely fall more on the comfortable-yet-controlled end of the spectrum with Mercedes and Range Rover.

While Genesis has been around for a few years now, its really the GV80 that stands the best chance of getting noticed by luxury buyers who are used to looking to Germany or Japan. SUVs are obviously what most people want and in the GV80, they’ll find a good one.

The GV80 cabin is just as impressive in person as it is in pictures. It’s tastefully unique and genuinely luxurious. Keep in mind the diamond-quilted leather seats, fancy digital gauges and sumptuous multi-tone color schemes aren’t in every model, but the design and materials quality are common throughout all models.

That includes the high-quality switch gear unique to Genesis (as opposed to be pilfered from the Hyundai parts bin), most notably the various knobs with a knurled finish similar to what you get in a Bentley. True, most are knurled plastic, but it’s at least nice plastic and the rotary shifter surround is the real metal deal. Also common throughout the lineup is the immense 14.5-inch dashtop touchscreen with supporting center console controller that basically acts like an old iPod thumbwheel. This combination of new-and-old Apple-style control interfaces was bit polarizing among our editors, but if majority rules, than more of us liked it. While the touchscreen is great for many functions, the wheel makes scrolling through songs, contacts or radio stations much easier. We also like that Genesis maintains physical controls for volume, tuning and various menu shortcuts.

As for what it all controls, the feature content is immense but the layout is simple. If there was any area where the GV80 is clearly related to a Hyundai it’s here, and it’s a good thing. Though a tad fancier in appearance (a defused image of nighttime Seoul sits in the backround of menus, for instance), its functionality is just as excellent as what you get in the top-of-the-line Palisade or Sonata. Actually, it’s just a bit better due to its two extra inches of screen width.

How big is it?

The GV80 is just a hair longer than the BMW X5, Mercedes GLE and Volvo XC90, while falling 4 inches short of a Lincoln Aviator. It’s shorter in height than all of them, however, which combines with some clever design elements to make the GV80 look especially long and sleek.

Despite the lower roof, the cabin doesn’t suffer for headroom. There’s plenty of it in rows one and two. Second-row legroom isn’t as great as you might expect in a three-row crossover, but that’s typical of RWD-based models, including the X5 and GLE. The seats are quite cushy and deeply contoured, though, and recline to a luxurious degree. They can be heated and ventilated, too.

The third-row seats are exclusively paired with the V6 engine and either the Advance+ or Prestige packages. This means the three-row GV80 starts at more than $65,050. This certainly limits its appeal, but it’s also not the most usable third-row. Legroom is actually perfectly usable (you don’t even have to slide the second-row forward for an adult to fit), but headroom is tight and it’s difficult to reach. The third-rows of the XC90 and Aviator are much better – they’re also standard.

We don’t have cargo capacity figures, but we do know there is a scarcity of space behind the raised third row. It can hold the same number of suitcases as the Cadillac XT6, so fewer than all other three-row SUVs we’ve tested. We would expect that five-passenger, two-row GV80s would have extra cargo volume behind its second row, or at least substantial under-floor storage. 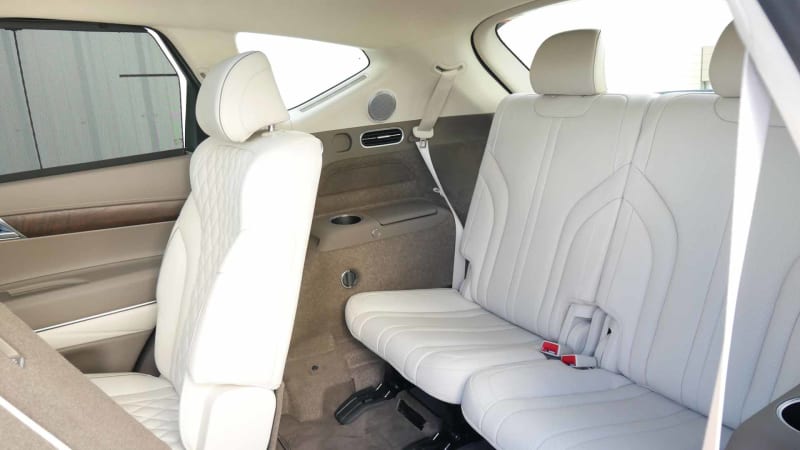 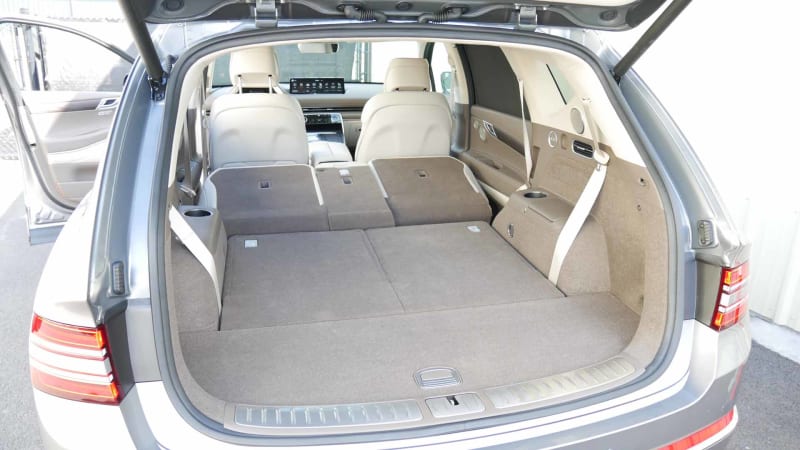 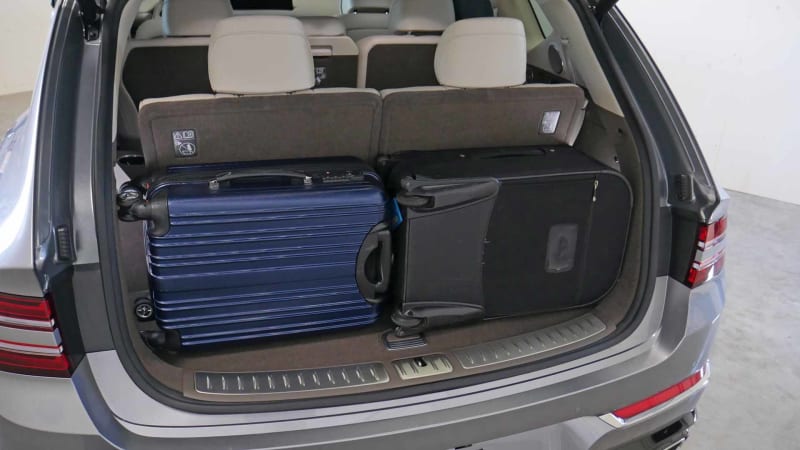 What’s the performance and fuel economy?

There are two engines offered, indicated by the names 2.5T and 3.5T.

As the name suggests, the base engine is a 2.5-liter turbocharged inline-four, which produces 300 horsepower and 311 pound-feet of torque. That’s a significant amount for a four-cylinder engine. Rear-wheel drive is standard and the optional all-wheel-system brings with it a limited-slip differential. Both engines are paired with an eight-speed automatic. It returns an EPA-estimated 21 mpg city, 25 mpg highway and 23 mpg combined with RWD and 21/25/22 with AWD.

If you’re looking to get the GV80 at its finest, go with the 3.5T. Besides its abundance of power, every versions comes with adaptive dampers that can adjust their firmness based on information from a forward-looking camera. If that sounds impressive, it is, as only the nicest cars like the Mercedes S-Class and BMW 7 Series have come equipped with such a feature. And it works. On cobblestone streets and broken pavement, the GV80 3.5T displayed good bump isolation that was indeed slightly better than the standard-suspension version. Both variants seem firmly sprung, with tight control of body motions, although the 3.5T is still able to deliver a plush ride — the standard-sprung version, slightly less so. The vehicles’ structure feels solid, devoid of creaks and squeaks even in the early production examples we’ve tested.

The GV80’s precise steering engendered confidence. It’s pleasantly weighted, neither over-boosted nor unnecessarily heavy, though it lacks a strong sense of on-center. Overall, this is a highly agreeable chassis setup, and one without a dizzying array of configurability. Not that it’s really needed since the various drive modes don’t have a huge impact on the proceedings beyond the Sport mode’s aggressive throttle tip-in and its preference for lower gear ratios.

The base 2.5-liter makes impressive power for a turbo-four and it’s certainly up to the job of moving the big, heavy GV80. It still demands a bit more patience when accelerating up to freeway speeds or executing a two-lane pass. It’s also a bit gravelly under full-throttle acceleration. The turbo V6, therefore, is the better choice if you’re less concerned with the price of entry or price of gas. It’s a punchy engine with well-metered throttle response, but we wouldn’t call the acceleration as strong as the engine’s output might suggest. In other words, it has the guts people expect from this segment, but don’t expect an AMG rival.

What more can I read about the Genesis GV80?

Our first drive of the GV80, including both the 2.5T and 3.5T models. This provides a deeper dive into its design and driving experience. 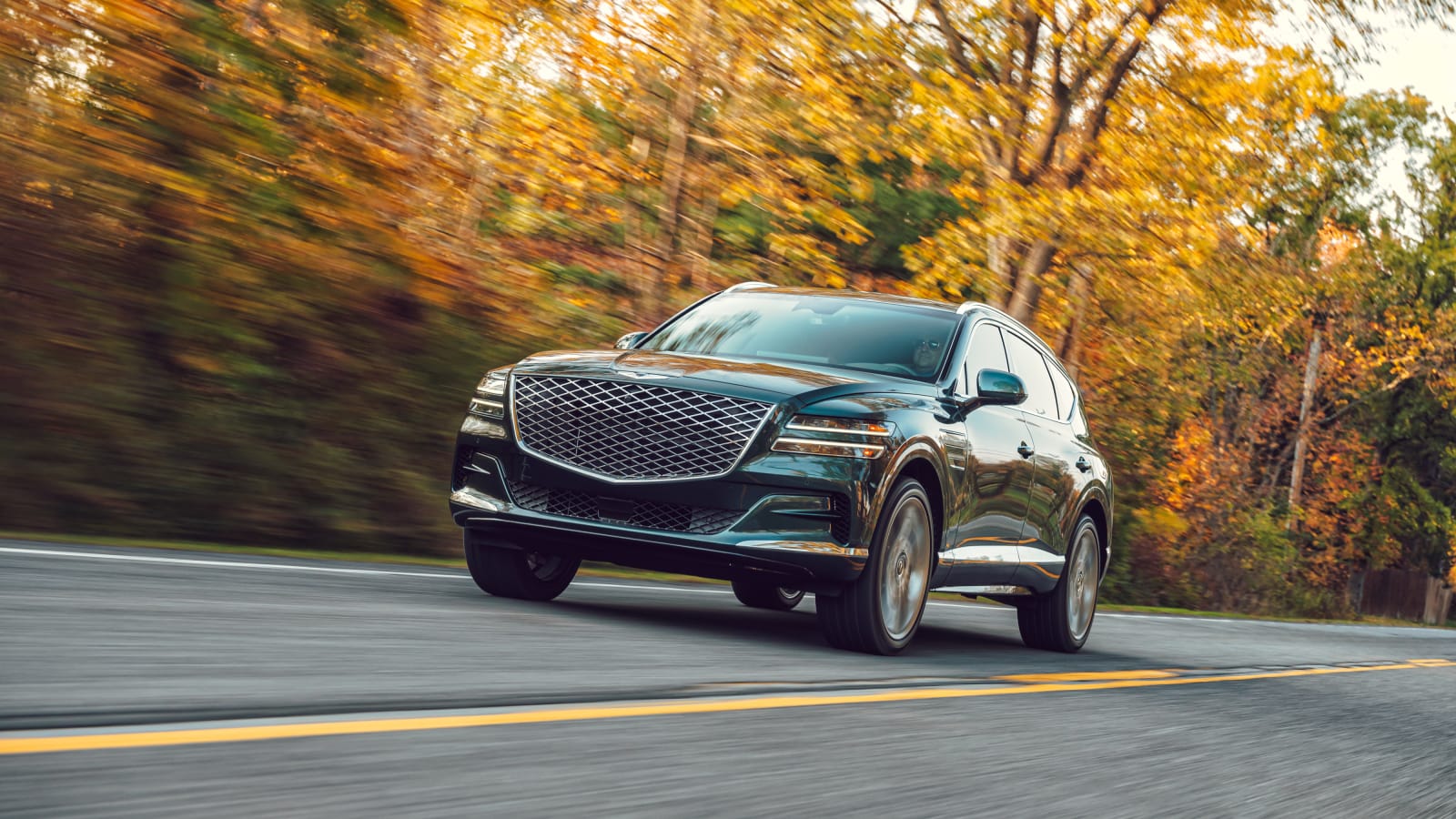 Beyond that, things get confusing. There are Advance and Prestige packages, but their content differs depending on engine and drivetrain. Sometimes a feature is added in the Advance package, sometimes it’s in the Prestige. Again, confusing.

The 3.5T Prestige is unique, however. Its exclusive upgrades include an electronic limited-slip differential, Nappa leather seating, ventilated second-row seats, power rear side sunshades, power soft-closing doors, and an enhanced digital gauge cluster. We’re also pretty sure this is how you get the very Bentley green-brown interior, below. 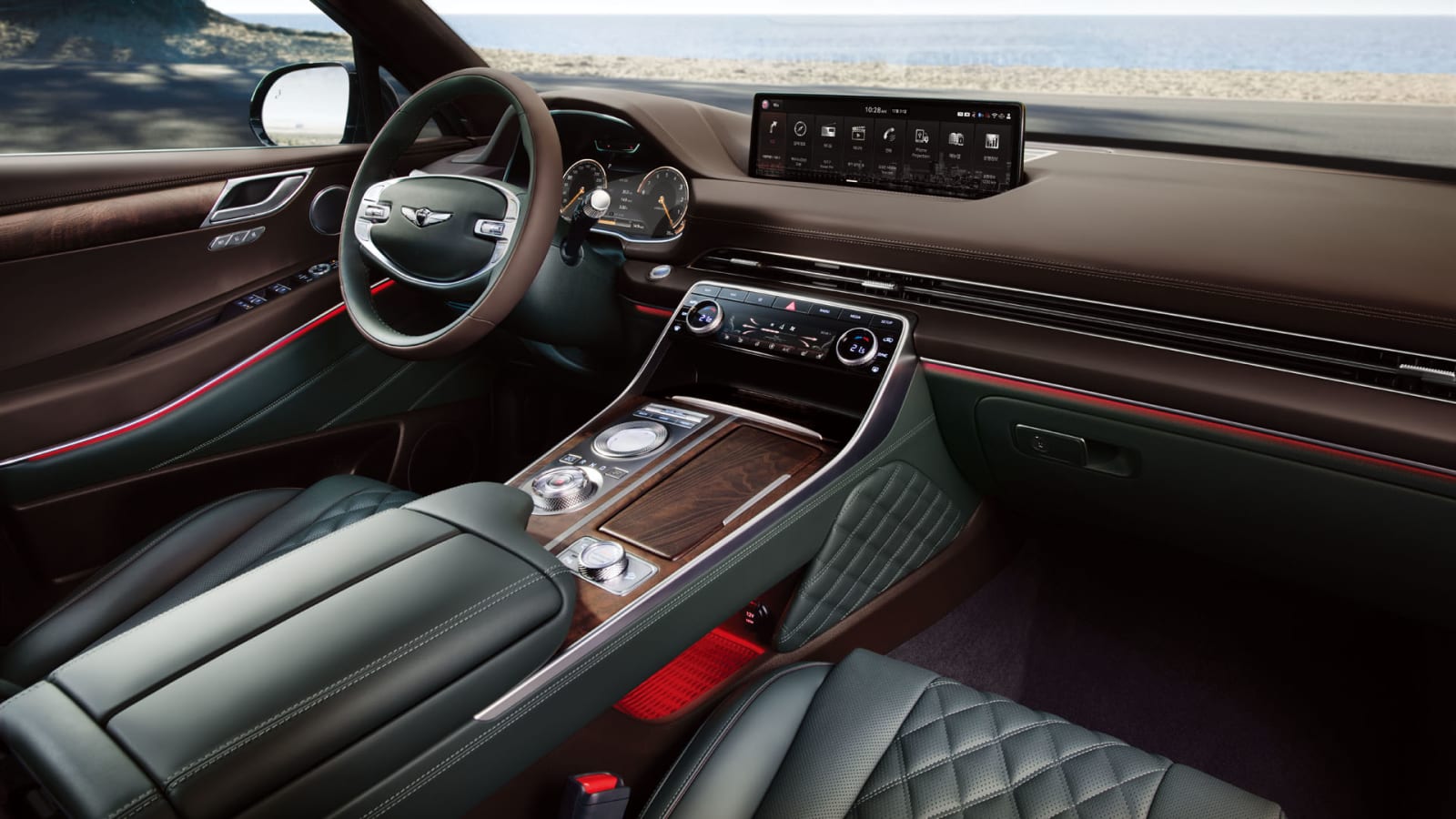 Every GV80 comes with the latest and greatest in Hyundai Group’s substantial safety system arsenal. The standard forward collision warning system with automatic emergency braking not only detects pedestrians, but traffic coming from the left and right at intersections. Lane-keeping assist, blind-spot warning and a driver inattention warning system are all standard, as is an advanced adaptive cruise control system with automated lane changes, highway steering assist and a unique AI-based system that apparently learns the driver’s driving characteristics and adapts its automated driving to be similar. We’re very curious to test that.

Optional systems include Hyundai’s Smart Park assist, a surround-view parking camera and an enhanced blind-spot warning system with cameras that send images from each side of the car into the digital instrument cluster. The latter is an enhanced version of Autoblog’s 2020 Tech of the Year.

The GV80 has not been crash tested by a third party.