The SMMT has said that England’s COVID-19 ‘Lockdown 2’ and the Welsh ‘firebreak’ are set result in the UK’s weakest new car sales performance since 1982, following a 1.6% decline during October.

In its monthly car registrations report, published this morning (November 5), the Society of Motor Manufacturers and Traders said that new car registrations had dipped to 140,945 last month – marking a nine-year low for the sector.

It said that the result was “flattered by a weak October 2019”, when ongoing supply issues arising from regulatory challenges, as well as political and economic uncertainty ahead of the anticipated Hallowe’en Brexit withdrawal date, saw overall registrations by private buyers recede by 13.1% in the month.

And the SMMT claimed that losses resulting from the Welsh ‘firebreak’ had accounted for more than half of month’s decline, ahead of the new ‘stay at home’ order for England, which will force UK showrooms to close in November.

Click and collect was hailed as a potential ray of hope for traders, but the SMMT warned that the sector was now facing a “double hit of reduced winter trading and the challenge of Brexit”.

But the SMMT has now reduced its 2020 new car registrations forecast by a further 100,000 units as a result of the COVID-19 mitigation measures in Wales and England.

As of mid-October, the industry had been expecting to register about 1.66 million new cars in 2020, but that forecast has now been downgraded to 1.56 million, meaning a total year-on-year decline of around 750,000 registrations and a £22.5 billion loss in turnover.

This year is now likely to be the weakest year since 1982, the SMMT has said.

SMMT chief executive, Mike Hawes, said: “When showrooms shut, demand drops, so there is a real danger that with England today entering a second lockdown, both dealers and manufacturers could face temporary closure.

“What is not in doubt, however, is that the entire industry now faces an even tougher end to the year as businesses desperately try to manage resources, stock, production and cashflow in the penultimate month before the inevitable upheaval of Brexit.

“Keeping showrooms open – some of the most COVID-secure retail environments around – would help cushion the blow but, more than ever, we need a tariff-free deal with the EU to provide some much-needed respite for an industry that is resilient but massively challenged.”

October’s registrations decline made it the weakest October since 2011 and 10.1% lower than the average recorded over the last decade.

The introduction of a ‘firebreak’ lockdown in Wales on October 23 contributed to the nation recording 25.5% fewer registrations by the end of the month, the SMMT reported, which accounted for more than half of the overall UK decline. 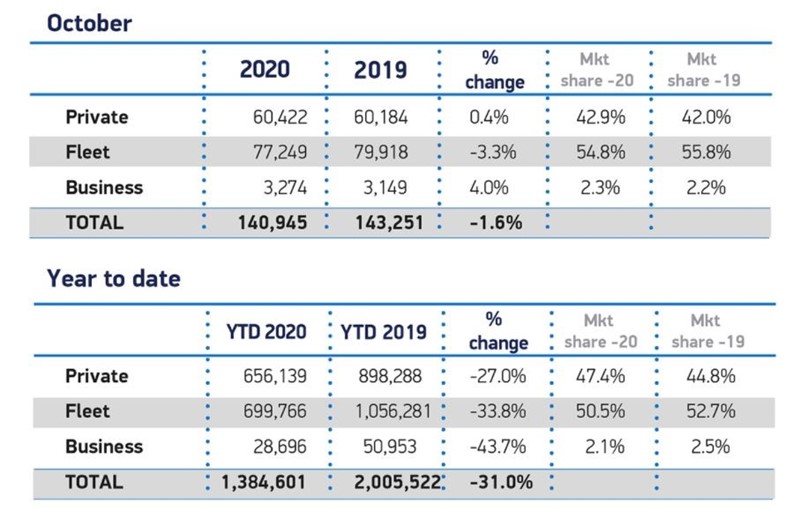 Around 2,500 fewer vehicles joining larger fleets than in October last year drove the bulk of the UK’s decline, while private registrations rose slightly, by 0.4%.

Robinson added: “It is encouraging to see the continued, strong growth in the battery electric and plug-in hybrid vehicle segments.

“Over the past months, dealers have experienced large volumes of online enquiries and we expect this to continue through November.

“Dealers will continue to comply with the regulations to arrange the delivery of cars and, where possible, meet customers’ aftersales servicing needs, in particular, to support key workers and all those who need a car to go to work or for other essential needs.

“Vehicle showrooms were the first industry sector to reopen on June 1, operating to COVID-secure guidelines.

Ian Plummer, director at Auto Trader, said that the car marketing website’s data had seen sustained consumer appetite during October, with audience numbers remaining high at over 62 million, up 25% on last year.

He added: “New car registrations are a reflection of a strong natural retail demand, which has meant retailers haven’t been doing the same month-end forced activity, including tactics like self-registering cars.

“All anecdotal feedback from retailers and manufacturers suggests that just a week ago they were tracking as much as 20% higher than last year, so although October’s overall registrations were flat, they were driven by organic consumer demand.”

Karen Johnson, head of retail and wholesale at Barclays Corporate Banking, said: “Last month’s SMMT vehicle sales data shows a slight drop in registrations versus the same period last year, but this headline statistic only goes some way to capturing the two faces of the UK’s vehicle market.

“Fleet sales, responding to challenging business conditions, were down by a substantial 3.3% year on year – but private sales, driven by changing patterns of daily life in the current environment, were actually up 0.4%.

“Looking ahead, there’s no great time for a new national lockdown, but UK car dealers will at least be relieved that it isn’t coinciding with one of their busiest trading periods.

“They’ll now be hoping that consumer appetite for spending on big ticket purchases will have grown by the time the UK comes out of a widespread lockdown, and sales can pick up lost trade as we head into the festive period.”