The Cadillac CT5, which was brand new for the 2020 model year, took the place of the CTS in General Motors’ luxury sedan portfolio. Its mission is the same as the car it replaced: compete on equal footing with the German trio of Audi, BMW, Mercedes-Benz along with Japanese brands Acura, Infiniti and Lexus. But it does so with a radically different package than the CTS. In place of the sharp corners and angular greenhouse of its predecessor is a smoother sedan with a flowing fastback shape. The new CT5 is also around $10,000 cheaper than the CTS it replaces, despite the fact that the two are within a few inches in exterior dimensions. So while it may be sized similarly to the cars it used to compete with, including the BMW 5 Series and Mercedes E-Class, it’s now priced like a 3 Series or C-Class.

Clearly, Cadillac thinks this refined strategy will position the CT5 to better compete against those established luxury players. The car itself drives quite well and is stylish, well equipped, and that price-to-size ratio gives it a unique proposition to attract buyers away from the Europeans.

The CT5 finally gets Cadillac’s Super Cruise semi-autonomous technology for 2021. It’s the latest version that includes Lane Change on Demand functionality, but it’s only available on Premium Luxury and V-Series trim levels. Caddy’s sport sedan also gets a 12-inch digital gauge cluster with multiple themes, including a Track theme on the high-performance CT5-V.

The Cadillac CT5 interior can best be described as “nice enough.” Unfortunately, “nice enough” isn’t quite good enough to compare favorably with Audi, BMW, Mercedes-Benz or Volvo. We’d say it’s not good enough to compare with cross-town rival Lincoln, either, but they won’t be selling sedans in 2021. The overall design of the CT5’s interior is reasonably good, if evocative of previous-generation BMWs, but it’s let down by some noticeable cheap-feeling bits and pieces that feel like they came from one of GM’s non-premium divisions … because they literally came from one of GM’s non-premium divisions. By contrast, you won’t find Camry switchgear in a Lexus.

Cadillac has a brand-new infotainment system that will be launching in the new Escalade SUV, but the CT5 sticks with the brand’s oft-maligned touchscreen interface (previously known as CUE). As much as customers and journalists have complained about it over the years, the latest (and likely last) version found in the CT5 works pretty well. All the necessary functions are easy to find, and the touchscreen is quick and responsive. And if you really don’t like the interface, there are physical buttons for the climate control and a pair of dials for audio. We also like the redundancy of the large console-mounted control knob and the smaller knob under the screen, which are better at scrolling through lists, including on Apple CarPlay. 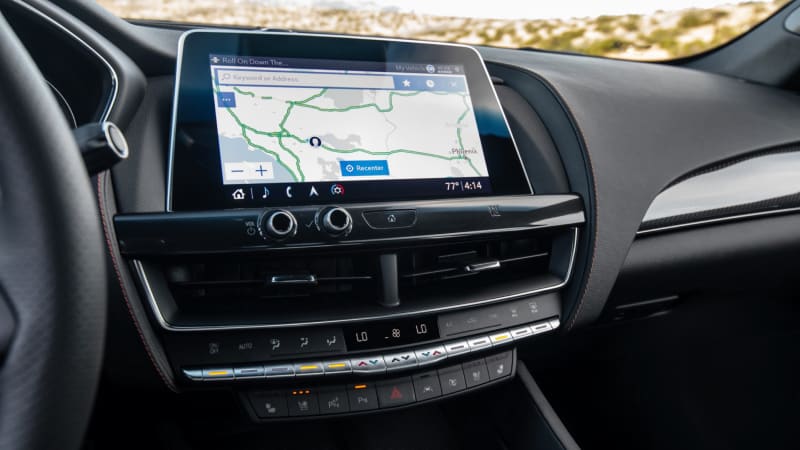 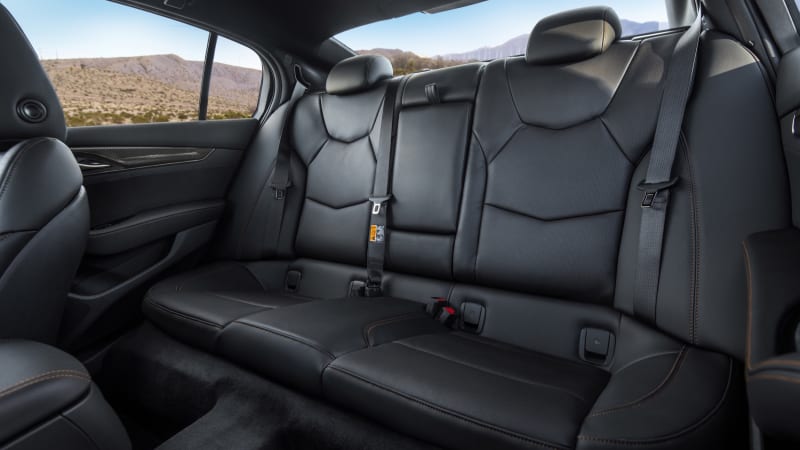 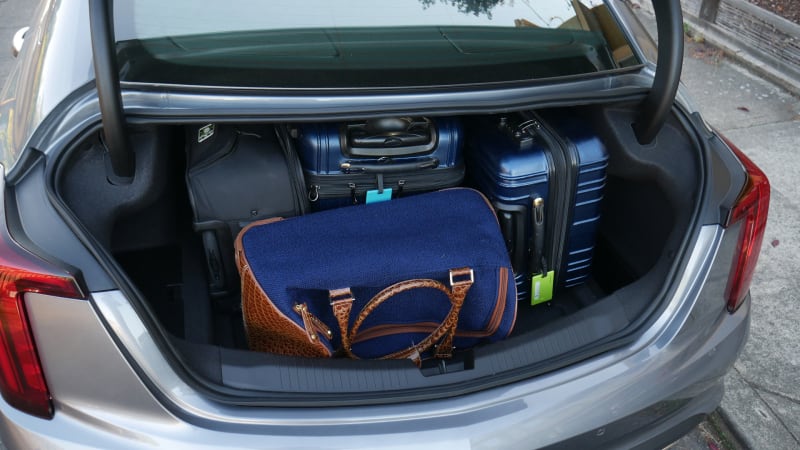 At 193.8 inches long on a 116-inch wheelbase, the CT5 is a tad shorter overall than the CTS, but with a wheelbase that’s about an inch and a half longer. It’s bigger in every significant exterior dimension than the segment-defining BMW 3 Series. With the exception of 2.7 additional inches of rear legroom, which is a solid notch in the CT5’s favor, it’s about the same size inside. Four normal-sized adults ought to fit fine inside.

You used to be able to store a Buick in a big Cadillac sedan trunk. No longer. The tiny 11.9-cubic-foot trunk is easily the most glaring surprise of the CT5 spec sheet. The Audi A6 and Mercedes-Benz E-Class are in the 13-cube range, while the 5 Series apparently has 14.5 cubic feet. It’s even smaller than the trunks of subcompact sedans like the Kia Rio and Chevy Sonic. As we discovered in this luggage test, CT5 owners will find it much more difficult to fit all their luggage into the Caddy than its competitors.

The Cadillac CT5’s standard engine is a 2.0-liter turbocharged four-cylinder that spins out 237 horsepower and 258 pound-feet of torque. A 10-speed automatic transmission and rear-wheel drive are standard on every CT5, but all-wheel drive is optional. Cadillac claims a 6.6-second 0-60 with this base engine. It delivers 23 mpg in the city, 32 on the highway and 26 combined with RWD. All-wheel drive knocks that down to 21/21/25.

The CT5 Premium Luxury offers an optional 3.0-liter twin-turbo engine that makes 335 horsepower and 405 pound-feet of torque. It returns 19/26/21 with RWD, while all-wheel drive knocks 1 mpg from the city and highway scores.

The base CT5 with its standard turbocharged four-cylinder engine ought to prove adequate for buyers who care more about maximizing fuel efficiency than launching away from stoplights. The turbocharged V6 is much more enthusiastic. Though it feels a little flat right off idle, it comes on strong after a split second of hesitation. The 10-speed automatic transmission is quite good and most drivers will find little reason to use the steering wheel-mounted paddles.

The best thing about the CT5, though, is its excellent chassis. Like the CTS that preceded it (and the smaller old ATS and current CT4, not to mention the current Chevy Camaro), the CT5 rides atop an evolution of GM’s Alpha architecture. Sturdy bones are crucial for a sporting sedan, and the CT5’s stiff structure doesn’t disappoint. Standard multi-valve dampers in all non-V CT5 trims provide a comfortable ride while keeping body roll in check during hard cornering. Cadillac’s much more advanced Magnetic Ride 4.0 suspension is excellent and comes standard on the CT5-V.

Driver Mode Control offers Tour, Sport, and Track options (in addition to Snow/Ice and a customizable My Mode). The CT5-V gets an additional V-Mode to further customize the car. The brakes, which adjust along with the steering and transmission across the various driving modes, feel firm and reassuring, with strong stopping power.

Some of our testers have a very hard time finding a good driving position in the CT5, pointing a finger (or in this case, toe) at the placement of the throttle and brake pedals as the primary point of pain. Other testers reported no such problems. We suggest interested buyers take the CT5 for a spin to gauge their personal level of comfort with its ergonomics.

What more can I read about the Cadillac CT5?

Our first drive impressions of the range-topping (for now) CT5-V, including more information about its specific performance and features. 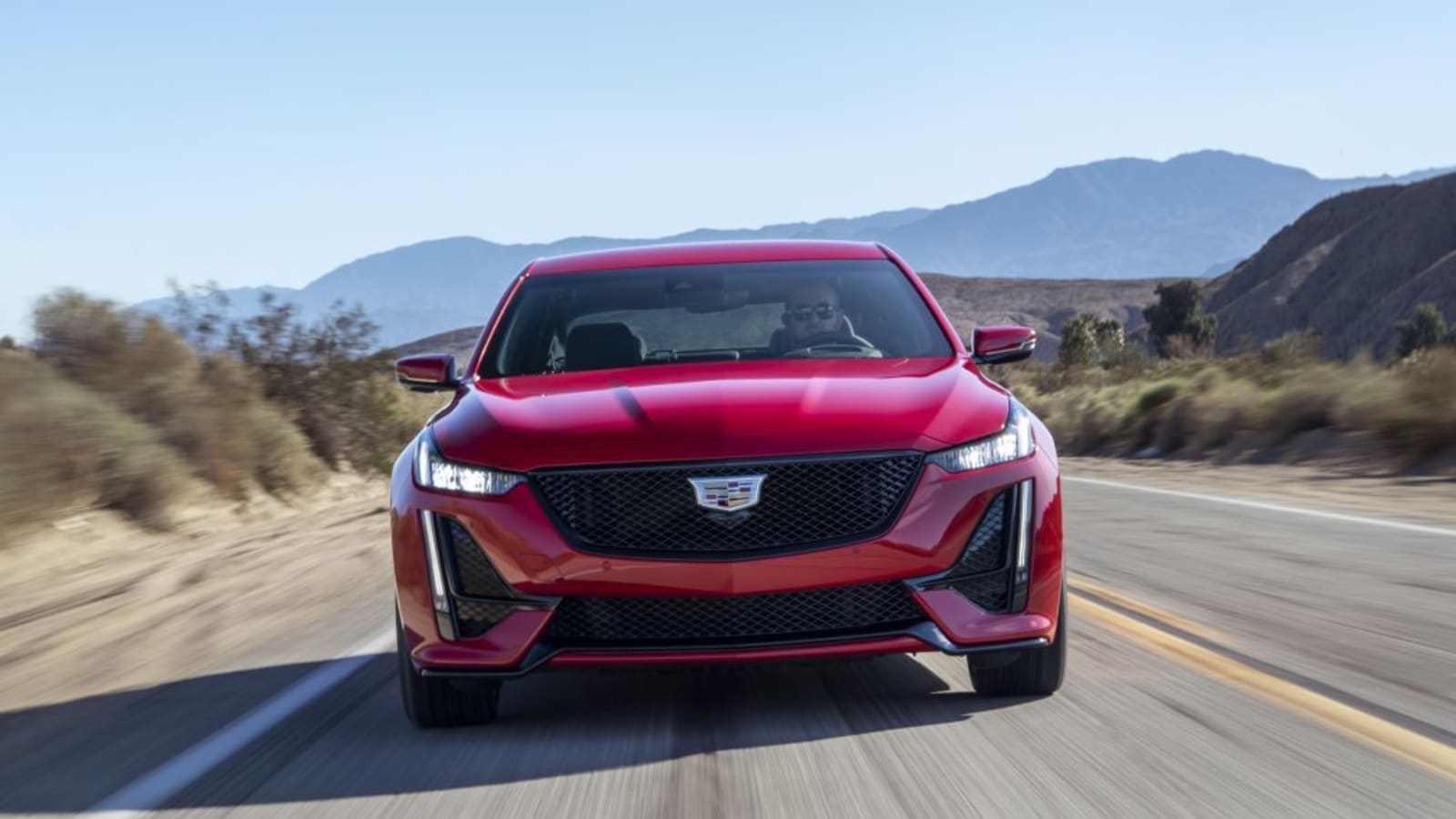 Our standard cargo capacity test was not exactly kind to the CT5. It may be a big car on the outside, but that size definitely didn’t go to the trunk. 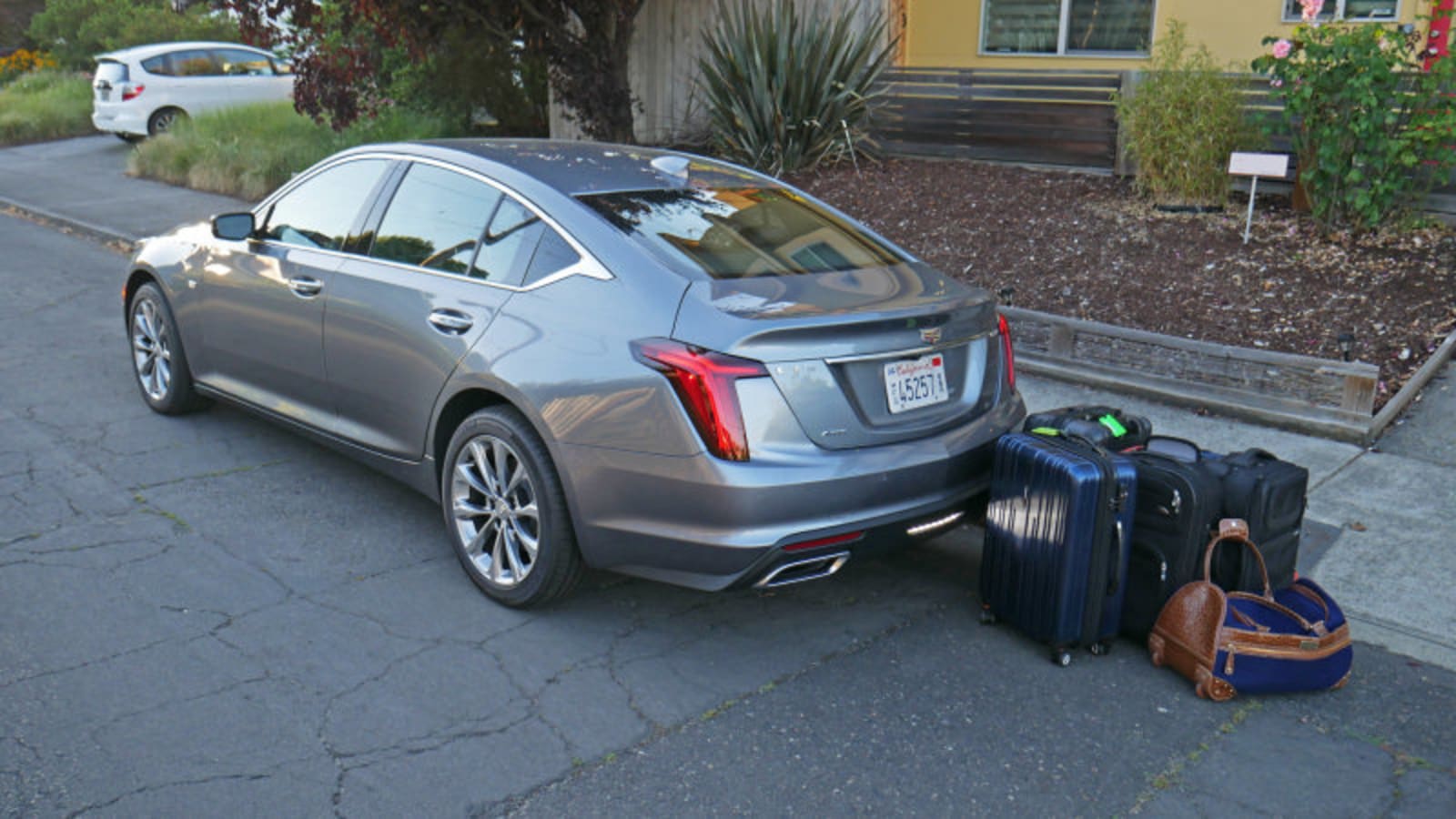 The base rear-wheel-drive 2021 CT5 with its standard 2.0-liter turbocharged four-cylinder engine starts at $37,990 with its mandatory $995 destination charge factored in. Adding all-wheel drive incurs an additional $2,600. You can dig a little deeper with this breakdown of features, pricing and specs of each model here on Autoblog.

Here’s a quick rundown of all the available trim levels:

What are the CT5’s safety equipment and crash ratings?

Forward collision warning with automatic emergency braking and pedestrian detection come standard, but blind-spot warning and lane-keeping assist only come with higher grade models. A Driver Assist package bundles all of the available safety equipment Cadillac offers, but it’s not available on the base Luxury trim level.

The Cadillac CT5 gets a five-star safety rating from the National Highway Traffic and Safety Administration. The Insurance Institute for Highway Safety has not yet tested the CT5.