Living in Denver, I have the opportunity to view just about every model of Subaru sold since the late 1970s in my local car boneyards, from the “Making Love In a Subaru” era of super-cheap tiny cars all the way through to the odd-looking B9 Tribecas. Since the third-generation Outback wagons are now at least 16 years old, they’ve begun showing up in vast quantities here (which works well for me, since I’d like to upgrade my ’04 Outback with options it didn’t have when new). Most of these cars aren’t sufficiently interesting to achieve Junkyard Gem status, though I have documented a McIntosh-audio-equipped Outback VDC and a fully-loaded Outback H6 in recent years, but today’s car had such a dramatic — if horribly impractical — interior that I felt compelled to photograph it.

Duct tape, while available in many splendid colors, doesn’t fare too well in the hot confines of a car interior, especially when you’re a mile above sea level and the sun sends its thermonuclear punishment pouring down just about every day. 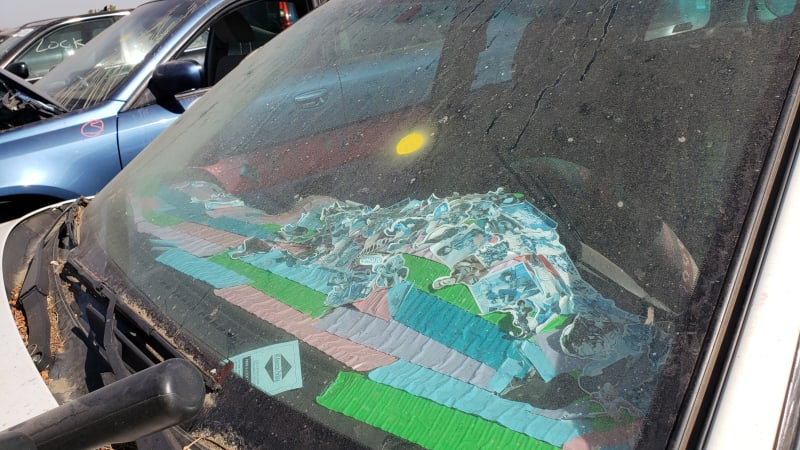 The tape dries out and peels up, shedding itchy flakes everywhere. 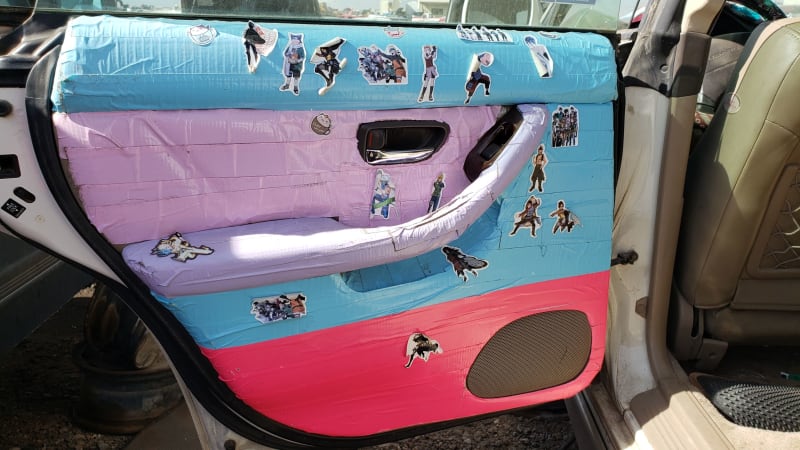 Still, the concept was sound: replace those boring beige surfaces with brightly colored ones! 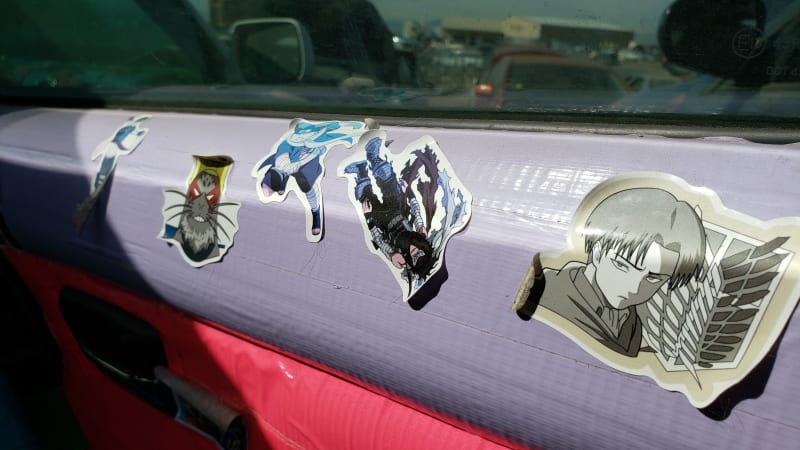 A generous helping of anime stickers adds some style, too. 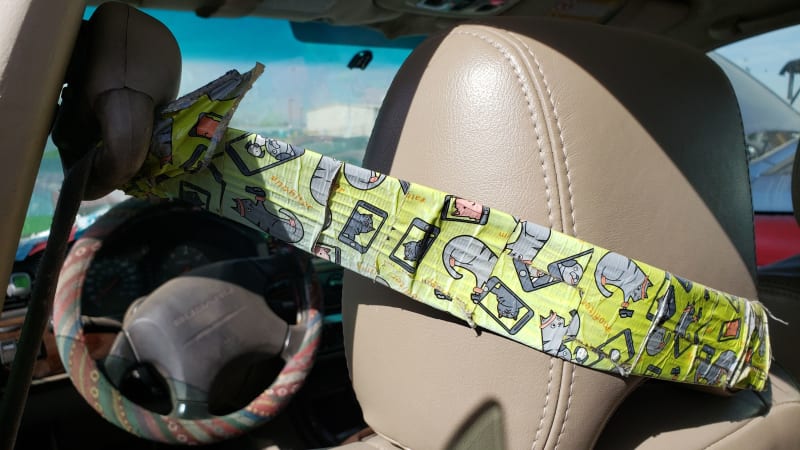 Taping the seat belts seems like a bad move, though, since decaying duct tape dropping scratchy detritus down your shirt on a hot day is suboptimal. 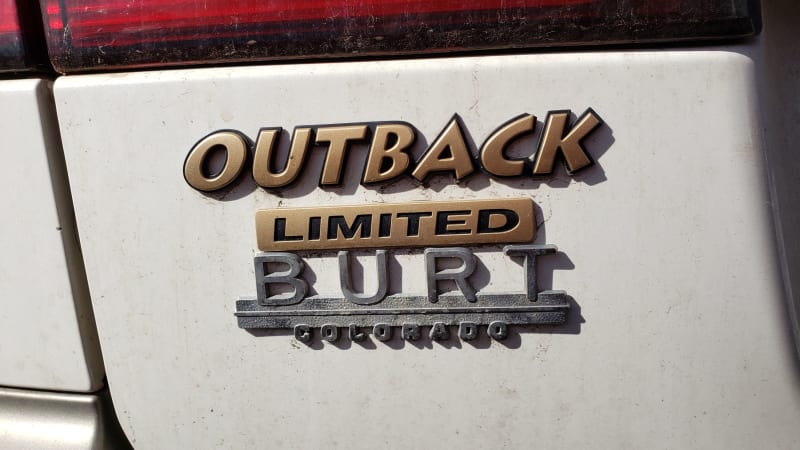 In 2001, Subaru shoppers could still buy the Outback version of the Legacy sedan. The Outback didn’t become a separate model until the 2005 model year, so this car is still considered a Legacy Outback Wagon despite the lack of Legacy badging on its exterior. The Limited version got leather seats, a nicer audio system, and an automatic transmission. 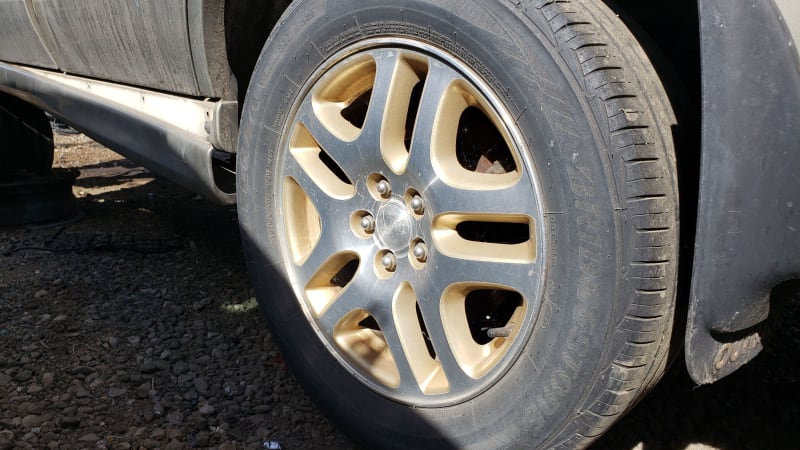 I wish I’d been able to grab some of these cool-looking gold-and-aluminum factory wheels when I needed an extra set for winter tires. 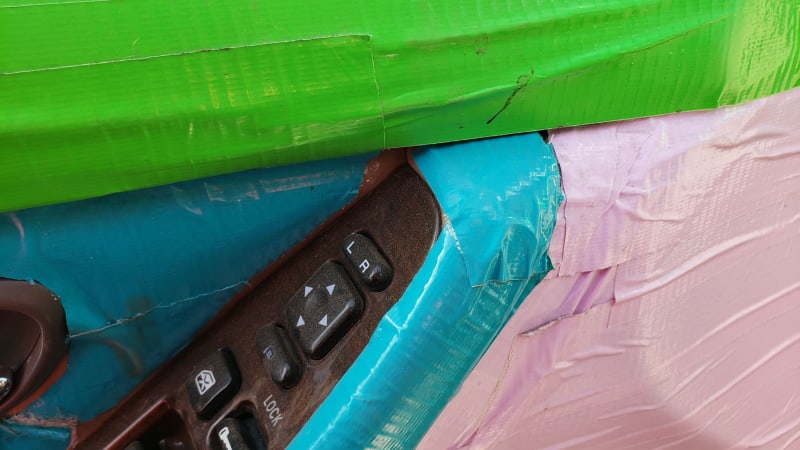 Once you duct tape your interior, it’s very difficult to un-duct-tape it, what with glue residue everywhere. We can assume that retail value on this car took a hit as a result.

“Sport utility” had become a magical phrase in the car-selling world by 2001, so Subaru pitched this car as a deadly rival for the Jeep Grand Cherokee and Ford Explorer.