​Vauxhall has ushered in its new logo and an updated design on the new Crossland SUV – with order books opening today.

Prices for the updated product, which sits between the new Mokka and Grandland SUVs in the PSA Group-owned brand’s line-up, start at £19,060 for the petrol-engined version in SE trim.

Customer deliveries are expected to start in early 2021.

Vauxhall’s new Vizor front-end was first introduced on the all-new Mokka and sees a single module run across the face of the new compact SUV, containing LED lights and the new Griffin logo.

At the back, new dark-tinted tail lights and a new high-gloss black tailgate surface give the new Crossland a wider stance than the first generation car. 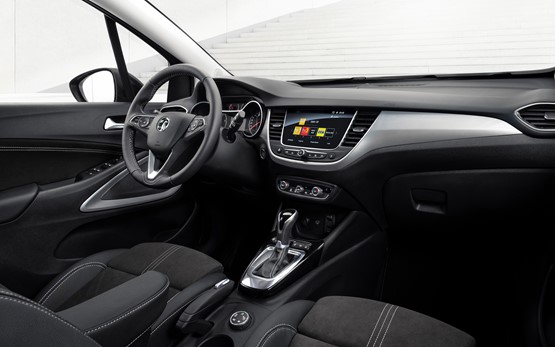 A range of engine options starts with an 83PS normally-aspirated 1.2-litre petrol engine.

Two further 1.2-litre turbocharged petrol engines offering a choice of 110PS or 130PS, the more powerful of which is available with a six-speed automatic transmission.

Those wanting to opt for diesel power have a choice of a 110PS 1.5-litre turbocharged unit featuring a six-speed manual gearbox or a 120PS unit mated to a six-speed automatic transmission.