ANN ARBOR, Mich. — There was a very good chance the 2020 Chevrolet Corvette Convertible would be wasted on me. I’m the type of person who wishes there was a fixed-roof Miata. My wife accuses me of vampirism (not for my bloodlust, but rather my phobic attitude toward sunshine). The onset of fall’s cool and unpredictable weather was another potential foil against the probability of the top getting dropped. Also, this thing was bright. If a Corvette painted the same fluorescent Accelerate Yellow paint managed to captivate crowds on the Las Vegas Strip, how much attention was a Convertible version going to garner in the Motor City? Having the top down would only make me feel more exposed.

But firing up the engine for the first time tilted the odds in favor of more minutes of open-top driving. As we’ve noted in previous reviews of the coupe, the C8 Corvette sounds sweet on the outside, but not enough of the soundtrack makes its way into the cabin. That’s still the case with the Convertible’s top up, but weather permitting, dropping it increases the chance of bathing in the sonic glory of the Z51 performance exhaust.

A scheduling reality also helped to ensure I’d spend more time with the roof open: I was in charge of taking my son to and from school. I had never driven anywhere with the boy in the front seat, but that was about to change. For those of you expecting a car seat fitment verdict in a Corvette road test, you’re in luck: it was actually quite easy to plop his front-facing car seat into the cabin with the top open — no angling the seat through the door, no stooping and hitting my head on the door frame.

And forget my sun aversion. When your car-crazed child (who — heads up, team — aspires to be an “Autoblog worker” when he grows up) gets to ride in the front seat for the first time in his life, and it’s in a Corvette Convertible, you drop that damn top. 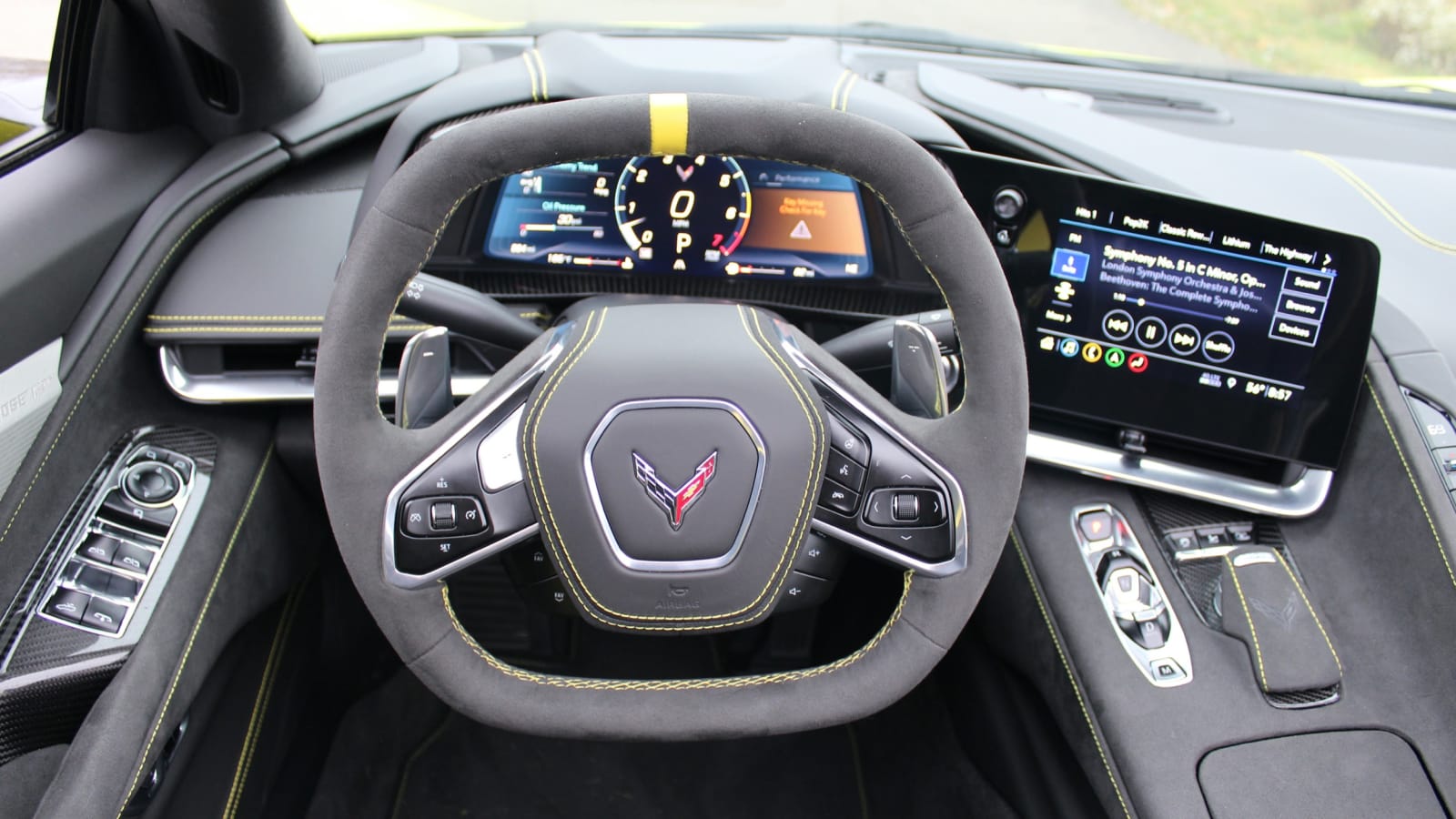 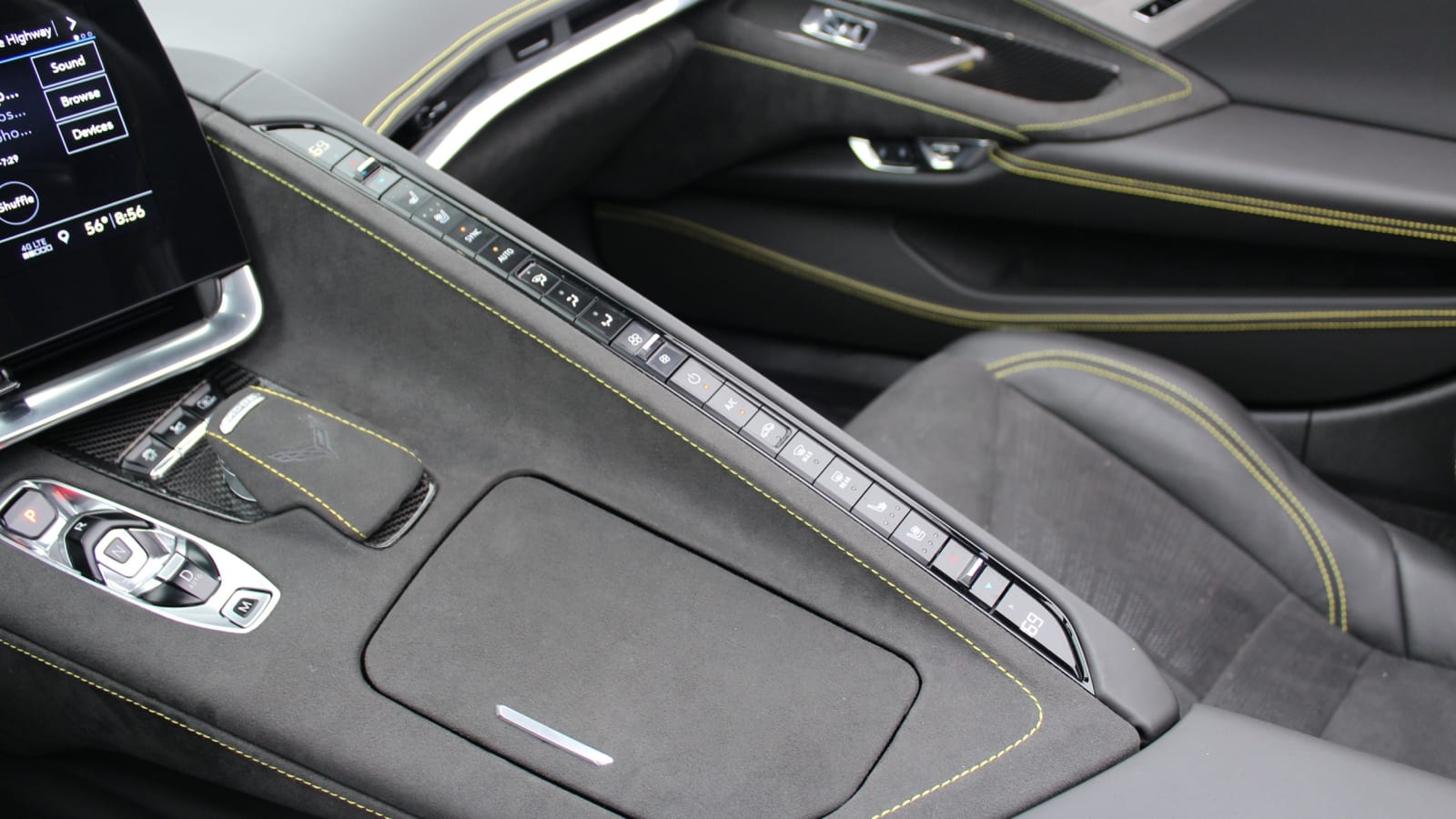 But, you might be thinking, what gives? Doesn’t the coupe already have a removable top? What does the $7,500 price premium of the convertible actually get you?

For one, it’s much easier to remove the Convertible’s roof. There are no mechanical latches to manually open. You don’t have to get out of the car, do some light-but-awkward lifting, and then fill up the trunk with roof panels. You don’t even need to stop the car. In the Convertible, you simply hold a button (either in the car or on the key fob) and the top folds down behind the cabin at speeds of up to 30 mph. The one significant downside: there’s no pheasant-under-glass presentation of the 6.2-liter V8.

Falling leaves swirled around us as we carved our way through the fall colors on the way to school, both of us elated by the experience. While I had been fully briefed by our prior first drive and road test of the C8, nothing quite prepares you for your first jaunt in GM’s new masterpiece. It’s fast, visceral and surprisingly refined. There’s no shortage of power, and the acceleration from our tester’s 495 horsepower and 470 pound-feet of torque is enough to overcome the massive rear tires’ grip, summoning the stability control to save the day. The Z51 suspension with optional magnetic ride control keeps this low-slung dart from punishing you while maintaining contact on imperfect roads. 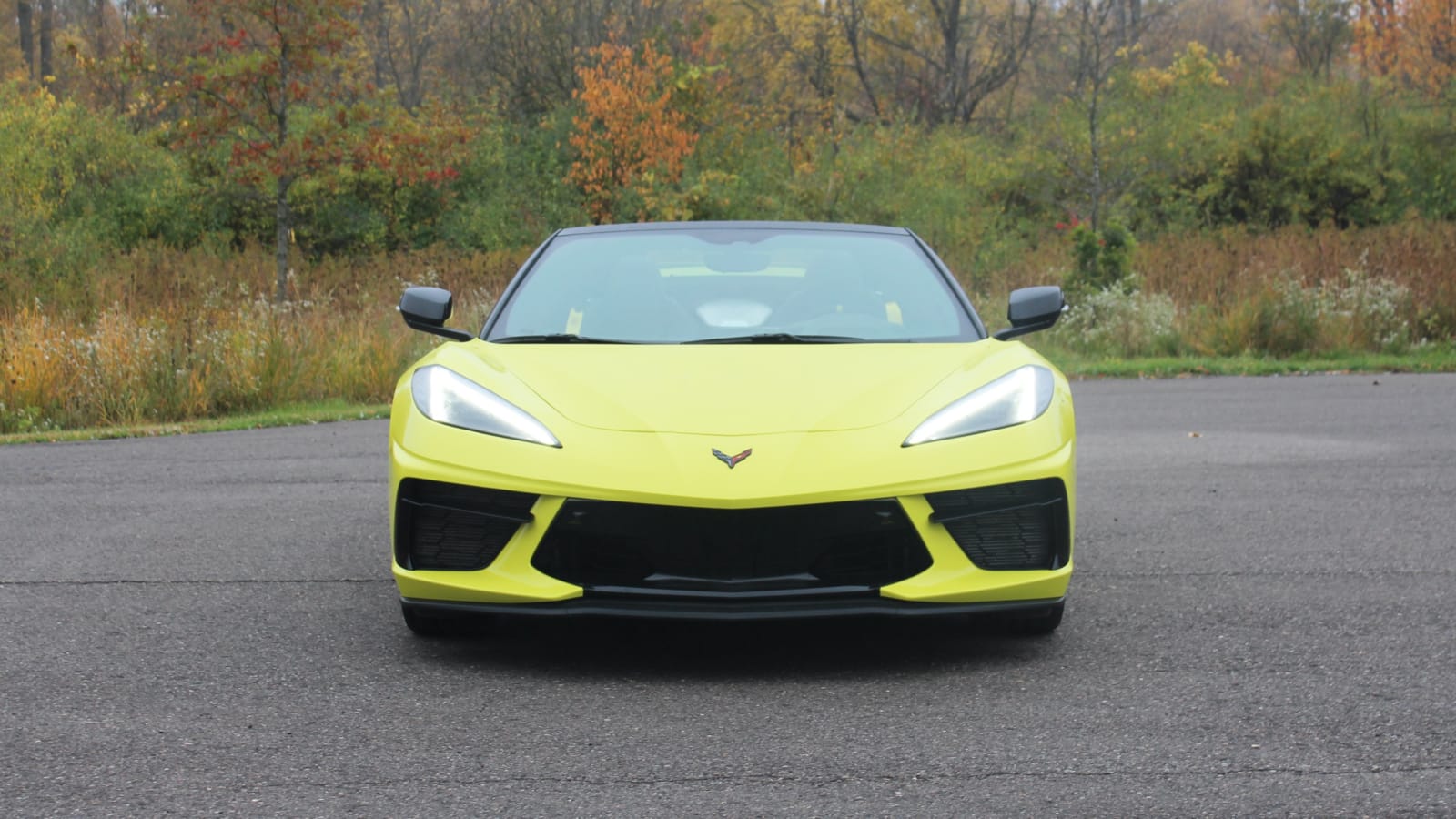 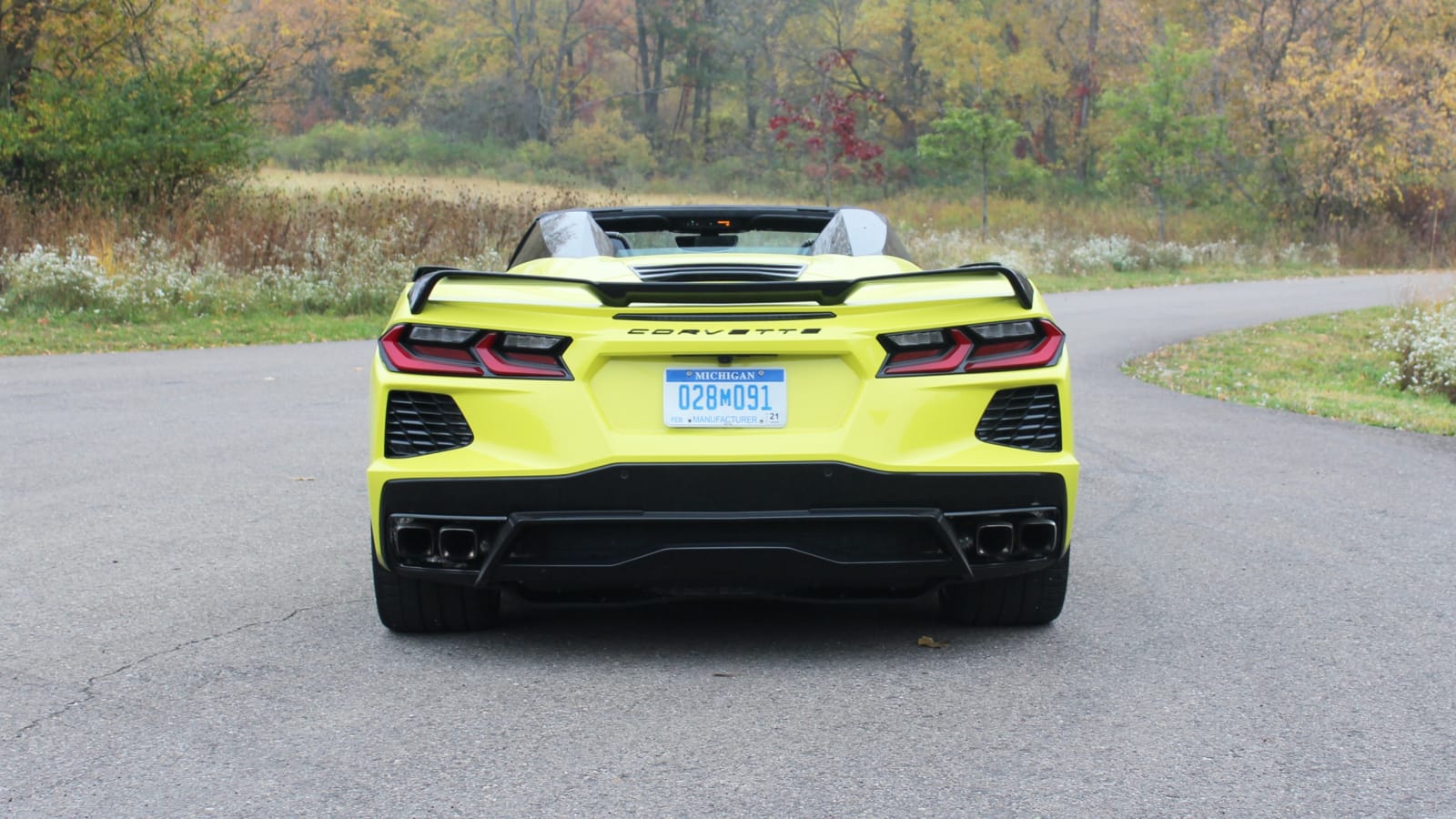 And yes, especially in this highlighter yellow, everybody looks at you.

By mid-week, Wollie’s school was abuzz about the yellow Corvette. For a humble kid who admonishes his parents with “Don’t be proud of me!” when he does something cool, Wollie didn’t seem to mind the extra attention he got in the school parking lot. It wasn’t vanity, but enthusiasm that had him shouting and waving to every friend and teacher — a contagious enthusiasm eventually had Wollie’s friends excitedly pointing out the car to their parents in kind. I, on the other hand, just wanted to close the top and rumble around in relative anonymity.

But the attention was inevitable. And I began to realize that it wasn’t the kind of attention that draws scrutiny. It wasn’t people thinking, “What kind of guy buys such a bright and loud car?” or “So this is what a mid-life crisis looks like.” It was mostly expressions of pure joy. People love seeing this car.

The owner of Bandito’s exuded a sense of reverence as he looked over the Corvette when I stopped for takeout. In one parking lot, I had a gentleman ask if he could snap some photos. “Of course!” I said. He asked if I wanted to be in the photo, too. I declined, but I did humor him with a raising and dropping of the roof. One of Wollie’s teachers talked about the designs he had on getting a C6 Corvette with a manual transmission. Not a single person derided the car’s mid-engine format (which is less loudly announced in the convertible). Everyone praised the styling.

So is the $7,500 for the convertible worth it? Yes and no. If you’re in it for the driving experience and want to get something supercar-ish in the $60,000 range, no. Our tester was optioned up quite a bit, though ($93,660, all in), and if you’re already spending north of, say, $75,000 on your ‘Vette, tacking on another 10% might be worth it. But, really, it depends on how often you’ll raise and lower the roof. Do you live somewhere subject to rapid changes in weather? Do you plan on stopping a lot, and want to secure your interior? Do you plan on making full use of the rear trunk often? If the answer to any of these is yes, the ease and the packaging of the automated convertible top are more likely to earn their keep.

And, there’s one more advantage: the rear window can drop down independently of the roof, allowing for airflow without the sun (good news for us vampires) and/or enjoying the full Corvette sound experience regardless of weather (good news for everyone). It’s not a selling point on its own, but, it’s one small, personal joy in a car that’s full of them. Why let the admiring fans have all the fun?