Yet another high-riding Mercedes-Benz G-Class prototype has been caught in the wild by spy photographers in Europe, giving us another taste of what Stuttgart has in store for the new generation of the venerable G-Wagen.

This is the second time we’ve seen a G-Class prototype being tested in this configuration. Previously, we speculated that it could be either the 4×4 Squared (4×4²) or perhaps something produced with help from long-time tuning partner Brabus, as some of the body parts resemble those found on the latter’s Adventure XLP concept.

Unfortunately, this new prototype doesn’t really help us narrow that down. It’s actually wearing more camouflage wrap than the previous car was, notably on the fenders and the fairing on the leading edge of the roof rack, both of which were uncovered on the previous prototype. While this could be significant, the most likely explanation is that unlike this white car, the example spied previously was not destined for public roads. 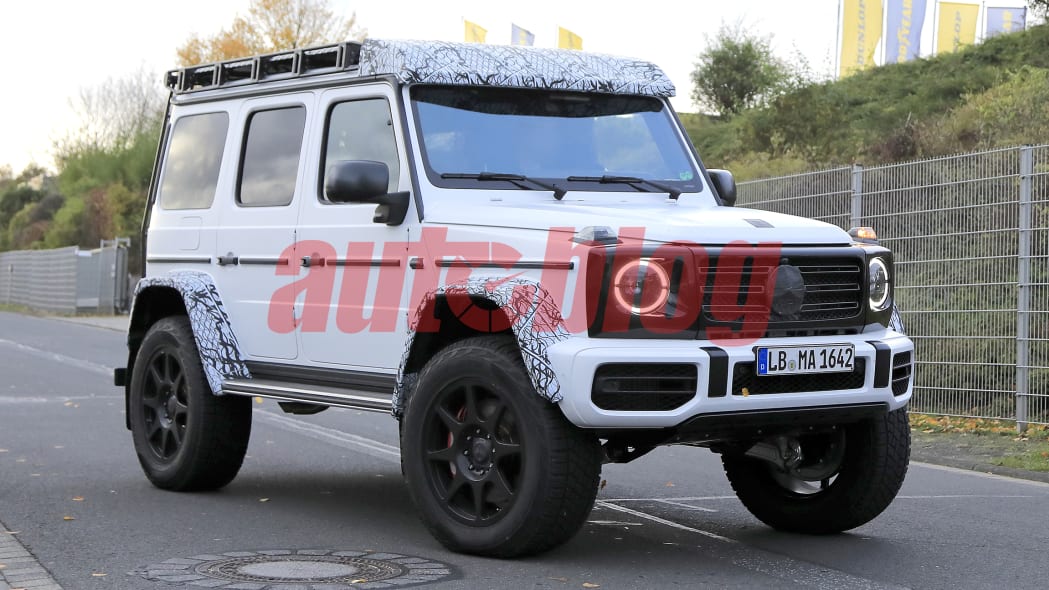 Apart from the camo wrap and paint finishes, the two appear to be configured the same way. The horizontal-bar grille finished in gloss black extends all the way to the edges of this prototype’s front end (which is more obvious against the white paint), and we can clearly see the telltale side-exit exhaust routing, flat black wheels and big brakes of a performance model. Since we’ve already seen the G63 (above left), it stands to reason that this is something else entirely.

Up close like this, we’re more inclined to believe we’re looking at an in-house model (hinting at the 4×4² rather than a Brabus, in other words) due to the relatively tame styling, if there is even such a thing when it comes to this outrageous off-roader. The last time around, the 4×4² received a jacked-up suspension,  portal axles, 22-inch wheels, meaty off-road tires and more than a foot of ground clearance. We expect the forthcoming iteration will more than match those specs.