In the minivan world, the 2021 Toyota Sienna is a very big deal. For starters, there aren’t a lot of minivan models any more ­– four in fact ­­­– so any completely redesigned version is noteworthy. Yet, this is also the first all-new Sienna in 10 years; a much lengthier gap between generations than usual, and one that resulted in its predecessor getting awfully long in the tooth despite consistent updates. A new Sienna has therefore been overdue, but Toyota at least used the extra years to develop a van that moves the ball far downfield.

What’s under a minivan’s hood rarely makes headlines, but in this case, it does. Every 2021 Sienna is a hybrid, foregoing the usual V6 and its low-20s-mpg fuel economy in favor of Toyota’s familiar gasoline-electric powertrain that returns an EPA-estimated 36 mpg combined. Sure, it’s not quite as quick as those V6-powered vans, but we’re not sure how much minivan buyers will care about that. The Chrysler Pacifica is the only other minivan available as a hybrid, but that’s a plug-in hybrid model that provides some all-electric range and carries a higher initial price tag.

Other upgrades include a bolder exterior and an interior that’s remarkably high-style for a minivan. Functionally, Toyota has lengthened second-row seat travel, providing extra cargo versatility and unmatched, sprawl-out legroom. In-car tech is upgraded with Toyota’s latest touchscreen infotainment system and driver assistance features. And in terms of innovative, family-oriented gadgets, the Sienna is the only minivan offered with a small built-in refrigerator, while it joins the Honda Odyssey in offering an in-car vacuum and a PA system that transmits the driver’s voice to the back seats.

In short, the 2021 Sienna is a bold update for a model that needed one. Its exceptional fuel economy and big-kid-friendly second-row seat are probably its main selling points over its competition, but in every other respect its fully competitive. With so few competitors, though, there’s no reason to not check them all out.

The Sienna’s front cabin is shockingly high style for a minivan – and here we thought the Pacifica’s was a bold stylistic departure. You can see each of the trim levels above. Controls are canted every-so-slightly toward the driver, while the high center console provides more of a car- or SUV-like feel. Nevertheless, that console is really just a bridge over a vast open canyon ripe for whatever you want to put down there (likely a purse). There are a number of other handy places up front to stow things, as well. That includes the available refrigerator (below, bottom left) and the wide, smartphone-holding tray (below, bottom right) that slices across the dashboard. Unfortunately, we found the little nubs used to hold your phone on that tray aren’t quite up to the job.

The standard 9-inch touchscreen infotainment display is easily seen and reached, and bordered by a number of physical buttons and knobs. It’s hard to beat the slick functionality of the Pacifica’s UConnect system, or the customizable menus in the Odyssey, but we didn’t have to deal with any of the major glitches or lagginess we’ve experienced in other Toyota infotainment systems. 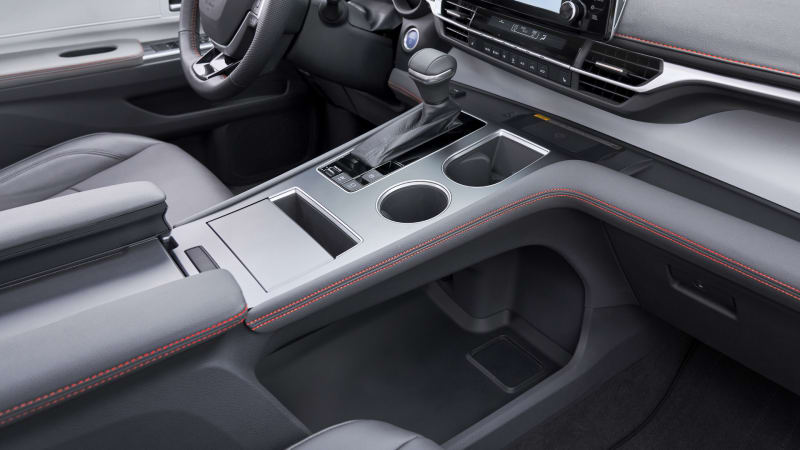 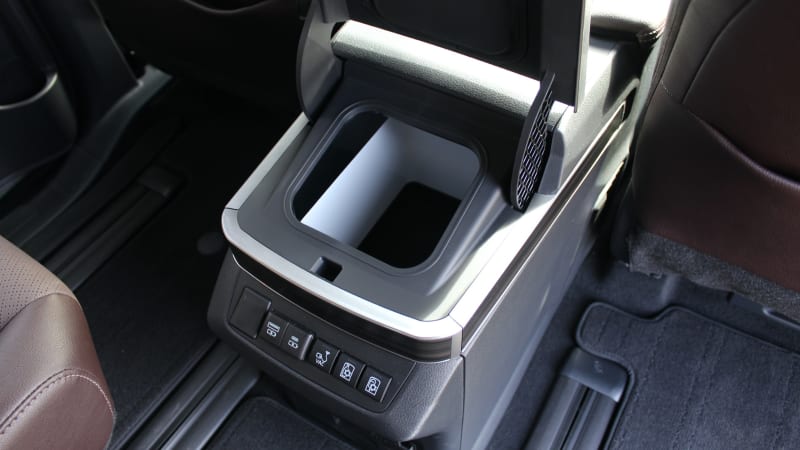 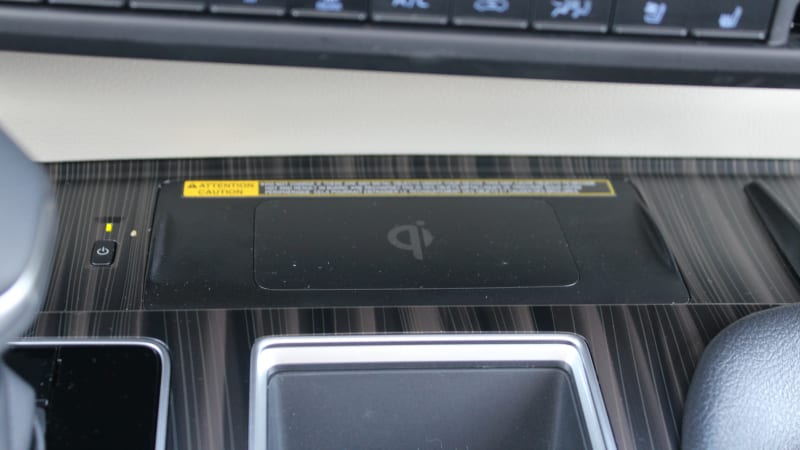 How big is the Sienna?

The Sienna is comparable in size to the other minivans. We didn’t find it any more maneuverable or less cumbersome to drive in tight places, and it offers the same sort of vast cargo space behind its third-row seat. Really, minivans differ in terms of their second-row seating concepts.

The Sienna offers a choice of two. The eight-passenger model is probably better suited to parents with smaller kids since it comes with a removable second-row middle seat that you can affix a child seat to while keeping the outboard seats open. The seven-passenger setup found on upper trim levels features the new “Super Long Slide” second-row captain’s chairs, which slide further than its competitors by a considerable amount. Slid to the rear, they provide enough legroom for NBA forwards to kick back and relax. They also slide forward all the way to the front seats, making it more likely to fit whatever you need inside without moving the seats (while being more comfortable than the Chrysler Pacifica’s Stow ‘N Go seats). A second lever folds the seat cushion up and the seatback forward to either provide an easy ingress into the third row, or to maximize cargo volume even further.

There are certainly advantages to Stow ‘N Go (for those who prioritize cargo-carrying versatility) and Honda’s “Magic Slide” second-row (for those with multiple small children), so there isn’t a right or wrong answer here. Choice is good. In this case, we think the Sienna’s concept is best suited for families with older kids.

Every 2021 Toyota Sienna is a hybrid. There’s a 2.5-liter four-cylinder and two electric motors, plus a third added to create the available all-wheel-drive system. Its battery recoups energy from the brakes and engine (it’s not a plug-in hybrid like the available Pacifica Hybrid, which has all-electric range and a higher price). Total system output is 245 horsepower, which is less than its V6-powered competitors.

Fuel economy is much better, though. Toyota estimates the Sienna will get 36 mpg combined with front-wheel drive in EPA testing and 35 mpg combined with AWD. The old Sienna got 21 and 20 mpg combined, respectively. The Odyssey and V6-powered Pacifica get 22 mpg combined. That’s a difference that should save you hundreds of dollars on gas every year.

The new hybrid-only Sienna certainly won’t be the top choice for lead-footed minivan drivers, but that’s a minority, if possibly an oxymoron. For everyone else, the new model actually weighs less than before, slightly mitigating the power loss, while the instantaneous nature of the electric torque make it feel quick off the line. You do have to live with droning from the CVT, though, especially when accelerating onto the highway.

Otherwise, the drive is smooth and mostly quiet. When not accelerating, the engine makes little sound. Noise from the wind and road are mostly filtered out before intruding into the cabin. The suspension is taut enough to provide good support for the Sienna’s long, bulky body, but not punishing over the craggy roads of southeast Michigan. This is in contrast to most versions of the old Sienna, which could be rather floaty. We used to suggest buyers go for the more controlled Sienna SE trim level, and although we haven’t driven the new Sienna SE and XSE, we don’t think it’s a must any more.

What more can I read and watch about the Toyota Sienna?

Our first review of the Sienna, covering in more detail its changes and new features. 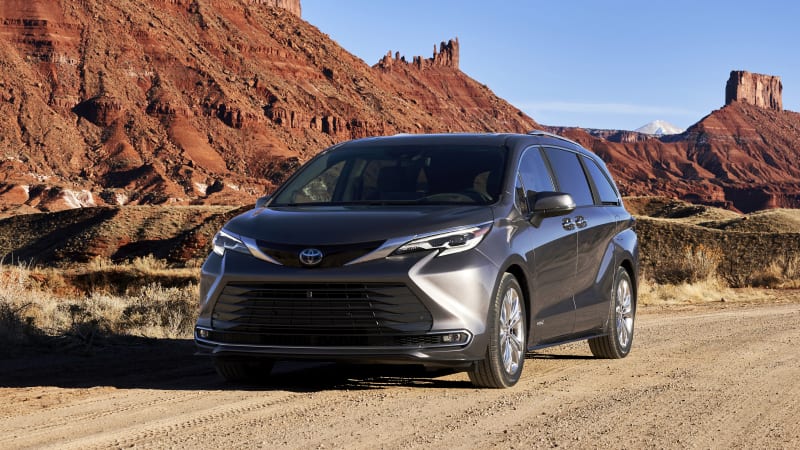 Senior editor John Beltz Snyder takes you inside the new Sienna Platinum AWD, showing off all the various places to stow your stuff.

You can find a complete breakdown of each trim level’s features, specs and local pricing here at Autoblog.

The 2021 Sienna has not been crash tested by a third party.