Tesla’s move from niche luxury vehicle maker to mass-market manufacturer has begun to take shape after the number of its US-built electric vehicles (EV) on UK roads trebled within a year.

A new study compiled by national accountancy group UHY Hacker Young showed that Elon Musk’s California-based carmaker has grown its UK car parc by 336% the past 12 months, rising from 27,000 to 90,900.

The move has seen the group, which has continued to sell cars with the support of stores owned and operated by the brand despite a 2019 plan to move wholly online, outstrip the wider EV car parc growth of 61% in the same period, it said, with Milton Keynes identified as the hot sport for Tesla ownership.

UHY said that, while the brand still has only a small share of the overall new car market in the UK, its growth is likely to continue this year as “Tesla’s highly-developed online sales model proved resilient to coronavirus lockdown while car dealerships were forced to close”.

Milton Keynes’ local authority has worked hard to implement policies which encourage the use of EVs, UHY said, installing 106 electric charging points per 100,000 people – the highest proportion in the UK outside of London.

It is also the location of one of twenty-two UK Tesla dealerships.

“A lack of public charging points is one of the big barriers to adoption for many consumers.

“Milton Keynes shows what happens when a town prioritises provision of that vital infrastructure, it is a model that other local authorities may follow.”

Kendrick added: “Stirling is a Tesla hot spot, which may come as a surprise to some. Its proximity to both Glasgow and Edinburgh has made it a real pocket of wealth, with a lot of affluent commuters choosing Teslas for their journeys into the cities.”

Tesla stole an early march on the EV sector through development of its Supercharger EV charging network, which offers exclusive access to owners across the UK.

As other, more established brands roll out rival products, however, the pace of growth of the wider public charging network is growing – despite the impact of COVID-19. 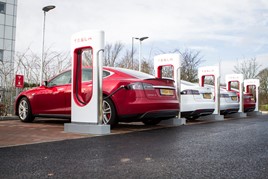 EV charge point mapping and payment provider, Zap-Map, revealed this week that the number of EV charge point devices is already more than 15% higher than in 2019, at 20,072 with many of these being newer rapid and ultra-rapid chargers.

Every month more than 500 charge points, of which about 100 are rapid chargers, are being added to Zap-Map.

Melanie Shufflebotham, co-founder of Zap-Map, said: “We anticipate that that demand will only increase and, as the EV range expands across various manufacturers, Zap-Map has committed to developing tools for dealers to use to support the sale of EV and overcome any consumer concerns about owning an EV.”

The Society of Motor Manufacturers and Traders (SMMT) new car registrations data for October showed that overall EV market share was 12.1%, up from just 4.4% year-on-year.

Reports this week have suggested that Prime Minister Boris Johnson may be poised to outline plans to bring forward the current 2035 ban on the sale of new petrol and diesel vehicles in a bid to accelerate the nation’s emissions-cutting Road to Zero plan.