The 2021 Kia Telluride, which company reps have taken to calling the “Sell-uride” due to its incredible popularity, is one of our favorite three-row crossovers. The Telluride may have been named for a mountain town in Colorado, but one of the key features of a large crossover is its cargo area, which in this case has more in common with another geographical feature. With the second- and third-row seats folded flat, the Telluride’s cargo space is positively cavernous.

That said, it’s not actually the best stuff-hauler in the segment. That nod goes to GM’s three-rows, as we’ve demonstrated previously, followed by the Volkswagen Atlas. But not being the best doesn’t automatically make something bad, and the fact of the matter is that any of these large utility vehicles can accommodate quite a bit of cargo when called upon to do so. Normally, we illustrate this with a luggage test, but since I live alone and travel light, I’m ill-equipped to replicate Autoblog‘s usual formula. Fortunately for you, dear reader (but definitely not for me), I’ve had to relocate several times over the past few years, and in the process I’ve amassed quite the collection of U-Haul boxes. For some more conventional context, I also grabbed a hard-sided cooler (approximately 19 1/2″ x 11″ x 14″) and my carry-on half-duffle (24″ x 11″ x 9″), the latter packed with some clothes to give it some structure for the purposes of this test.

U-Haul’s medium-sized moving boxes are conveniently (almost) cube-shaped at 18 1/8″ x 18″ x 16″ (L x W x H), checking in at 3 cubic feet each per the company’s description. That’s a great figure to have on hand for this test, as it translates nicely to manufacturer specs. Kia says the Telluride has 21 cubic feet of cargo space behind the third row, 46 behind the second and a whopping 87 cubes with everything behind the first row folded flat. 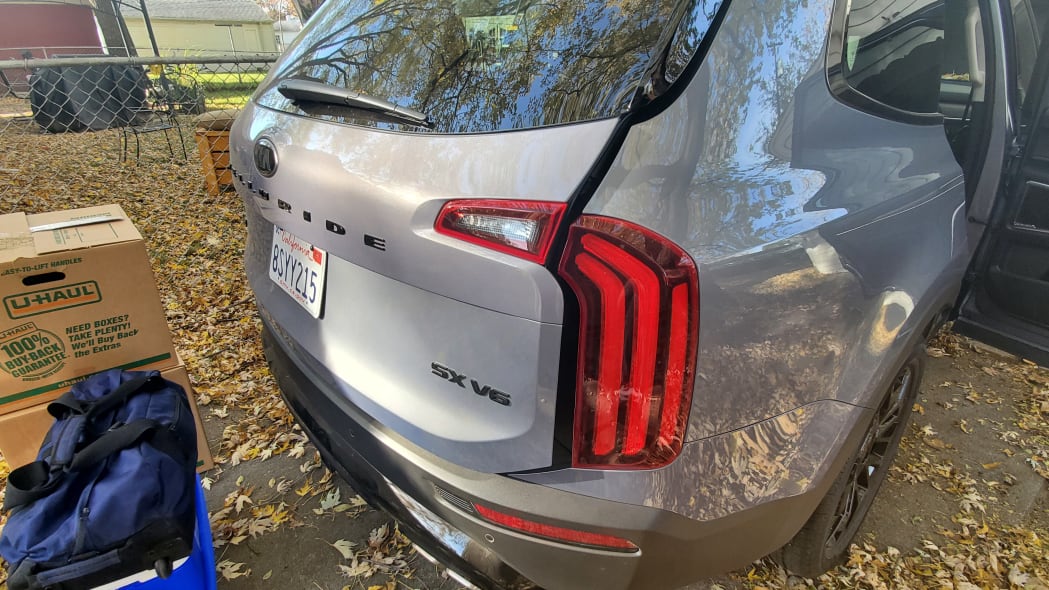 That should translate to seven U-Haul boxes behind the third row, 15 behind the second and 29 with everything stowed, right? Well, as often happens, reality dictates otherwise, and we had to throw the whole hypothesis out the window after putting just one box behind the Telluride’s third row. While it appears at first glance that at least one box will fit back here since it sits entirely in front of the liftgate sill, we can plainly see that the interior trim on the hatch protrudes too far into the cargo area for it to close. 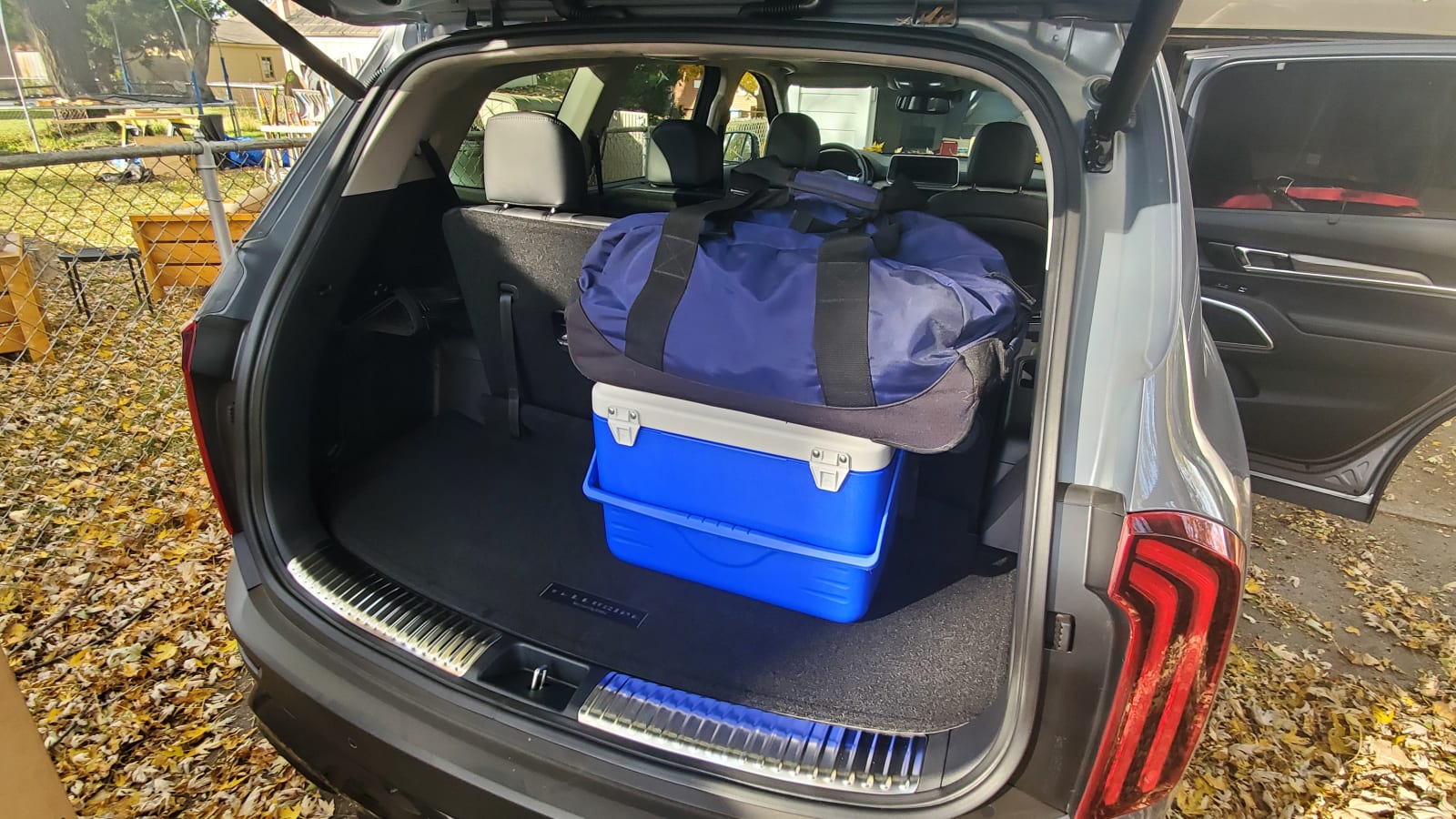 Seven boxes behind the third row? Nope, more like zero. Of course, the cubic-feet number is one of volume, so perhaps seven boxes worth of packing peanuts or ping-pong balls would fit back there, but I didn’t have any of those, either.

I did have that carry-on and cooler and they fit back there just fine, whether side-by-side or stacked. Now, once we drop the third-row seats, things start to look up. Remember, Kia says the Telluride has 46 cubic feet of cargo space behind the second row, which should theoretically accommodate 15 U-Haul boxes with room to spare. Let’s see how well that translates to the real world. 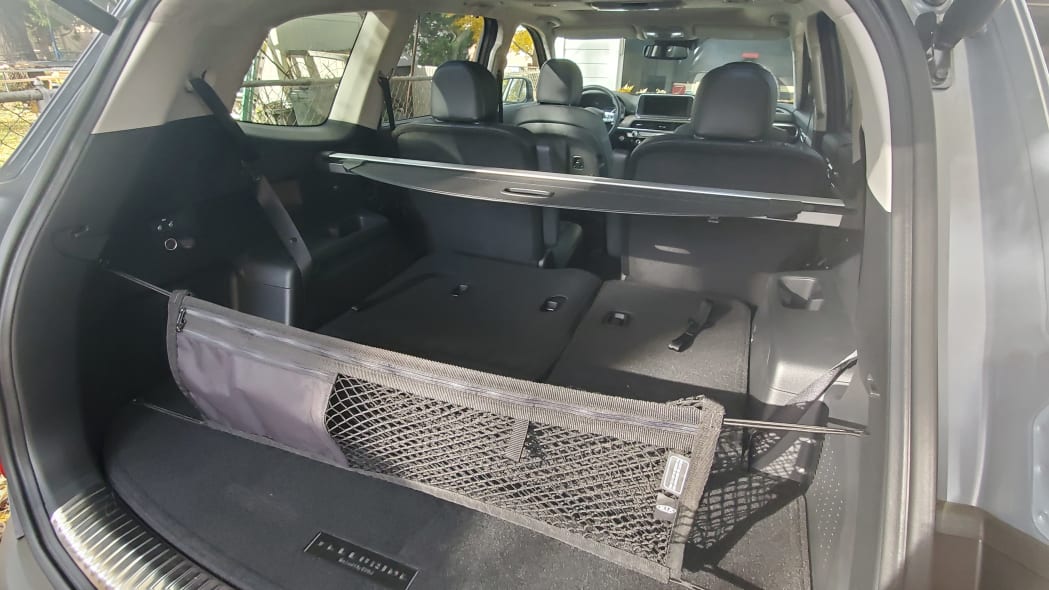 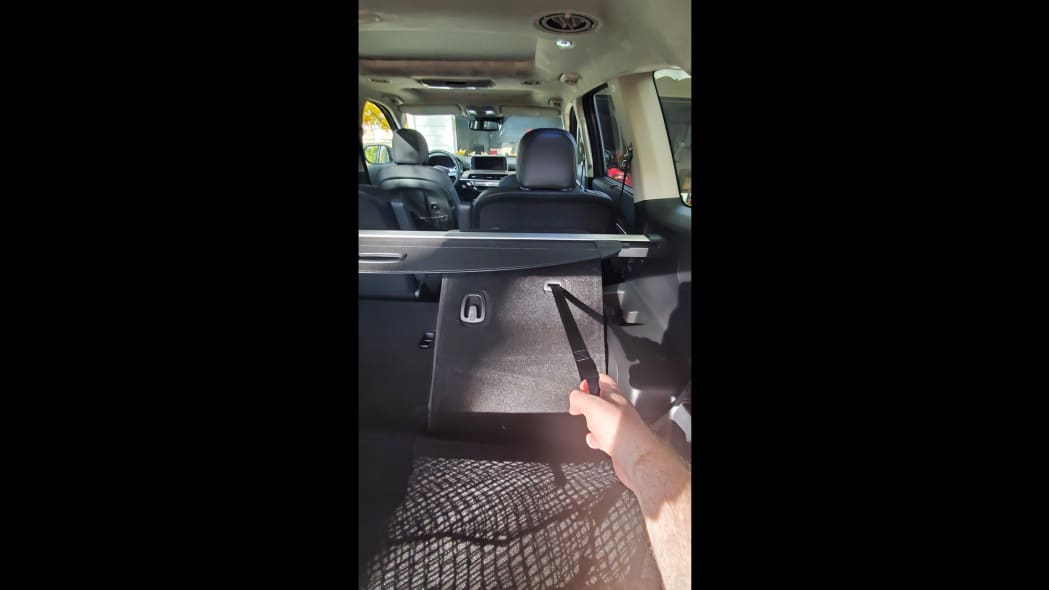 But first, there are a few things to note about the Telluride’s cargo area. As you can see, our ’21 SX model comes with a cargo net and privacy cover. The former can be stowed underneath the floor behind the third row, which is a great feature. Normally, you have to leave it behind or if you forget, put it on your passengers’ laps. Not ideal. 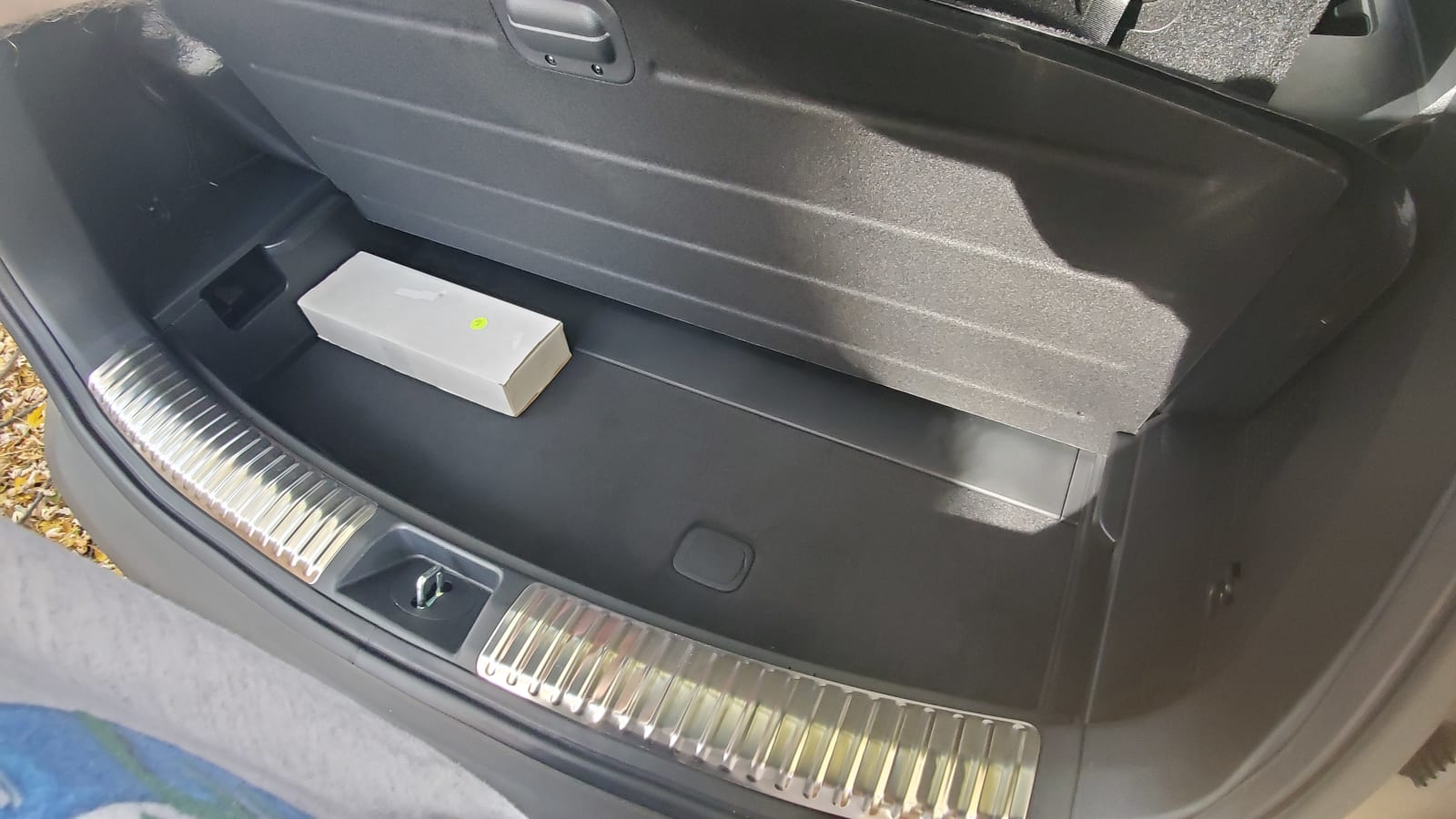 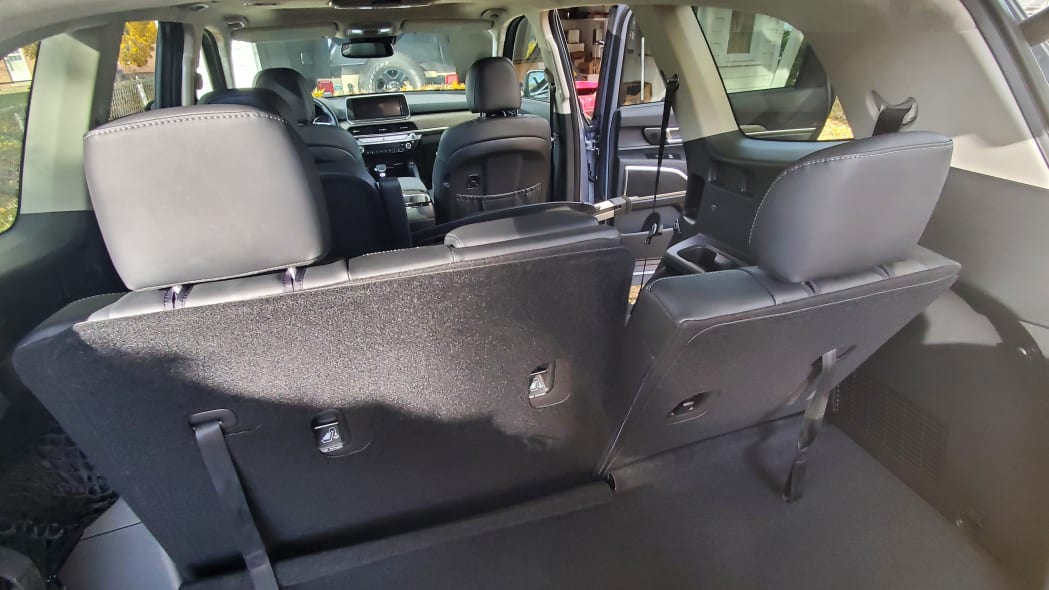 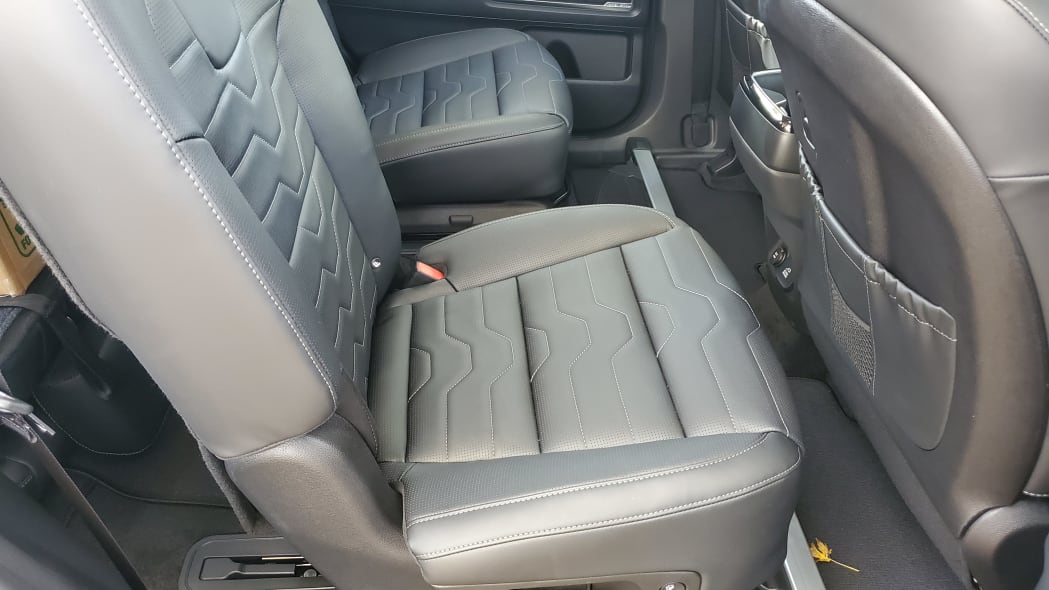 The space also has a few other handy features you might not notice at first glance. Beneath the rather thick cargo carpet in our loaner is that under-floor storage bin, which is accessible with the third row up or down. Both the second- and third-row seats have reclining backs, and the second-row seats are on sliding rails for third-row passenger access. The above right photo shows the passenger-side seat in its third-row ingress/egress position, while the driver-side seat is locked as far forward as it can be, preserving plenty of second-row legroom. These also allow some adjustment in terms of cargo space, and for the purposes of these tests, we put them in their forward-most locking positions and put all of the seatbacks upright. 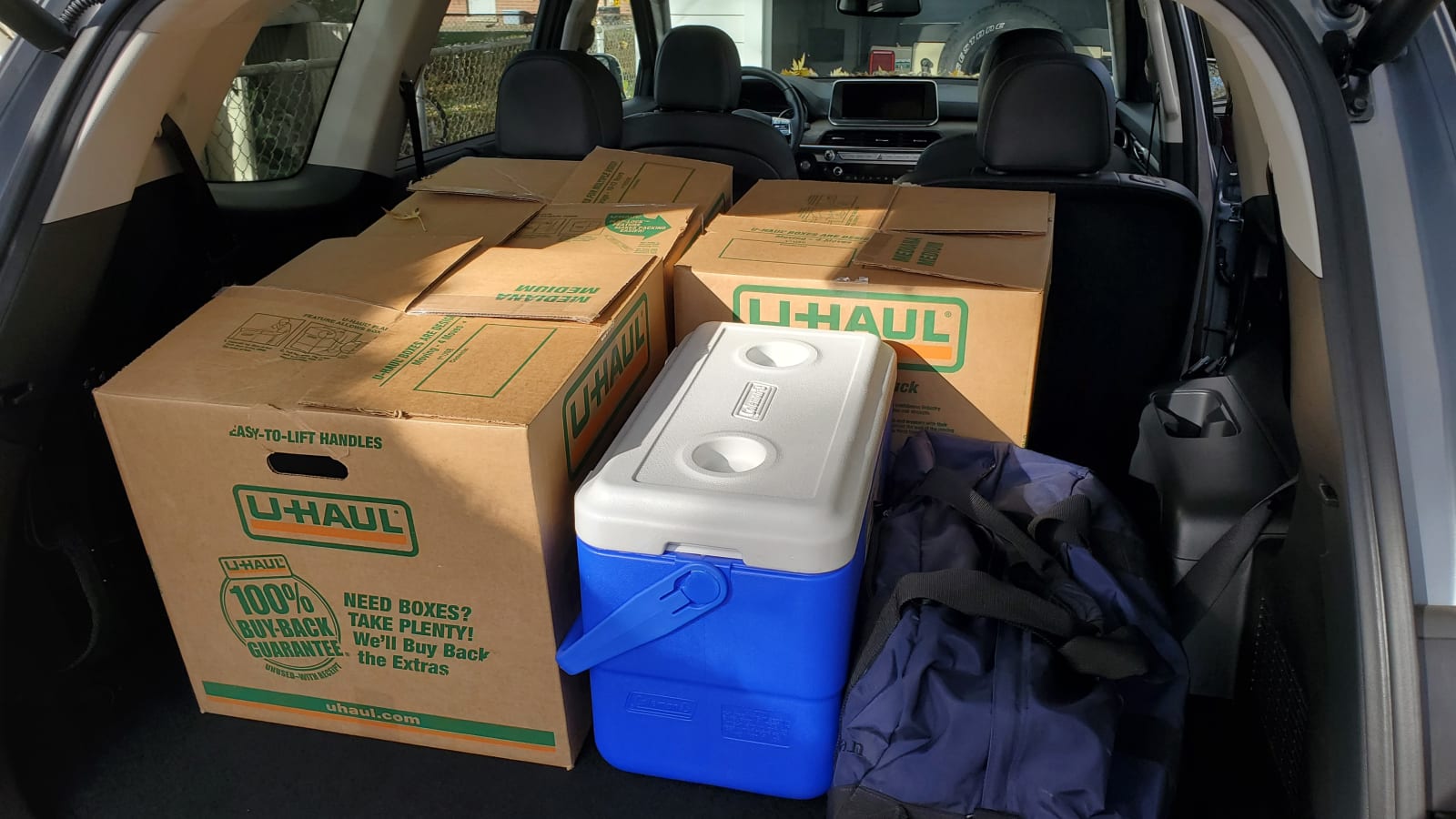 This is the Telluride’s cargo-carrying sweet spot. As you can see, boxes can be fit two-deep in this configuration with room to spare. Unfortunately, there is not enough vertical clearance to stack them, likely due at least in part to the panoramic moonroof. In this configuration, we could probably get five Uhaul boxes and several more coolers/carry-ons into the rear cargo area — still well short of the literal 15 boxes it “should” be able to accommodate on paper, although again, we didn’t have packing peanuts. The good news is that this particular cargo haul would leave plenty of room to recline the second-row seats as much as your rear passengers might like. 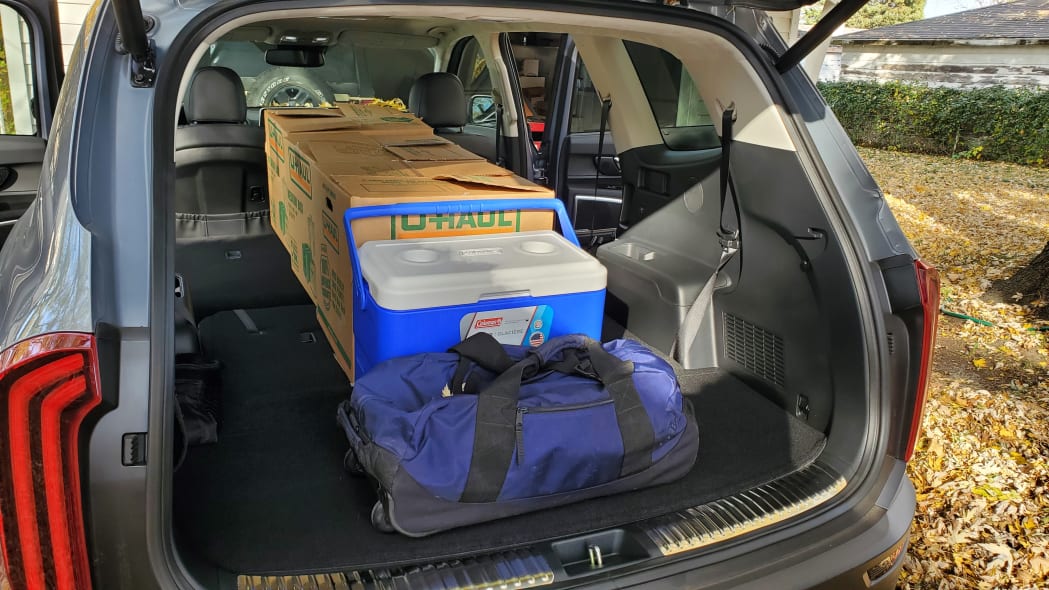 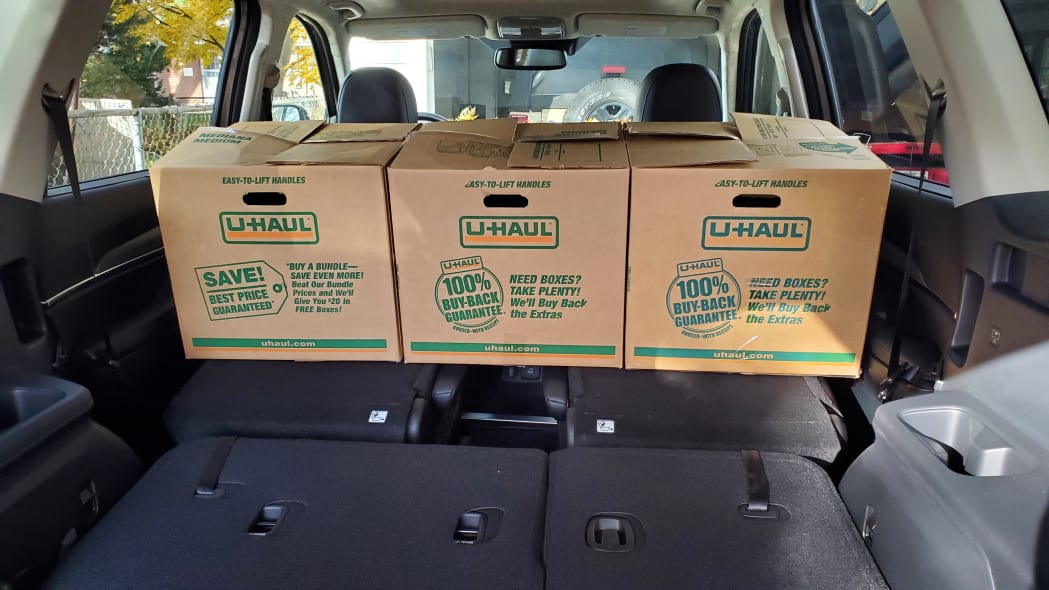 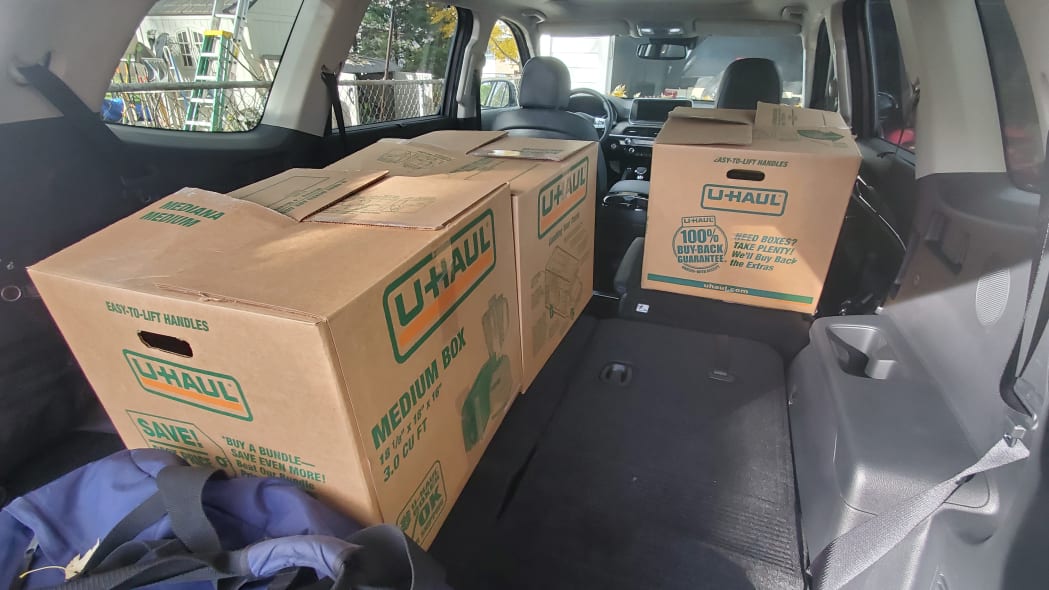 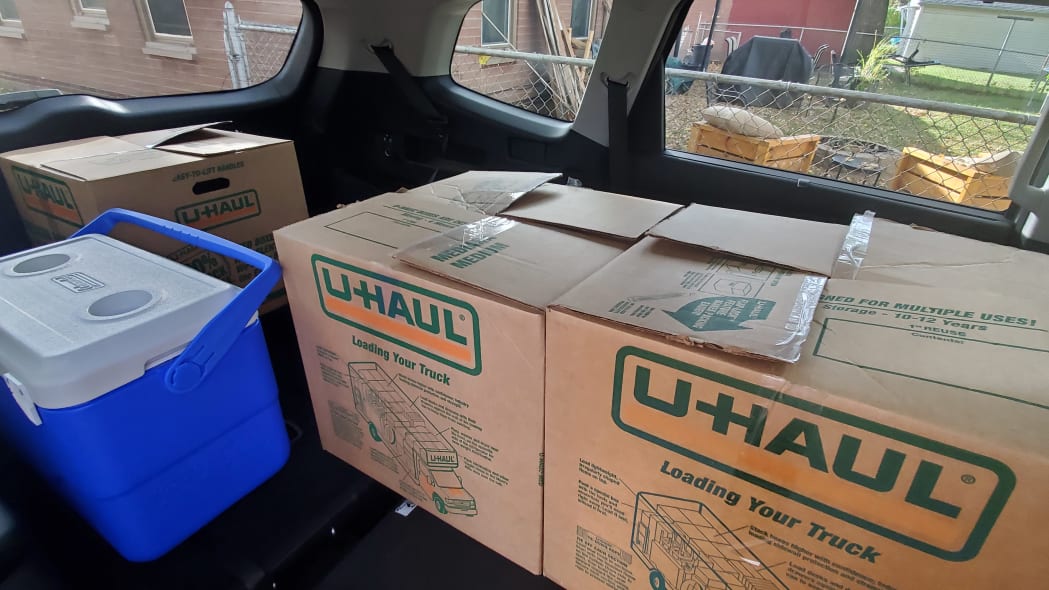 Once we drop the second row, we’re really cooking. Note that the second-row captain’s chairs do have a gap between them, but even a U-Haul box could bridge that without any help. If you’re carrying a large quantity of smaller items, however, you’ll want some sort of mat (or even a large, folded cardboard box) to cover the gaps. In this configuration, we could theoretically fit eight U-Haul boxes (3+3+2) in a single layer (there’s still not enough room to stack them, even on top of the folded second row) and quite a few miscellaneous items. The U-Haul boxes will even fit four-deep if placed end-to-end right down the center of the Telluride’s cargo area, but that will severely limit what can be placed on either side, and that’s about the least-efficient way to try to load these particular items.

So, is there any universe in which a Telluride’s cargo space can be fully utilized by U-Haul boxes? Most certainly not, but the real take-away here is that manufacturer numbers only tell part of the story, and if you have a particular cargo-hauling need in mind, it’s best to take a look at your next vehicle purchase in person if at all possible, just in case.