The 2021 Chrysler Pacifica offers something no other minivan can match: a plug-in hybrid model that can go 32 miles on electricity alone and therefore slash your annual fuel bill. It also costs less than the regular V6 version (and Toyota’s traditional, non-plugged-in hybrid Sienna) when you factor in federal and state tax credits, and we even like driving it more. In other words, the Pacifica Hybrid is the one to get.

But is that novel powertrain enough to make the Pacifica a better choice than the scarce number of other vans? Well, considering that the V6-powered version can hold its own against the Honda Odyssey, Kia Sedona and Toyota Sienna (literally the only other options), the answer is ultimately yes. The Pacifica Hybrid is indeed our top choice in the segment, but with so few rivals, we still recommend checking out the full field – especially the all-new Sienna. It’s also worth noting that Honda, Toyota and Kia have stronger reliability ratings than Chrysler, while the Hybrid’s higher monthly payments may not fit your budget despite the hefty one-time tax refund. In any event, no minivan search is complete without at least considering the Pacifica.

The Pacifica gets its first comprehensive set of upgrades since being relaunched as a minivan back in ’17. The front end has been restyled and LED lighting applied as standard front and rear (the budget-oriented Chrysler Voyager maintains the Pacifica’s old look). The Pacifica also now matches its rivals by including a full suite of driver assistance and safety technologies as standard equipment. Infotainment technologies have also been upgraded: Chrysler’s latest UConnect interface is paired with a standard 10.1-inch touchscreen; standard Apple CarPlay and Android Auto have been upgraded to wireless connectivity, and Amazon Alexa has been added. New available equipment includes USB-C ports, wireless smartphone charging, the FamCAM rear interior camera, and new games for the rear seat entertainment system.

Also new for 2021 is the option of all-wheel drive and the range-topping Pinnacle trim level. The Pacifica Hybrid has also been changed to a powertrain option for the Touring, Touring L, Limited and Pinnacle trim levels – it was technically a separate model before. This is simpler. 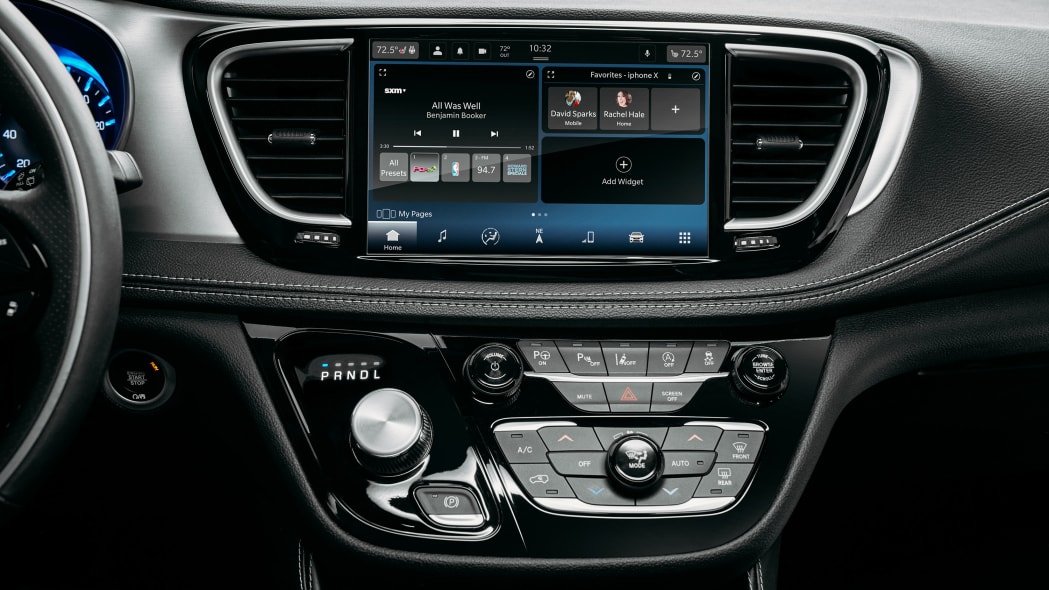 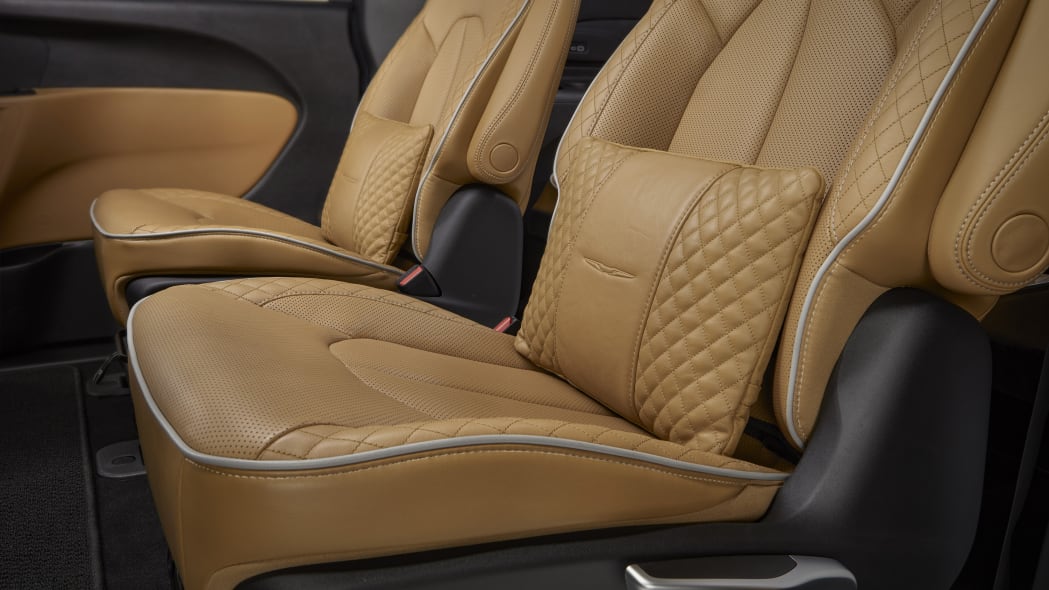 The Pacifica interior is a lovely place to spend time. It may not be as eye-catching as the new Toyota Sienna’s car-like cabin, but it’s far more appealing than the Honda Odyssey’s frumpy appliance look.Up front, there’s plenty of room to stretch out, and lots of places to stash items within easy reach. We’re big fans of the huge cupholders, which are capacious enough to house two 32-ounce Nalgene water bottles side by side. The materials are nice, with good attention to detail. We’re quite fond of the perforated leather seats, smooth leather steering wheel and attractive stitching in our long-term Limited test van, but things get even ritzier for 2021 with the new range-topping Pinnacle trim level that adds quilted leather seats and matching cushions for the second row (above right).

As for tech, the UConnect infotainment system’s quick responses and user-friendly layout had already made it our favorite in the segment (and possibly the entire industry), but it gets even better for 2021 with an updated interface, a bigger standard screen (10.1 inches) and new features like wireless Apple CarPlay and Android Auto. Wireless smartphone charging is also now available. Upper trim levels can be equipped with a rear-seat entertainment system that uniquely has screens mounted in both front seats rather than a single screen overhead.

There are also a few novel features that were previously only available on rival vans, including the in-car vacuum (not available on Hybrid) and the new-for-2021 FamCAM lets you watch the kids punching each other from the main infotainment screen. Keep in mind, though, that many of the whiz-bang features are exclusive to upper trims. 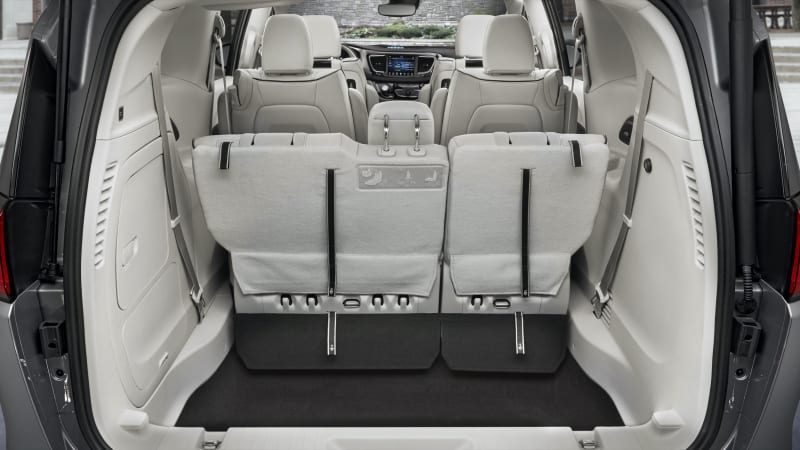 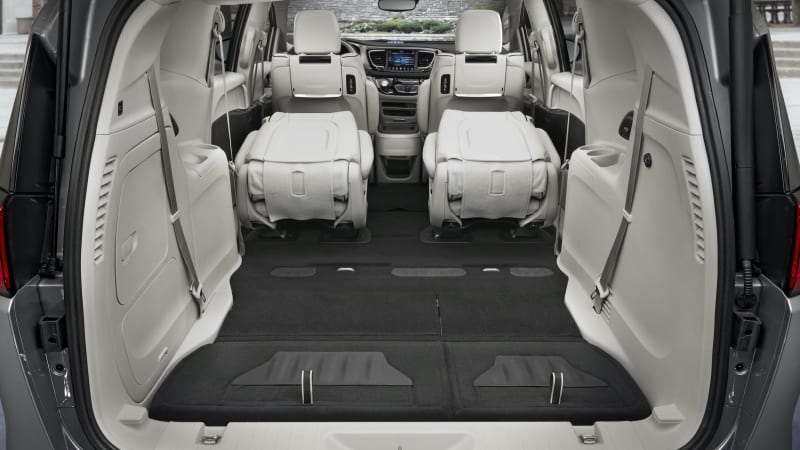 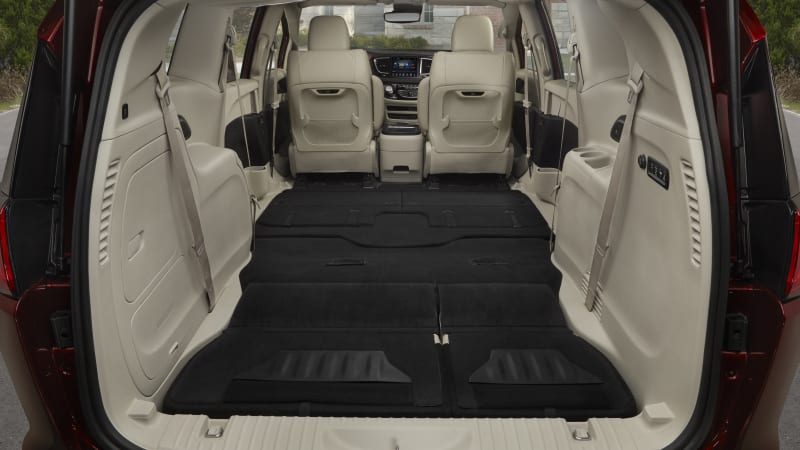 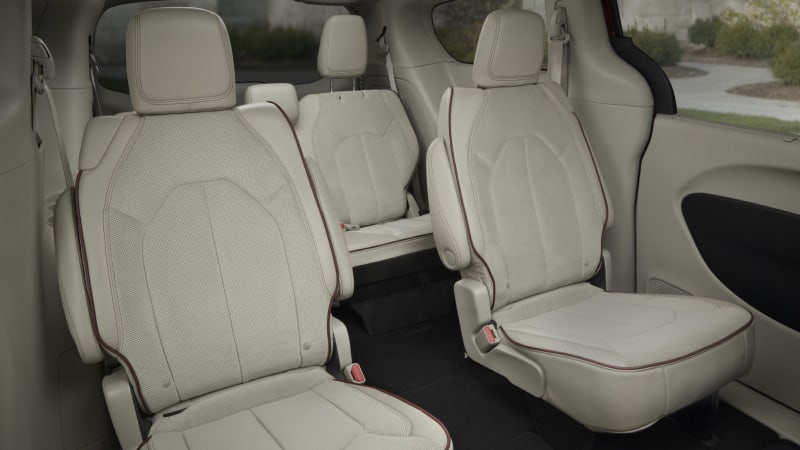 How big is the Pacifica?

The Pacifica is basically the same size on the outside as its minivan competitors. They’re all so big that an inch here or there really doesn’t make much of a difference. That goes for finding a big-enough parking spot and then maneuvering into it. Cargo space behind the raised third row is also effectively equal among all the vans.

Things change once you start lowering seats, however. Every minivan has a different second-row seating format, and the Pacifica’s claim to fame is the Stow ‘N Go captain’s chairs that fold into the floor. This lets you quickly transform your van from people carrier to stuff hauler without giving yourself a hernia lifting seats out. The downside is that the seats themselves aren’t as comfortable as the second-row captain’s chairs found in rivals – or those in the Pacifica Hybrid, which doesn’t have Stow ‘N Go (its battery takes up the underfloor stowage space). Note that the Pacifica’s eight-passenger configuration adds a small seat between the captain’s chairs that does need to be physically removed. It’s basically the same as what you’d find in the Odyssey and Sienna. 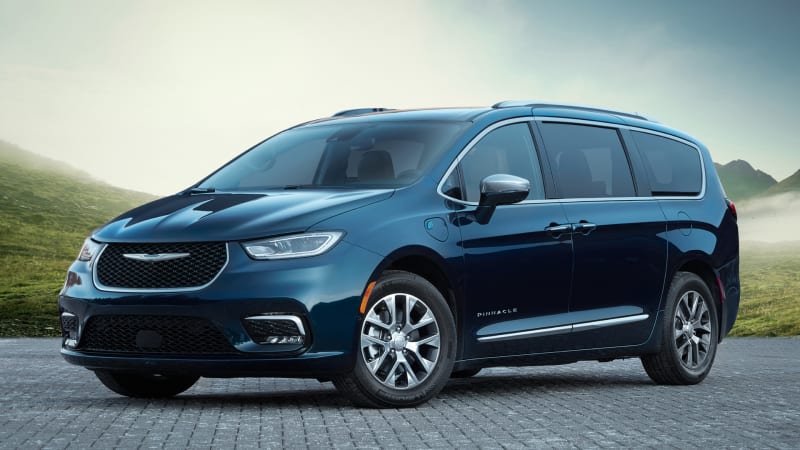 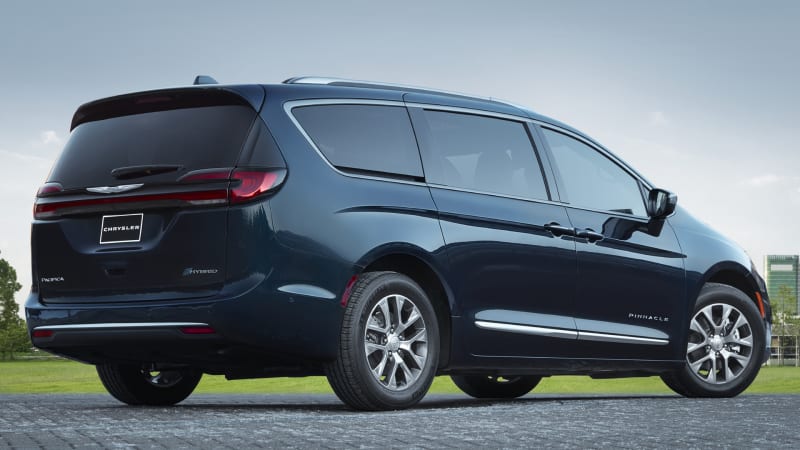 The Pacifica’s standard engine is a 3.6-liter V6 that produces 287 horsepower and 262 pound-feet of torque. It is paired to a nine-speed automatic. Front-wheel drive is standard, but for 2021, all-wheel drive is an option. The Toyota Sienna is the only other van that offers AWD. EPA-estimated fuel economy is 19 mpg city, 28 mpg highway and 22 mpg combined with FWD and 17/25/20 mpg with AWD.

The Pacifica Hybrid is a plug-in hybrid, meaning it has a big battery pack that can deliver 32 miles of all-electric range. That range is replenished, as the name would suggest, by plugging it in – preferably into a home charging station for quicker charging times. However, once that all-electric range is depleted, the Pacifica Hybrid still acts as a regular hybrid (much like the Toyota Sienna) that uses both its electric motor and 3.6-liter V6 to achieve an EPA-estimated 30 mpg in combined driving. Its total output is 260 hp.

The standard, gas-only Pacifica delivers ample power and on-road comfort, with steering and handling that don’t completely ignore a driver’s preference for actually feeling what the car is doing dynamically. It behaves less like an appliance than the Honda Odyssey, for instance.

Where things start to get really interesting is with the Pacifica Hybrid. With the electric powertrain’s low-end torque, it is quick to get moving from a stop without drama. It is supremely smooth and quiet when running on electricity only, which it can do for 32 miles. With that amount, it’s certainly possible to do a day’s worth of commuting, school drop-offs and errands – and the more you use that all-electric range, the less gas you use. As an added bonus, the Pacifica Hybrid is also the better handling minivan thanks to its 568-pound battery pack located low in the chassis between the axles. It’s actually quite the surprising difference.

What more can I read about the Chrysler Pacifica? 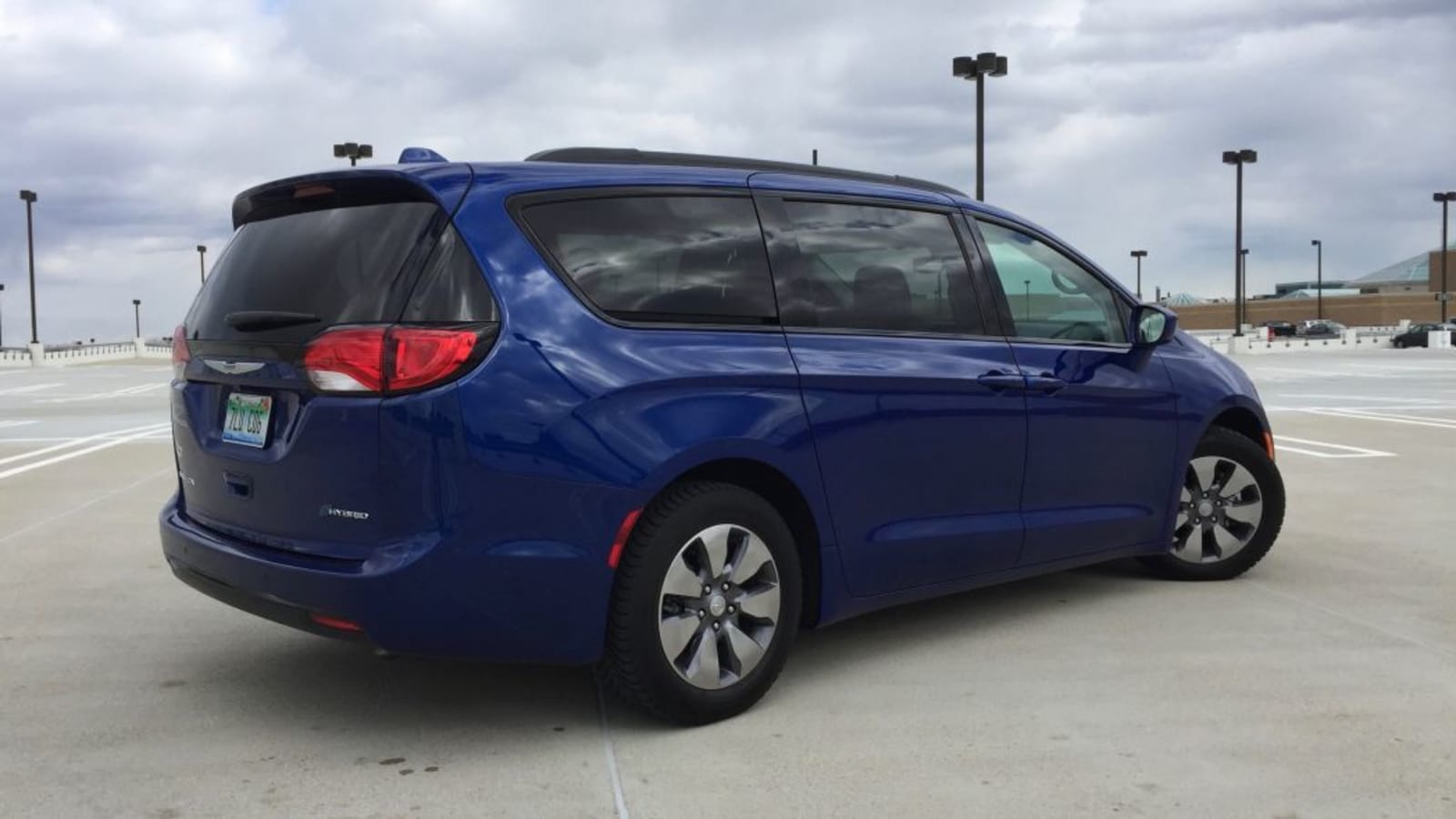 Autoblog tested a Pacifica Hybrid for one year to get a better idea of what it’s like to live with this unique minivan.

“The Pacifica Hybrid is easily our new top pick for this segment, as it offers something the Honda Odysseys and Toyota Siennas of the world simply can’t. And yeah, we’re pretty excited about it.” 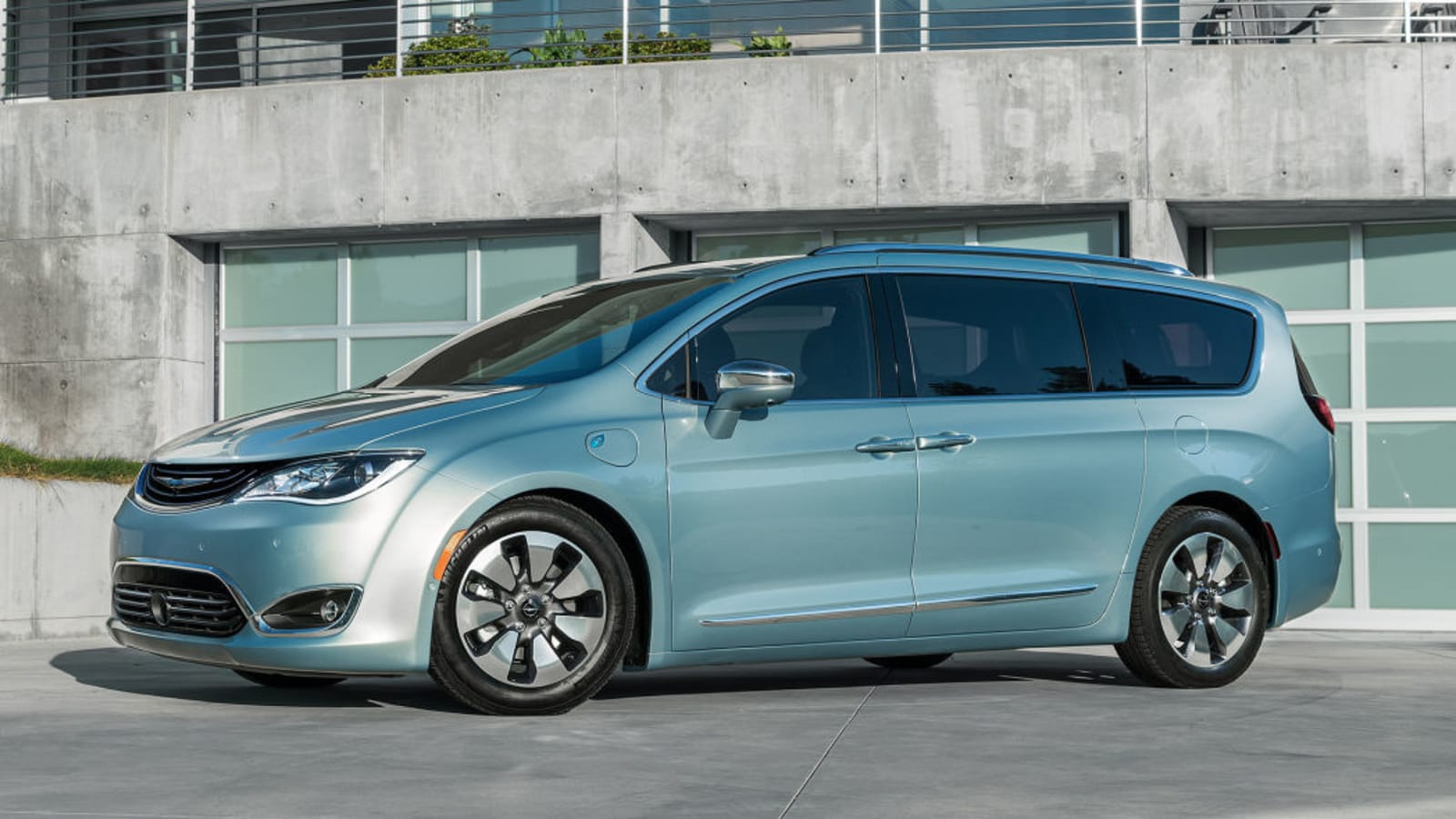 One of the fathers on staff puts his large son in the Pacifica Hybrid for a real-world review. 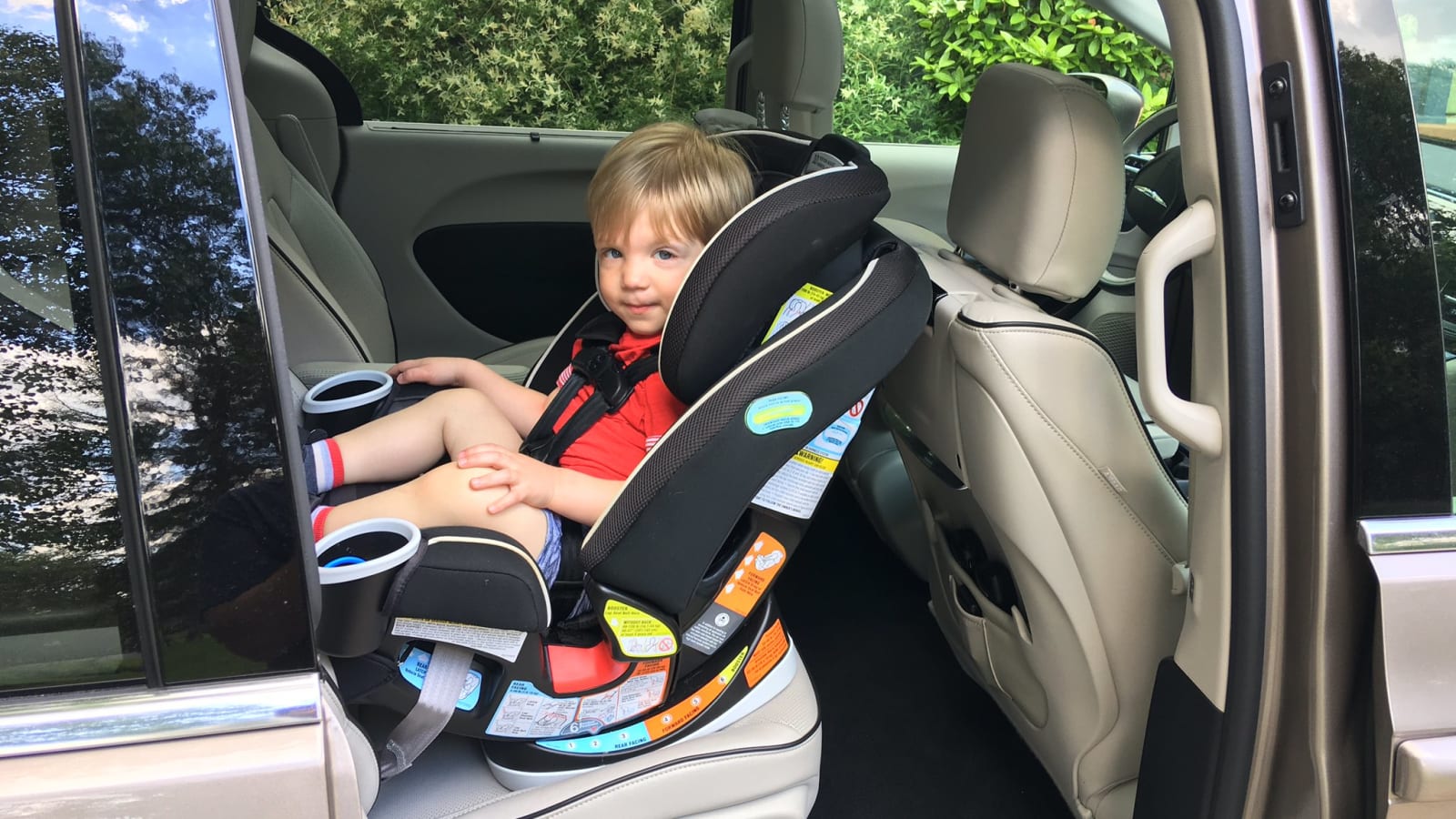 Our West Coast Editor put the plug-in minivan through its paces to see how it fared with some actual elevation changes. 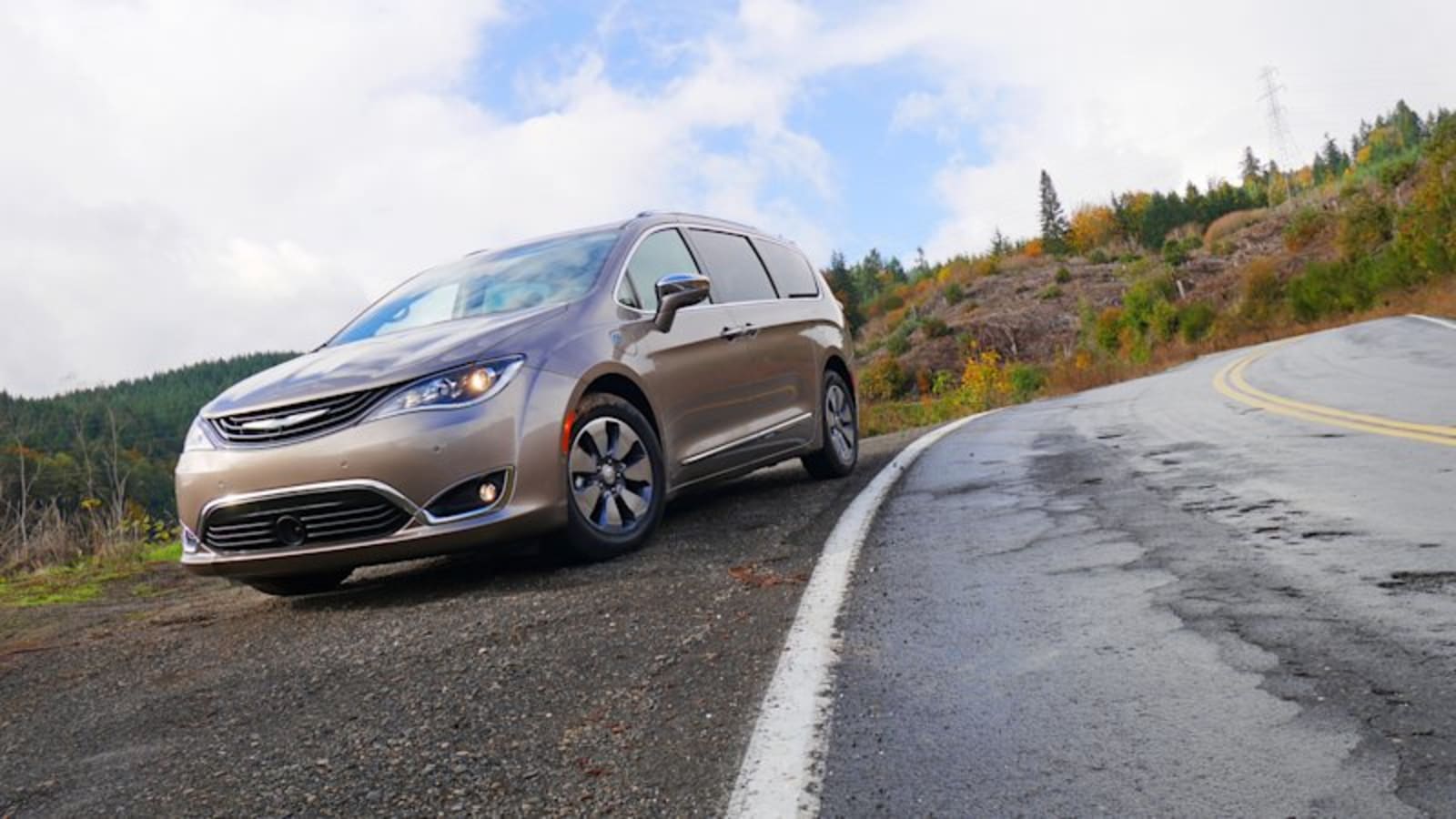 Pricing starts at $36,540 for the base Pacifica Touring, including destination. However, this is a bit deceptive since that’s not really the Chrysler base minivan. The Chrysler Voyager is basically a decontented Pacifica with last year’s styling (you can see the two below). Its base L trim level starts at $28,730, making it the cheapest minivan for sale. There’s also an LX trim level that bridges the gap to Pacifica.

You can find a rundown of the other trim levels’ feature content, specs and local pricing here on Autoblog for the regular Pacifica and for the Pacifica Hybrid.

Prices for the Pacifica Hybrid are below, but keep in mind that it is eligible for a $7,500 federal tax credit and potential state-level credits. You can get as much as $10,000 off your tax bill depending on where you live. In other words, the Pacifica Hybrid can be cheaper than the V6-powered model before you even factor in the reduced fuel costs. 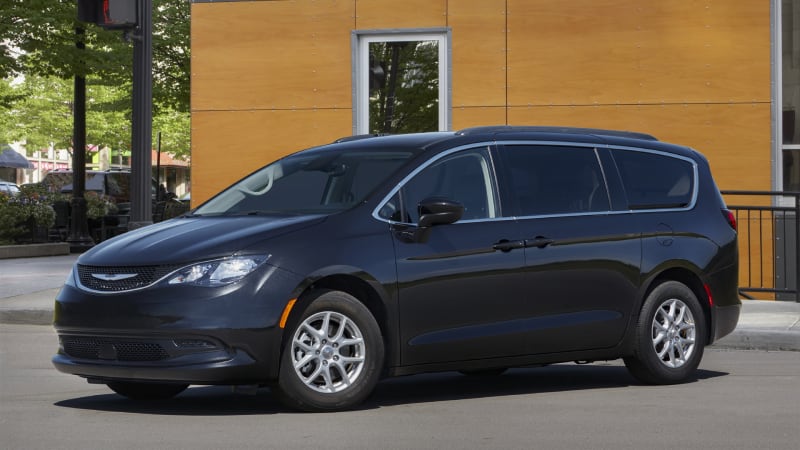 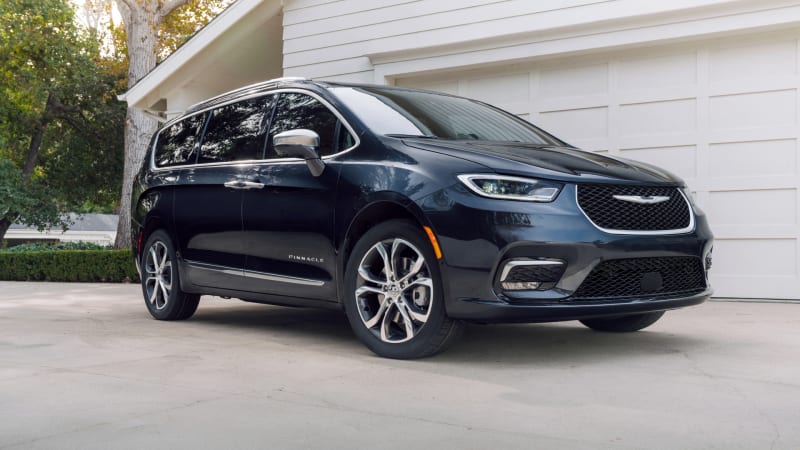 The 2021 Pacifica gets an infusion of standard safety equipment as a number of items migrate from the options list. Every trim level now includes full-speed forward collision warning and automatic emergency braking (detects pedestrians as well as other cars), lane-departure warning, lane-keeping assist, blind-spot and rear cross-traffic warning, and a rear parking sensors.

The National Highway Traffic Safety Administration gave the gas-only Pacifica a perfect five stars for its overall, frontal and side crash protection. The Pacifica Hybrid differs with a four-star frontal rating. The Insurance Institute for Highway Safety has not yet tested the updated 2021 Pacifica, though it did receive a Top Safety Pick award back in 2019.