To a James Bond fan, this is a very cool and important car. This 1969 Mercury Cougar XR7 up for auction by Bonhams was one of three used during the filming of 1969’s “On Her Majesty’s Secret Service,” the one-and-done film starring George Lazenby that’s a dark horse favorite among many Bond fans (this one included, there’s a Japanese-market ‘OHMSS’ poster hanging behind me as I type this). However, this was not James Bond’s car in the movie. He drove an Aston Martin DBS, including in the film’s pre-titles sequence when he follows Tracy di Vicenzo driving her bright red Cougar. She would go on to rescue him with it in Switzerland (hence the skis), sacrificing its pretty red paint and body work in a demolition derby on ice that they use to shake Blofeld’s Benz-driving goons. Later, after getting caught in a blizzard, they seek refuge in a barn — a pivotal scene in the film and one where this particular Cougar was apparently used.

However, even without the Bond connection, this Cougar is a very cool car. It was one of only 127 in 1969 to be fitted with the top-of-the-line 428 CobraJet Ram Air V8 rated at 335 horsepower. Tracy had a serious muscle car. Bonham’s doesn’t seem to have thought to provide a Marti report, but I’m guessing the build of XR7, convertible and a color combo of matching red exterior and interior wasn’t exactly a common one. Well, we know there were at least three. With skis and French number plates, too.

As for the ’69 Cougar itself, this was the only year it looked like this: it got a new body for ’69 that would last two years, but the horizontal grille slats that extended over the headlight doors (so cool!) didn’t carry over to 1970. It looked worse, and it could easily be argued that it was only downhill from here for the Cougar.

The auction is set for December 16 and Bonhams is estimating a sale price of between $130,000 and $200,000. That certainly makes sense given the rarity of a CobraJet Cougar, the film connection and the complete restoration undertaken by the man who found it in a classified ad in the late 1980s. He originally just wanted it for the engine until he discovered the Bond connection.

I actually saw this very car at the 50th Anniversary “Bond in Motion” exhibit at the Beaulieu Motor Museum in England back in 2013 (pictured below). There’s also a model of the thing sitting next to me. So yeah, if you’re wondering what I’d really want for Christmas … 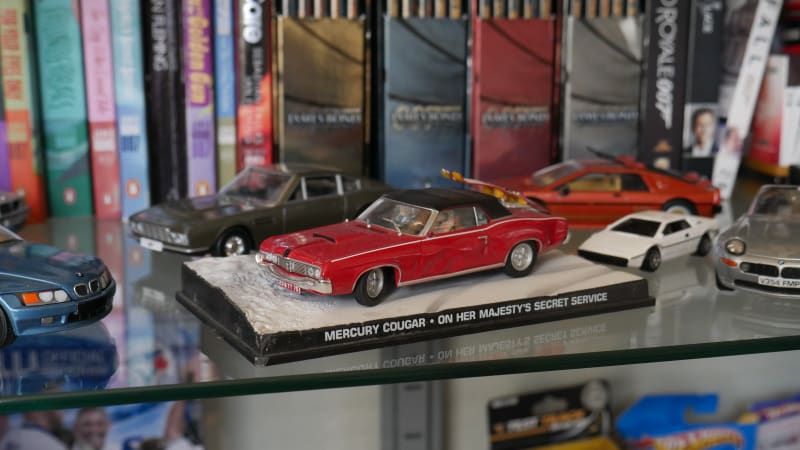