When Chrysler, or whatever they’re calling it these days, gets a vehicle right, it has no problem letting it ride for as long as possible. Updates and additions are the name of the game rather than clean-sheet redos. That’s exactly the case with 2021 Jeep Grand Cherokee, which represents the 10th year of a generation that got things right from the very beginning. Timeless style, well-rounded on-road manners, real-deal off-road capability, and a broad array of diverse models have kept it fresh, distinctive and competitive ever since. Key updates have helped, too, though there’s been nothing significant in the past two years.

The result is a midsize SUV unlike any other. The Grand Cherokee can just as easily compete with suburban-bound midsize crossovers like the Chevrolet Blazer or VW Atlas Cross Sport as it can the off-road-warrior Toyota 4Runner, luxurious Land Rovers and Lincolns, or the ultra-high-performance BMW X5M.

Of course, there’s no escaping that the Grand Cherokee is indeed 10 years old. Its various subpar safety ratings from the Insurance Institute for Highway Safety definitely show its advanced age, while its interior materials, design and technology aren’t up to Chrysler’s latest standards seen in the Wrangler, Ram 1500, Chrysler Pacifica and upcoming Grand Wagoneer. So while it’s still competitive, next year’s clean-sheet redo still will be welcome.

There are no major changes for ’21. The new Laredo X (pictured above in the lead slide) adds some extra luxury features at a reasonable price to the standard Laredo and there’s an 80th Anniversary Edition, based on the Limited, which comes with dark gray trim inside and out along with special badging (obviously) and the ProTech II package of driver assistance tech. You know, just like the Jeeps G.I.’s drove 80 years ago. What’s the Grand Cherokee interior and in-car technology like?

The Grand Cherokee’s interior is a bit of a mixed bag. In top-level trims like the Summit, it’s swathed in luxurious leather and wood trim, and in SRT and Trackhawk guise, its heavily bolstered seats and track-focused technology package feel like they were borrowed from high-performance Challenger models (because they were). But Grand Cherokee Laredo models at the lower end of the spectrum can feel plasticky and bare – a natural result when the model line is stretched across seven trim levels plus special sub-trims and packages.

Most Grand Cherokees bought by consumers will fall into the middle of the range. A 7-inch screen featuring Jeep/Chrysler’s excellent Uconnect infotainment system is upgraded to 8.4 inches around the point the vehicle crosses the $40,000 price threshold. This system also includes, and performs well with, Apple CarPlay and Android Auto. How big is the Grand Cherokee?

Size-wise, Jeep’s range-topping SUV is a bit of an odd duck. In terms of interior roominess, it lines up against style-first crossovers like the Chevy Blazer and Nissan Murano. In terms of functionality and likely cross-shoppers, the Toyota 4Runner is a better comparison, and the Grand Cherokee compares favorably with that SUV in headroom, shoulder room and legroom. However, its cargo space falls considerably behind the Toyota 4Runner, which also offers optional third-row seating.

In the real world, the 2021 Jeep Grand Cherokee seats four adults in reasonable comfort and has adequate cargo space for that quartet to pack enough stuff for a week away. That said, buyers who plan to take extended road trips and/or put a priority on cargo space might be better served by the 4Runner as well as more spacious crossovers like the Honda Passport and the three-row Kia Telluride.

Most Grand Cherokee models come standard with a 3.6-liter V6 engine hooked up to an eight-speed automatic transmission. This base powertrain’s 295 horsepower and 260 pound-feet of torque feels perfectly adequate for normal daily driving duties. With the exception of the Trailhawk, every V6-powered Grand Cherokee comes standard with rear-wheel drive. Four-wheel drive is optional, but there are different systems available with different capabilities. The EPA rates the V6 Grand Cherokee at 18 mpg city, 26 mpg highway, and 21 mpg combined. Four-wheel-drive drops the city and highway rating by 1 mpg.

A 5.7-liter Hemi V8 engine is a $3,295 option starting with the Limited trim, and is only available with four-wheel drive. It’s quite a bit more powerful than the V6 with 360 hp and 390 lb-ft, and predictably thirstier, too. The EPA estimates the V8-powered Grand Cherokee will get 14 mpg city, 22 highway, and 17 combined. Most buyers will find the V8’s extra power unnecessary (an exception would be those who tow), but it’s a unique selling point that Jeep’s most popular competitors don’t offer.

Delving further into unnecessary (but extremely fun) territory is the Grand Cherokee SRT, which comes equipped with a 6.4-liter V8 that spins out 475 hp and 470 lb-ft. It gets EPA ratings of 13 mpg city, 19 mpg highway and 15 mpg combined.

Finally, the truly power hungry can opt for the Grand Cherokee Trackhawk. With 707 horses and 645 lb-ft from a supercharged 6.2-liter V8, the all-wheel-drive Trackhawk rockets to 60 mph in just 3.5 seconds and can hit a top speed of 180. Remember: this is an SUV, not a sports car, though that line feels a bit blurred in this case. If you’re wondering about fuel economy, the Trackhawk is not for you.

Properly equipped, the Grand Cherokee can tow as much as 7,200 pounds (or 6,200 pounds for rear-wheel-drive versions).

Although it isn’t built atop the guts of a pickup truck, the Jeep rides rougher and handles worse than crossover competitors like the aforementioned Chevy Blazer, VW Atlas Cross Sport and Kia Telluride, but is smoother and offers more luxury than the Toyota 4Runner. Remember, though, that there are many different and highly disparate versions of the Grand Cherokee designed to tempt buyers with off-road or track-day aspirations. We’d recommend trying several to determine which is the best fit for you, paying attention to different wheel sizes, suspensions, engines and four-wheel-drive systems.

Among those versions is the extra off-road-oriented Trailhawk trim, which boasts skid plates for the front suspension, fuel tank, transfer case and underbody. Its Quadra-Lift air suspension system provides up to 10.8 inches of ground clearance to go along with approach, departure and breakover angles that only hardcore trail users will ever appreciate. And in SRT or especially Trackhawk trim, the Grand Cherokee has more power, more roadholding grip and superior braking performance than any other SUV or crossover within $30,000 of its price.

What more can I read about the Grand Cherokee?

Our first drive of the overpowered Trackhawk, complete with our impressions after some time at the race track. 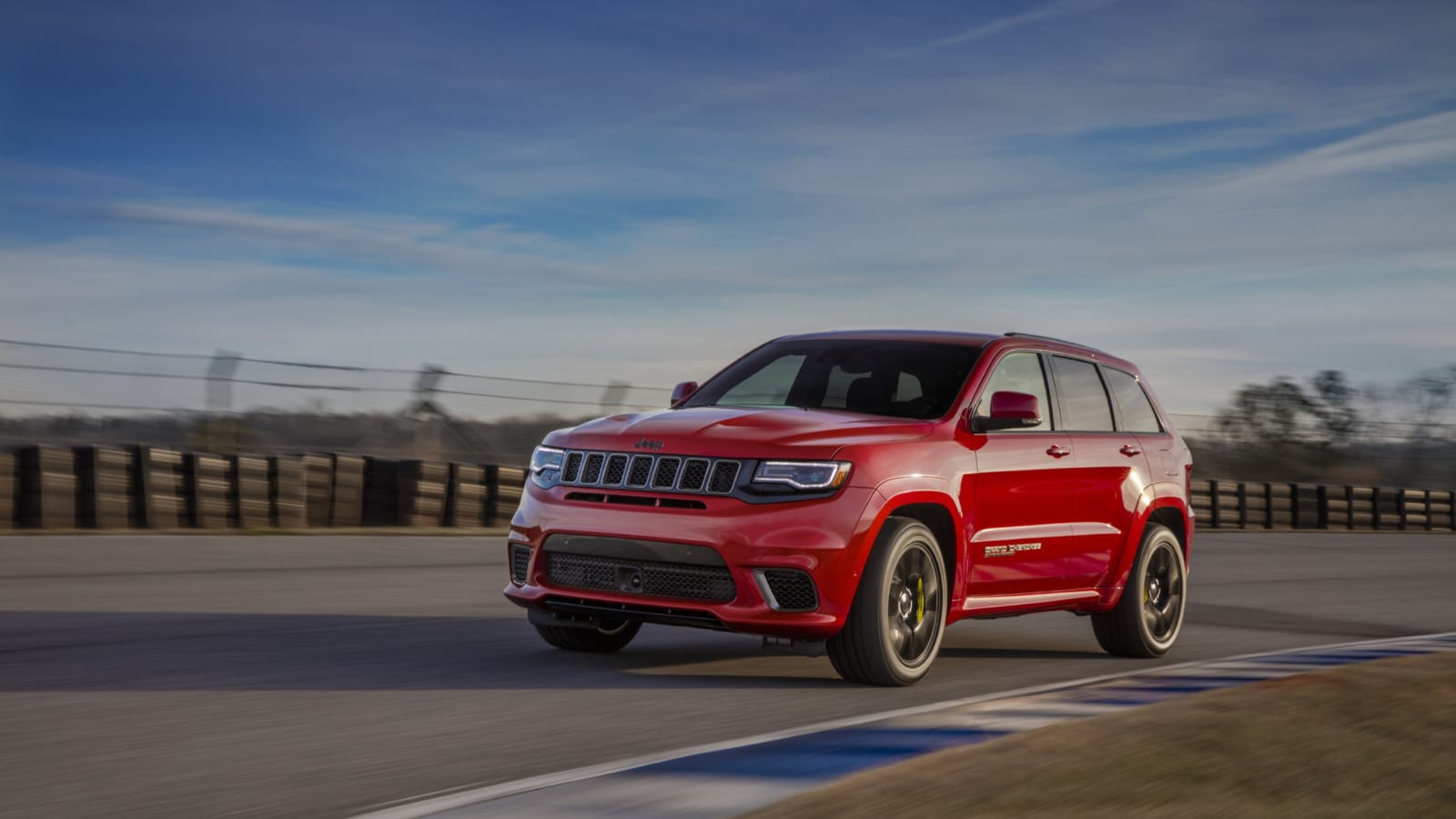 Our first limited stint behind the wheel of the off-road-oriented Trailhawk. We venture off the beaten path with a camera crew along for the ride.

As far as 2021 Jeep Grand Cherokee trim levels and features are concerned, buckle up; there’s a lot to discuss.

The Trailhawk adds in all of Jeep’s off-road bits and pieces for $46,870 and comes with four-wheel drive standard.

The Overland essentially turns the Grand Cherokee into a luxury vehicle and starts at $48,210. The full-luxe Summit model starts at $54,210.

The powerful SRT model starts at $70,660 and again comes standard with four-wheel drive. The maxed-out Trackhawk with its 707-hp supercharged engine pegs the needle with a sticker price of $89,165. That’s a big chunk of change for a Jeep, but it’s tens of thousands of dollars less expensive than a BMW X5M or Porsche Cayenne Turbo.

You can find a full breakdown of the various trim levels’ features, specs and local pricing here on Autoblog.

The Insurance Institute for Highway Safety found room for improvement when it comes to the Grand Cherokee’s safety performance. While it earned top marks in some categories – such as side impact crash tests, and front crash avoidance (when fitted with optional safety equipment) – the Grand Cherokee only managed “Marginal” and “Poor” ratings in the Small Overlap Front test, which simulates a vehicle hitting a static object like a utility pole with only a small part of its front end. The headlights found on most trims also got “Acceptable” ratings, while its LATCH anchors were deemed “Marginal” for their ease of use.